As avid readers and listeners can attest, I take any anime series based around music very seriously; perhaps too seriously in some cases. In my mind a music anime needs to have itself a good balance of fine storytelling and songwriting. Some series like Love Live and Nana can pull it off, showcasing a blend of wonderful melodies heard throughout a well thought-out plotline. Then there are those that fail at one but succeed better with the other, like K-On!'s great soundtrack that was bricked by a poor story. And as much as I would like to forget about it, some shows like Super Sonico: The Animation can royally screw up both aspects in very catastrophic ways.

This leads me to the newest anime to come out of this musical category: Show By Rock!! After sitting down and watching this anime week-after-week, I am left incredibly perplexed. Just what does this series wish to achieve? Does it want to be a rock 'n' roll show, or does it wish to be another case of moéfied girls doing cute things in the place of actual plot? In all honesty I believe Show By Rock!! is having a very bad identity crisis. 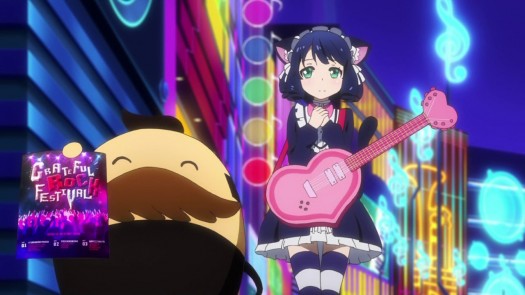 Let's first look into what this anime is about. Based off of a mobile game collaboration of Sanrio and Geeches, Show By Rock!! centers on a girl named Cyan (Eri Inagawa), a high school student that finds herself transported into a world called Tokyo Midi City. There she becomes a Gothic Lolita cat girl, whose new guitar can take on monsters and snarl like the most hardcore of Japanese punk rockers. Intrigued by her talents Cyan is recruited into a band called Plasmagica, whose members ChuChu (Sumire Uesaka), Retoree (Manami Numakura), and Moa (Ayane Sakura) are seeking to be the best band in all the land. But when a mainstream record mogul seeks to control the world and crush the hopes & dreams of any aspiring musician it's up to this "rock 'n' roll" quartet to give it their all to be noticed.

As the story progresses Cyan meets various bands seen as either allies or rivals, such as the visual kei-inspired Shingan Crimsonz and the school-taught rockers Cristicrista. Band managers like the egg-shaped Maple (Yuji Ueda) add emotional support to those artists they work with, although they can be seen are more comic relief rather than actual spiritual guidance. What this anime gets right is its character evolution, as Cyan starts off as a shy schoolgirl who couldn't make friends to save her life. Now after finding herself stuck in this alternative world the young girl has built her confidence up to be a force of nature in an up-and-coming musical act. Still she has her doubts, much like most musicians who seem to have success riding about at every corner. 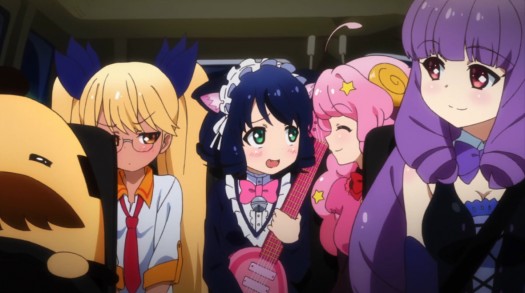 I was quite surprised to find out that Studio Bones had a hand in animating Show By Rock!!, as a premise such as this didn't seem to be in their field of range. Yes, they're no strangers to series with cute mentalities (as evident in the brilliant adaptation of Ouran High School Host Club), but the kawaii factor here is far too powerful. However animation-wise the show looks great, from the overall look of the characters to the bright sights of the city. An episode dealing with a yokai-inspired vicinity showed an impressive amount of detail, especially in regards to the creepy (albeit nice) townsfolk that reside in it.

There is a bittersweet feeling I get whenever the show switches into CGI realm during both concert segments and battles. This is probably the best computer animation I've seen in an anime series, with the characters' movements flowing as solid as something from a Dreamworks Animation production. With that being said, why aren't these moments done in a traditionally animated setup like the rest of the series? Is it far cheaper to animate it this way, or do they believe it fits with the style of the show? If it's the latter, then their way of thinking is kinda off. 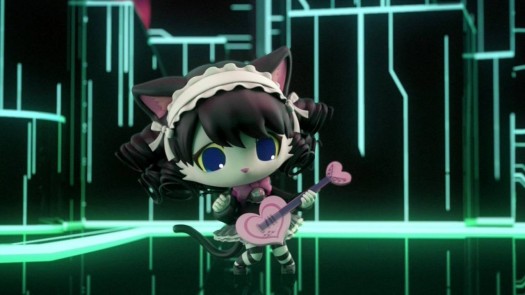 Let's now jump into what you're probably waiting for me to comment on: how Show By Rock!! sounds. First let me just say that I think the voice acting is great, with Inagawa's take on Cyan a fine blend of optimistic intentions that are somewhat pushed down with a coy sense of doubt. Uresaka and Numakura also do a wonderful job with their portray of ChuChu and Retoree, although I will say that Sakura's Moa is the most fun and adorable to listen to out of the bunch.

As for who acts as the anime's showstoppers, there are two people you can look towards. The first is Hiroyuki Yoshino, whose voice of Cyan's guitar Strawberry Heart had me do a double-take. He growls like Seiji of Guitar Wolf, backed with a motivation that can be found in the likes of Yuusuke Chiba from The Birthday. As for the other spotlight hogger, look no further than Kishō Taniyama's Shingan Crimsonz frontman Crow. He's funny, nasty, and simply an acid-spewing rock star with hints of Keith Richards and Pete Doherty running through his attitude. 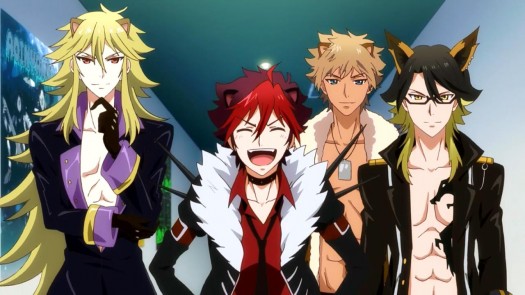 Lastly we've come to what Show By Rock!! wants to center itself around: the music, which its quality comes in a very, very mixed bag. First the good: Shingan Crimsonz and their somewhat rivals Trichronika really do rock hard. We're talking 12012 and X Japan-quality sounding melodies that attempt to burst your eardrums and then expect a thank you card for doing so soon afterwards. Trust me when I say that Shingan Crimsonz should've been the actual focus of this anime, as not only are they more interesting to watch in action, but they sound exactly how a Japanese rock band should.

Sadly you'll need to take the good with the bad, and boy does Plasmagica do it terribly. The songs are way too poppy to be considered rock music (hence why the specific genre of music was put in quotation marks above), and with them being the main band of the series that can be a very big problem. Even worse is that the anime band's music bookends the show with two pretty awful songs: the opener "Seishun wa Non-Stop!" and the closer "Have a Nice Music!!" While Shingan Crimsonz's melodies will blow your hearing from pure awesomeness, Plasmagica's music will make you wish for deafness. 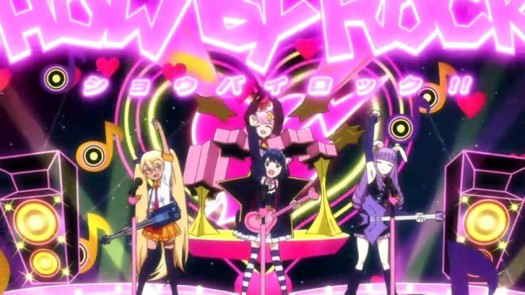 Show By Rock!! has its ups and downs. It's got likable characters and a fairly good storyline that will keep viewers enticed. On the other hand it has some pretty strange and unneeded computer animation with songs that can range from great to just godawful. Depending on your mood you'll either want to plug in and play with what Show By Rock!! has to offer, or find the next groove on the vinyl and move along to the next track that may entertain you.

Show By Rock!! can be viewed on FUNimation.com and Hulu, and has been licensed by FUNimation Entertainment. Episodes 1-7 were observed for this review.