HomeSketchesDLC REVIEW | "Saints Row IV: How The Saints Save Christmas"

DLC REVIEW | "Saints Row IV: How The Saints Save Christmas" 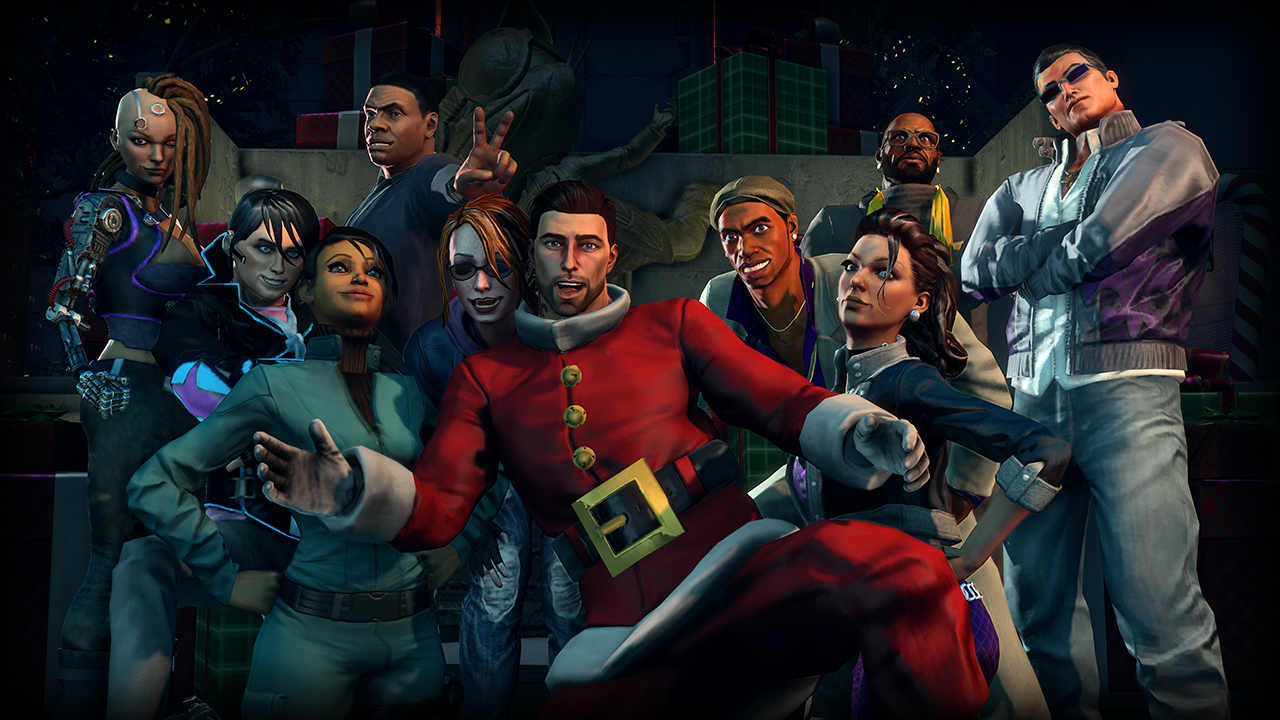 DLC REVIEW | "Saints Row IV: How The Saints Save Christmas"

Up in the sky, way yonder afar
Shone a bright beacon like a big star
But on closer inspection this rock was a ship
Filled with our heroes that are as crazy as hip
The Saints, as they're called, had settled on down
After days upon days of saving their town
Real Steelport is gone, but VR one still stands
And this here faux world they've claimed as their land
Zinyak is dead thanks to our purple pals
Who've brought hopeful smiles to all guys and gals

Months have passed since, and so has arrived
This holiday season that makes all feel so alive
The ship has been tinseled, the tree's been lit
But the Saints leader just didn't give a shit
His eyes no longer twinkled like a young strapping boy's
No, our hero, it seems has lost all of his joys
As Pierce and Johnny sang carols so loud
The Leader sat sad, feeling gray as rain clouds
Mackenzie walked over, and asked him "What's wrong?"
And the leader, with Deadpool voice, broke into a song:

The sadness fell over the leader’s dear friends
As they realized this Christmas didn’t follow past trends
But before their yuletide feels took a big dip
There came a-knockin’ from outside the ship
It startled the Saints, as they wondered who it was
And as the door popped open, there stood Santa Claus
“Merry Christmas, Saints of Steelport!
I come bearing a gift that I said I'd transport!”

“Hot damn, it’s Saint Nick!” shouted Matt Miller
Pierce uttered, “Our Christmas is about to get iller!”
“I bring a new mission, one so important
That if not passed, the kids will be in torment!”
“Pray tell, what’s the mission?” asked the Saints Leader
Who in a flash once again became a believer
Santa said, “One that will push you towards the distance
This mission is called How The Saints Save Christmas!

“I’ve been trapped inside of this simulation
After being kidnapped from my secret sleigh station
But you, dear leader, must soon discover
That Christmastime is like no other
So go out and rescue me, for what’s left of the Earth
I swear it’s as fun as my belly’s got girth!”
“We shall,” said the Leader, and not a moment too soon
Went into fake Steelport to save us from holiday doom

With the help of future Shaundi the task was at hand
To stop an evil Clawz from fulfilling his plan
Ringing bells and finding films to warm up the spirit
Even though the Leader didn’t quite wanna hear it
They then must travel to the North Pole,
Where chaos ensued amongst every living soul
The reindeer lie dead, and the elves have committed a coup
To make sure that Christmas bids a final adieu

Then comes the time to deliver some presents
For all children, whether they’re nasty or pleasant
And once all cheer comes back to the town
You’ll meet with the Clawz, and then take him down
“Well, was it fun?” asked jolly Saint Nick
The leader responded, “It was quite the kick!
But what about the one whose opinion matters most?
Just what do you think he will certainly post?”

They looked up to the sky, as if asking God
Santa uttered, “We’re asking you, you narrating clod!”
I flinched as I saw they were talking to me
Johnny said, “It was great! Don’t you agree?”
Well it was certainly cool, and the mission was fun
And I definitely loved playing with new guns
The script was well-written, and the laughs had me rolling
Like the very first time I played Elf Bowling

That said there were a few bad glitches
And, trust me, restarting missions is but for the bitches
But one day there will come a patch
That’ll fix it all up like a flick of a match
New homies to roll with, new cars to drive
Ones that will keep the holiday spirit alive
For six bucks the DLC has so much worth
Hilarity will ensue for gamers all over the Earth

But what of my score, how will I rate it?
Do I give one that’s mediocre, or declare it a hit?
Fun for two hours, side-splitting laughs
And a mission that is certainly a blast
And after playing this Christmas cheer Volition made
I feel as if I can send this off with my grade
So with that that, my review must come to an end
By giving this DLC an eight out of ten!

And now, for a very special treat
Here's an audio version that cannot be beat
Right-click to save in a big folder
And keep it to play as you get older