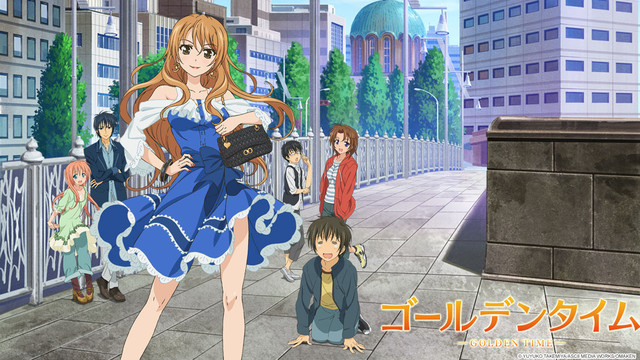 Yuyuko Takemiya had a runaway hit with his light-novel series Toradora!, which spun an equally-popular anime series and a couple of Japan-exclusive video games. Now that the story of Ryūji and Taiga has met its end Takemiya fixed his focus on a different kind of romantic comedy, one dealing with another sort of tragic character and filled with moods that swing in all kinds of directions. That story is Golden Time, whose anime adaptation premiered this fall.

Golden Time focuses on Banri (Makoto Furukawa), a new college student studying at a law school in Tokyo. He befriends Mitsuo (Kaito Ishikawa), who decided to study at the law school not just for a career change, but also to escape his crazy not-girlfriend Kaga (Yui Horie). However Kaga appears to not just congratulate Mitsuo with a bouquet of flowers across the face, but to announce that she will be going to the same school as well. Mitsuo begs Banri to keep Kaga distracted so he can have a normal college life, with the two of them sprouting a strange friendship.

Later Banri meets Linda (Ai Kayano), a woman who not only saves him from the grasps of crazy college club recruiters, but also shares a past with him. However he cannot remember Linda, as he lost his memory in an accident after graduation, with his spirit secretly following him around as Banri tries to figure out who he is, and if he even wants to revert back to his previous self. It's a journey that he may have to face alone, even with his new friends buy his side.

Golden Time is the type of show that likes to go back and forth between its comedic and dramatic elements, like a scale constantly being thrown weight amongst its two sides. One moment you'll be laughing as Banri is being dragged into the Tea Club party and forced to sumo wrestle when he declines a drink. The very next scene you may see him open his heart to Kaga, who rejects him in the most lukewarm-hearted way. It's an anime that knows how to tie your feelings into various knots, almost to the point of mental strain.

One episode that will be up for confusing debate is the third one, where Banri and Kaga are taken to what looks like a college club, only to find out they're trying to be recruited by a weird religious organization similar in vein to a certain one Tom Cruise belongs to. I remember watching this specific episode, and thinking that I've been tricked into watching a totally different anime. It didn't mesh well with the other episodes, perhaps because of the serious tone they decide to take to cover this matter instead of the usually humorous one we see in a show like this. It's also the moment where Banri reveals to everyone about his amnesia, which would've made a great plot twist moment had the audience not been told this aspect in the previous episode. Maybe it's just being picky with the storyline, but it didn't quite grab me in the way I reckon Takemiya wanted it to.

With that being said I really love the characters in Golden Time. Banri is a strong tragic character, not in a Shakespearean sense, but rather in more of a slice-of-life essence that doesn't teeter into a soap opera mentality. Kaga can be a bit cold, but at the right moments, when needed, she can become the warmest of characters that can be there for Banri. Mitsuo, despite his friendliness with Banri, can be a jerk on many occasions, and usually when he acts out that way he gets his comeuppance in a method that would get a chuckle out of anyone. All of these characteristics are captured to a near-perfection from the voice actors and actresses portraying them. As of right now, though, it's tough to judge the character of Linda. You know she has a good heart, but with her keeping the secret of knowing Banri before the accident it's questionable as to where her heart truly lies.

J.C.Staff once again proves itself to be the best TV anime production company around, with much attention to detail brought to the characters and the Tokyo cityscape surrounding them. (They were also responsible for the Toradora! anime adaptation.) When it comes to the show's comedic elements the animation captures these zany moments wonderfully and hilariously. As for the dramatic periods they do a fair job with showcasing the most important aspects of the situation on hand, although they aren't as vivid as its humorous counterparts.

Yukari Hashimoto's original score wraps the scenes around like a warm blanket, and while it's not as captive as her Toradora! score it does the job well of illuminating the emotional elements that Golden Time has. The opening and ending theme, both performed by Kaga's voice actress Horie, are very well-produced, although I prefer the end song "Sweet & Sweet Cherry" than I do the opening "Golden Time." Horie's proven herself to being as strong as singer as she is a seiyuu, and while her style may not have evolved during her tenure they stand as strong as the works she's done for anime in the past.

Can Golden Time be a tad bipolar? Absolutely! However the show's biggest strength is finding that balance between drama and comedy, even if the weight drastically shifts without warning. Still only time will tell if Takemiya will hit the heartstrings the same way Toradora! did. For now, though, Golden Time is a wonderful anime series that, while still oiling out its gears, is ticking away loudly, with all hands pointed towards a good, well-thought out story in the long run.

Golden Time can be viewed on Crunchyroll. Originally posted on the ESH EGMNOW Page.