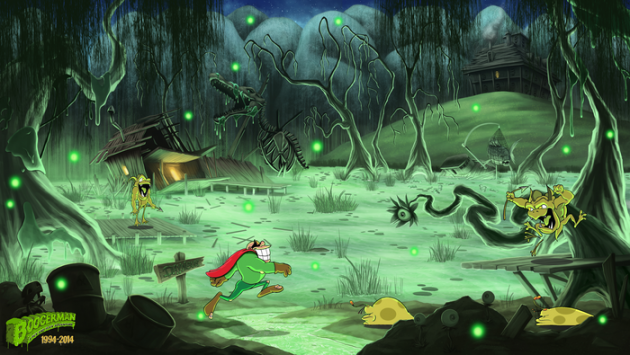 Growing up on the likes of Ren & Stimpy, Beavis & Butt-Head, and Rocko's Modern Life I came to the notion that anything related to farts, burps, and snots were all I needed for total entertainment. In 1994 a video game on the Sega Genesis caught my attention because it had all that: Boogerman: A Pick and Flick Adventure. Not only did it had all those gross things that gave me a chuckle in my belly, but it also contained some fantastic gameplay and challenging opposition. Boogerman was a video game that still stays close to the Genesis-era section of my heart, and will even say that it was one of my favorites.

Now, twenty years later, the creators of Boogerman are looking to do it again with Boogerman 20th Anniversary: The Video Game, and they need our help.

Creators Mike Stragey and Chris Tremmel announced via Kickstarter Wednesday that they are trying to raise $375,000 by November 20th to make this new Boogerman title happen. More of a reboot than a remake Boogerman 20th Anniversary will revisit the six worlds of Dimension X-Crement to battle the evil Booger Meister and his Snot Goblins. Throughout the game, you will be aided by Professor Stinkbaum with brand new gadgets such as the Snot Whip, the Snot-so-Silent-Butt-Deadly Fart Copter, and many others later to be announced.

Helping make the game a reality with Stragey and Tremmel are composer Grant Kirkhope (Banjo-Kazooie, Perfect Dark) and writer Jordana Arkin (Will & Grace, What's New Scooby Doo). Boogerman 20th Anniversary plans to have 18 full levels, 36 bonus areas, and 6 bosses (although more could be added depending on how much is raised).

"We have talked about doing a new Boogerman for years and now thanks to Kickstarter, the timing feels perfect!" said Tremmel. "Mike and I are now 100% dedicated to this project and with your help and support we will be able to "re-boot" the franchise and bring a brand new Boogerman to the latest and greatest gaming consoles for all to enjoy."

To check out the fill list of Pledge Bonuses and to help make Boogerman 20th Anniversary a reality, check out the official Kickstarter page.