HomeAnimeYounger Miyazaki Gets It Right In Sophomore “Poppy Hill”

Younger Miyazaki Gets It Right In Sophomore “Poppy Hill” 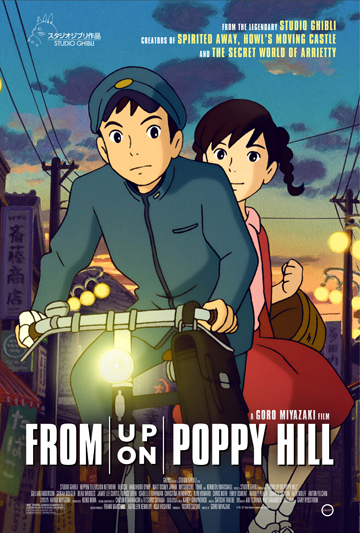 Younger Miyazaki Gets It Right In Sophomore “Poppy Hill”

It's no secret that Goro Miyazaki had to go all out for his next film. His first foray into anime, Tales of Earthsea, was not just a disappointment, but the worst film made in the Studio Ghibli library. Fortunately, thanks mostly to his famous dad, he has learned from his mistakes, and instead of taking the fantasy realm head-on he chose to helm a realistic slice-of-life period piece: From Up On Poppy Hill.

Taking place near the start of the 1964 Tokyo Olympics Poppy Hill follows the story of Umi (Sarah Bolger), a high school girl who each day raises a pair of signal flags, in hopes that her father will one day see them. She runs a boarding house while her mother (Jamie Lee Curtis) is studying abroad in America, and makes sure her fellow housemates are well-nourished and ready for the day. One day Umi discovers a poem in the paper regarding her flags, and wonders who wrote it. The person winds up being a fellow classmate of hers: Shun (Anton Yelchin).

Shun and his cohorts from the school's Latin Quarter are fighting the administration to keep their beloved -- albeit old -- building from being demolished. Umi, thanks to her friend, is pushed into helping Shun with the school paper, and upon hearing more about the dilemma decides to help with the Latin Quarter's cause. She recommends sprucing up the building, with hopes that maybe if it looks better it will be saved from demolition. Shun and Umi become determined to make sure that doesn't happen, while at the same time becoming emotionally closer. However when Shun finds out that Umi has the same photo of her father, he begins to question whether or not they might be blood-related, and that love between the two of them may never be in the cards.

Episode CLXXX: The Trance Word Is...