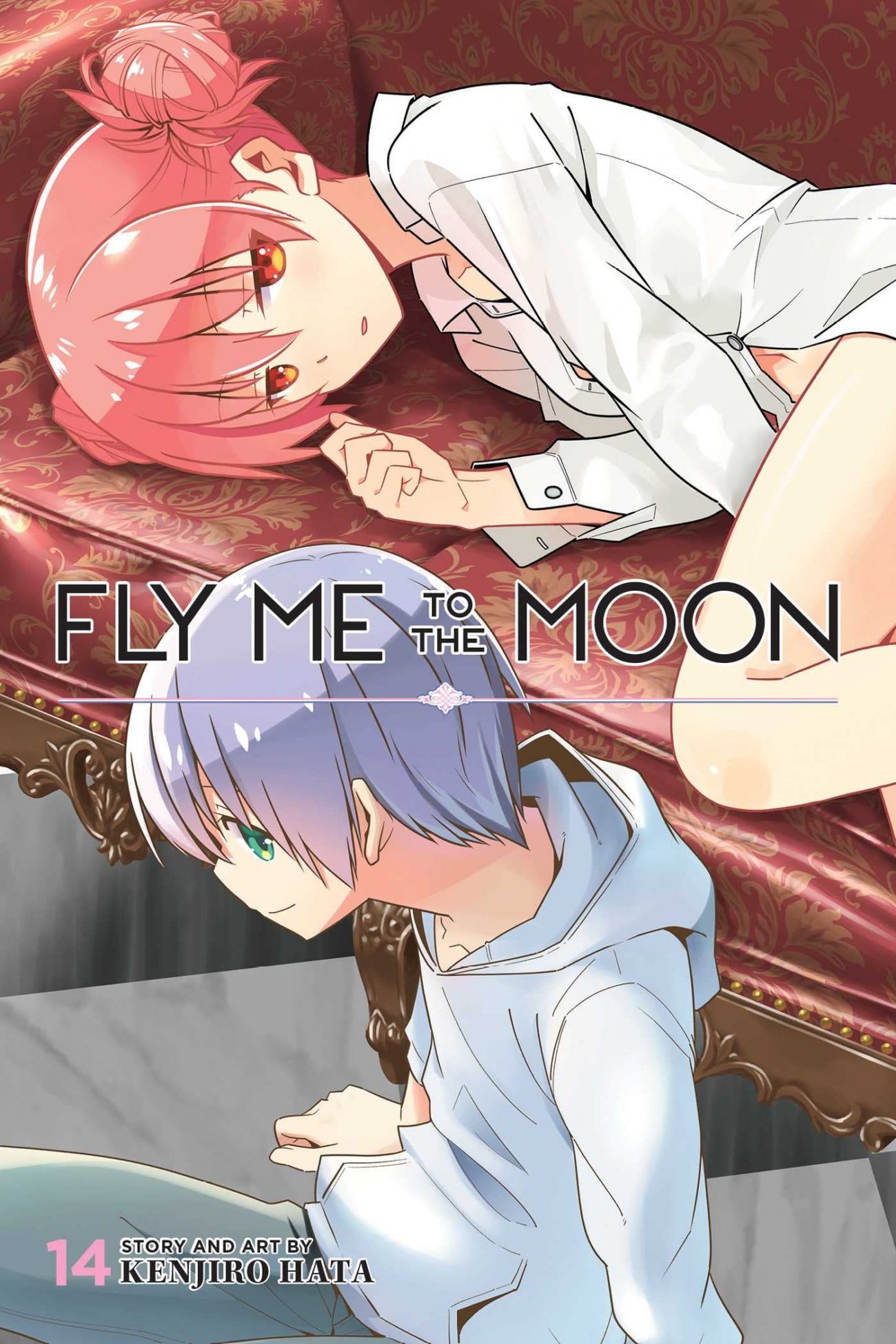 What is the manly way to show affection? For some, it’s carrying their loved ones up a flight of stairs romantically. Other men may go out and buy expensive things or experiences, although showing love with cash is so damn tacky! When Nasa from Fly Me to the Moon shows his manly affection in Volume Fourteen, he…meows like a cat? Oh boy, he needs some work.

But before we get to that, Nasa, Tsukasa, and their friends are still stuck in the haunted Hayate the Combat Butler mansion. (Note to VIZ Media: finish publishing that one!) Watching from monitors, Kaguya launches all of their traps and mechanical puppets, of which Tsukasa seems unfazed by. Quite the contrary: it wakes up the warrior inside of her! As she fights them, Nasa can’t help but realize that Tsukasa’s not just a cutie. (Hmm…sounds familiar.) 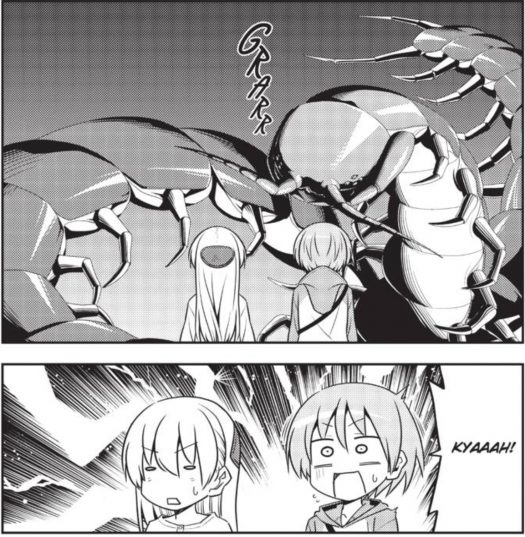 Meanwhile, Aya uses her video game skills to figure out puzzles, much to the surprise of the narrator. But it’s a race to save someone from a rickety Ferris Wheel when the stakes are raised. However, Tsukasa finds herself battling one-on-one with Kaguya, with neither person having the memory of one another. This then leads towards a question: if they can’t remember one another, then why the animosity?

Slowly but surely, Fly Me to the Moon is showing more of Tsukasa’s past. Her fighting skills reveal that she had to have battled someone long ago, and perhaps it might’ve been Kaguya. But why no recollection of one another? Is a part of themselves locked away in their minds, and if so, what will be the key to revealing it? It’s not clear why they must fight, but as the story goes on, perhaps more of their back stories will be put on display. 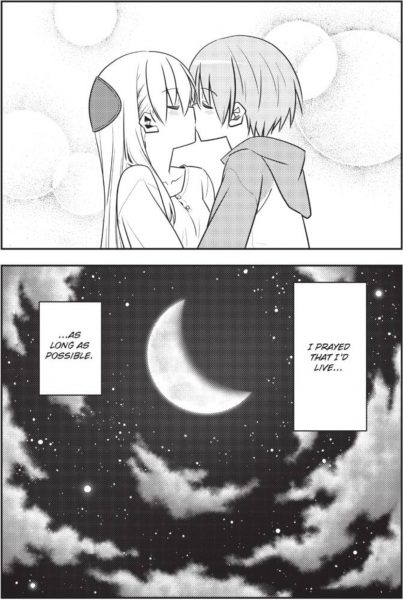 After the haunted house story, Kenjiro Hata brings his characters back to what they do best: humorously love one another. One night, Tsukasa asks Nasa to show some masculine affection towards her. It results in some funny trial-by-error situations, with Tsukasa blushing at Nasa’s every attempt to be loving. But then, a realization occurs awhile after: as Tsukasa ever said she loved Nasa?!

Although Asian customs of saying “I love you” may be different from those in the West, couples never go their entire lives without saying those three words. However, Tsukasa has a very hard time saying them, as Nasa tends to handle the thunder & lightning in every heartfelt moment. It results in Tsukasa trying everything in her might to utter those words. However, all she can do is say that she’s wearing sexier underwear to her man, which — according to my research — is a lot more embarrassing to say than “I love you”! 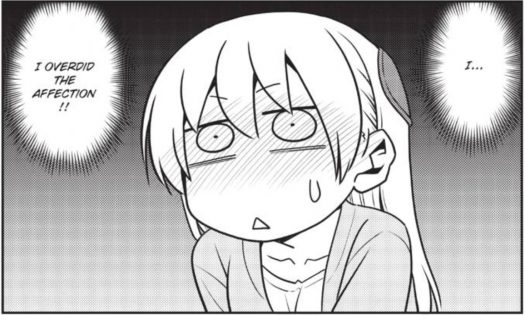 Fly Me to the Moon knows how to balance cute and sexy, thanks to Nasa and Tsukasa’s mannerisms. Volume Fourteen demonstrates those strengths well, on top of Tsukasa’s surprisingly good fighting skills (albeit with horrible acting). It may take some more time to figure out her deal, but knowing Nasa, he’ll be fine with whatever speed bump happens between him and Tsukasa. I mean, it’s not like she has to go live on the moon, right? RIGHT?! 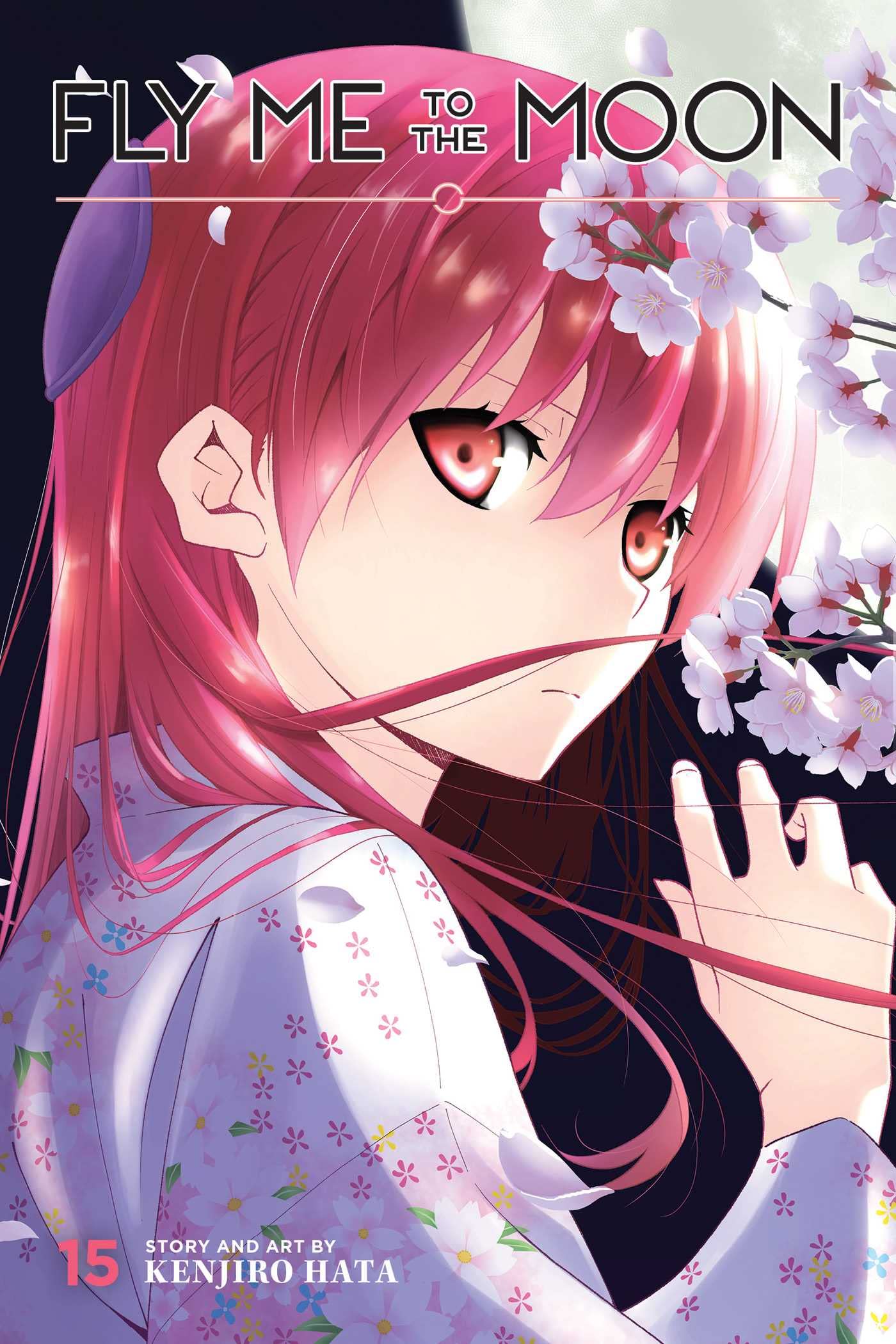 Volume Fifteen marks the end of the first part of Nasa and Tsukasa’s tale. And in a shocking turn of events, it reveals plenty of the truths that had yet to be uncovered. Who is Tsukasa really? What’s her relation to The Tale of the Bamboo Cutter? Why is there a moon rock at Tsukasa’s family’s residence?

Each one of these questions is answered in a careful fashion, something that a comedy like Fly Me to the Moon normally doesn’t do. Yet here, considering the stakes of Nasa and Tsukasa’s hearts, it works surprisingly well. It starts with Nasa’s memory of his first kiss with Tsukasa in the church many chapters back. Just one problem: that wasn’t really their first kiss, and Nasa has no idea what Tsukasa’s talking about! 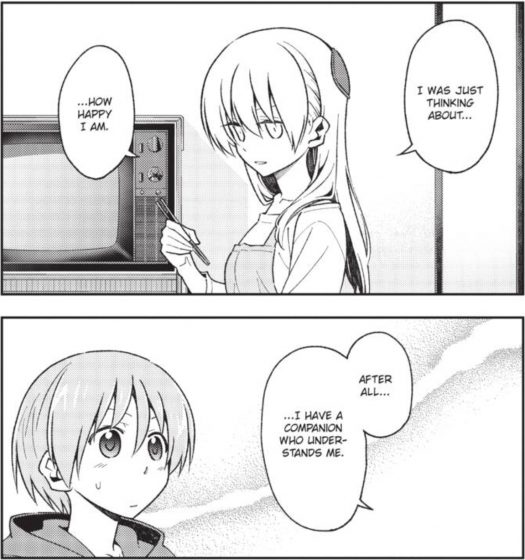 It becomes a race for the true memory of that first night, when Nasa was saved by Tsukasa and declared that he’d marry her. But because he got banged up pretty good, only half of his memory is intact. Even when Kaguya literally tries to beat it out of him, Nasa has so much trouble remember what had actually happened. And that leaves him terrified, knowing full well that it could jeopardize his relationship with Tsukasa.

This love between Nasa and Tsukasa is a strong one, and throughout its first fourteen volumes, we’ve witness how any couple should act with one another. But Volume Fifteen of Fly Me to the Moon shows that even perfect couples have a crack in their foundation. The memory of the first kiss is that crack, and Nasa having no recollection of it is like the world ending for Tsukasa. After all, it’s when Tsukasa tells her life story! 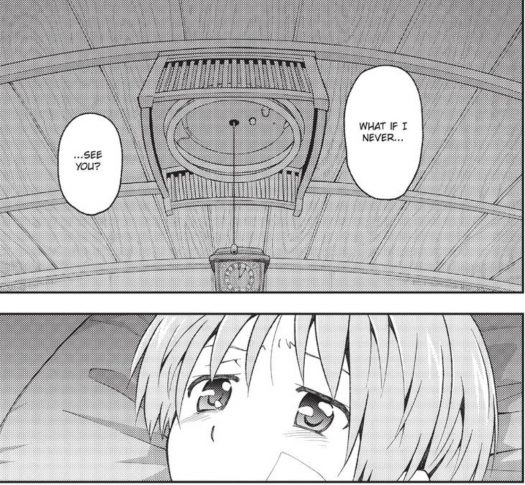 Despite him not knowing the full memory, Nasa does all he can to keep Tsukasa from leaving his side. He speaks of expanding universes, planets, and how everything is pulled together by a certain force. And in his own way, Nasa talks about how they’re like two planets in a universe of love, as he spouts science like Shakespeare spouted sonnets. And then, the memory he thought he had forgotten returns.

And there, Fly Me to the Moon answers every question we’ve been asking since the beginning. Tsukasa’s true self, her age, and why she knows so much about ancient Japanese history are laid out in a beautiful memory. Kenjiro Hata’s strength may be in comedy, but he really has been hitting the gym of love whenever he has time to do so. It’s all a grand finish to what has been a fantastic…two months of marriage? (Really? It’s only been THAT long?!) 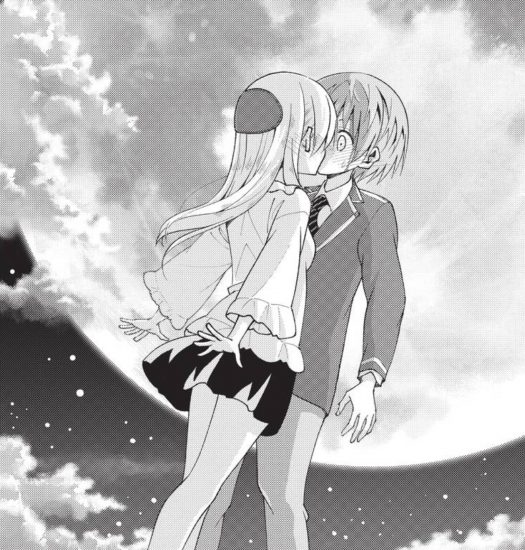 In any case, Fly Me to the Moon finally gives us everything we have been wanting to know. Volume Fifteen ends one massive chapter of Nasa and Tsukasa’s life together, in a way that’s both funny and heartfelt. But now that we know what’s really going on, where exactly can Fly Me to the Moon take us now? Well, dear readers, I suggest you look up to the sky at night, as that bright moon above will no doubt hold that answer for us.