HomeAnimeANIME REVIEW | Building Everlasting Friendships in "Do It Yourself!!"

ANIME REVIEW | Building Everlasting Friendships in "Do It Yourself!!" 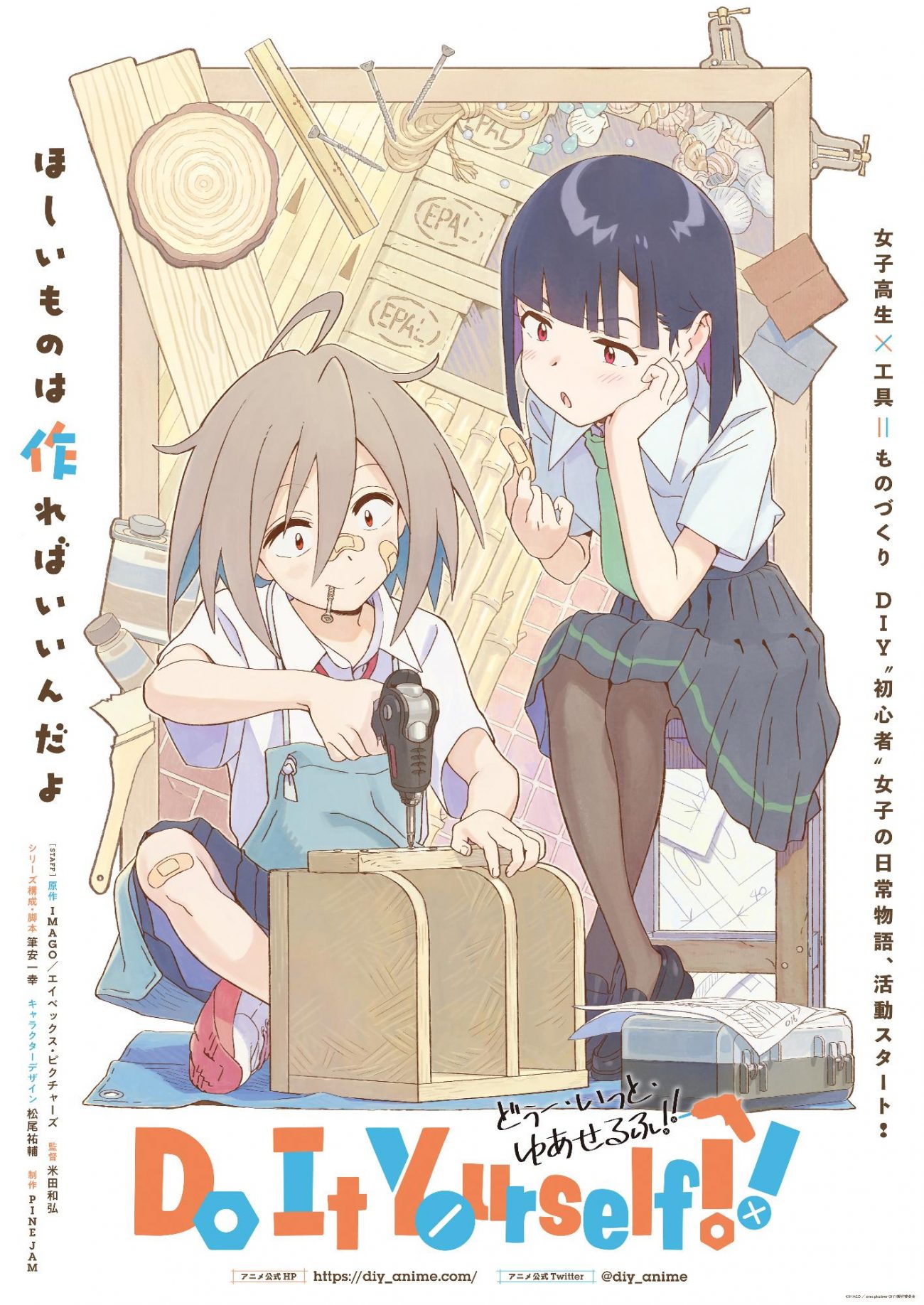 ANIME REVIEW | Building Everlasting Friendships in "Do It Yourself!!"

It’s one thing to just buy something lovely; to make it is a different ballgame all-in-all. Sure, there may be some rough spots on the final product, and you may be prone to injury here and there. But in the end, what matters is that you brought it into existence with hard work, dedication, and maybe a friend or two helping you along the way. That feels like the overall message of Do It Yourself!!, the latest anime series from Pine Jam (Just Because!).

An original series from Avex Pictures and IMAGO, Do It Yourself!! follows Serufu Yua (Konomi Inagaki), an injury-prone high schooler with a perfect attendance record at the nurse’s office. Her friend Miku “Purin” Suride (Kana Ichinose) is mad that Serufu got into the lesser Gatagata High School, whereas she got into the most pristine Yuyu Vocational. But the error winds up working out for Serufu, when she stumbles on the DIY Club, headed by third-year Rei “Kurei” Yasaku (Ayane Sakura). Soon the world of arts & crafts opens for Serufu, who aims to fill the club with many new members. 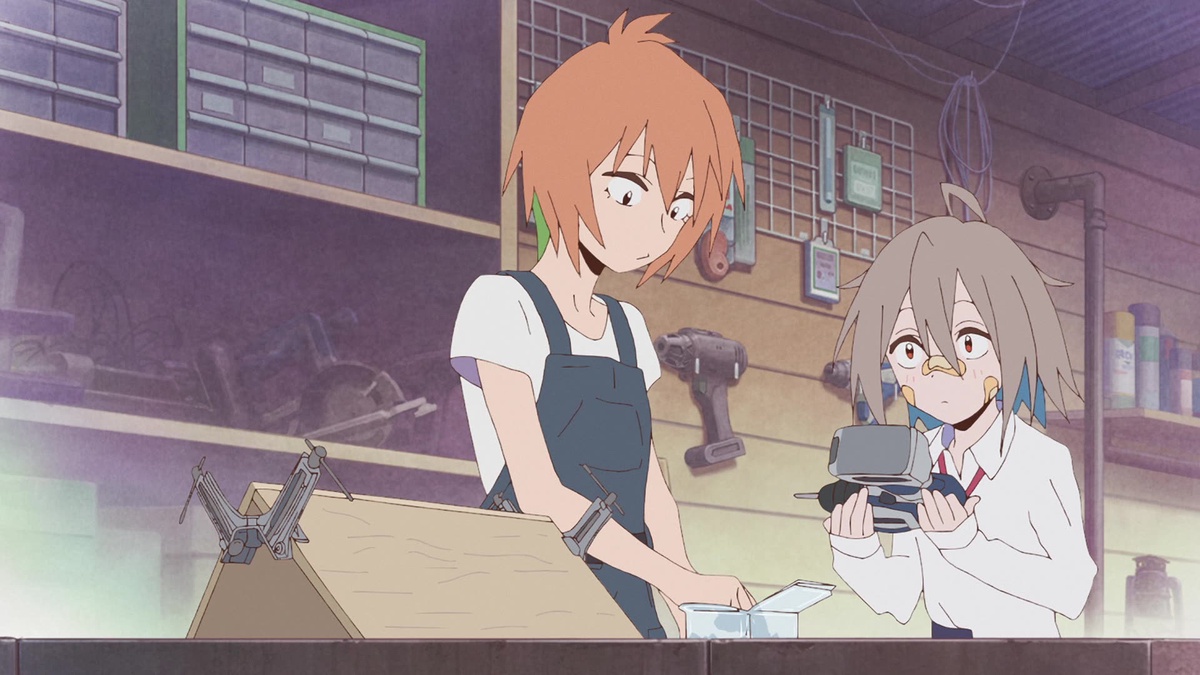 The process starts off slow, with Serufu’s classmate Takumi Hikage (Azumi Waki) being the first to come along. American transfer student Juliet “Jobko” Queen Elizabeth VIII (Nichika Ōmori) arrives next, having enrolled in Gatagata by accident instead of Yuyu. Miku’s classmate Kokoro “Shii” Kōki (Karin Takahashi) also enters the foray, despite not being a proper student. But when the club finds itself combing together to reach a certain goal — a treehouse — the magic of crafting and togetherness begins to fill the school air.

It’s easy to brush off Do It Yourself!! as another “cute girls doing cute things” kind of anime. However, where it succeeds to break away from that trend is the pacing of the series. Throughout the show, viewers will see the DIY Club crafting items from shells to jewelry, and it’s not all done with a wave of a magic wand. Instead, the club members dedicate themselves to their crafts, working step-by-step carefully to make sure everything is in order. 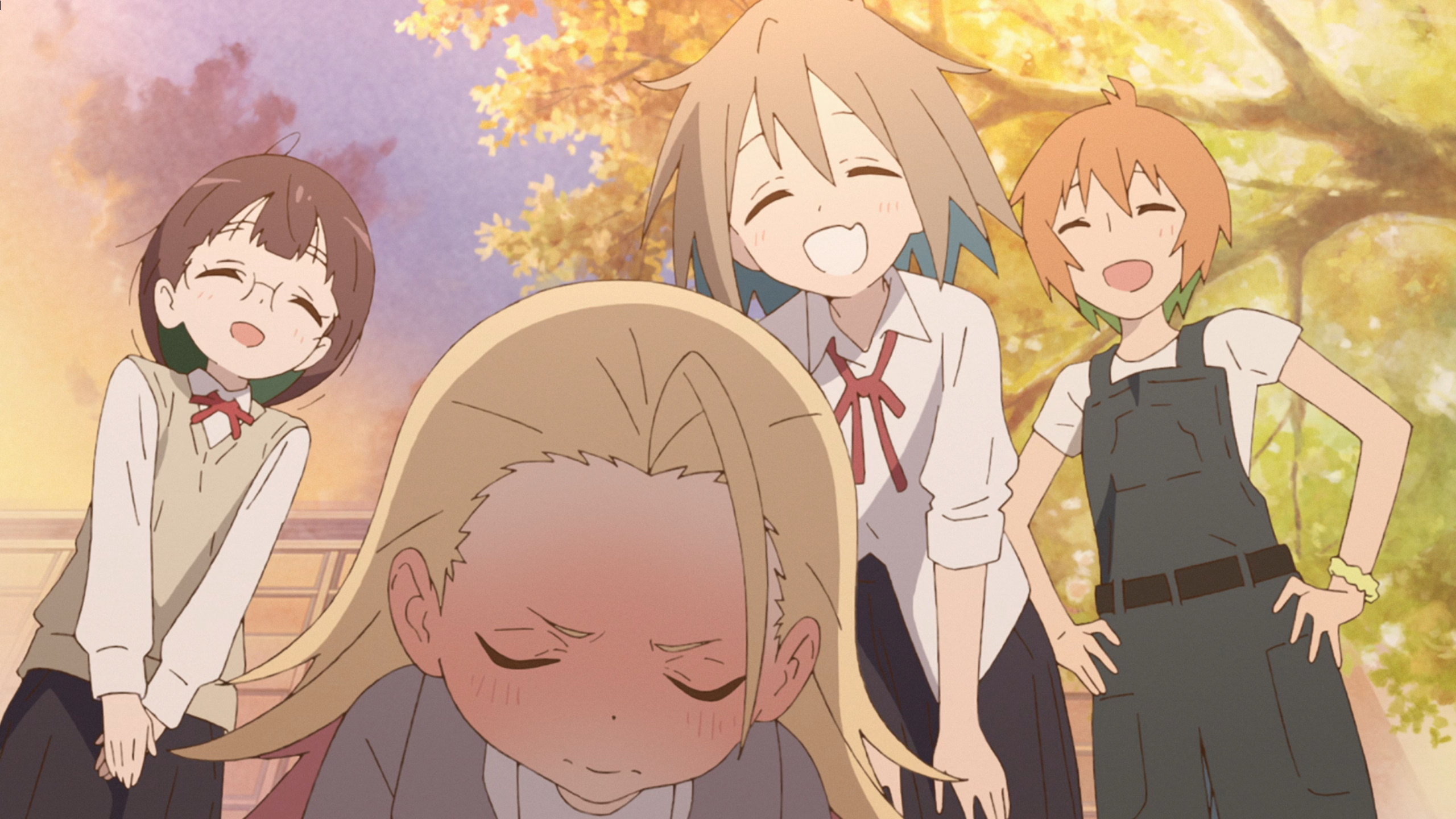 But as viewers will see, mistakes can often be made, be it how something isn’t screwed properly or — in a very extreme case — losing all of the materials needed for a project. Kurei, Takumi, and Jobko often take a realist approach to their tasks, sometimes becoming filled with doubt over whether or not something can be completed. Thankfully, that’s where Serufu comes in, who often looks at the big picture rather than solely what’s in front of her. When things look bad, Serufu is there to bring the sunshine in and the positivity to the group.

Yes, that can lead to some fantastical situations throughout Do It Yourself!! I doubt anyone would easily give away wood or high-end materials to a group of high schoolers, much less enough to build a treehouse. But this anime isn’t in it for the harsher things in life. What this show wants to do is give viewers the chance to wonder if they can pull off the same things as the DIY Club. And with enough willpower and can-do attitude, that answer will more than likely be a resounding “Yes”! 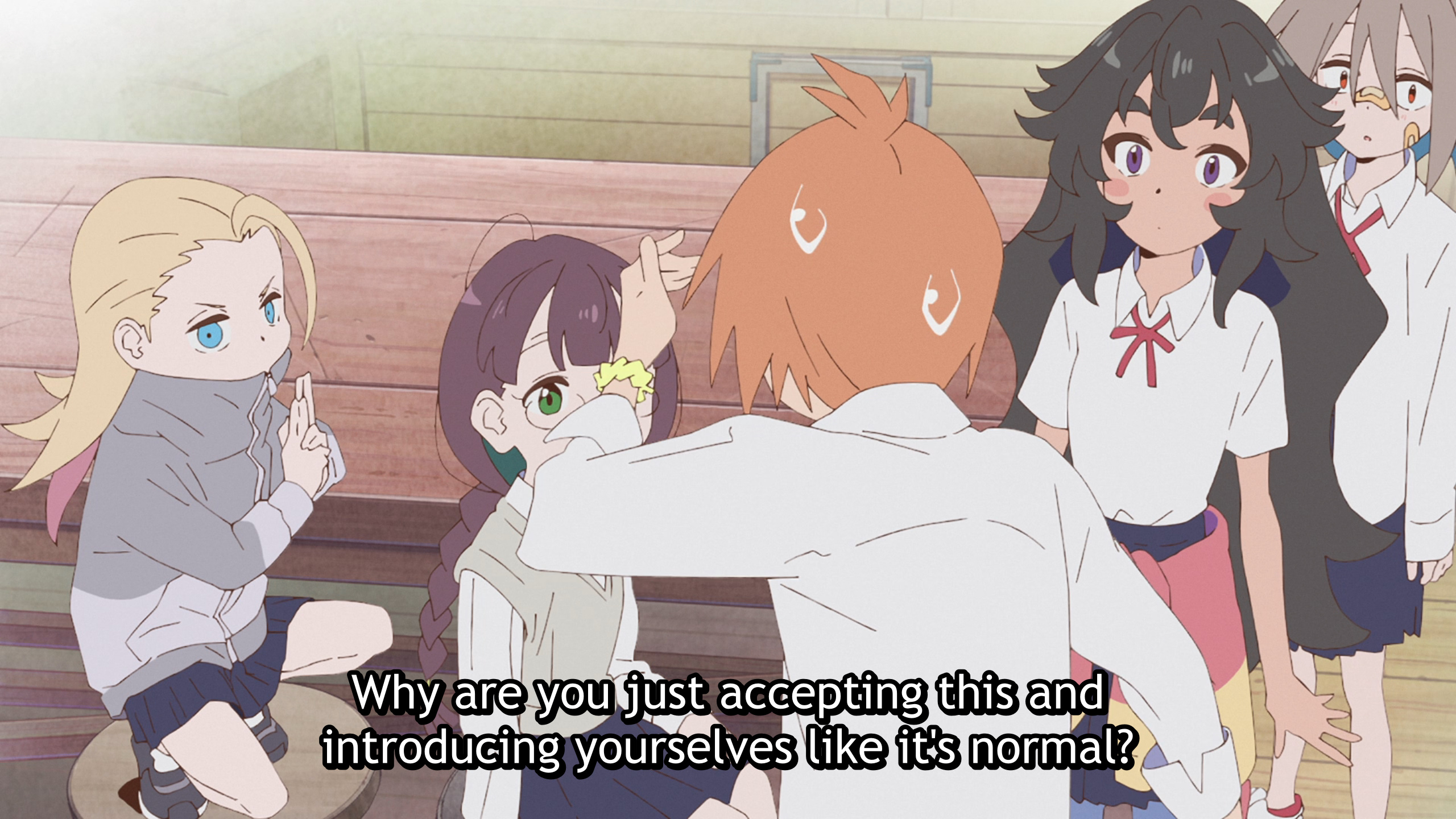 What this anime also does great is showcase the importance of making and mending friendships. It’s clear at the start that there’s a rift between Serufu and Purin, even if the former is still the chummiest of chums. But as the series goes on, whatever caused that awkwardness slowly evaporates, to the point where the two of them are by each other’s side more often than not. Perhaps it can be credited to Jobko making herself literally at home with Purin, or it could be that whatever reason Purin was mad in the first place was small and minuscule to begin with!

Where Do It Yourself!! shows its heart is within the importance of the art of handcrafting. Despite the world of ours becoming more and more technological, there’s still a desire for things to be built by one’s hands rather than a 3D printer or machinery. More character can be found in a bench made by a set of hands than one that was created in a production line, from the way something is colored to even how a part was screwed in. While this form of creating won’t be going away anytime soon (thanks, Etsy and anime con Artist Alleys!), we can easily find ourselves overlooking the items made with tender, love, and care and instead stare at the things made in mass production. 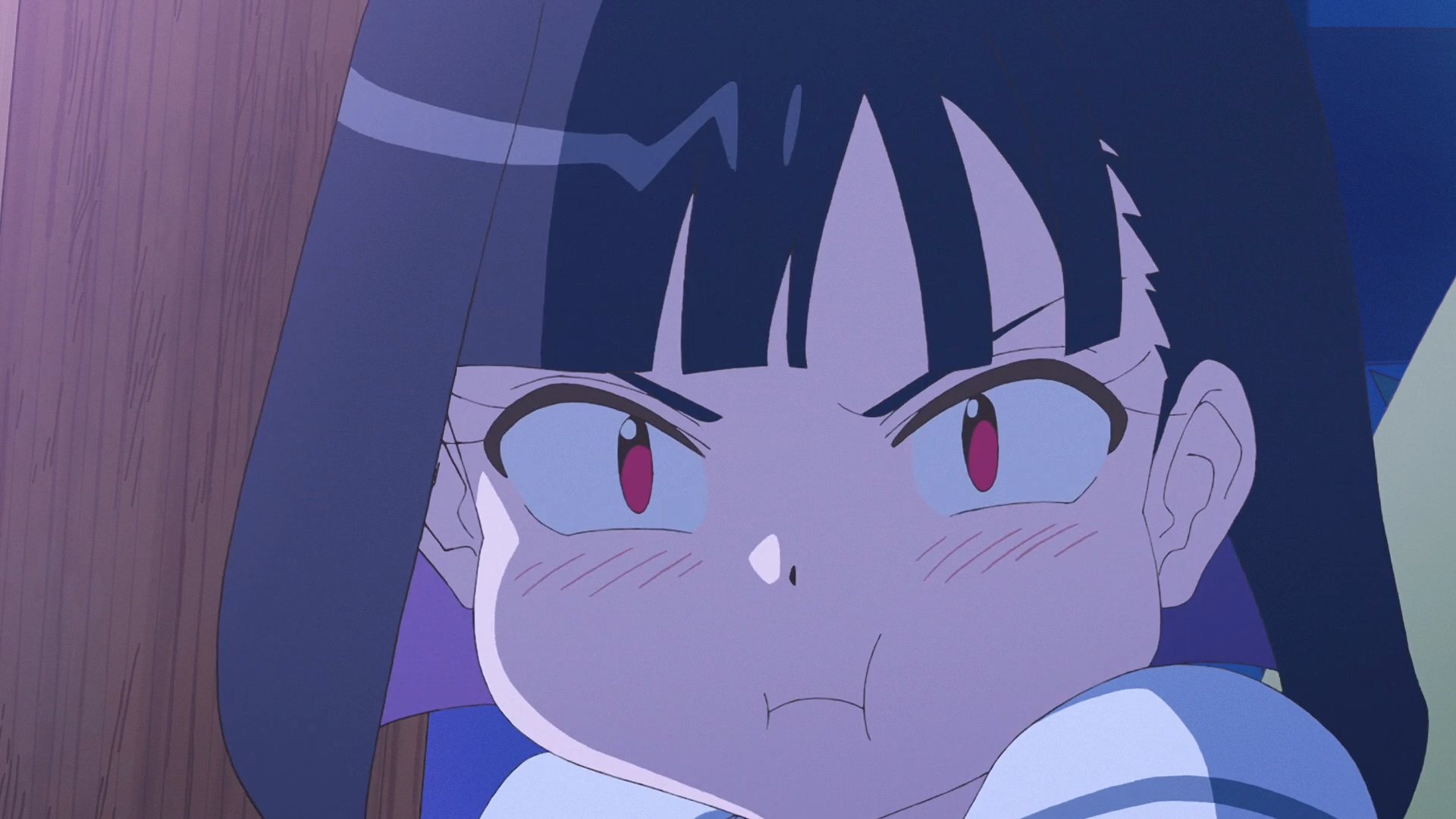 The same can be said about the animation world. While hand-drawn is still the be-all-to-end-all way in Japan, the rest of the world is instead leaning towards CGI and computers to make their cartoons. Sure, both have their highs and lows, but something hand-drawn will still look good even when it’s not god-tier. As for CGI, well, have you ever had to sit through Hoodwinked or Foodfight?!

There’s a real charm to Pine Jam’s approach to animating Do It Yourself!! While it has its cute aesthetics, the color scheme, settings, and even some of the characters look more like sketches than a finished product. It brings to mind a colorized blueprint, one that shows the parts of a product while giving it a proper heart and soul to make it all work. Although it’s not the best-looking anime of the Fall season, it certainly has the most character! 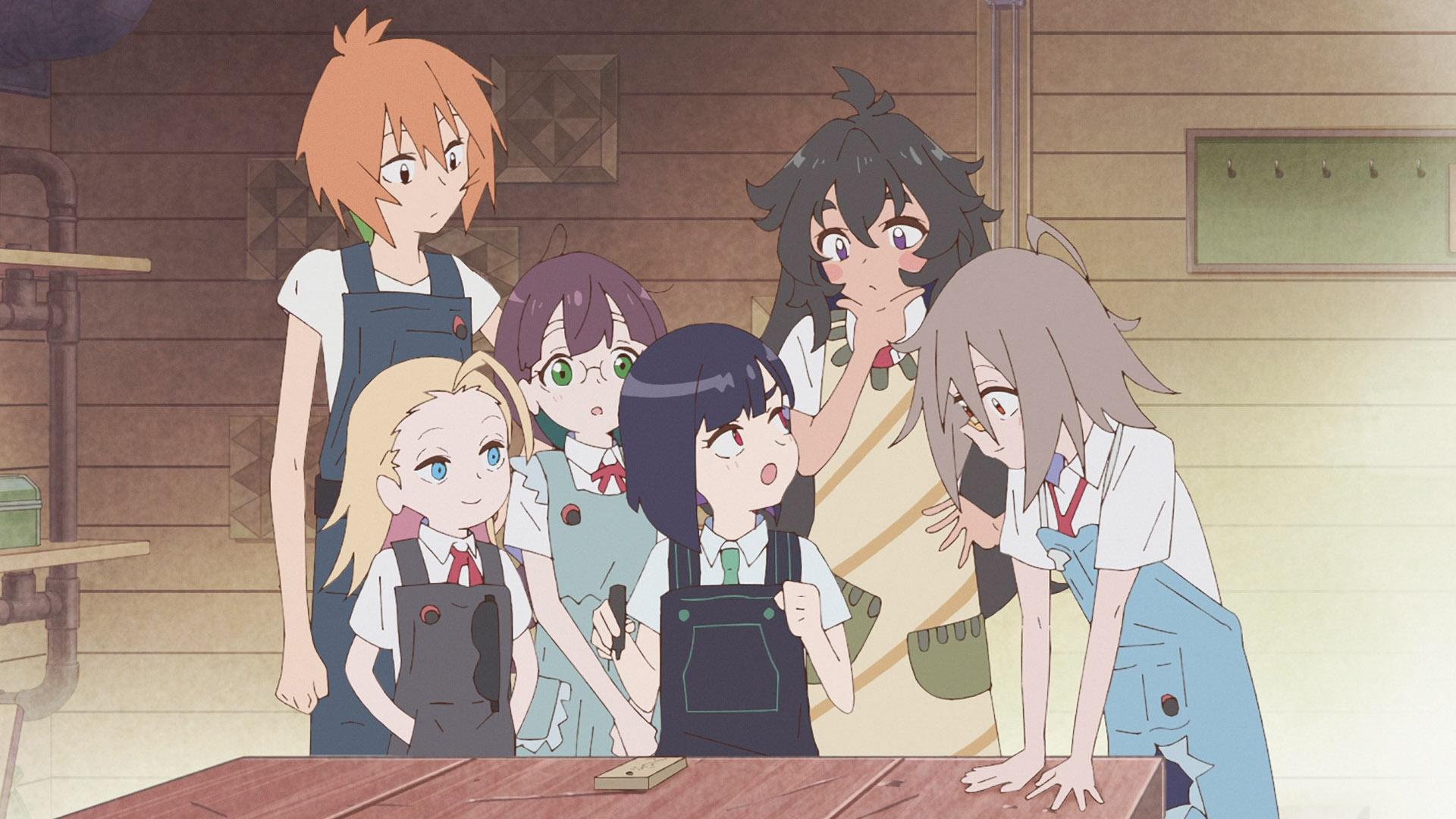 Speaking of character, the voice cast does a tremendous job breathing life into their roles. Inagaki’s got the right amount of spunk and positivity as Serufu, whereas Ichinose knows how to get Purin’s worked-up frustrations through. The voice actresses working the hardest is no doubt Ōmori, who jumps between English and Japanese in her role as Jobko. While there are some rough areas in her English annunciation, it’s a far cry better than most other performances!

Composed by Ryōhei Sataka, the soundtrack has a beautiful calm feeling all throughout the show. When the DIY club is deep into making their crafts, the score is as charming as a smile and as relaxing as a cool breeze on a summer’s eve. Opening theme “Dokidoki Idea wo Yoroshiku” by the main cast is a bouncy showstopper of song, with an arrangement that’s akin to a strong Sesame Street melody. Closer “Tsuzuku Hanashi” by Inagaki & Ichinose meshes with the main soundtrack’s melancholy vibe, acting as a lovely way to end every episode.

Do It Yourself!! is a fun, laid-back, and — most importantly — inspiring piece of animation. It’s the kind of anime that, much like Laid-Back Camp or Slow Loop, makes you want to roll up your sleeves and give it a go. Sure, you’ll more than likely fail your first go-around, but if one has a positive attitude like Serufu, then they’ll become a master of Do It Yourself!! in no time. (But please be careful of one’s digits when using the more sharper tools!)