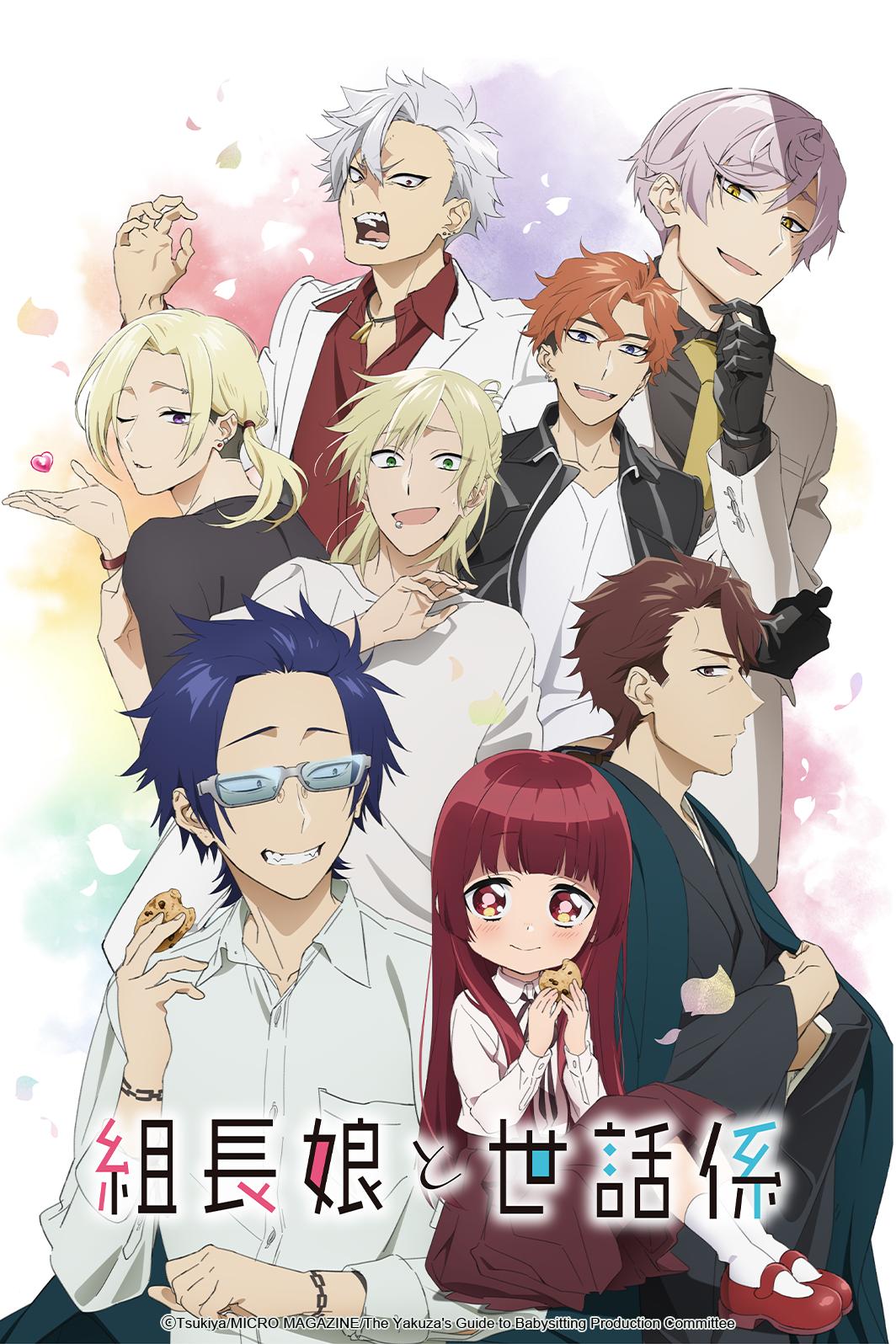 There’s family, and then there’s “family”. The former is the one that’s connected by blood; the latter is connected from bonding. For the way of the yakuza, both kinds of family can intersect, creating a level of trust that sinks deep into the DNA of every boss and member. SEGA’s Yakuza games have shown this off perfectly, thanks in part to its iconic and beloved star Kazuma Kiryu, who demonstrates his strength in a physical, mental, and spiritual way.

Kazuma comes to mind when I look at the character of Toru Kirishima (Yoshimasa Hosoya), the main focus of this season’s The Yakuza’s Guide to Babysitting. Both wear their hearts on their sleeves, but know when it comes time to toughen up. They also share one other thing in common, and that’s their talent of taking care of children. But unlike Kazuma, who runs an orphanage and treats every child like they’re his own, Kirishima takes more of a guardian role when it comes to caring for a kid. 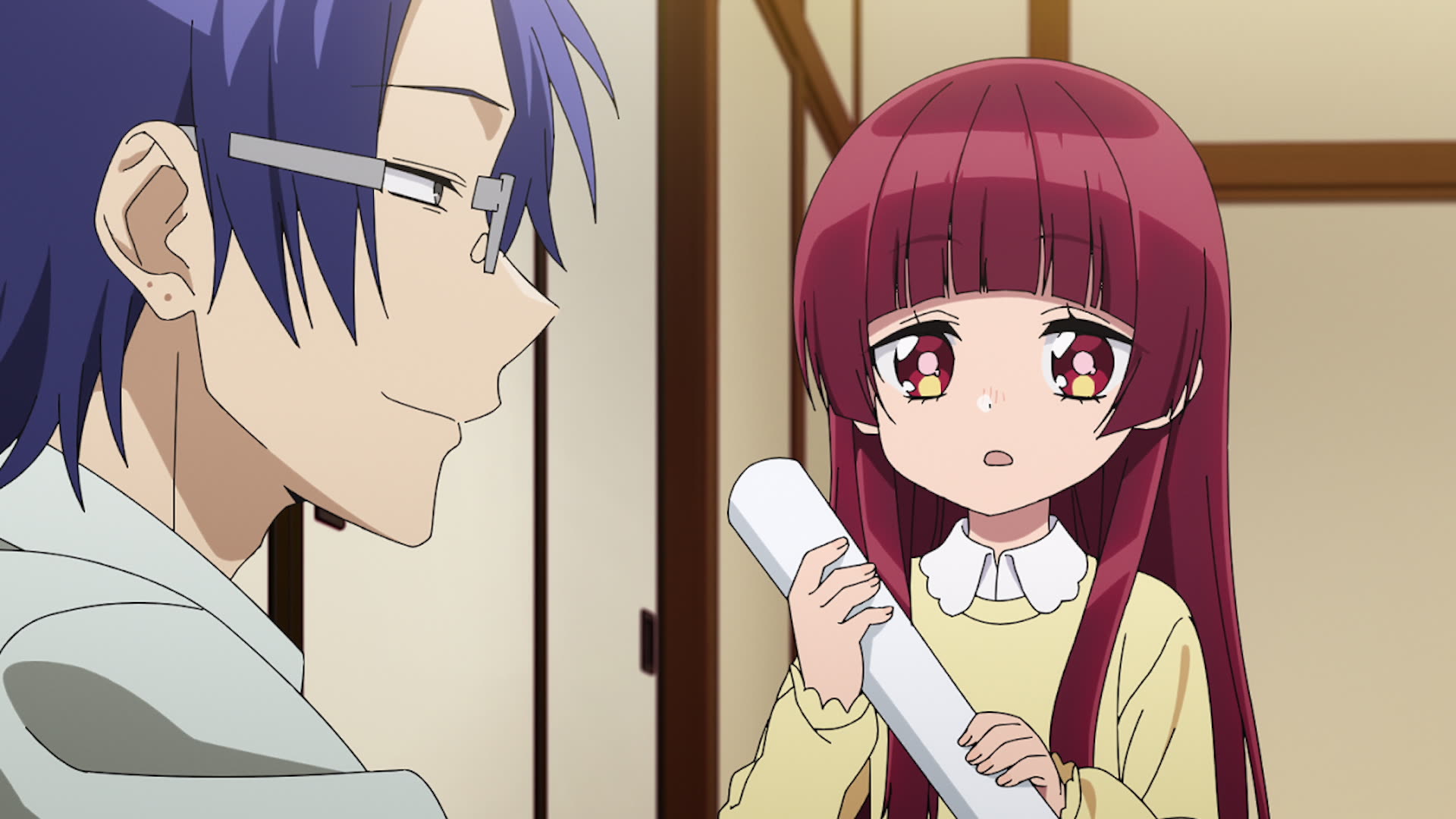 Kirishima also doesn’t just jump in willy-nilly into babysitting; it’s all actually a form of punishment. After an incident that led to a fight, his boss Kazuhiko Sakuragi (Ryota Takeuchi) places him in command of keeping an eye on his daughter Yaeka (Misaki Watada). At first, Kirishima is frustrated with his new gig, since he has no experience with kids. However, as the story goes on, Yaeka finds ways to slowly melt the icy heart that rests in Kirishima’s chest.

Viewers soon learn that deep within the funny bone of The Yakuza’s Guide to Babysitting rests a broken heart. Due to an illness, Yaeka’s mother Miyuki (Mai Nakahara) is left comatose in the hospital. Because of her father’s duties as a yakuza boss, it means that she rarely has parental figure to look out for her. Hence why Kirishima enters her picture, and begins to bring a new level of brightness to her life. And through these experiences with Yaeka, Kirishima learns to be a more peaceful individual. 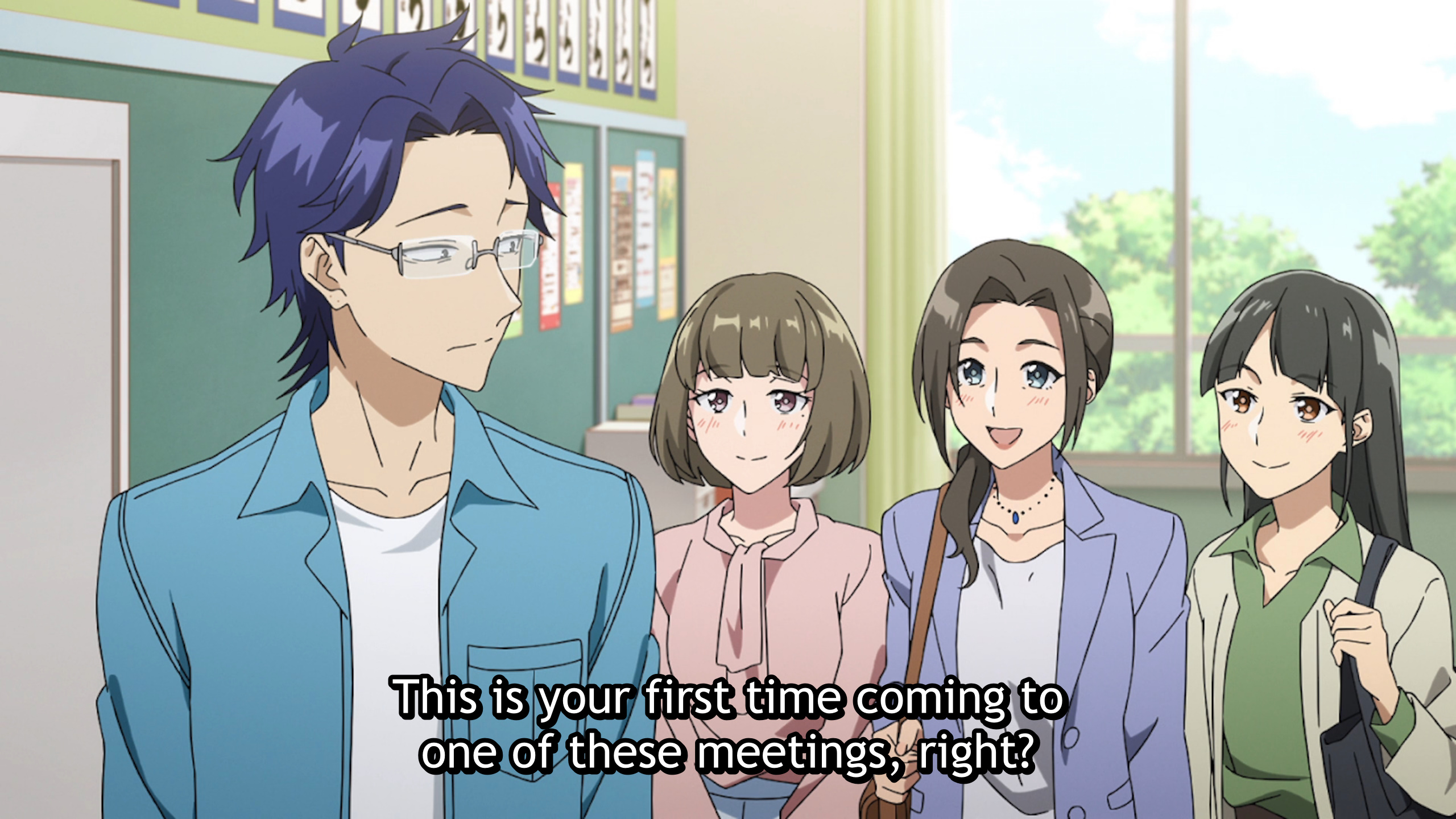 It begins with small acts of kindness, be it Kirishima visiting Yaeka at school on a parents day or simply winning her a prize at a festival. But then they start celebrating each other’s birthdays, rekindle old friendships with ex-family members, and even changing some of the rougher attitudes of other yakuza. Kirishima even has an attitude adjustment, no longer beating people to near-death, only instead giving them some warning blows and letting them at least walk home from their injuries. (The same can’t be said about rival Yuri Mashiro (Hiroshi Kamiya), who makes a habit of murdering all who disappoint him on his quest to kill Kirishima.)

But it’s not just all warm & fuzzy feelings in The Yakuza’s Guide to Babysitting; there’s still room for some sort of hilarity. That comes in the form of the anime’s fourth episode, where Kazuhiko orders Kirishima to become a YouTuber in order to earn more money for the family. What follows is a hilarious satire on how internet stars can rise as quickly as they fall, as Kirishima goes from doing pastime activities to being a full-fledged idol. It’s a nice goofy break from the main story, which does have its fair share of humor in its own right. 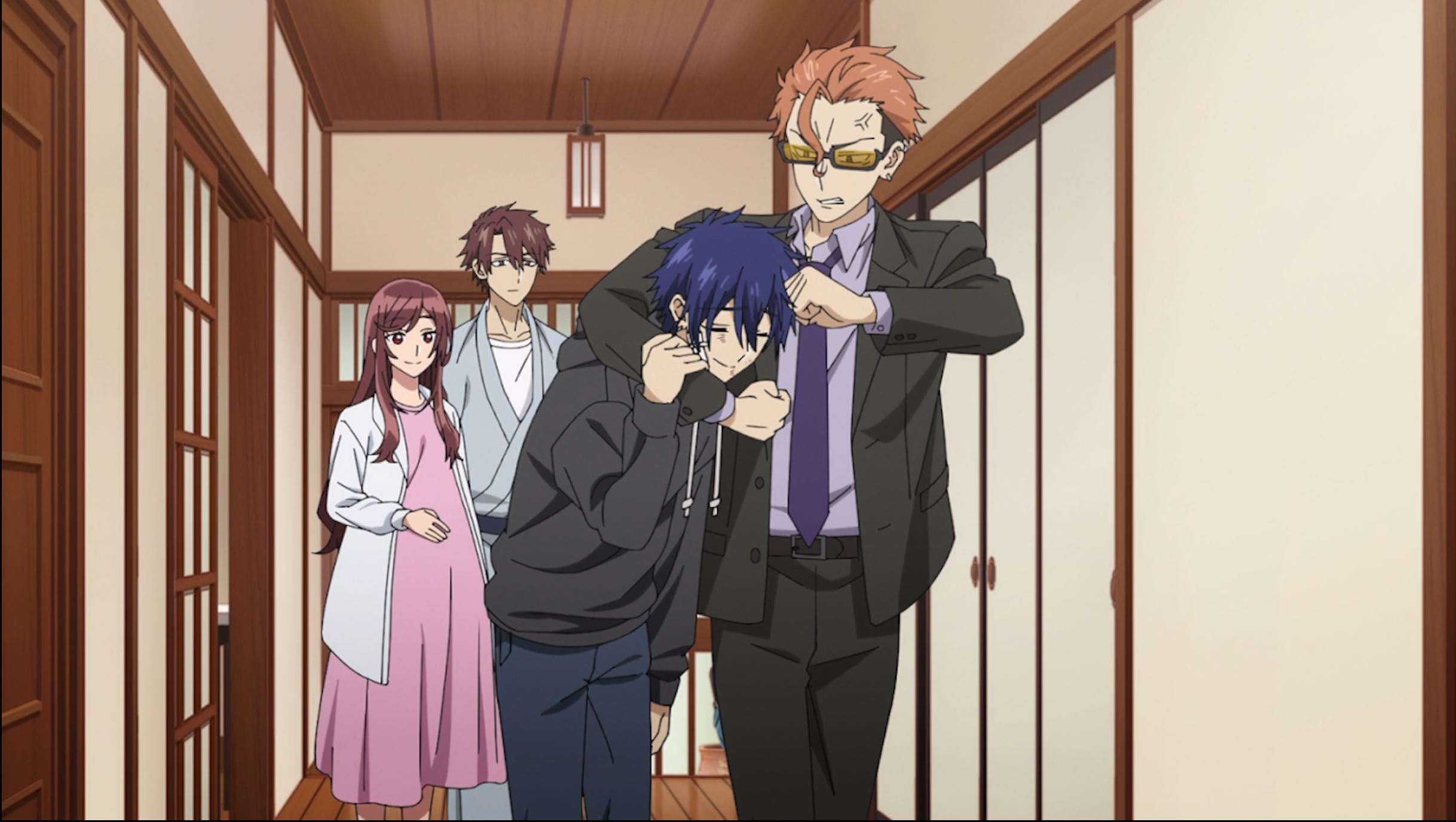 However, unlike Studio Feel’s past work Hinamatsuri (which is also about a yakuza member becoming an unwilling guardian), this anime doesn’t try to play for laughs. Instead, the show focuses more into the heart of these characters and their situations. You see Kirishima becoming a better person, Yaeka a more open child, and even Kazuhiko a much warmer father. It also helps when the series flashes back to the past, as you find that these mannerisms that have awaken from their inner selves have always been there since the beginning. A great example of this can be found in a flashback to Kazuhiko and Miyuki’s first date, with the boss’s stern attitude nowhere to be found and instead overtaken by kindness and pure joy.

These attitudes are showcased strongly in the voice cast. Hosoya takes a more laid-back approach as Kirishima, one that fits with both taking care of a child and even feeling intimidating. As Yaeka, Watada allows herself to go from being a shy to an adorable blossom yearning to be heard. Takeuchi can be stern as Kazuhiko, but knows when to leak the right amount of emotion when it comes to his daughter and wife. 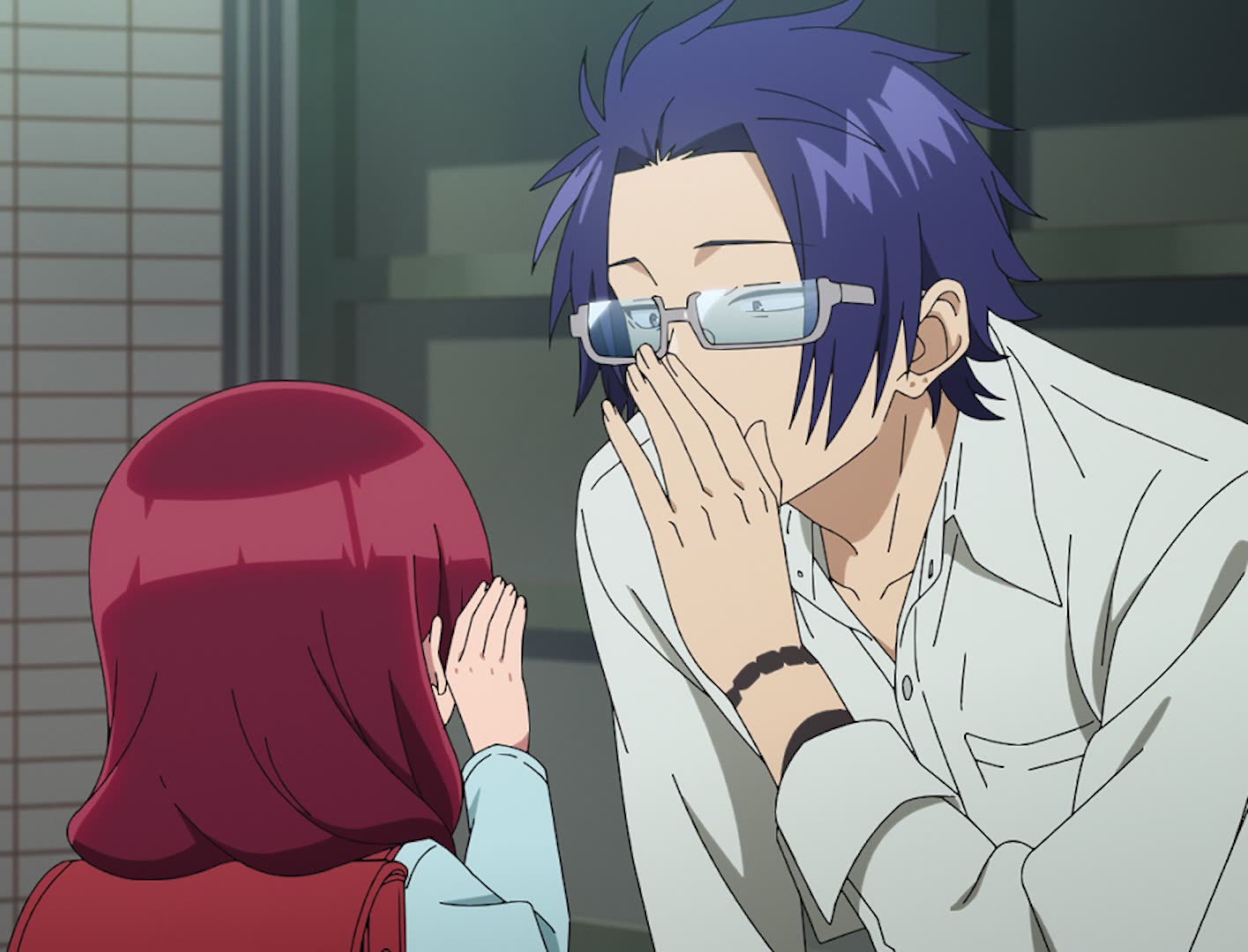 From an animation perspective, The Yakuza’s Guide to Babysitting isn’t exactly great. Partnering up with Gaina (Forest of Piano), Studio Feel has some moments where animation corners are cut and movement can be a tad janky. However, when the focus is on a more serious matter, the visuals look far better, especially when it comes to showcasing emotion. Props should also be added to the fact that the character designs look exactly the same as Tsukiya’s original manga, something a lot of animation studios have a hard time doing.

Despite its animation shortcomings, The Yakuza’s Guide to Babysitting has its heart and spirit in the right place. With its likable cast and relatable storytelling, the latest anime from Feel and Gaina finds ways to resonate to any viewer, even if they don’t have kids of their own. It knows when to be funny for funny’s sake, and it manages to bring a tear to one’s eye just by simply being honest with its characters. Simply put, The Yakuza’s Guide to Babysitting is a delight, one that will take anyone going in blindly by surprise.