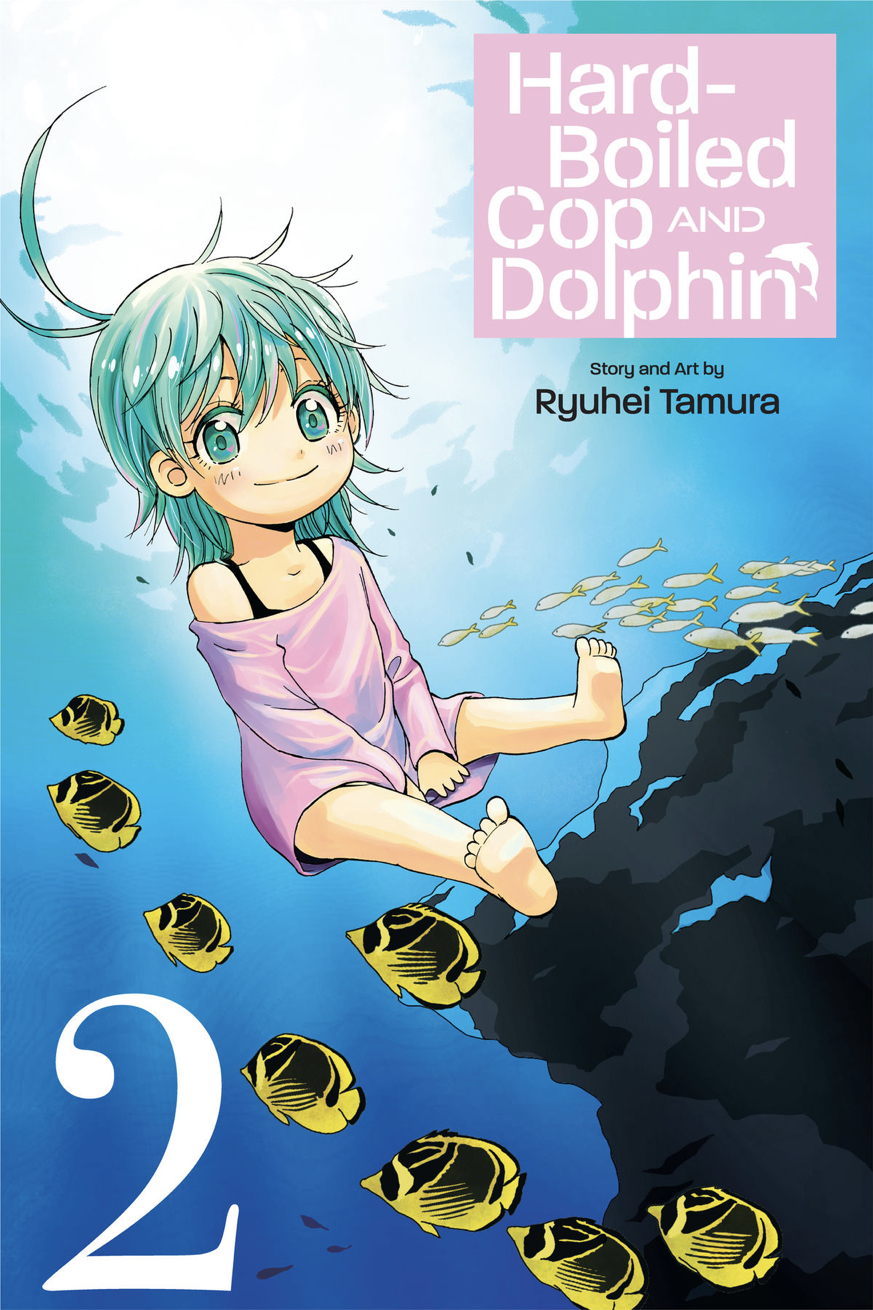 It was hard not spoiling the joke in the premiere volume of Hard-Boiled Cop and Dolphin. Even though said gag played a big role in the narrative overall, Ryuhei Tamura’s latest concoction was too good not to simply tell. The fact that this manga follows a half-man/half-dolphin and his gritty partner simply gave me the biggest grin on my face, in the same way Axe Cop did many years ago. In its second volume, Hard-Boiled Cop and Dolphin goes deeper into its lore, as the ocean crime syndicates start making their moves.

Things quickly get underway when Boyle and Orpheus get a call about a truck accident. When arriving, they come face-to-face with two tough ocean gang members with the powers of the hammerhead shark and the marlin. However, their reason for fighting against the land-dwellers isn’t as clean-cut as one could imagine. Later, Boyle attempts to have a normal day on the abnormal island, and an attempt on the life of a dolphin trainer may be connected to the string of severed legs found on the beach. 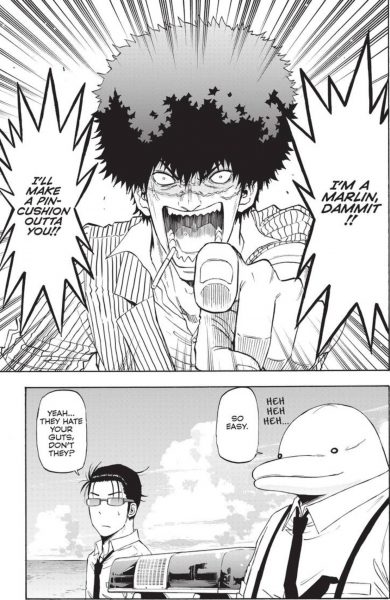 The wildness of Hard-Boiled Cop and Dolphin’s story keeps the plots on the straight-and-narrow. Although it seems like Tamura is throwing in these ocean animal people in here for the halibut, there’s a surprising amount of world and character development to be found. It’s clear that the ocean crime syndicate isn’t the best place to find a job, which is why we’re seeing some members find a way out of the ocean and onto the land life. Unfortunately, past crimes can’t be forgiven until all penance is due, which is where Boyle and Orpheus’s skills come into play.

Even if this manga is bat-shit crazy, it doesn’t mean it doesn’t know how to deal with serious things. From a crime lord family’s disappearance to attempted murder, all of these things are presented with a touch of shock and heart. It brings to mind Arakawa Under the Bridge, where even the wackiest of people and ideas can bring a sliver of warmth to the table. Of course, with a title like Hard-Boiled Cop and Dolphin, readers are more than likely to come for the comedy more than the tension. 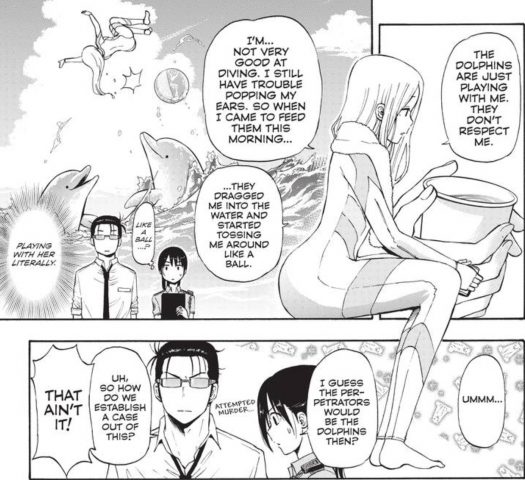 One cannot be blamed if watching a dolphin guy beat the crap out of a marlin person results in laughter. The same can be said when the duo set out to find an old woman’s dentures, only to find themselves face-first in a search for a panty raider. Even watching Orpheus coach a few of his dolphin brethren how to do routines as if he was the greatest trainer whoever lived will leave people spitting out their drinks with a hearty chuckle. These WTF moments are where the manga shines the brightest, and each chapter gifts us with enough to fill a hard drive of memes!

There’s plenty of laughs and unexpected drama to be found in Hard-Boiled Cop and Dolphin’s second volume. Tamura finds a way to mesh the ridiculousness of his narrative with that of some serious crime drama. Yes, it’s still a tale of a dolphin man; it doesn’t mean it can’t try to deliver something profound. Then again, we’re all here for the crazier parts, and Hard-Boiled Cop and Dolphin is serving plenty of crazy for us all to be satisfied! 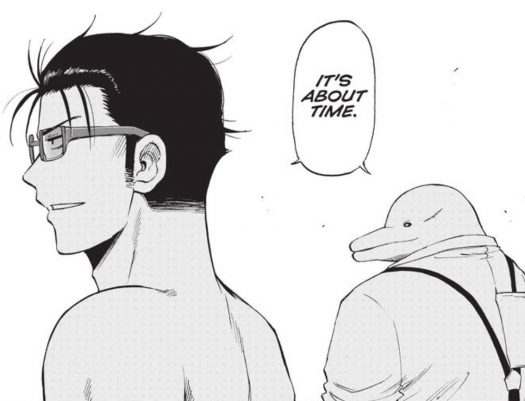 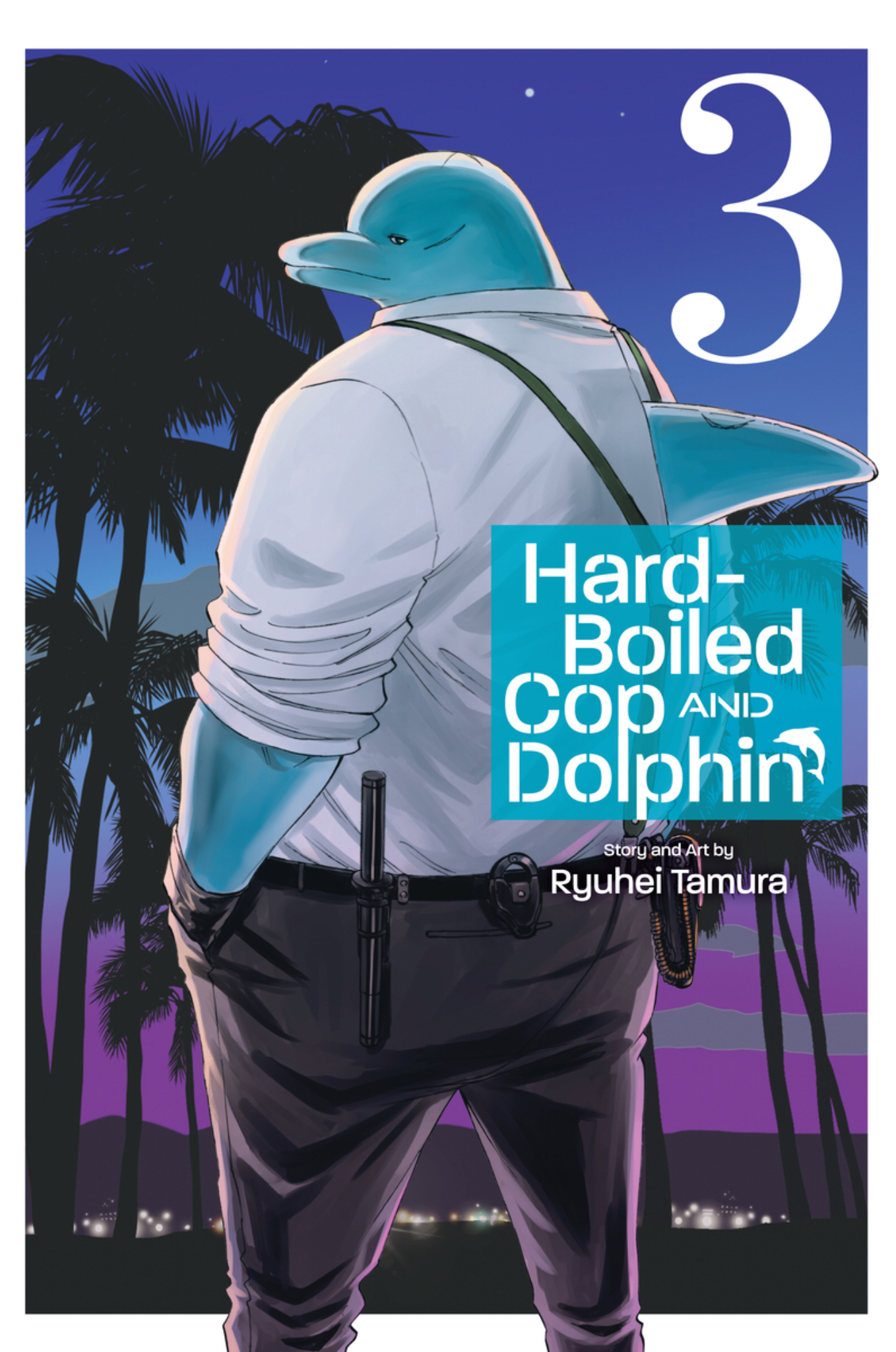 In a word, Hard-Boiled Cop and Dolphin is bonkers. Yet even this tale of a renegade cop, an aquatic partner, and a mysterious little girl can have some good mystery to it. Despite its lunacy, it’s clear that author Ryuhei Tamura has thought deeply about his characters and the world they reside in. After what happened in Volume Two, it’s clear that its third volume would have to start answer some questions.

For starters, we continue onward with the disappearance of Yukari, as the ones who sat on their hands the entire time try to clean up the mess they were supposed to prevent. Thankfully, Samejima has the back of Yukari’s friend Hamura, who the safety officers attempt to wrongfully arrest. But with the bigger fish that resides in the Cult of the Sea, it’s clear that Samejima and Orpheus need some bigger guns. That’s where the Marine Mobile Investigations Unit comes into play, whose captain Tome Jinguji has her own secrets ready to be unleashed. 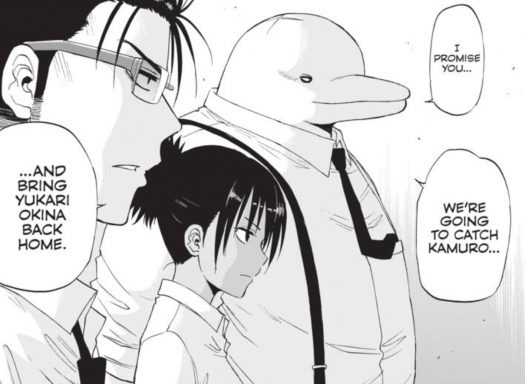 But first, Chako needs to be taught a lesson when she breaks Orpheus’s favorite cup. The aquatic cop tries to see how long Chako can lie before she reveals the truth. Unfortunately (and hilariously), the “culprit” Chako claims is the real mug-smasher comes to life, and causes some chaos sprinkled with curse words. Things don’t calm down, as Samejima and Orpheus deal with Japan’s gravest enemy: cockroaches!

It all leads Hard-Boiled Cop and Dolphin towards a glimmer of good luck for the pair and little girl, with them taking residency in a swanky mansion. But its current caregiver and his son want nothing of their kind in their surroundings. Trap doors, Chako’s acting skills, and possible poop-shaped trees come into play as Samejima and Orpheus attempt to foil the caregiver’s plans of, well, vacating his current position. Just as they start getting used to their new comfy surroundings, the MMIU show up. 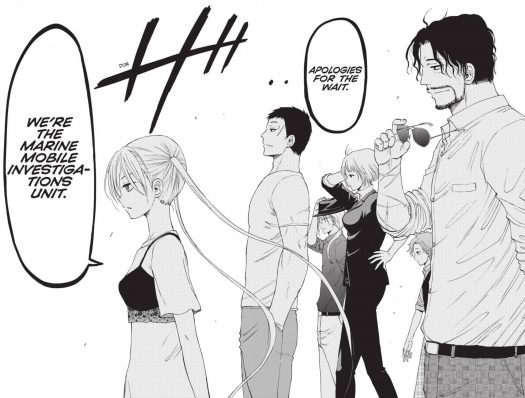 Enter Tome, who reveals some interesting facts about Orpheus that can’t be spoiled here. But what can be mentioned is how both teams dive deep into the ocean to seek a certain artifact the Cult of the Sea may be interested in. And when certain people (or mermen) of interest show up, Tome demonstrates her skills in ways that seem pretty inhuman. Thankfully, the techniques showcased are beautifully drawn, showcasing Tamura’s skills in the action department.

Volume Three of Hard-Boiled Cop and Dolphin delivers a great balance of humor and mystery. What started as a ridiculous story is now showing just sort of teeth are hiding behind its goofy smile. Yes, things are bound to get more ridiculous, and perhaps the more serious aspects might take some time to blend with the comedic. Nevertheless, Hard-Boiled Cop and Dolphin is here to entertain you like Grade-A SeaWorld attraction, before it surely pulls a Blackfish on its audience! 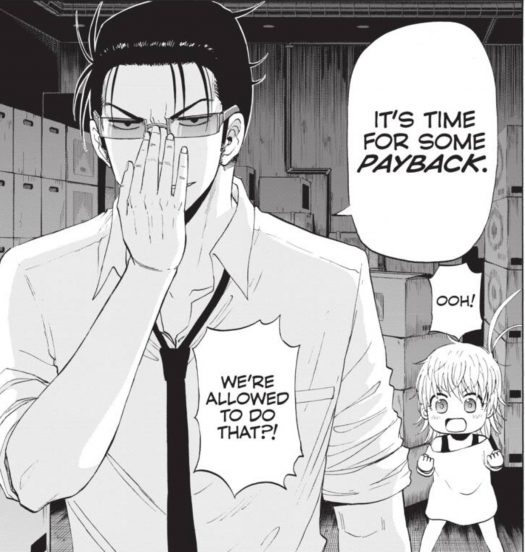