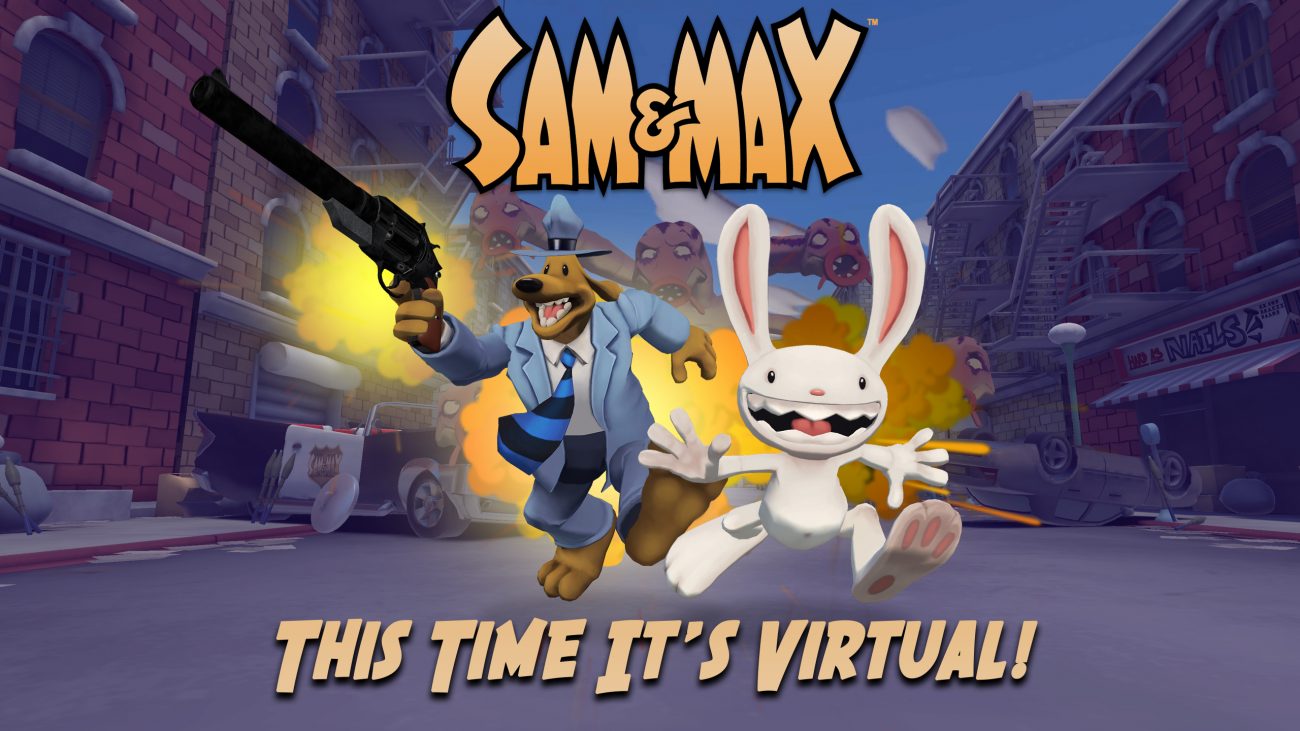 Ever dream of working side-by-side with one of your favorite fictional characters? We all do that as kids, but sometimes even adults have fantasies of going on adventures with their favorite heroes and action stars. One of my faves growing up was Sam & Max, with their LucasArts adventure game and Fox Kids TV show still being staples of my childhood. And as a kid, I would imagine the wacky capers I’d go on with the police dog and rabbit thingy.

Flash forward decades later, myself now a grown adult that now does the things adults have to do. Surprisingly, Sam & Max are still around, thanks in part to their fantastic Telltale seasons that stay true to both their comics and TV series. And now with the power of virtual reality, I could finally go on that adventure my younger self wished he could experience. Sam & Max: This Time It’s Virtual lets fans experience an adventure with the wacky cops, albeit with some things slightly askewed. 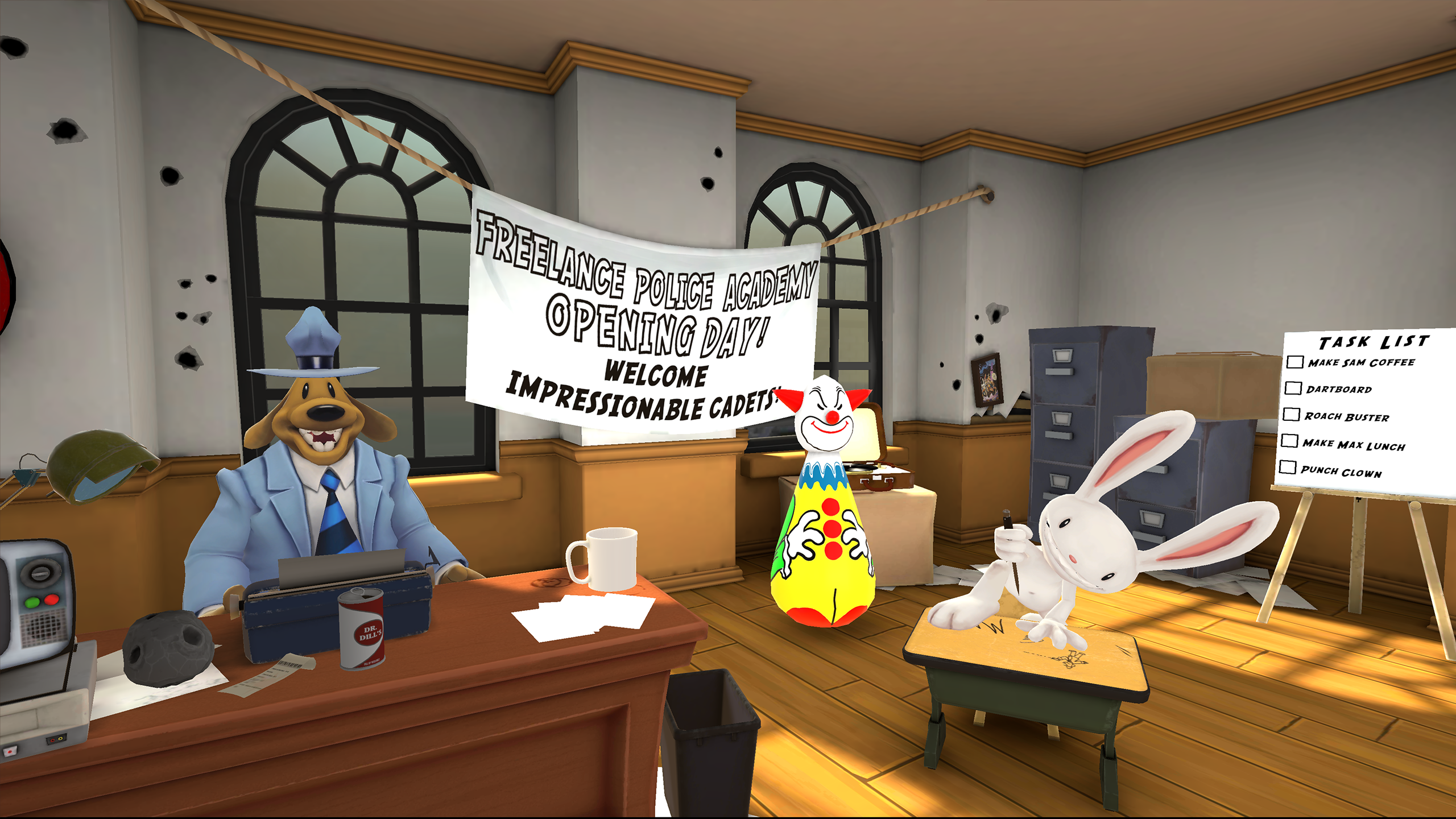 Players begin at the tail end of a wild Sam & Max adventure, as you aid in dealing with a massive worm monster. Impressed with your skills, Sam offers you the chance to work alongside them on the team. Dubbed “Lumpy” by Max, you are tasked to go through all sorts of police training, while at the same time handle small disturbances that happen around town. Knowing Sam & Max, the training isn’t exactly by-the-book.

Using an abandoned amusement park, Sam & Max put through through various training involving shooting, obstacle courses, and the occasional escape room. These levels will help train your skills for the big time, as demons, time travelers, and Aquabears cause chaos for you and the lovably chaotic police duo. All of it is captured in immersive virtual reality, with many of the levels giving a solid feel of actually being there. Of course, it’s not without some issues. 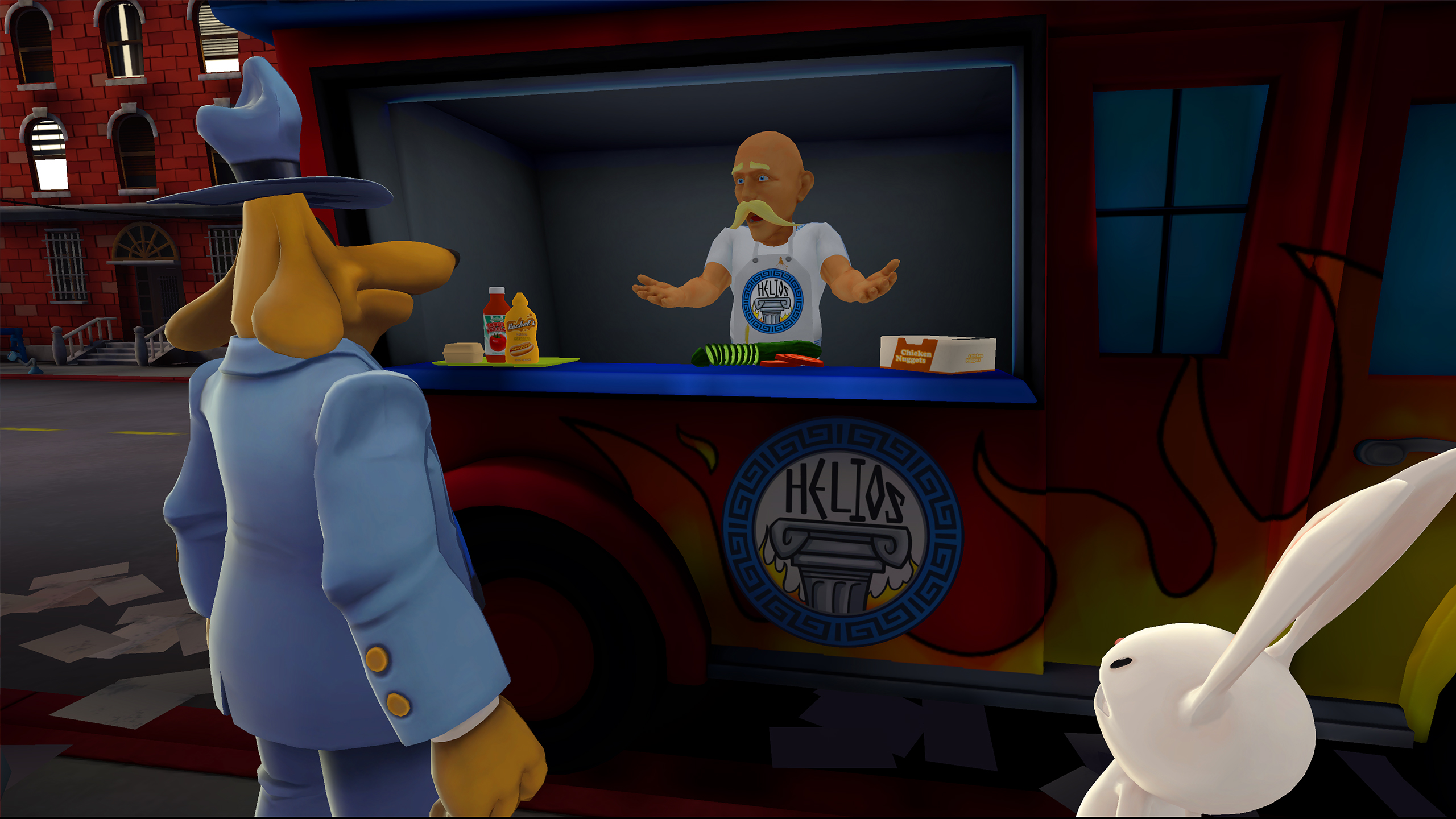 Playing on the PlayStation VR, having to be tethered to one’s console doesn’t give the same amount of freedom as the Oculus Quest. With that being said, there’s enough room to maneuver without feeling like you’re gonna trip over furniture or karate chop your television. However, many times while I was playing, I had some issues grabbing items that had fallen to the ground, to the point where I was on my ground and still couldn’t reach the objects I needed. There were also occasions where my entire screen would be blacked out due to a possible obscured angle, with me having to spin around until I found a sweet spot to teleport back to.

Other than those kerfuffles, Sam & Max: This Time It’s Virtual does a good job with making you feel like you’re in this wacky cartoonish world. Climbing scaffoldings, riding on zip lines, and even the occasional hoverboard flight gave off the feeling that you were there. One occasion, I found myself falling from my zip line, with my stomach dropping as if I had actually landed safely on the ground. It’s these little touches that help to make the VR experience feel a lot more real than it actually is. 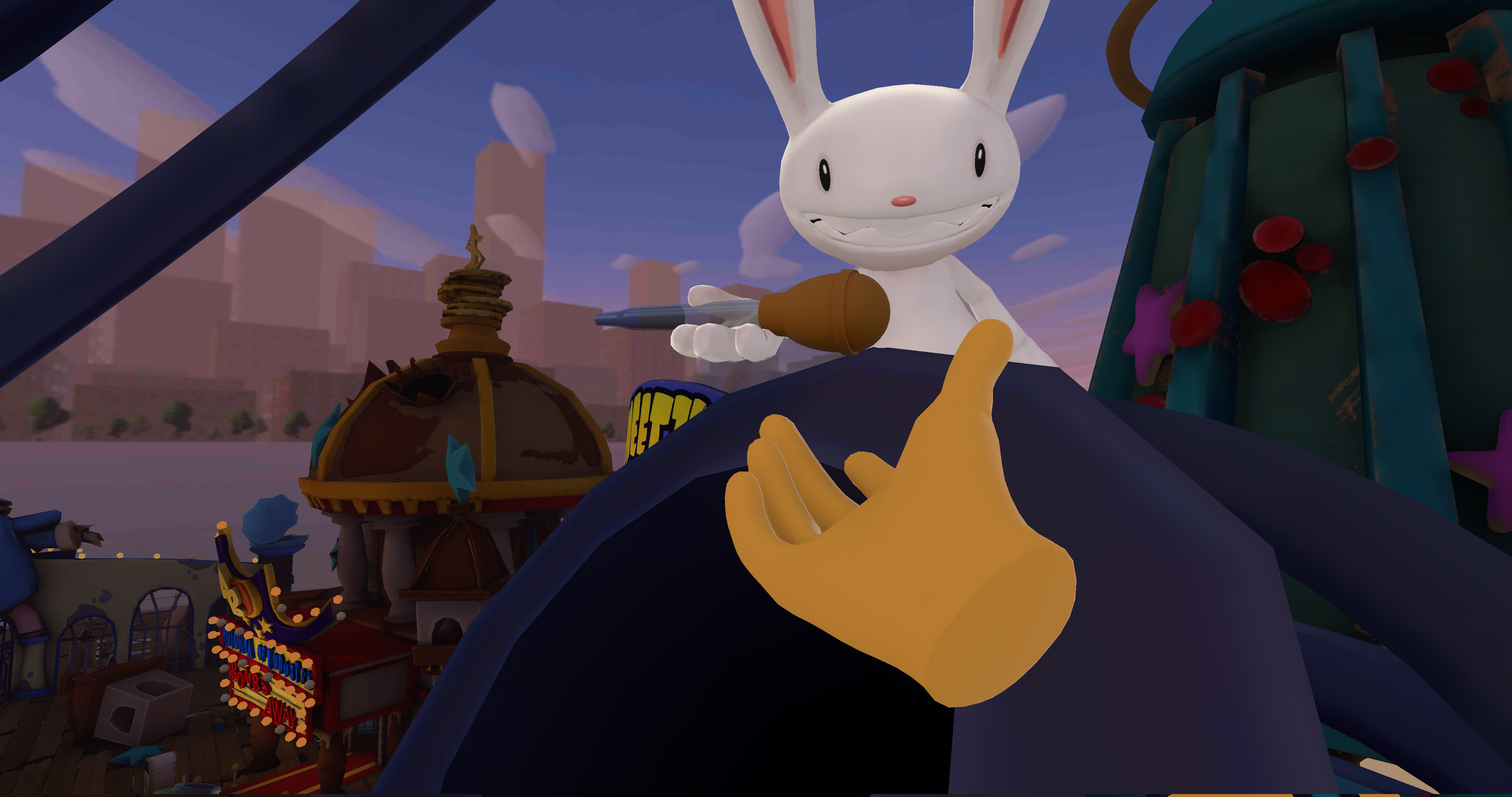 This leads me to the game’s actual missions. Obstacle courses, shooting galleries, and **looks at notes** aquatic worm monster training all have their fun elements, with some exception. Some levels don’t exactly tell you what you have to do, resulting in you spending half of your time attempting every sort of thing you can think of before you come across the right initiative. Fortunately, these levels are all chock filled with Sam & Max’s trademark humor, sometimes going naughty routes with their one-liners.

However, levels involving weaponry can be pretty hit-or-miss. Levels involving gun play are fairly easy to figure out, so long as you don’t go too crazy with one’s movements. It’s the ones that require you to throw or toss items like balloons, bombs, and even Max himself that can be very frustrating to go through. Either I’d throw too hard or not hard enough; it was almost never the right amount of force I’d initiate. Many of these levels resulted in me getting low scores, and while I never exactly failed any of the tests, there were quite a few F’s on my report! 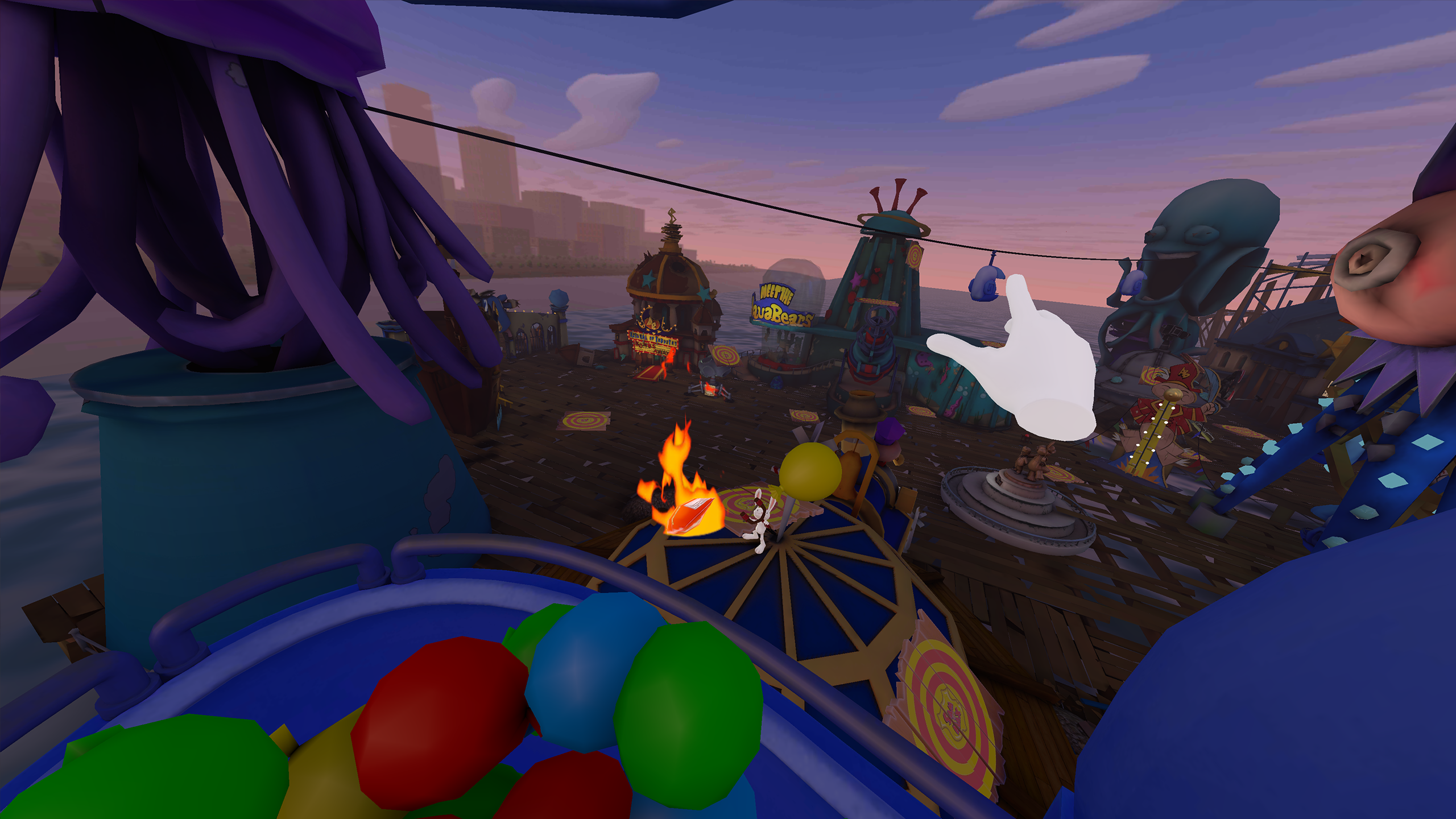 It’s when you leave training and deal with town incidences when your newly-learned skills come into play. Dealing with demons overtaking a grocery store or a crackpot time traveler have their very funny moments, but it’s taking them down where you’ll get to see your talents shine as brightly as Max’s pure white smile. Granted, there will be plenty of trail-and-errors before you find the answers, but you might discover a new gag here and there if you search hard enough.

Despite the fun Sam & Max: This Time It’s Virtual delivers, I can’t help but feel like some training levels felt too repeated. The obstacle courses gave off this concern the most, with all three feeling like simple copy-and-pastes of one another. While they did add another level of difficulty each time, they didn’t exactly deliver in the unique factor when one can just simply guess what to do next without thinking too hard. 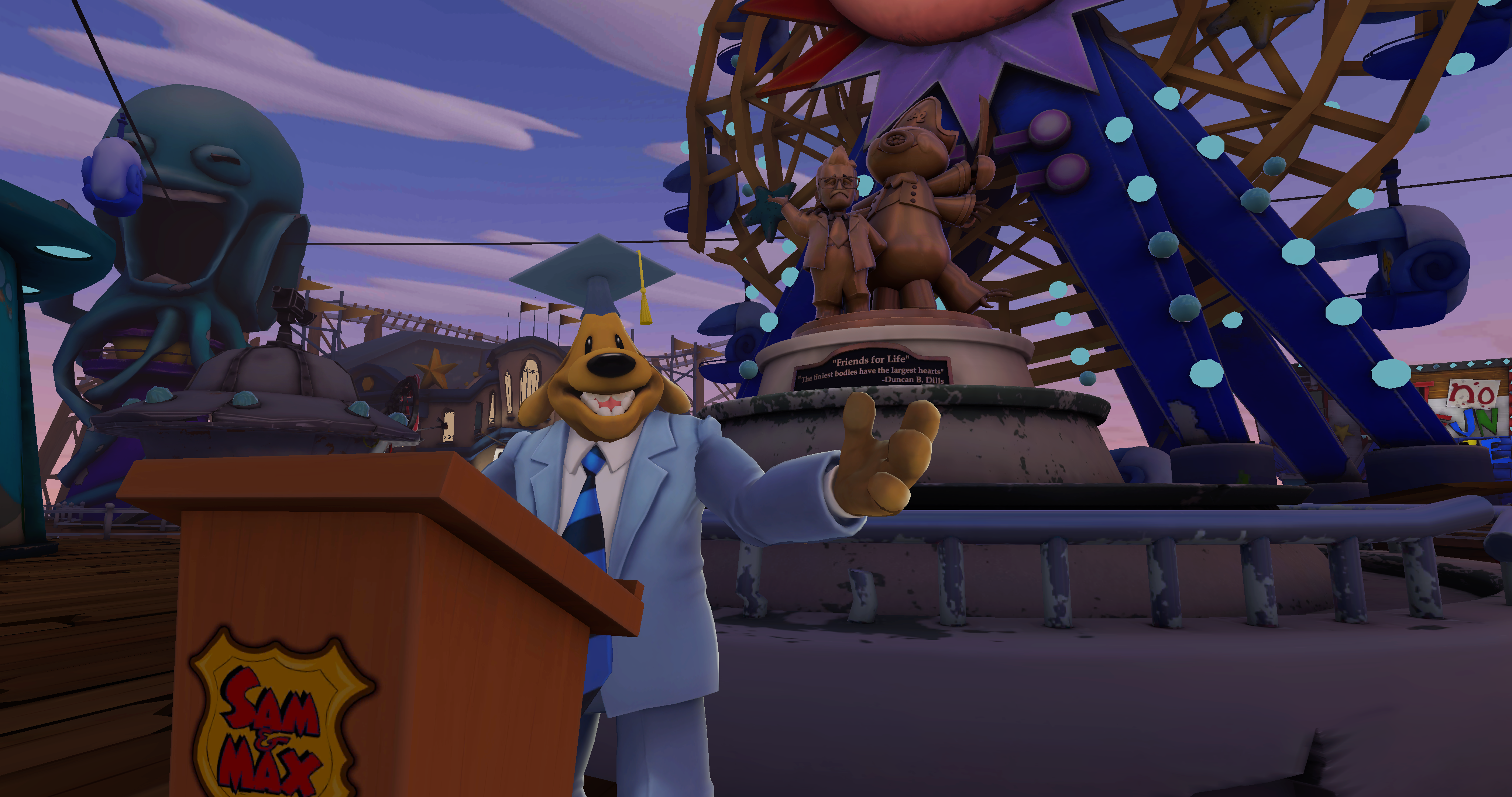 The game will take you roughly 3-4 hours to complete. Once completed, players can revisit past mini-games and attempt to get better times and higher scores. There’s also the ability to revisit past crime scene levels, which can be handy for those looking to speed run the game.

Sam & Max: This Time It’s Virtual isn’t a perfect VR adventure with Steve Purcell’s characters. However, it does showcase the series’s charms and humor, on top of giving a good immersion of these characters’ worlds. There’s a solid blueprint for a top-tier Sam & Max VR game for the future, but even if that doesn’t pan out, This Time It’s Virtual will still satisfy any fan of the franchise.