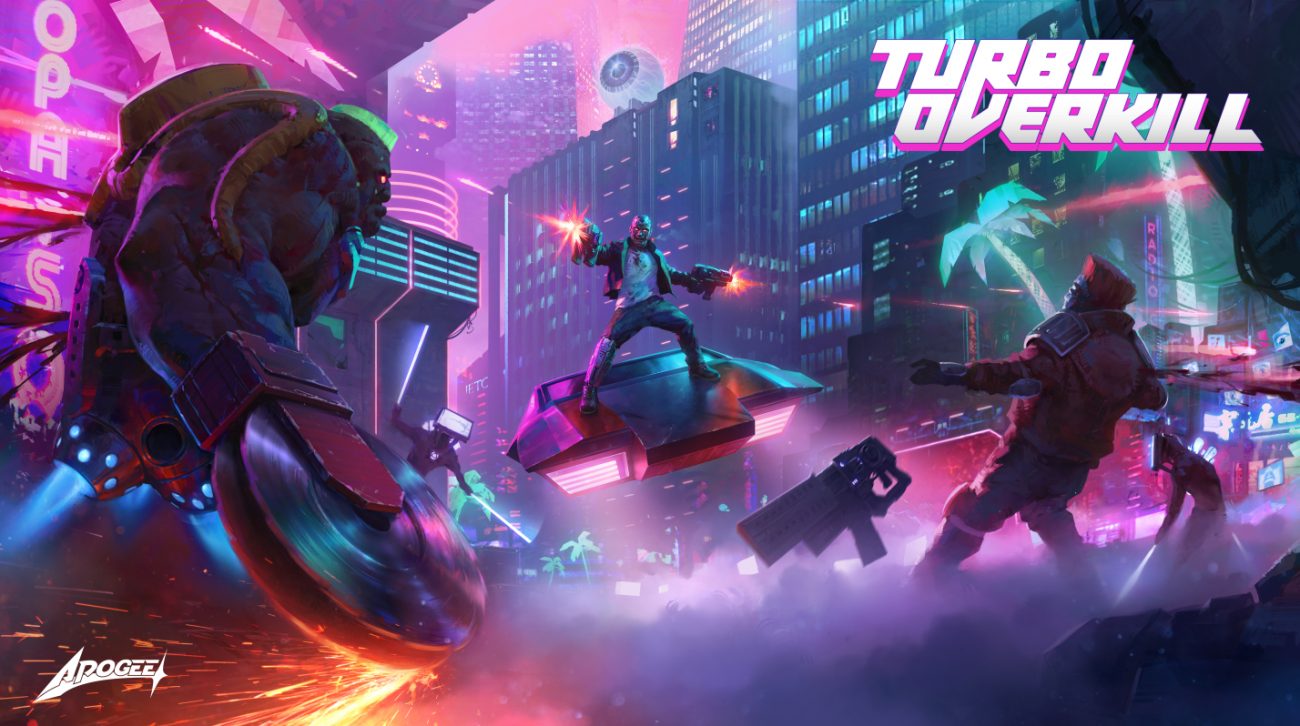 Before there was Early Access, there was “shareware”. Back in the 90s, Apogee Software made a name for themselves by selling the first part of a game for a couple of bucks, in hopes that it’d make you buy the rest of it. It was a model that helped to build the pedigree of such games as Wolfenstein 3D, Duke Nukem, Commander Keen, and Cosmo’s Cosmic Adventure. Naturally, we have Apogee to thank for perfecting the craft of demos, especially during a time when game developers will notoriously release an incomplete game for full price!

But I digress. 2020 saw the return of Apogee Entertainment, as they aimed to bring the indie publishing staple back to their glory days. In order to prove that they were a true pedestal for PC gaming, they needed to find a new golden child to prop up to the masses. Trigger Happy Interactive’s Turbo Overkill might just be the game Apogee needs, as evident by its first episode. 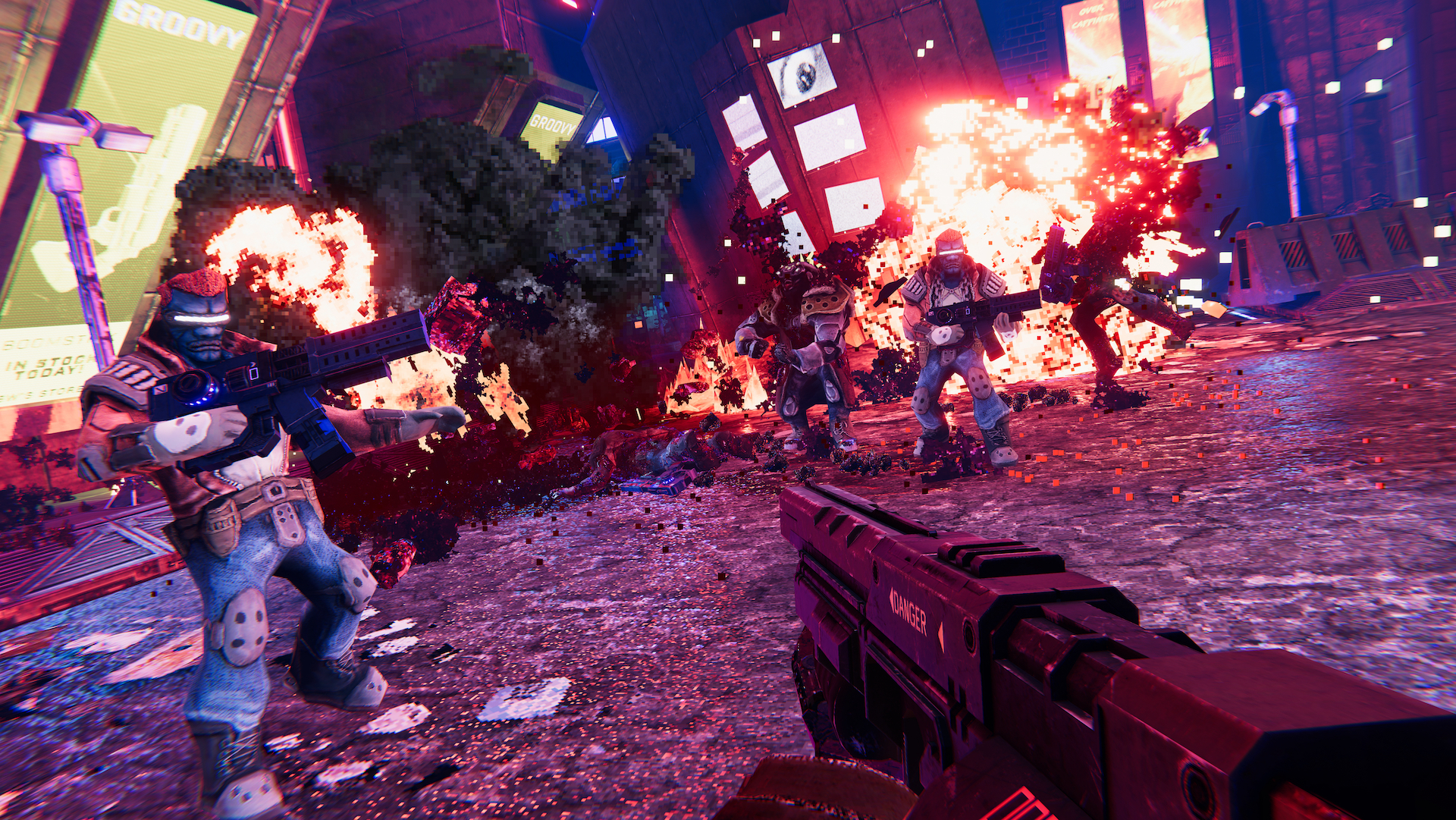 Currently on Steam Early Access, players can experience the first full part of Turbo Overkill. Taking playing in the cyberpunk city of Paradise, the game follows Johnny Turbo and his quest to take down Syn, an overpowered AI who’s taken control of the city. With dual pistols in-hand and robotic chainsaw on leg, Johnny will stop at nothing to lay to waste the evil that’s soiled Paradise. Fortunately, there are plenty more toys for Johnny to find that’ll aid in his mission.

One of the first thing I noticed about Turbo Overkill is its visual aesthetic. There’s a terrific mixture of modern-day graphics, with some sprinklings of retro VGA pixels. Paradise is damn good to look at, and when you get up close to doors or even trash heaps, you’ll find a little nod to the way first-person shooters used to look like when video games didn’t have Hollywood budgets. It’s a neat little element that not only showcases this game’s homages, but also demonstrates how far we’ve come in the last 30 years of gaming. 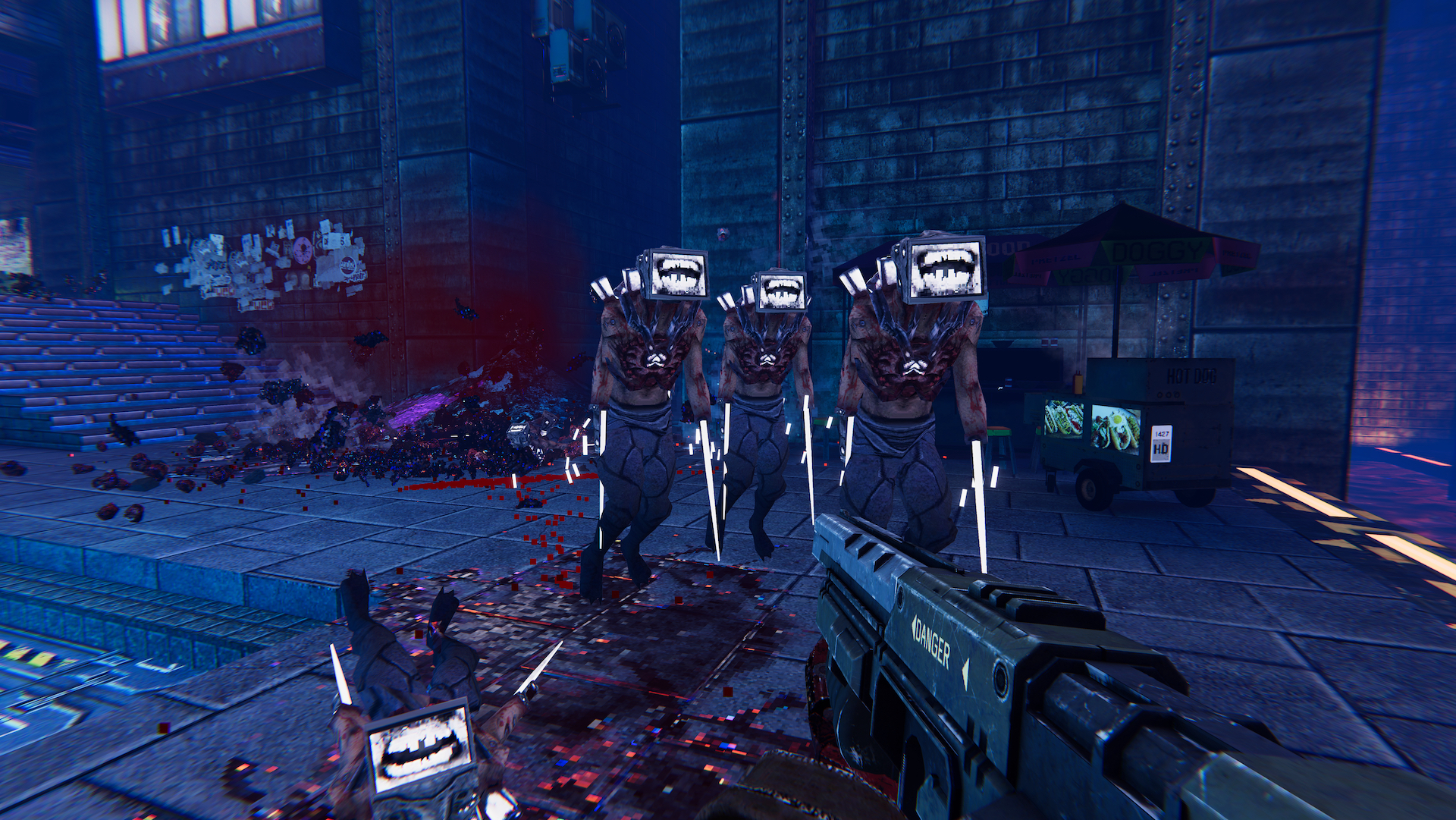 Thankfully, this game isn’t just good-looking; it’s also one of the strongest first-person shooters I’ve played in the last couple of years! Gunning down enemies is loads of fun, even when it feels like you’ve bitten off more than you can chew. The usage of your chainsaw leg also helps take care of multiple foes at once, as you slide and knock down bots and baddies like they’re cyberpunk bowling pins! When you’re able to use your gun’s secondary weapon, that’s where the more fun & strategic parts of the game come into play.

While Johnny can eviscerate enemies just fine normally, being able to use a shotgun’s grenade launcher or the twin magnums’s zapping mechanisms have their perks too. Although they time time to power up, the end result will no doubt make you cackle with glee! These secondary weapons are best used when dealing with some of the bigger boys, especially when it takes far too long for even shotgun blasts to take them down. Switching through your arsenal is also a cinch, as a simple flick of the mouse will quickly flip through what you currently have in your holsters. 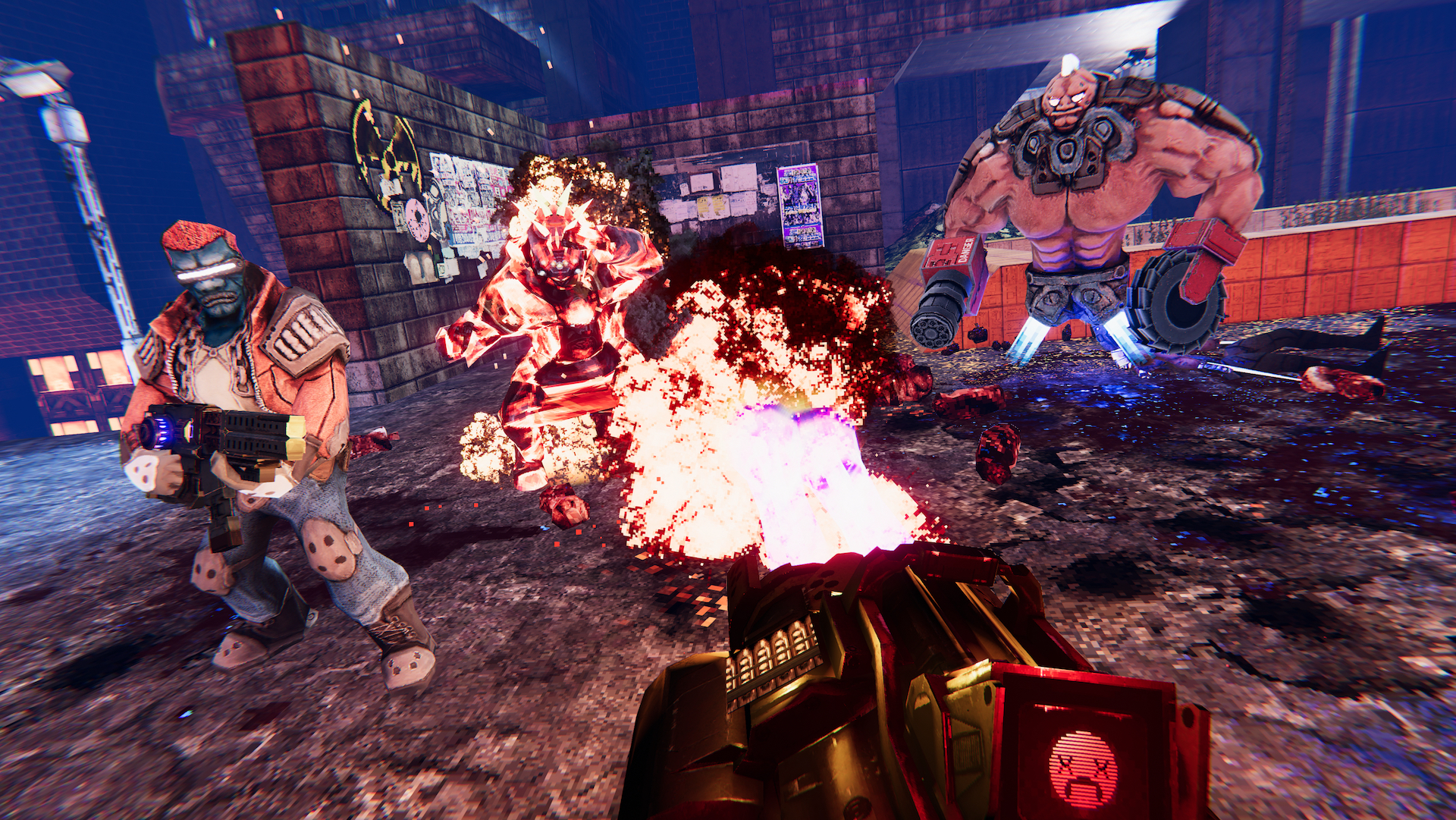 On the plus side, Turbo Overkill controls well using mouse and keyboard. Even someone like myself who rarely plays PC games like this has no issues with shooting, sliding, and wall-running through levels. Its aiming system is also top-notch, with some solid targeting that’ll get your kill even from far away. Unfortunately, while the traditional controls are pitch-perfect, its game controller option still has some bugs that need to be tinkered with.

I initially started playing Turbo Overkill with an Xbox One controller, and at first things looked great. Aiming and shooting was just as fluid as playing a modern DOOM game, although I had to change the sensitivity of the X/Y axis due to how fast Johnny spun around. However, as soon as it taught me about the chainsaw leg slide, that’s when the trouble started. Even though there’s a button set aside for said slide, no amount of pushing or button-mashing could get it to work. Considering it’s a key maneuver that both takes out enemies and has you get through tiny holes, having it not work shows that someone from Trigger Happy Interactive needs to do some more tinkering. 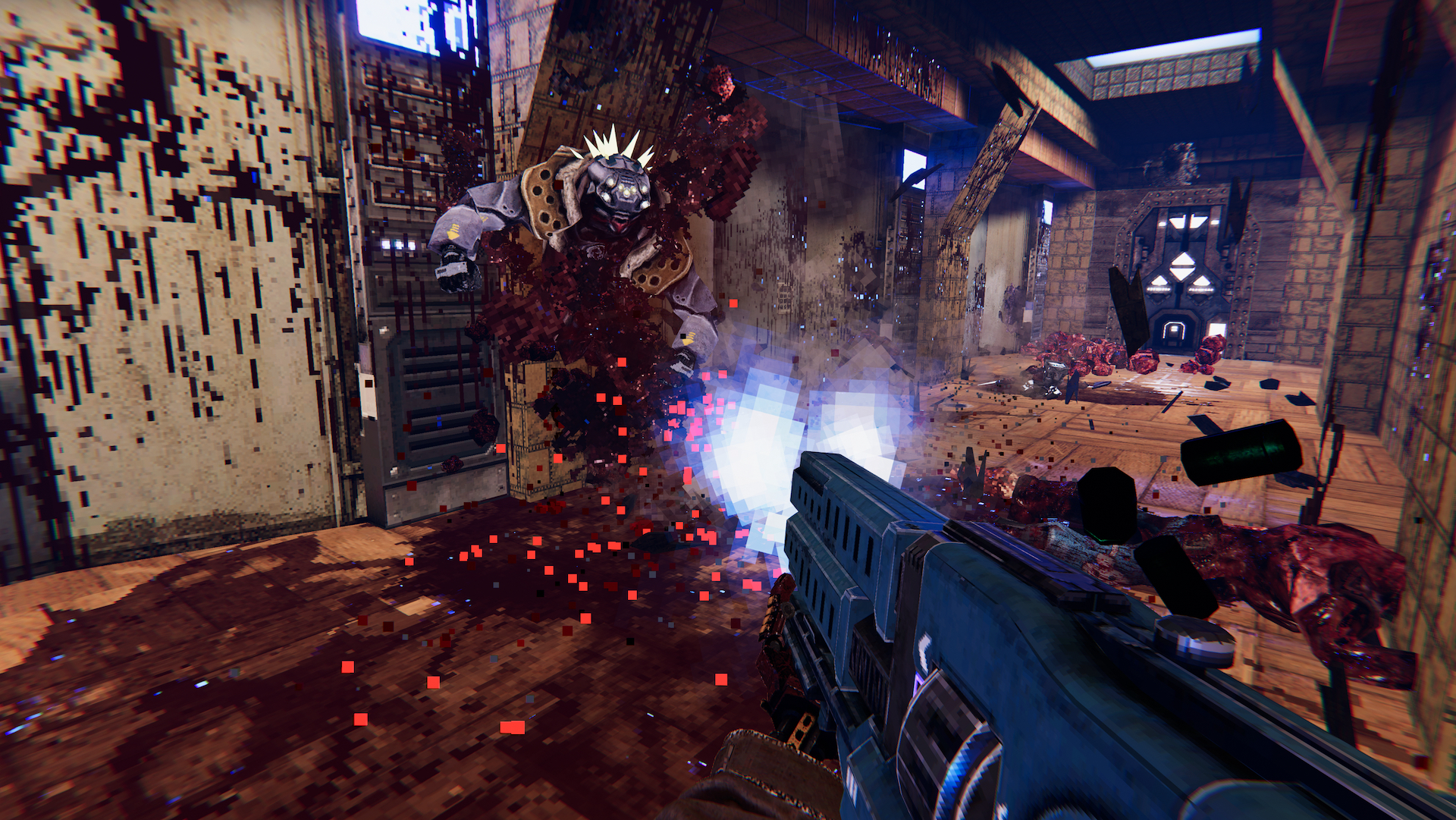 It’s also very easy to get lost in the world of Paradise. Despite it being a linear experience, I often found myself unable to find the next spot I needed to go to. As one needs to retract to past parts to complete the levels, it made it difficult to figure out where the next location was. Only a couple of times did a symbol pop up in my peripheral that showed where too head next; this needs to be implemented more!

Part One of Turbo Overkill will take you roughly 6-7 hours to complete, a timeframe that’s surprisingly longer than most full modern games in its genre. (Looking at you, Shadow Warrior 3!) There’s been no word on when the full game will be launched, which will make the wait for Johnny’s next chapter a little unbearable.

Turbo Overkill is how first-person shooters should be executed! It’s fast, fun, gorgeous to look at, and over-the-top with its violence. If the full version of Turbo Overkill can implement the good time feels at this level, then Apogee Entertainment will have no trouble wall-running back to the top of the PC gaming world!