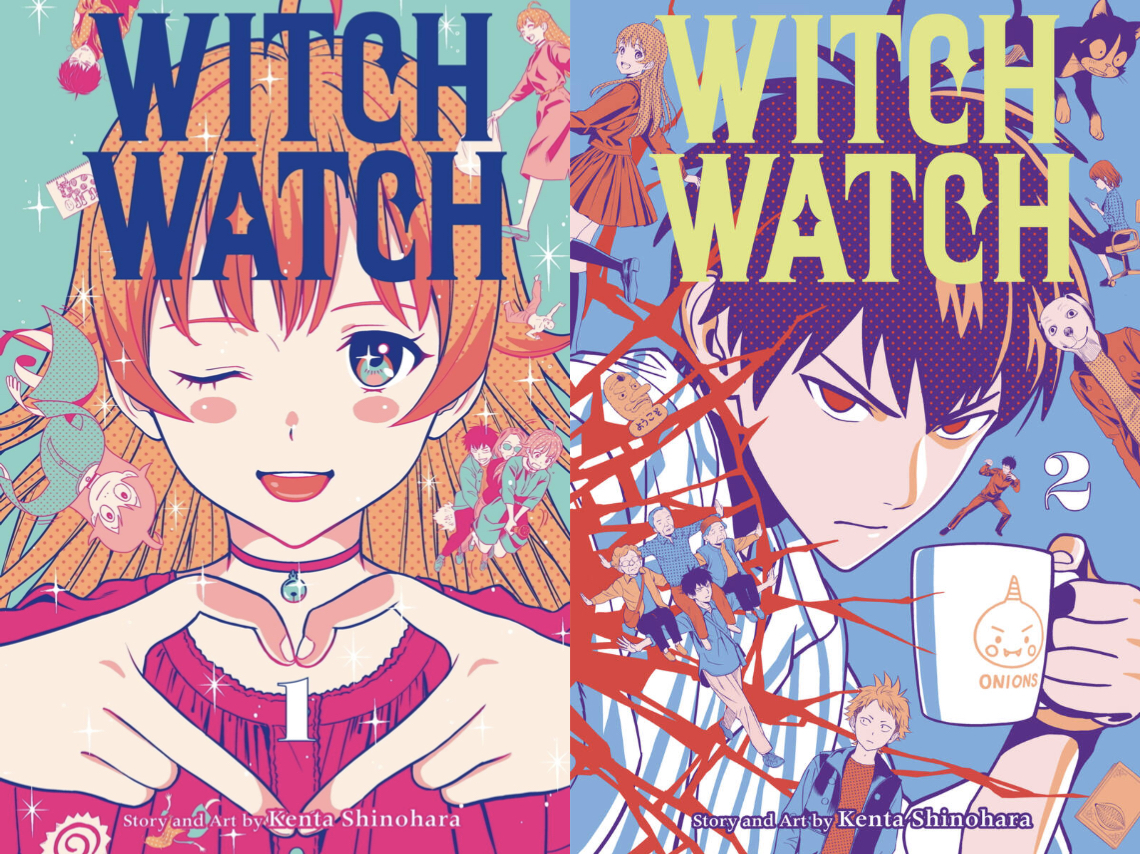 As a native of Salem, Massachusetts, the tales of witches have surrounded me almost since the day I was born. From the real stories of the Witch Trials to things of fiction like Hocus Pocus, witches have been prevalent in my realm of sorts. The same can be said about the anime and manga I’ve consumed, from the wondrous world of Little Witch Academia to the laid-back style of Flying Witch. Astra Lost in Space creator Kenta Shinohara adds a new broom-flying heroine to the mix, in the form of the new series Witch Watch.

Following two childhood friends, Witch Watch tells the story of Nico and Moi, the former being the witch and the latter being the ogre familiar. Despite being an ogre, Moi has a regular human form. It’s just that when he needs to use his strength, that’s when his monster power comes into play. This winds up being the perfect reason for Nico to have Moi as her familiar, as her mother has warned that danger is coming towards her. 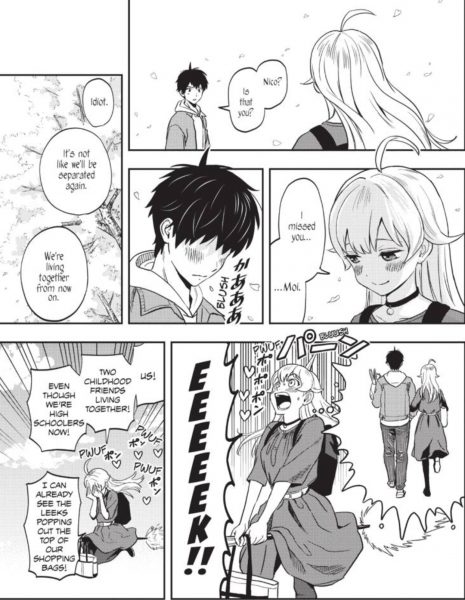 Both Nico and Moi spend their first days under the same roof being re-accustomed to their ways of life. Moi aims to keep Nico’s witchy ways from reaching far too out into the public eye; Nico, on the other hand, needs to help as many people with her spells, as keeping it in too much could result in dark magic building up. The two compromise when it comes to school, with Moi telling Nico to only show a select group of friends her unique skills. However, after flubbing one too many secret spells in a row, Nico’s true self is revealed to the entire homeroom, which takes this revelation…quite nonchalantly.

Much of Witch Watch’s first volume is spent building its world and characters. Right at the start of it all, it’s clear that Nico has strong feelings for Moi, which causes her to keep wanting to impress her familiar. But because she’s still training, almost every spell she casts causes more harm than good. From turning herself into paper to lightening the weight of her and Moi, Nico’s skills have their helpful side, but they also cause a little bit of trouble in the end. 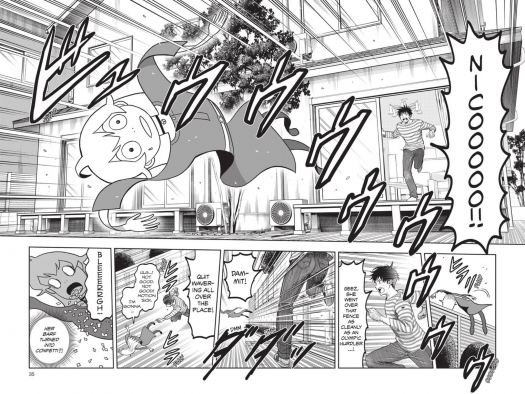 Perhaps this is why Moi acts as the anchor to Nico’s boatload of magic. Thanks to his strength, Moi can keep his word to Nico’s mother and protect her from the great threats that are heading her way. But his power can be a hinderance as well, with many of his childhood friends abandoning him after he beats up a bunch of bullies. As such, Nico tends to bring the sweeter side of Moi out more, showing that he’s not just an angry ogre wanting to smash his way through problems.

These are all good concepts and plot points that Witch Watch plays around with, and they have a good mixture of humor and heart to make these moments shine. But for some reason, many of the ideas that have been showcased thus far run out of gas far too quickly. One of the problems regarding this is the fact that we’ve seen all of these things before in other fantasy comedy manga. Nico returns home to train like Makoto in Flying Witch; she flubs her spells like Akko in Little Witch Academia; Moi ignores her flirtatious ways like many shonen manga protagonists; and the students accept Nico and Moi’s quirks…well, just like every other fantasy comedy to date. 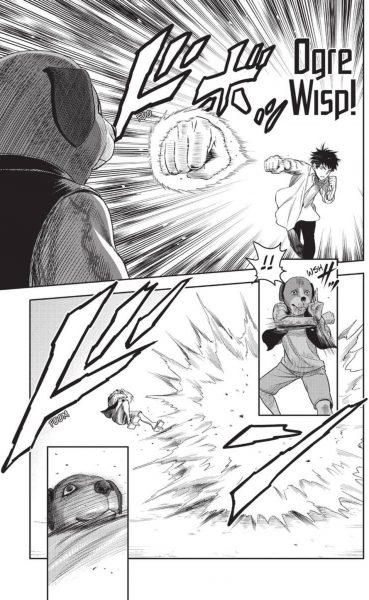 Sadly, Volume Two doesn’t add much to make its story stand out more. While we have the new character Kanshi the Tengu joining the foray, his presence doesn’t add much uniqueness to the narrative. It’s nice seeing Nico having another person she can confide her feelings for Moi to, but — as you quickly find out — both of their intelligence levels result in her quest to confess at a standstill. As a result, it causes Witch Watch to feel even more generic.

That’s not to say Volume Two is a dull read; there are some good comedic moments on display. Seeing Kanshi attempt to get some sort of rise out of Moi is entertaining, with the oni not following through with his kind’s hatred towards the tengu. An entire chapter about a classmate using Nico’s spell to take a secret bathroom break is filled with hilarity, as his quest to get to the toilet is endangered almost at every turn. There’s also a unique villain that shows up via a new article of clothing for Nico, with a resolution that brings a bit of fan-service for the enjoyment of its readers. 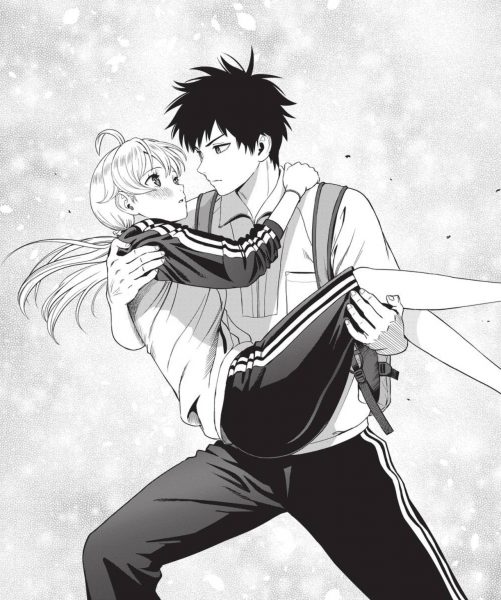 The first two volumes of Witch Watch has some good ideas, as well as a strong chemistry between its two leads. With that being said, it doesn’t quite know how to go all the way with its better concepts. It’s a fun read, no doubt, and it has plenty of potential to grow. But for now, Witch Watch showcases enough charm to be a decent story, although it should be aiming for greatness.