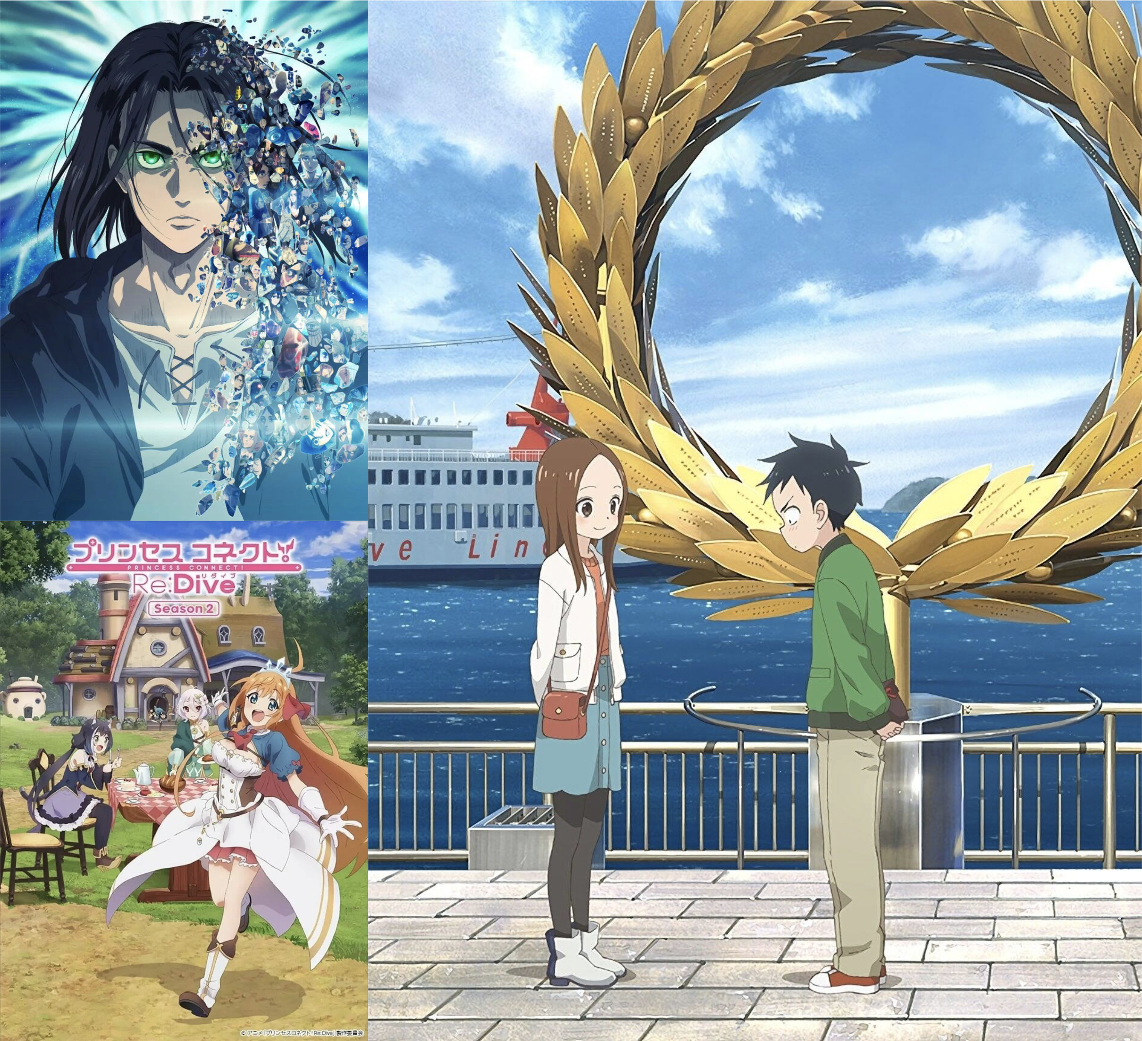 Giant behemoths! Food enthusiasts! Two competitive kids! The Winter 2022 season had a couple of much-anticipated anime making their grand return! Did they manage to deliver on their hype, or was it all deflated? Let’s find out… 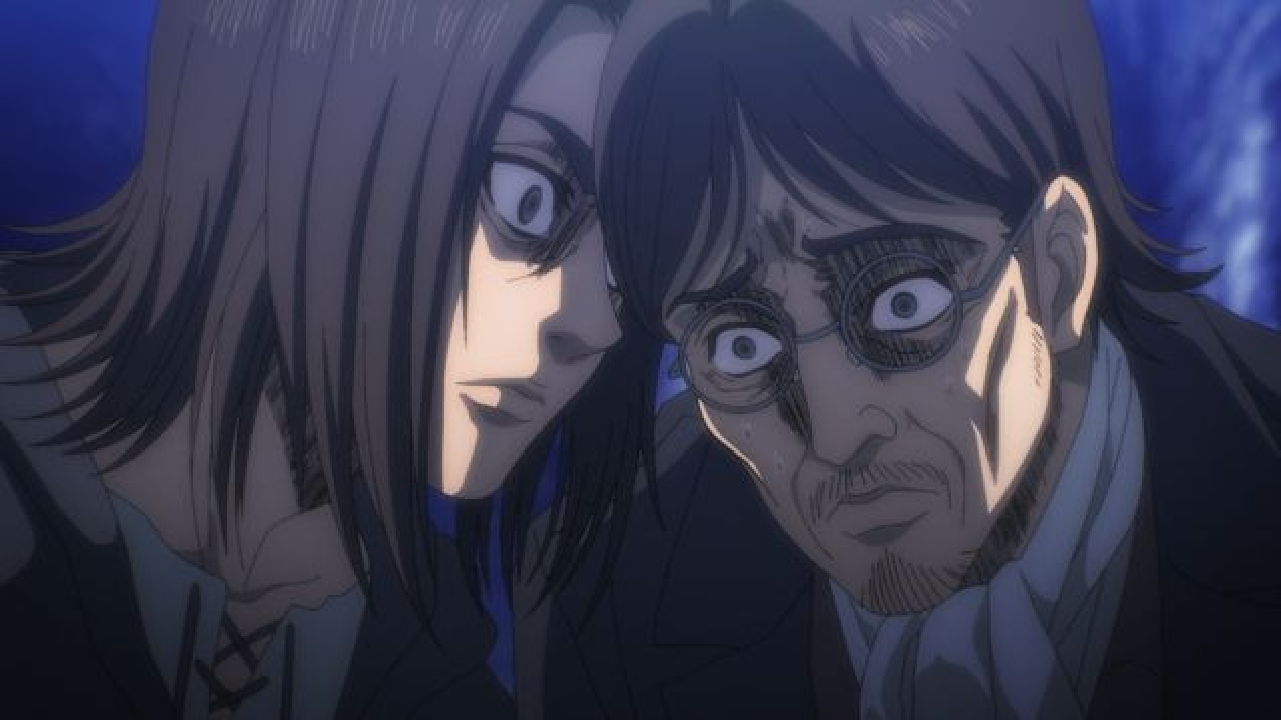 Okay, real talk, MAPPA: you can’t be splitting a final season into (now) three annual parts! When you call something a final season, one expects to see the end of the show! I will personally consider this season of Attack on Titan its fifth, and not a stretched-out fourth & final. Now with that out of the way, the praise can now be showered by just how good this latest chapter of Attack on Titan has been!

Levi is out of action, and now Eren and Zeke are having a mental battle over what the true solution to this long fight is. Zeke wants to end the Edlian bloodline via euthanization; Eren wants to destroy the rest of the world to save his people. And when a decision has been made, no one could predict the kind of chaos that would be unleashed. It leaves even Armin and Mikasa baffled by what’s happening, as the Founding Titan leads an army of Colossal-like titans towards the ends of the earth to bring an end of times to those who oppose the Eldian people. 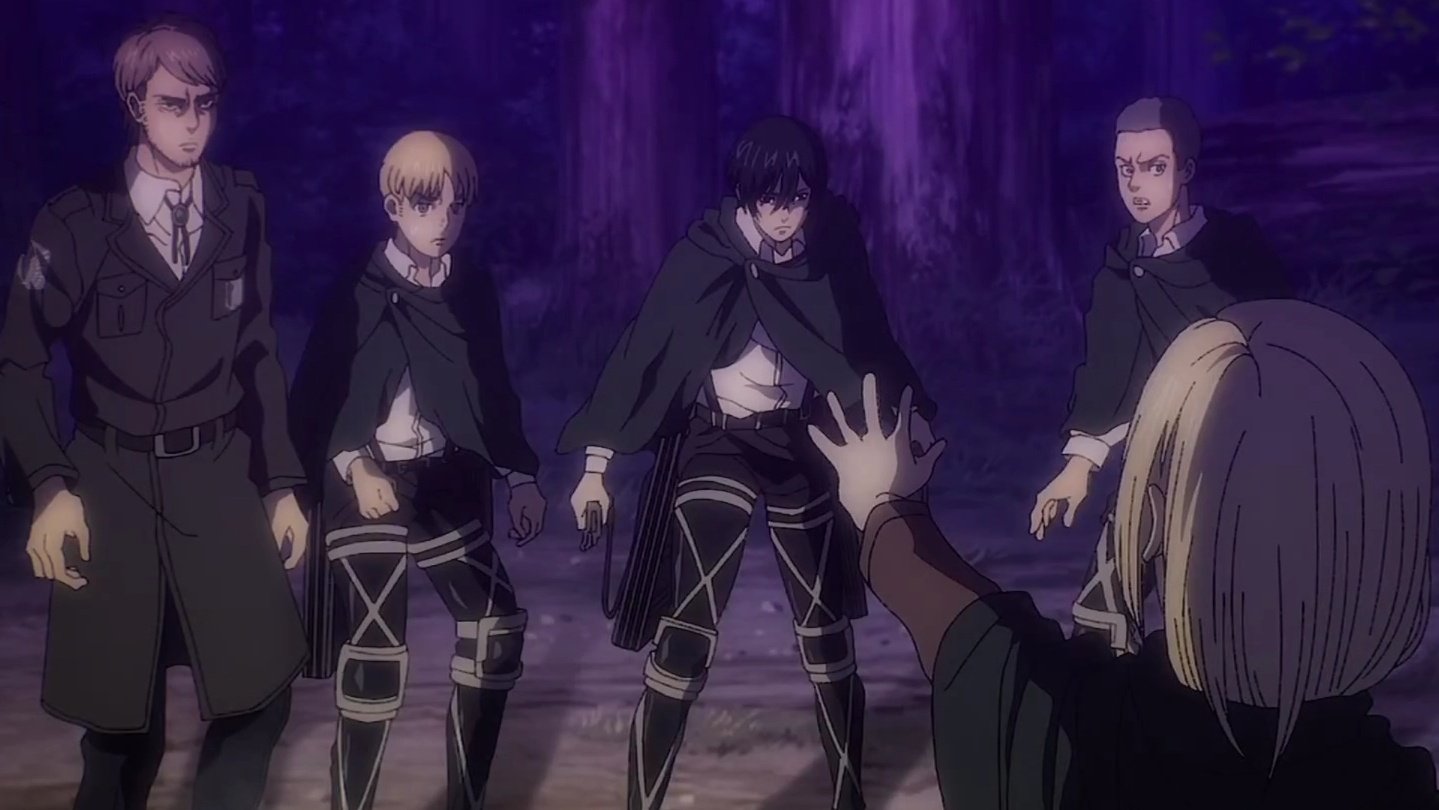 This final season has demonstrated well the true costs of war. There are no heroes or villains, nor are there perfect plans to end drawn-out battles. All that’s there is people trying their best to survive terrible atrocities that the higher-ups have forced them into. The fact that the only two solutions to end the war will both result in a terrible number of deaths showcases just how awful war actually is.

Even when a decision is made, one cannot feel good watching the plan be initiated. With Armin, Mikasa, and the rest of those with level-headed thoughts not wanting to sit back to see the destruction unfold, it becomes a race against time to see how they can keep the body count down while ending this senseless fight once and for all. The philosophies, actions, and especially emotions that are on display here are as deep as the wounds this series that cut into these characters, and are just as visible as the scars that those wounds left behind.

Although we didn’t get a legit conclusion here, the second part of Attack on Titan: The Final Season didn’t disappoint in the slightest. What was once a straight-forward fight with man against beast is now a battle between two groups of people with two dangerous ideologies. There are only eight episodes left that’ll be coming in 2023, and one can only wish that Attack on Titan will offer a beacon of hope for a better future. But after what was seen in Part Two, I can’t say that I’m counting on it!

Attack on Titan can be viewed on Crunchyroll, VRV, and Funimation. It has been licensed by Crunchyroll. 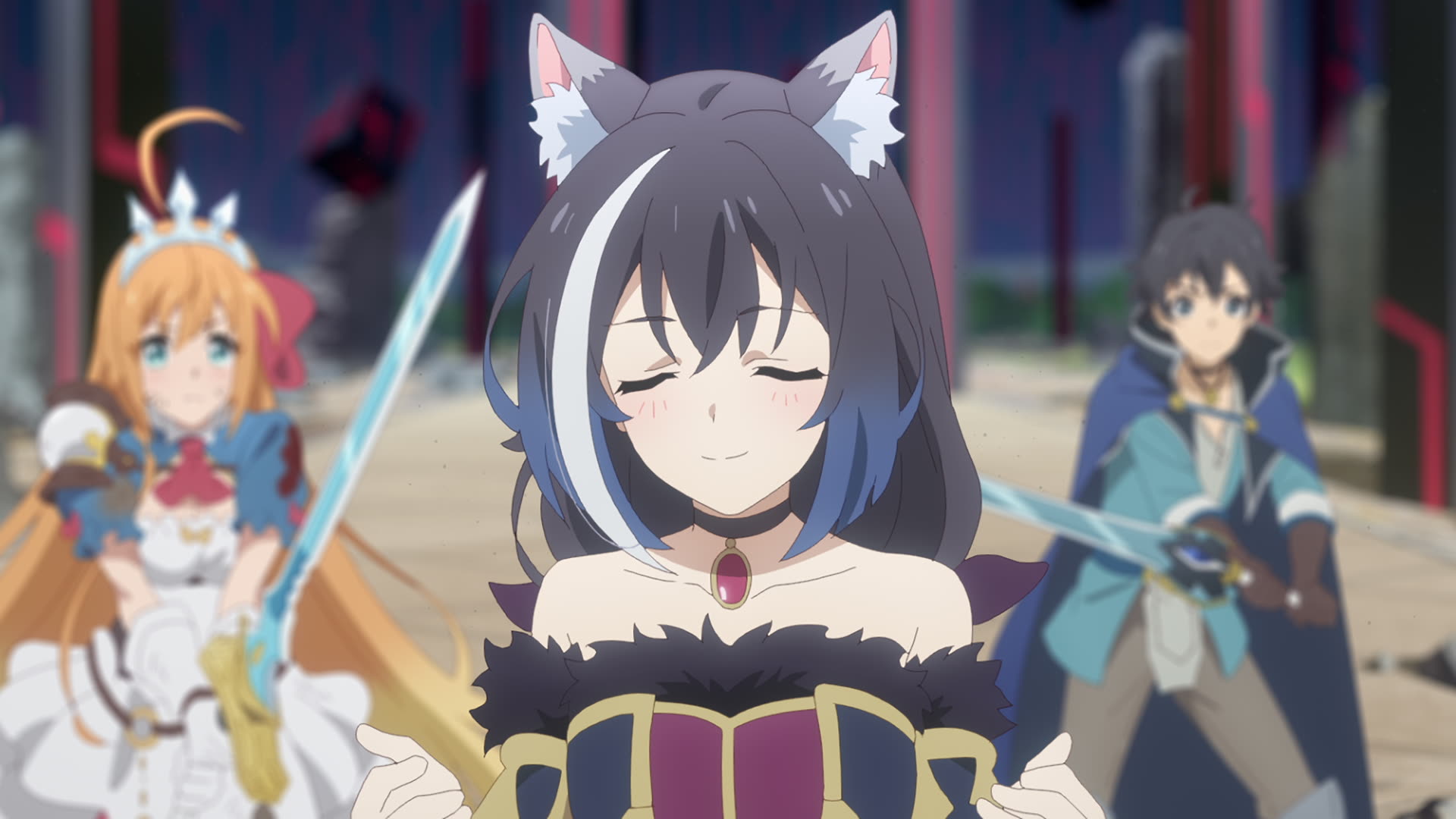 It was surprising to see Princess Connect! Re:Dive given a second season. Granted, it’s a very popular gacha mobile game, and its first season had its followers. (It also helped that it was directed by the man who brilliantly brought KonoSuba to life.) But from a story perspective, the tale of Gourmet Guild was good, but never mind-blowingly brilliant. For the most part, Season Two is the same, albeit with more focus on the dramatic than the comedic.

A lot of the focus this time is placed on Karyl, who is still working to assassinate Pecorine under the orders of Mana Senri. While there are moments with the rest of the party (especially the amnesiac Yuuki), many of the episodes focus on the dynamic between Karyl and the true princess of the kingdom they reside in. However, instead of shedding tears of joy, there’s more shed over the pain of being forced to fight one another, along with the pain of hiding the truths behind their backgrounds. It leads to some good conflicts between the two friends, especially when Mana Senri pulls the strings to create chaos between friends and unto the place their reside.

With that being said, I feel like this whole storyline could’ve been summed up as a movie rather than a twelve-episode series. Sure, Season Two of Princess Connect! Re:Dive had its shining moments, but they were lost in a clutter of plot lines that were okay at best. Yes, the animation was superb, but great animation doesn’t equate to a great anime. I’m glad that we got to hang out more with Pecorine, Yuuki, Karyl, and Kokkoro; I just wish they didn’t overstay their welcome.

Princess Connect! Re:Dive can be viewed on Crunchyroll and VRV. It has been licensed by Crunchyroll. 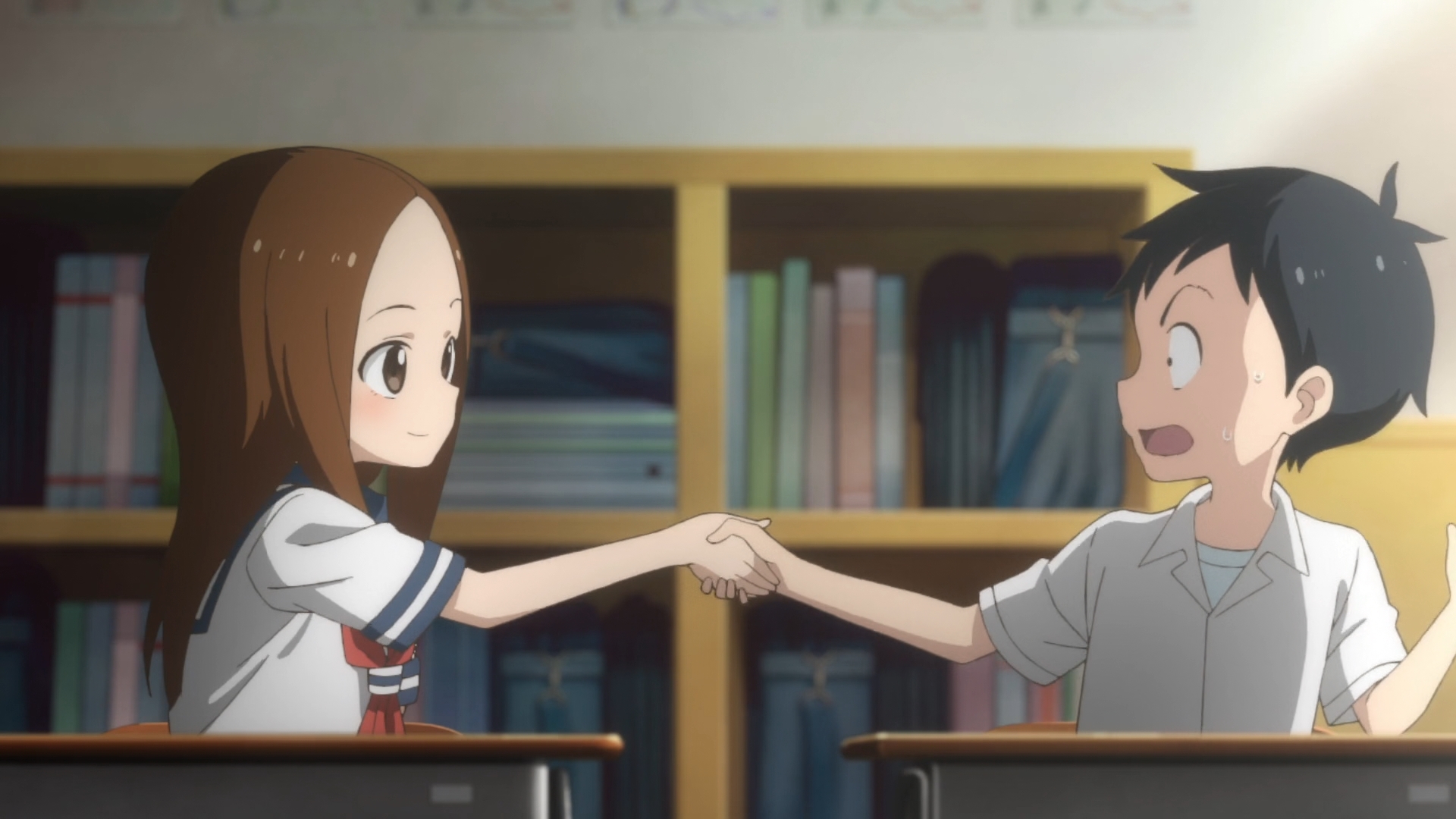 First the bad news: in order to watch all three seasons of Teasing Master Takagi-san, you have to have three different streaming apps. Season One is only on Crunchyroll, and Season Two is currently only on Netflix. To view its most recent season, you’ll need HIDIVE. It’s a lot of work just to watch a series as a whole, especially for a slice-of-life anime.

Here’s the good news: if you can manage to jump through all of those hoops, then you can say you’ve watched quite possibly the best anime rom-com ever brought to the small screen!

The dynamics of Teasing Master Takagi-san haven’t changed much, as Nishikata keeps trying to one-up Takagi in games & pranks of wit. But this time, Takagi’s doing her best to let her feelings for Nishikata be heard. From sneaking in love confessions during library duty to embracing him during a fishing trip, Takagi’s going all out to show how much she loves Nishikata. Alas, Nishikata is slightly dense to Takagi’s true feelings and intentions. 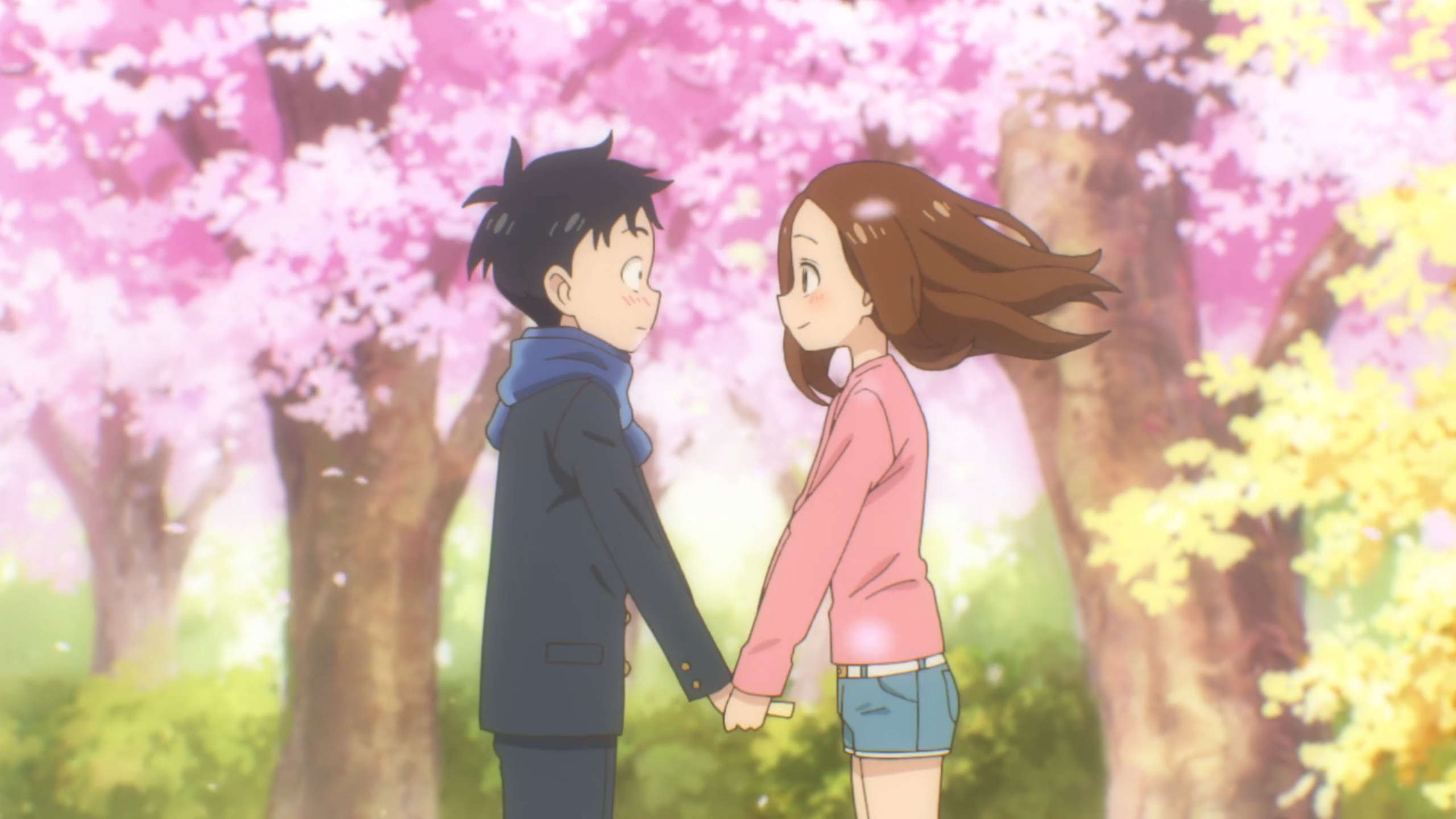 However, Nishikata’s starts getting inklings of Takagi’s feelings. He runs back to her during a rainy storm to let her walk home under his umbrella, and even gets slightly jealous when Takagi knits something for a certain boy. (Takagi also is guilty of this during Valentine’s Day, as Nishikata’s locker is filled with chocolates from mysterious classmates.) But when it comes to the moments when things start to click, this season of Teasing Master Takagi-san is chock full of them!

A school play has Nishikata take over the prince role in the last scene, resulting in Takagi blushing with glee. Christmas brings the duo to a big-screened version of their favorite anime, with the night ending with some heartfelt gift-giving. And then, there’s the finale revolved around White Day. There were sounds that came out of my mouth that should be unnatural for a 37 year-old, but my God, they were well-warranted for the events that unfolded!

Honestly, I can’t think of the last time a rom-com had me smiling ear-to-ear at every moment that flashed before me. Season Three of Teasing Master Takagi-san delivered everything, and then some. While My Dress-Up Darling is setting the stage for the next generation of rom-coms, this tale of two middle school kids learning about how they feel for one another sits comfortably on its royal throne. If its upcoming movie adaptation delivers the same feelings as this third season, then you can easily consider Teasing Master Takagi-san the greatest romance story ever told in anime!

Season Three of Teasing Master Takagi-san can be viewed on HIDIVE, and has been licensed by Sentai Filmworks.