HomeAnimeANIME REVIEW | In the Shadows, "The Vampire Dies in No Time"

ANIME REVIEW | In the Shadows, "The Vampire Dies in No Time" 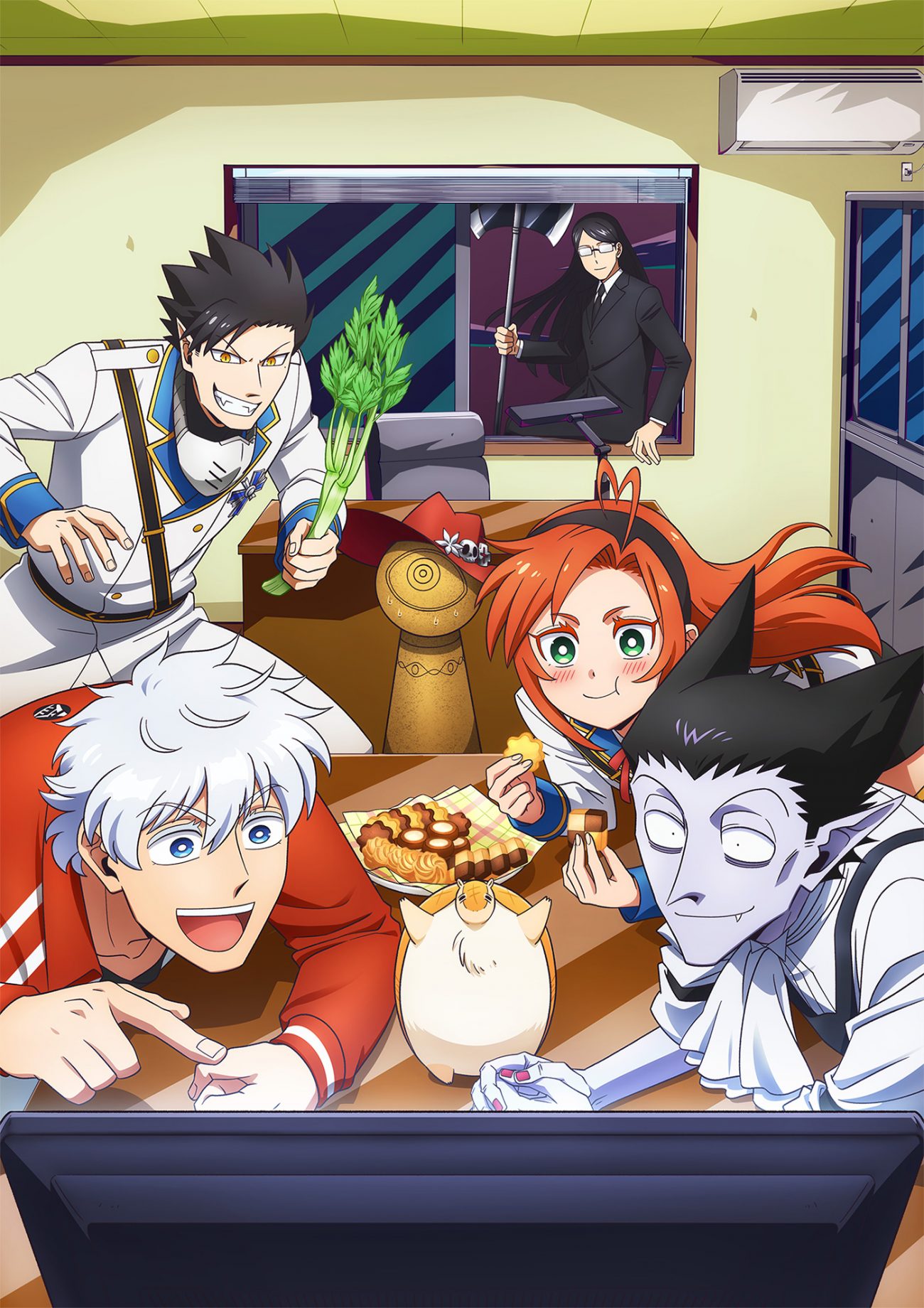 ANIME REVIEW | In the Shadows, "The Vampire Dies in No Time"

Vampires are no longer a threat in fiction; they’re also a source for great laughter. Taika Waititi and Jemaine Clement’s What We Do in the Shadows franchise is the best example around, as it takes a mockumentary route to bring about new, exciting, and hilarious traits about our favorite bloodsuckers. But in anime, vampires lack any sort of comedic timing (and yes, I am throwing a jab at Mamoru Oshii’s horrible Vlad Love here!). Fortunately, someone found the right way to bring the funny to the Draculas of the animated realm, in the form of this season’s The Vampire Dies in No Time.

Based on the manga by Itaru Bonnaki, The Vampire Dies in No Time places its focus on Ronaldo, a well-renowned vampire hunter. A job takes him on a quest to seek a vicious vampire that’s kidnapped a child. However, upon arriving at the castle, Ronaldo is given a rude awakening: the vampire Draluc wasn’t just framed, he’s actually the weakest of his kind! Things get worse when Ronaldo accidentally destroys Draluc’s castle, leaving him and his armadillo familiar John homeless. 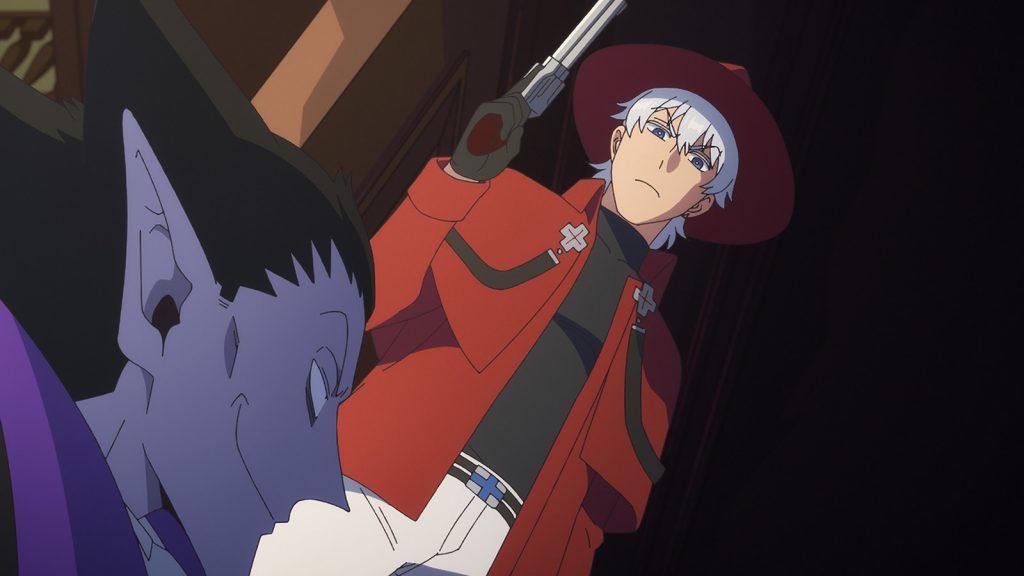 Thus the real story begins, as Ronaldo is forced to house Draluc and John in his office. With his somewhat vampiric knowhow, Draluc aid Ronaldo and the other vampire hunters when trouble arises. But as the kinds of vampires that show up keep getting weirder, it becomes clear that mere stakes to the heart won’t cut it. Of course, with unconventional vampires, there’s always unconventional ways of defeating them!

The strength of The Vampire Dies in No Time rests on the duo of Ronaldo and Draluc. Both characters often switch between the roles of the comedic folly and the straight man, depending on the situation. When Ronaldo is forced to write his next volume of his acclaimed book series, it’s him that becomes the butt of the joke. But when Draluc is forced to use his knowledge to defeat his vampiric “bretheren”, it’s the fanged one that’s often the vocal and visual gag. 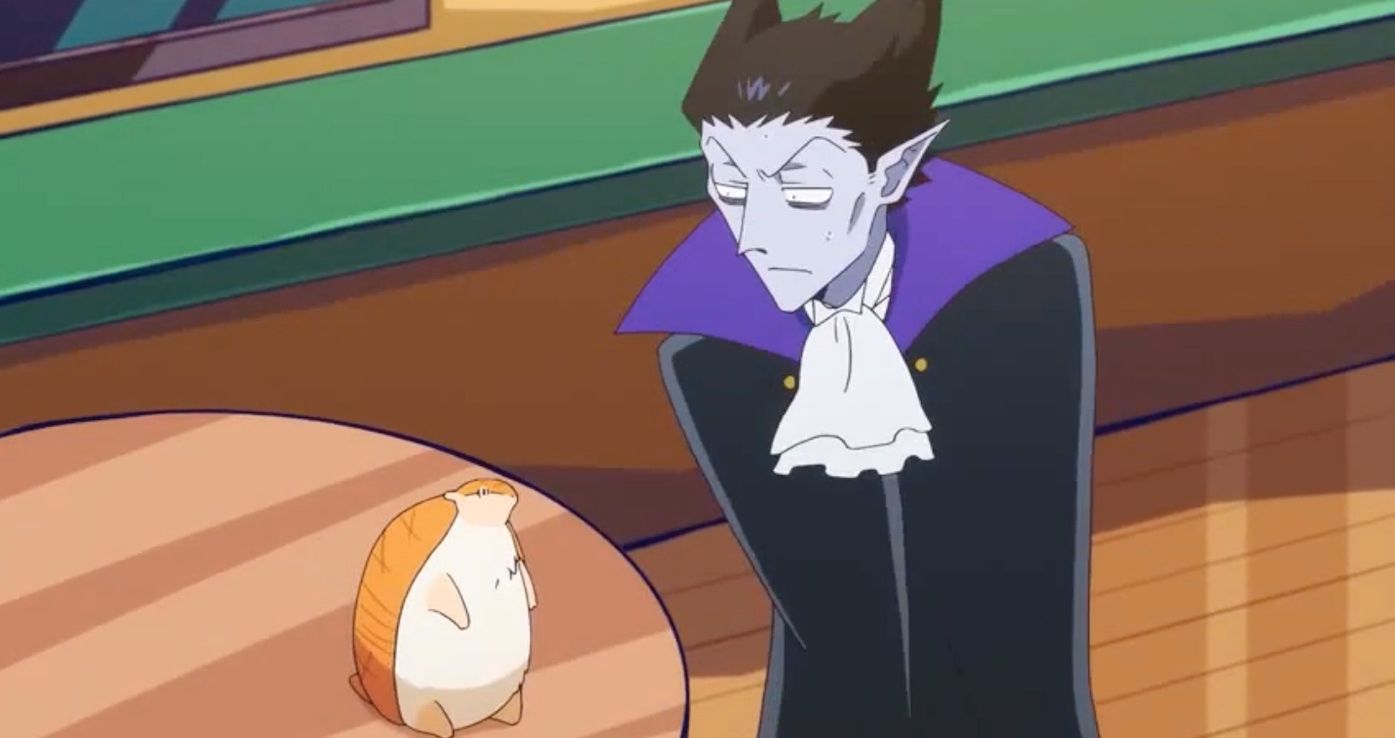 This anime’s name is also quite literal, with Draluc dying on multiple occasions by the littlest of things. Similar to Miyubi in Seton Academy, any tiny hinderance kills Draluc, turning him to sand before he reincarnates. It’s a running joke that has yet to lose any steam, as the sight of him being squished, smashed, splattered, and even turned into a sand castle is practically a guaranteed laugh! (Draluc literally shouting “Sand!” every time he croaks never gets old, thanks to the many ways he bites the dust.)

Surrounding Draluc and Ronaldo are the weirdos that make up the other heroes and villains of The Vampire Dies in No Time. Nuns, crossdressers, RPG-like protagonists, and even a bartender that relishes every moment of mayhem make up the other good guys in the show. As for the villains, they often cross the line between the crazy and the perverted, ranging from ones that make people reveal their dirty thoughts to stripping them down to the tiniest of bikinis that…you may not even want to imagine. And it’s thanks to this crazy cast of characters that the anime works so well! 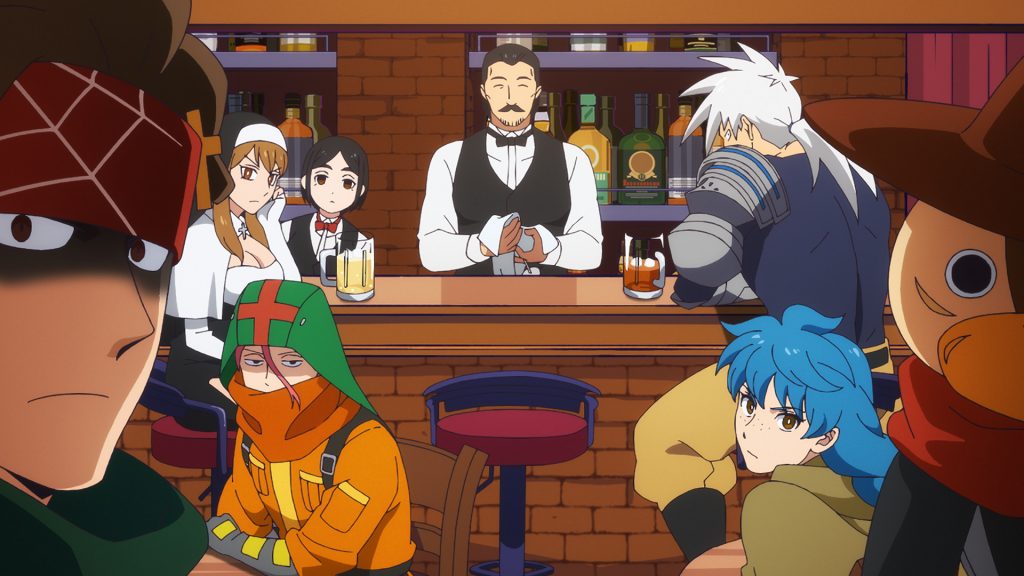 In no time, Ronaldo, Draluc, and even John find their comedic timing either together or in a big group. And very rarely does a gag fail to make its target. Ranging from the truly side-aching to the straight-up adorable (especially in John’s case), the humor shines thanks to every character bringing their own style of humor to their scenes. The animators (and original author Bonnaki) relish on forcing Ronaldo into women’s clothing or discovering new ways to kill off Draluc, but script writer Yukie Sugawara also knows where to deliver some of the best audible gags. I laughed hard when Draluc tells his vampire family that Ronaldo is his male stripper friend, but I almost lost the ability to breathe from Ronaldo’s choice of fake name!

While not the best work Madhouse has ever done, their means of comedic presentation haven’t been this strong since Kamen no Maid Guy. From Draluc turning to sand to the face of Ronaldo when he looks utterly defeated, the animators capture every humorous moment with great glee. It can be a little choppy at times, which sometimes assists with a couple of the gags, but Madhouse gets it done right thanks to the excellent direction of Hiroshi Koujina (Hunter × Hunter, Kiba). 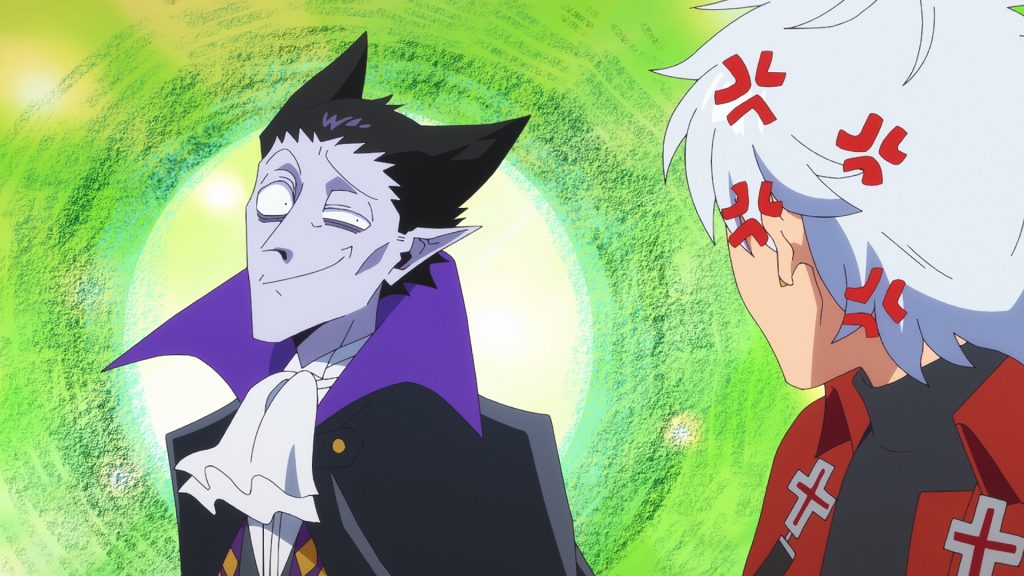 But it’s the voice cast that hit a grand slam in The Vampire Dies in No Time. Jun Fukuyama (Draluc) and Makoto Furukawa (Ronaldo) work off one another like a solid comedy duo. The way they throw jabs and punchlines brings to mind classic Abbot & Costello, albeit with sometimes not the most family-friendly of jokes. In English, Ian Sinclair does a good job switching between hero and complainer as Ronaldo, with his tough guy exterior being broken quickly by his self-conscious mentality. Frank Todaro, on the other hand, is a hoot as Draluc, sounding like Ghost frontman Papa Emeritus IV whenever sounding intimidating or becoming a victim of comedic fodder.

Ryo Takahashi’s soundtrack works best when at its most minimal. Although the more wild songs help to boost the comedy, it’s when the melodies consist of a mere jazz piano where the music truly shines in the show. It’s a sharp contrast to the side-splitting humor that’s witnessed, as the calming sound of ivories being played give way to some of the most smile-inducing sensations. However, the show’s two theme songs are when the sounds are shown with the most life. 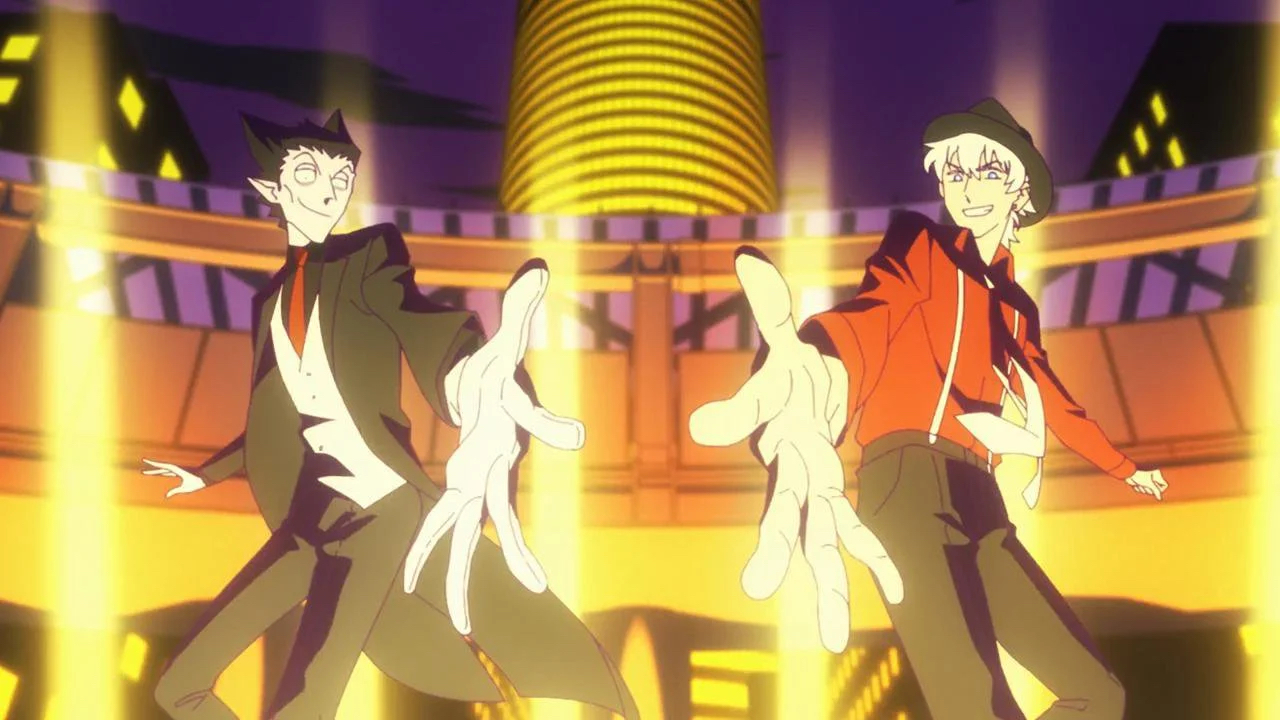 Opener “DIES IN NO TIME” by Fukuyama is a solid big bang pop song, built up by the show’s hilarious (and dance-heavy) visuals. You’ll find yourself snapping along to the beat without warning, with enough feel-good emotions flowing through to make you wanna attempt one of the moves Ronaldo and Draluc pull off (albeit without turning into dust). Closer “Strangers” by Fukuyama and Takayuki Kondo takes a more classic city pop and synthwave route, acting as a good calming track to end a show with a plethora of laughs.

The Vampire Dies in No Time is a guaranteed laugh fest. With its solid voice cast and line-crossing sense of humor, this Fall 2021 anime shines as brightly as John’s shell after a good polish. With no word on when What We Do With the Shadows is due to return, Draluc and Ronaldo’s misadventures serves as a terrific substitute for Nandor, Natasha, and Laszlo’s antics. Rest assured, watching The Vampire Dies in No Time will make you laugh so hard, you might find yourself turned into a pile of sand yourself!