As I sat there watching Vlad Love, I suddenly felt my eyes becoming heavy. It was as if something was draining the life essence out of my body. At first, I thought it was just due to me recovering from my recent wisdom tooth extraction; however, I realized quickly that that wasn’t the case. This life-draining feeling I was having occurred when the first six episodes of Vlad Love were unleashed on Crunchyroll, as I marathoned through them with a case of lethargy.

After putting two & two together, I figured out the truth: Vlad Love isn’t director Mamoru Oshii’s triumphant return to comedy; it’s a demonstration of what happens when a critically-acclaimed director goes back to his roots and forgets how they were planted in the first place!

Before becoming a universal icon with Ghost in the Shell, Oshii got his name in the door with his adaptation of Rumiko Takahashi’s classic Urusei Yatsuru. There, he honed his skills as a visual storyteller, bringing both humor and meaning into every frame he crafted. These days, Oshii has done a lot more with live-action films and shorts, with Vlad Love being seen as his comeback to the medium he once reigned supreme. However, what he has managed to create is not only terrible, it’s practically unwatchable! 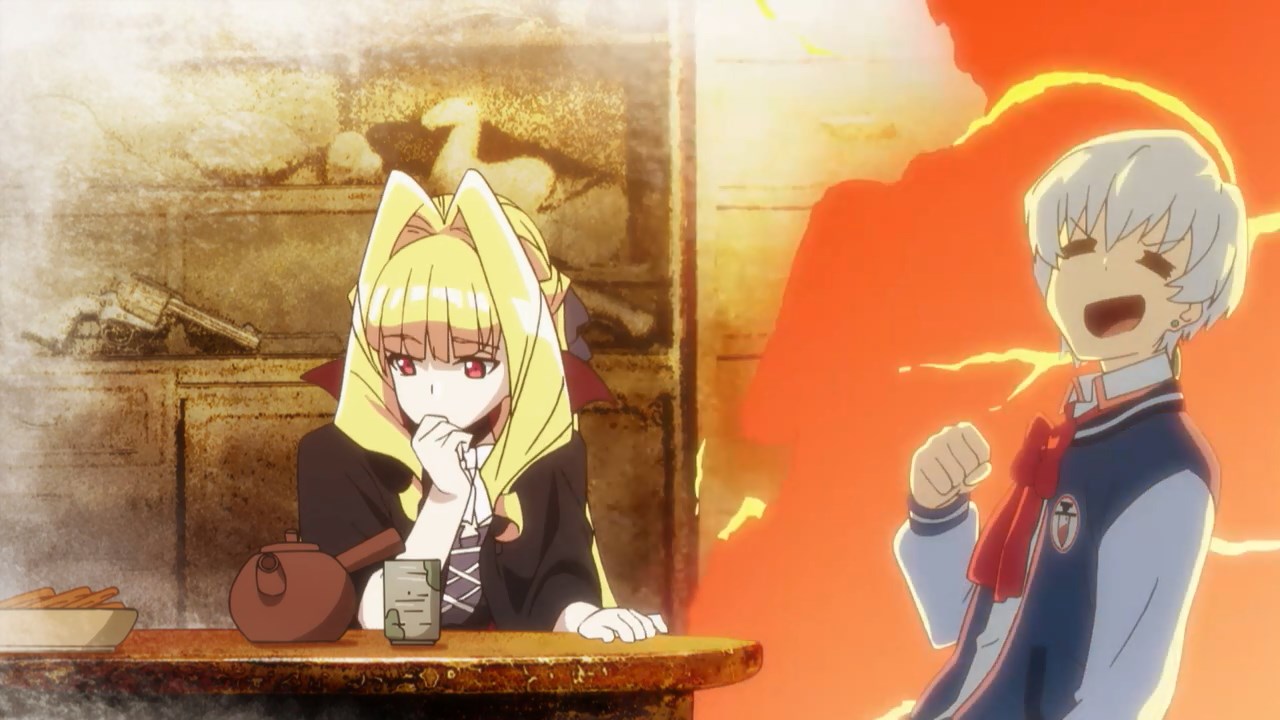 One of the first signs of trouble regarding Vlad Love is its overall narrative, which isn’t exactly clear no matter how much I try to sum it up. Basically, a blood-donating enthusiast named Mitsugi Bamba (Ayana Sakura) finds herself sharing her home with vampire girl Mai Vlad Transylvania (Rina Hidaka). Seeing how she needs human DNA to survive, Mitsugi convinces school nurse Chihiro Chimatsuri (Romi Park) to start a blood donation club. Soon other students join the foray for reasons not exactly clear, from a cat girl (Kanako Takatsuki) and muscle man (Kenta Miyake) to a film enthusiast (Saori Hayami) and a disciplinary chairwoman (Yoko Hikasa).

You’ll notice that I didn’t bother naming the secondary characters. This is where Oshii’s story’s first issue comes into play. Outside of Mitsugi, Mai, and Chihiro, none of the other characters have enough depth to be considered memorable. They feel like cardboard cutouts with a weak soul attached to each one, as they spout nonsense that has absolutely nothing to do with...well, that’s the other big issue here: What exactly is the plot of the show?! 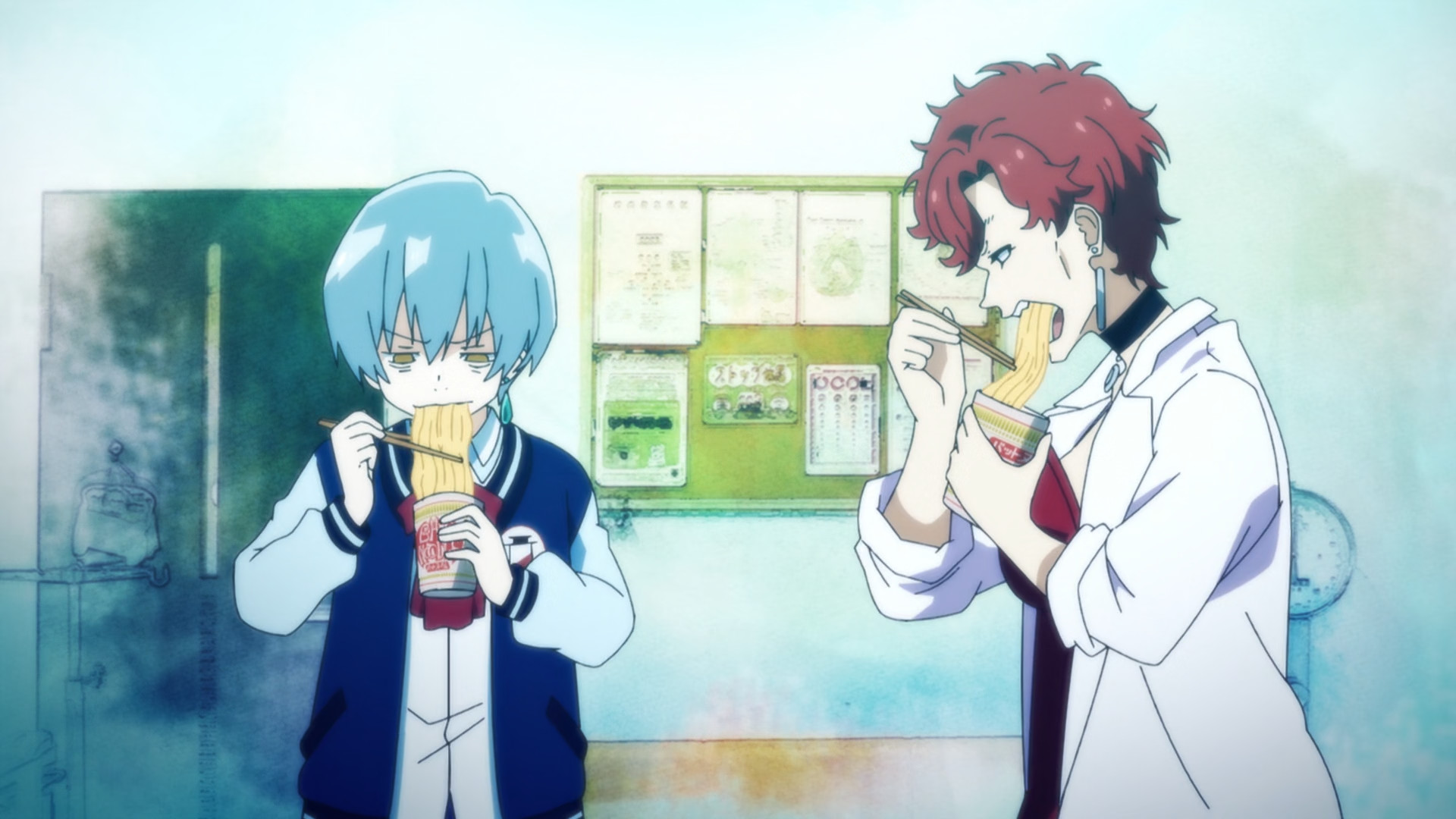 Is Mitsugi attempting to cure her blood donating fetish with the aid of this vampire girl? Is Mai trying to find safe haven from the vampire hunters of the world? Why exactly do these people come to the aid of Mai when they’ve literally just met her and have no idea what she’s capable of? Honestly, not since Dropkick on My Devil have I seen an anime comedy that has absolutely no idea what it wants to be or convey! It’s obviously trying to tell some sort of story, but it’s so confounded and confusing that I’m having difficulty believing that one actually exists!

There are moments in Vlad Love that have me thinking that Oshii didn’t spend enough time flushing out the narrative. These moments, which appear throughout the episodes that I could sit through, are what I would like to call “Almanac Articulation”. It’s when a character makes a reference to some other form of entertainment or a piece of technology, and then proceed to spend at least two minutes explaining what it is. Not only is the delivery of these facts dry, they’re also unfunny and a waste of time. Every moment this happens, I felt bored, unenthusiastic, and stupider! 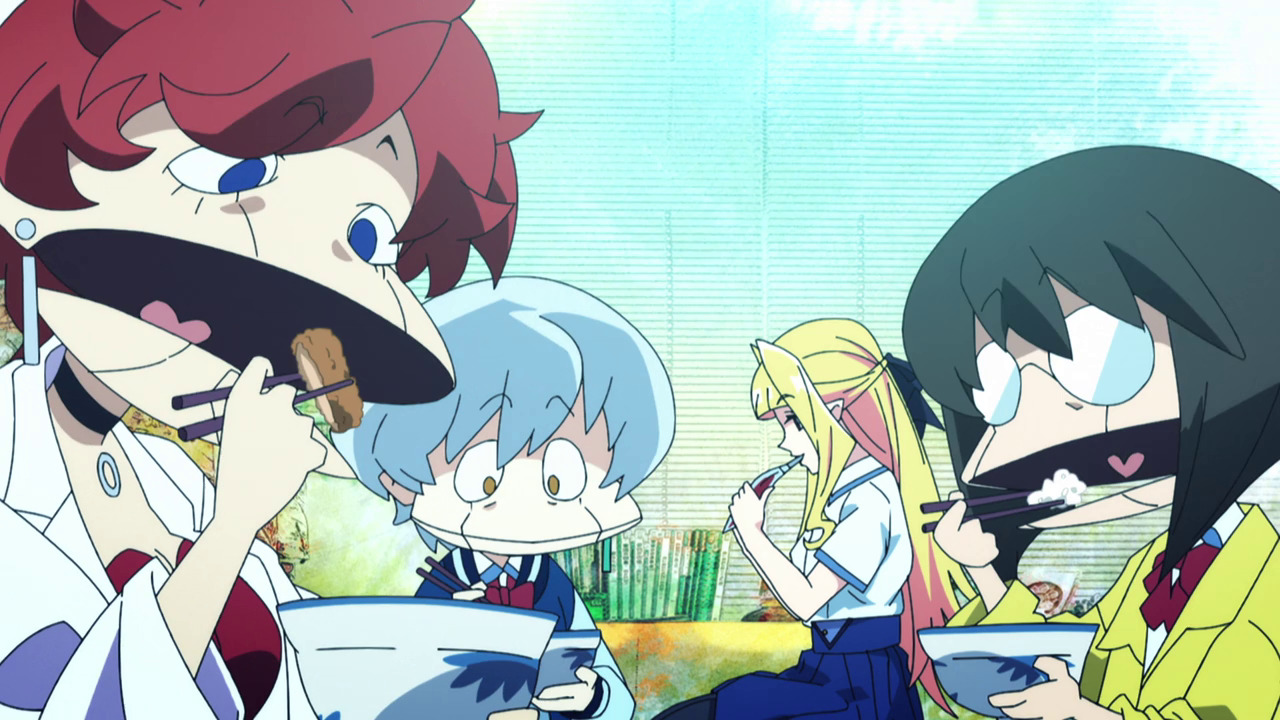 When the anime attempts to move whatever story exists, viewers are treated with visual gags that feel straight out of a classic Showa anime comedy. These visuals are good, but there’s yet another problem: there isn’t a joke attached to them. There’s a reason why Iyami in the Osomatsu franchise goes “Sheh!”, or the titular Miss Machiko constantly says “I give up!”: there’s something funny that happens that leads them to act this way. In Vlad Love, these visual gags follow nothing remotely laughable. It’s merely an excuse for studio Drive to show their creative chops, which is the only real shining beacon of this anime as a whole.

This is a situation where the rest of the staff is trying their best to work with what they’re given. The voice cast is great, with it made up with legendary and current faves in the business. Legendary composer Kenji Kawai (Ranma ½, Barakamon) pulls off a pretty good score, but it doesn’t do well to punch up what’s onscreen. Power metal band Lovebites crafts an opening theme that a show like this doesn’t deserve, with “Winds of Transylvania” being more fit for a badass action series than a show like this. (Even the calmer “Where you are” by Bloodye doesn’t fit the tone of this show!) And yet, no matter how hard the staff and cast tried, they simply could not save this mess of an anime. 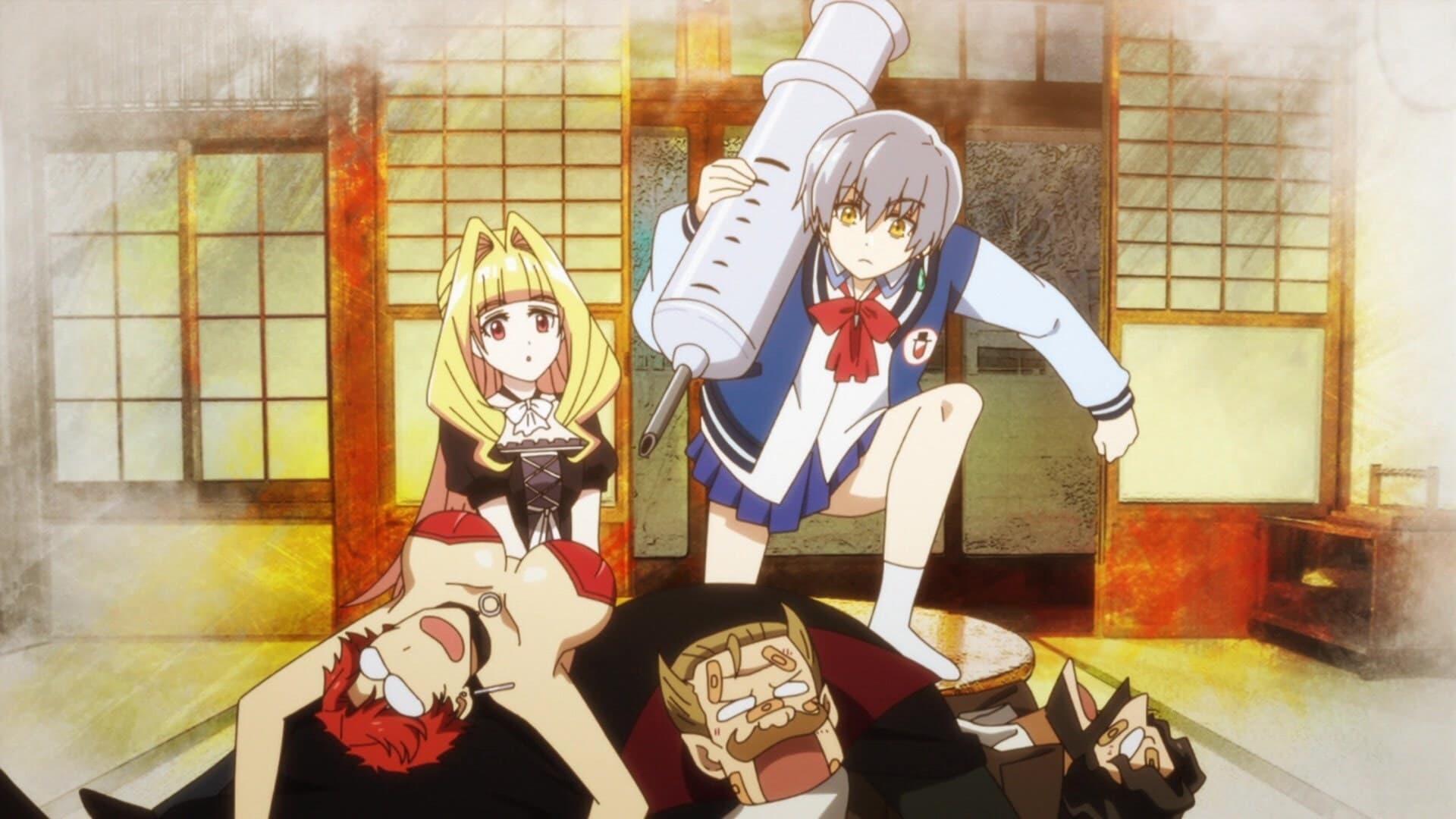 You’ll notice at the end of this review that I didn’t watch the entirety of Vlad Love, which is something that I usually try to do whenever a full series is out there to watch. But Episode Nine broke me. While watching Mitsugi roam through a city that felt out of 1950s Japan, narrating about the soldiers, urologists, and bath house, I kept asking myself, “When the hell is this going to be over?” As I pressed pause to see if the episode was just about finished, I saw that only nine minutes had gone by. At that moment, I exited out of the episode, let out a big sigh, and shouted, “Jesus Christ, this is awful!”

Vlad Love is a terrible anime, helmed by a director that should know better. If Oshii had wanted to make a return to the comedy that made him a household name, he should’ve simply phoned Rumiko Takahashi and asked to make an Urusei Yatsuru remake. This anime is painful to get through, and I honestly don’t recommend anyone go through the torture that I put myself through to properly write about it. Like a good vampire, Vlad Love sucks!

Vlad Love can be viewed on Crunchyroll and VRV. Episodes 1-9 were observed for this review. Promotional consideration provided by Ellation.