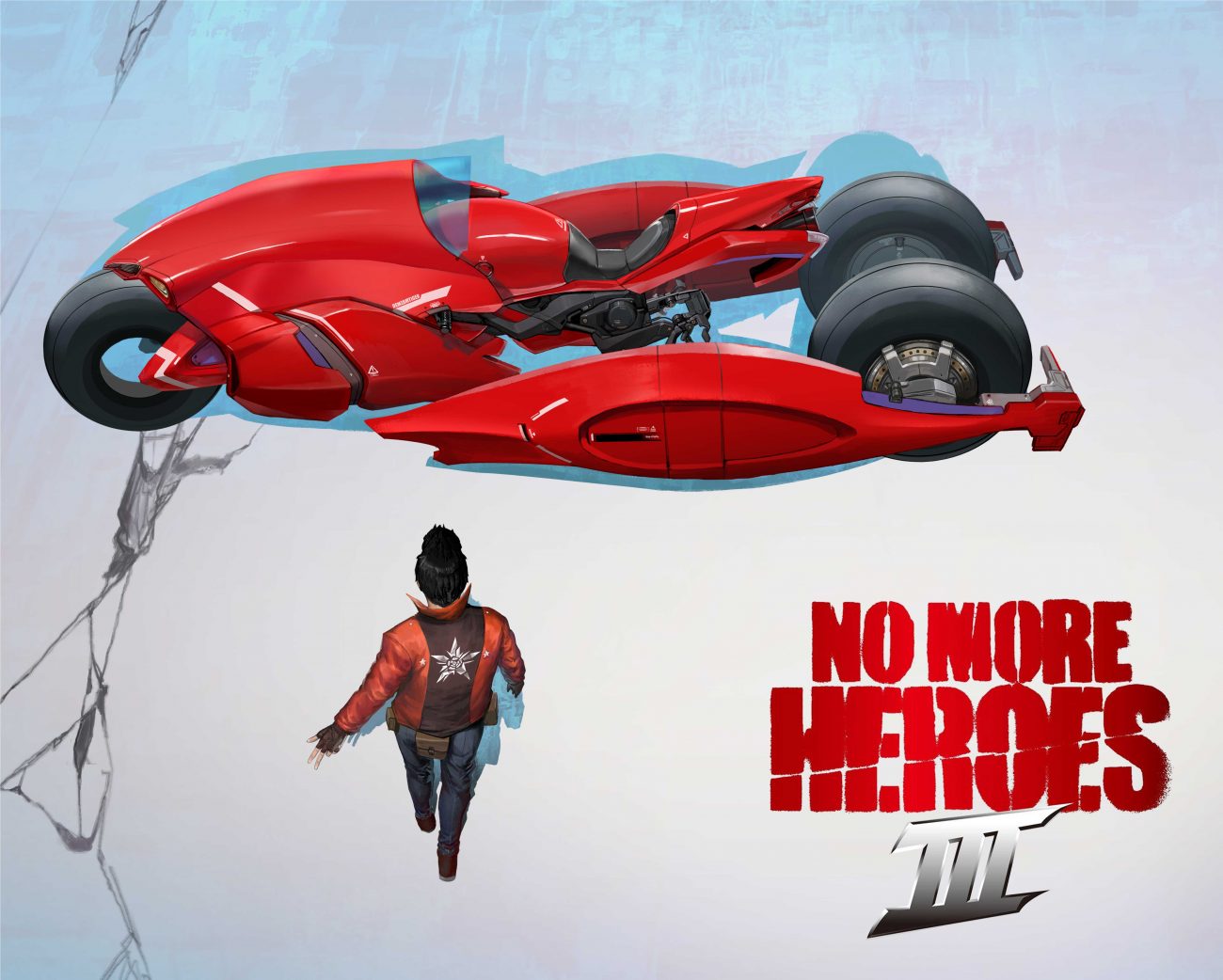 When Suda51 goes all in, he never flinches. Out of all the video game creators out there, he’s one of the few that gives his players everything he can fathom. Be it in cult classics like Killer7 or balls-to-the-wall mayhem gems like Lollipop Chainsaw, Suda51 and Grasshopper Manufacture lack any means of “holding back”. This is very evident in their No More Heroes series.

Since it first appeared on the Wii in 2007, No More Heroes and its protagonist Travis Touchdown have taken players onto an otaku-fueled journey. With its fast wit, unique villains, and the best motion control scheme imaginable, Suda51’s franchise has delivered an experience that is the epitome of the word “badass”. But alas, even the coolest and grandest journeys must come to an end, and No More Heroes III is a rightfully proper farewell to the coolest video game anti-hero ever to grace a console. 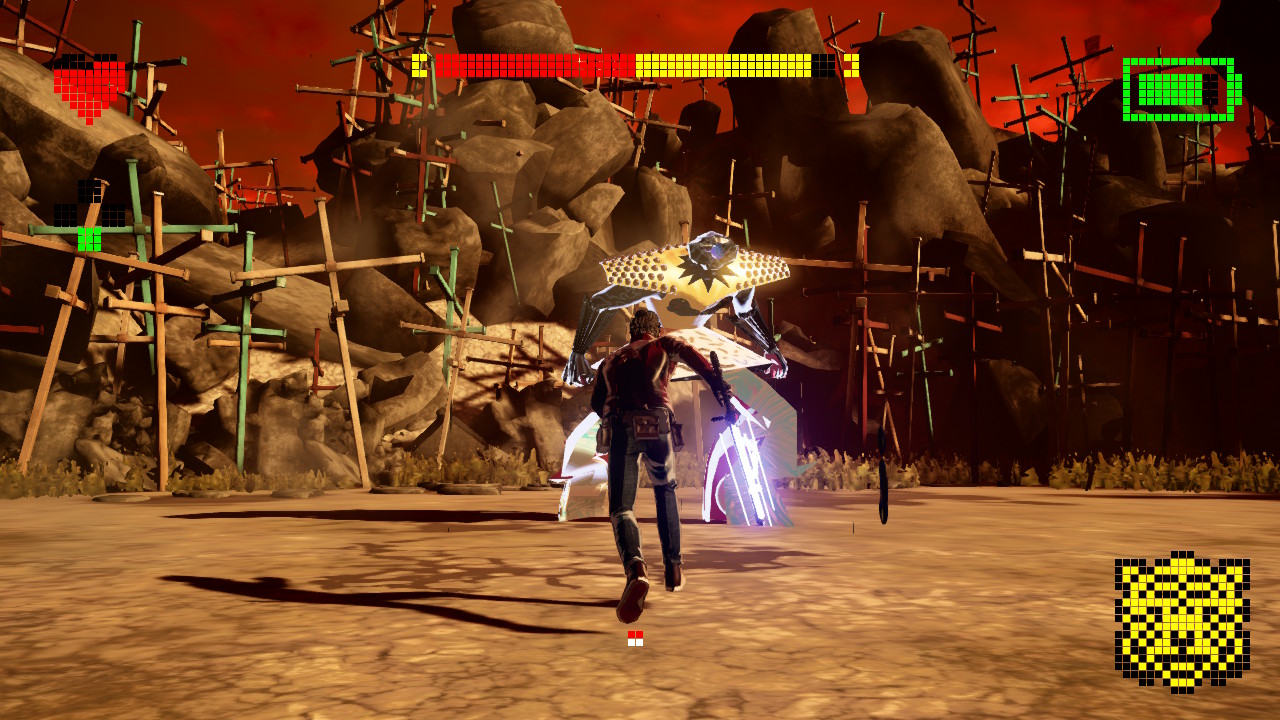 After walking away from the assassination game once more, one would think that Travis would be having to go through all that again. Fortunately, that isn’t the case, as mere Earth assassins just don’t just it for Travis anymore. Instead, it’s a crazed intergalactic prince named FU and his allies that are setting off to conquer and destroy every world they come across. For once, Travis isn’t taking on the role of an assassin; he’s a Goddamn Superhero!

FU’s comrades come from all over the galaxy, and have their reasons for siding with a crazed prince like him. (Yes, even Travis’s wife Sylvia seems to align herself with FU, albeit for good reasons rather than bad.) But Travis doesn’t care who he has to take down, as he always itching for a good fight. However, after the death of Badman and the injuring of Shinobu, Travis has a bigger taste for vengeance than ever before! 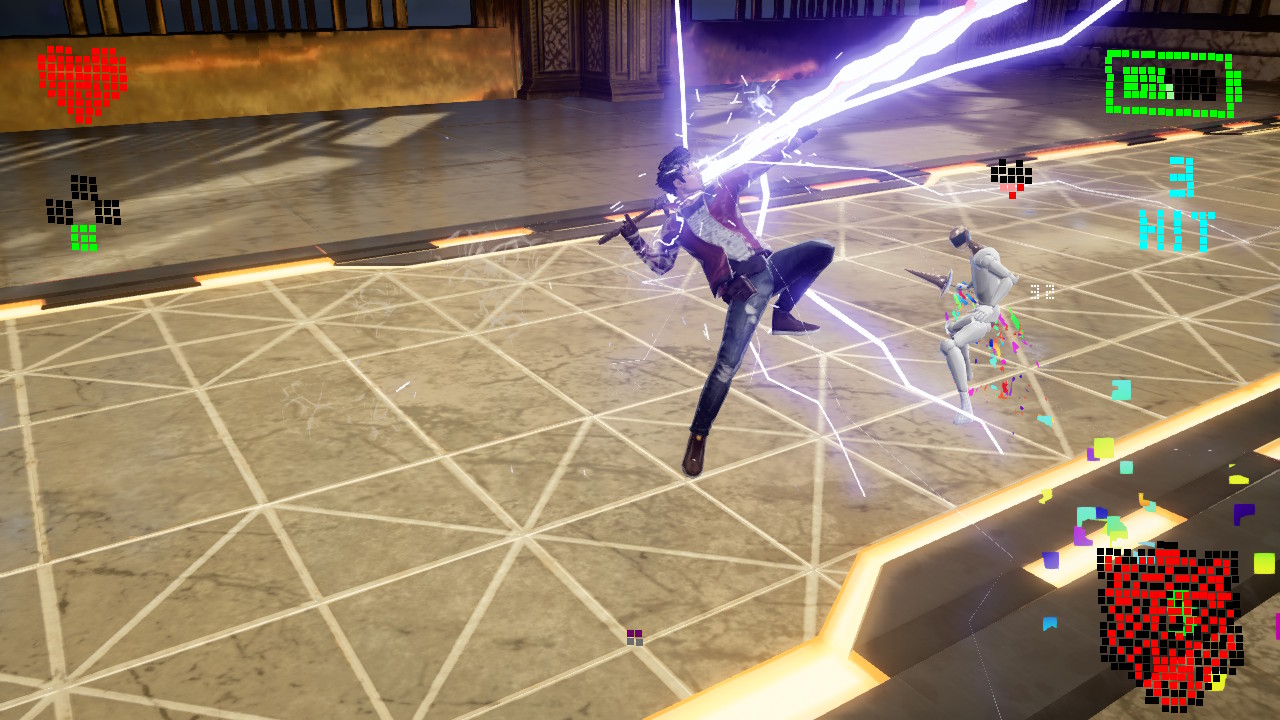 But like past No More Heroes titles, Travis just can’t dive into a match right at the get-go. Despite being Earth’s greatest warrior, the motel-residing electric samurai will need to earn coin before entering the Garden of Insanity. From odd jobs like unclogging toilets and mowing lawns to capturing unique scorpions and taking on crazed drivers, Travis must go through the everyday life struggles of going to work to get that bank. They’re rough jobs, but it’s what Travis does, well, nearly best.

Of course, Travis’s best work involves his beam katana. And when it comes time to throw down, you know that a bloodbath will be in order. Taking down the likes of Blackhole Man, Midori Midorikawa, and even a couple of old returning rivals from past games, Travis using his mighty weapon with the greatest of ease. However, like in Travis Strikes Again, he now has a couple of bonus power-ups he can use to his advantage. Powerful dropkicks, speed reducers, and some pretty Force-like maneuvers come in handy during both boss battles and wave-based fights. 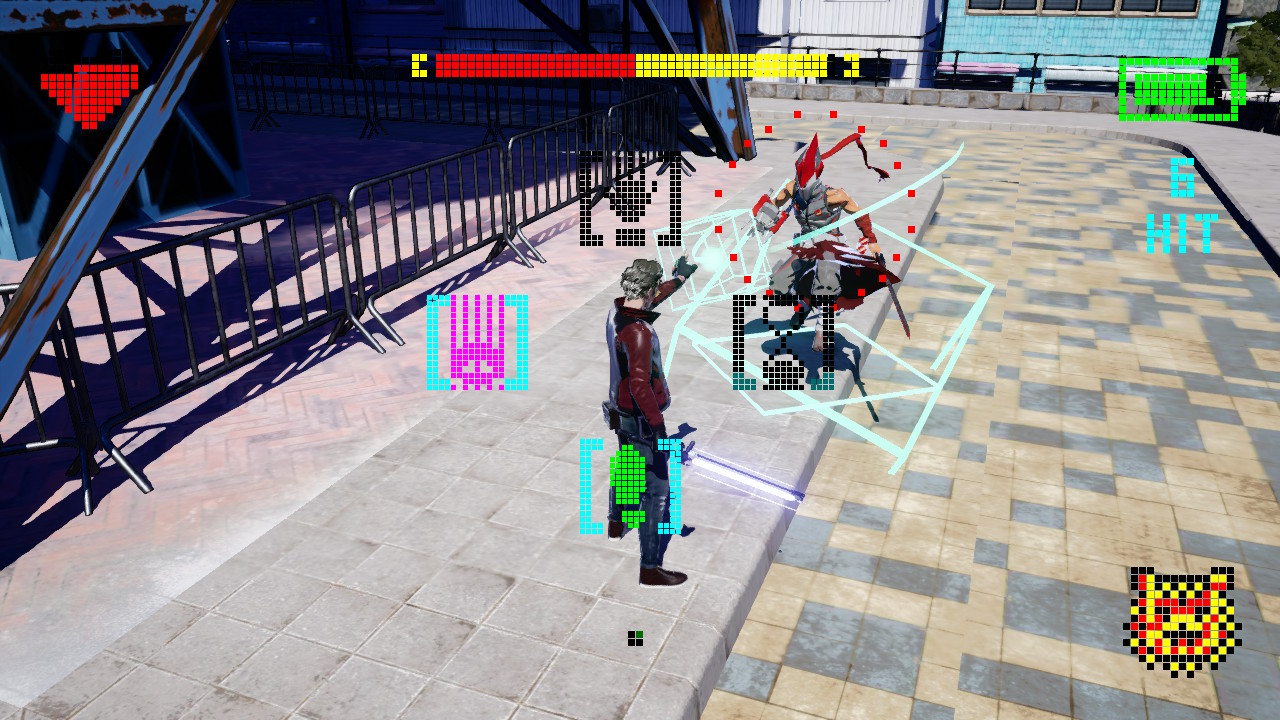 Just like it was in the recent No More Heroes remastered games, the controls here work beautifully! Every motion you make with the right Joy-Con is read with perfection! Performing combos and special attacks also hit their mark with great stride, as the sight of your enemy’s health going down will no doubt get your heart pounding. But it’s when you go full Henshin when the ultimate attack takes form, paying homage to the likes of Gridman and The Guyver.

And it’s those homages that are the bread & butter of Travis Touchdown. There are fun tributes to anime and tokusatsu series, with their references worn proudly on the sleeves of Travis’s leather coat. In-between the chapters — which are split like anime episodes with full-blown anime openings and end credits — are discussions about Bishop and Travis’s love for Takashi Miike, whose segments feel like a well-documented podcast series. No More Heroes is all about embracing nerd culture, and this latest adventure is no different! 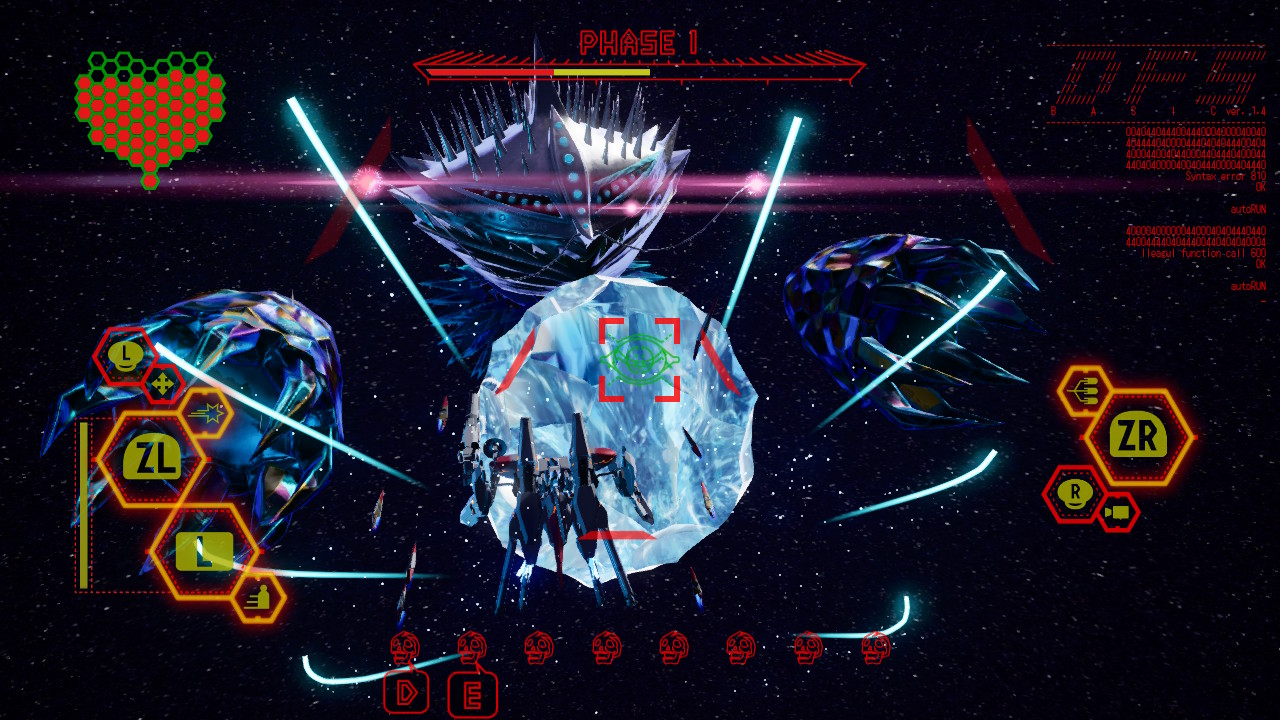 There’s a lot of story content and killer dialogue that keep the story going strongly, all of it leading up to some kick-ass fights and showdowns! The concept of time and space is played heavily, especially when a mysterious fighter arrives calling Travis “Grandpa”. It all leads to an explosive narrative with twists, turns, and plenty of cool factors oozing out. All of it is brought to life with some of the finest video game voice acting around, with Robin Atkin Dowes relishing his role of Travis every step of the way.

However, there are a couple of problems that keep No More Heroes III a complete thrill ride. There are some dry areas of the game that make roaming the open worlds a little too tedious for comfort. While the realms are unique and impressive, they don’t give you much to do aside from a couple of side quests. Aside from the side quests, the non-boss battles can be a little same-y in places, with the fights lacking the excitement of, say, a deadly game of musical chairs. 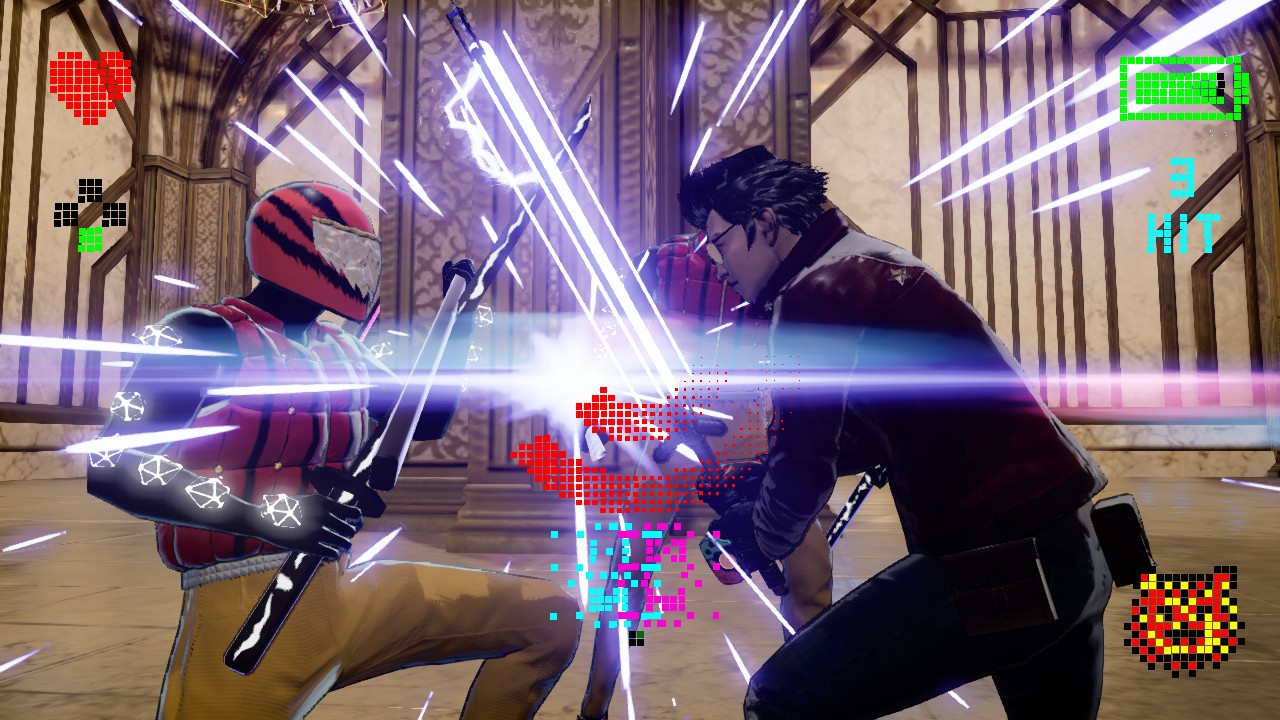 Despite that setback, there’s surprisingly a lot of life that can be found within the game’s replay value. Players can revisit past boss battles and complete various challenges. There are also the options to boost up your skills, beam katana charge time, and learn a couple of more moves that’ll help with fighting off waves of enemies.

No More Heroes III is a reminder of why it’s one of the most under-appreciated series out there. While it does suffer from some tedious gameplay, it makes up for it with its fantastic story and badass attitude. This may be the final goodbye for Travis Touchdown, but No More Heroes III is a damn good way to send this hero assassin out into the sunset.