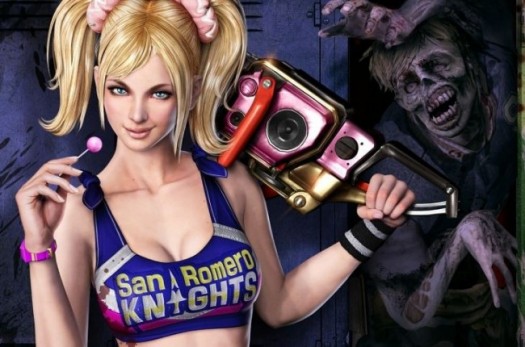 Zombies have become the go-to thing when it comes to threats in the video game world. It took a crazed video game director and a cult filmmaker to add a sort of pizzazz we have never seen in this genre. The duo of Suda51 (No More Heroes, Shadows of the Damned) and James Gunn (Tromeo & Juliet, Slither) decided to have their ideas make sweet love to one another, creating a love child that plays to the strengths of both fanbases. This child would be known as Lollipop Chainsaw, a hilarious zombie gore fest that dared to be different in the best ways possible.

Players take control of Juliet Starling (Tara Strong, fresh off her heels as Harley Quinn in Batman: Arkham City), a cheerleader who is out to celebrate her eighteenth birthday by introducing the family to her boyfriend Nick (Michael Rosenbaum). Things turn for the worse, as she finds herself late for school. Also there are zombies, and Nick finds himself being just a severed head hanging from Juliet's short skirt. Come to find out the Starling family is no stranger to zombie attacks, as the idea of killing more of them excites the barely-legal cheerleader. The one behind the zombie apocalypse is Swan (Sean Gunn), a goth outcast who seeks to break the barrier between the human world and the Rotten World. It's up to Juliet and body-less Nick to save the day, kill all the zombies, and keep the peace in San Romero High. 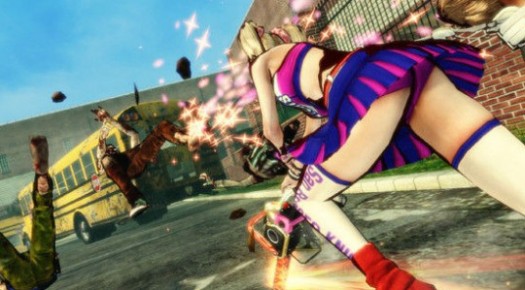 Split up into five levels, a prologue, and a final boss battle Lollipop Chainsaw will have players slash, kick, cheer, and shoot her way through the armies of the undead. Each time you kill a zombie you will earn some coins for purchasing new tricks, maneuvers, upgrades, and health needs that will be needed as the game progresses. Sometimes you'll be able to save your fellow classmates, but if you don't get to them in time they transform into a more powerful zombie than the regular ones. Many of the zombies you'll come across with be of average difficulty, but from time-to-time you'll face off with undead patrons that can fly, throw Molotov cocktails at you, or sometimes have explosives strapped onto them. It would've been great to see more variety in the zombie department, but for now what we are given is fine enough (seeing as many of these regular zombies will come at you in droves).

For maneuvers Juliet will have her trusty chainsaw handy to slice up the zombies, but it becomes far easier to take them down if you mix it up with her high kicks and punches. You'll earn yourself a baseball-shooting gun later on in the game, as well as new combos that will mow down more zombies in one blow. (You'll also get to literally mow down a bunch of zombies in one level, but I won't tell you when.) Nick will also come in handy with his own powerful maneuvers, and can also be used to solve puzzles via QTE maneuvers that are as challenging as they are fun to watch. 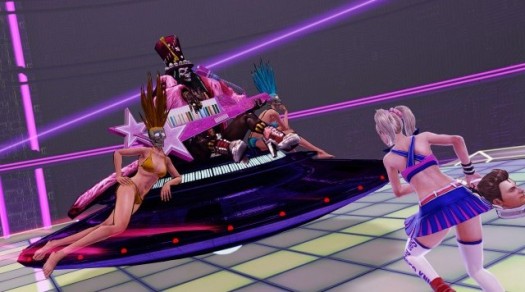 Lollipop Chainsaw finds its more creative approach in some of the mini-game aspects of its play-through. One level will have you slicing off heads while they're being thrown through a basketball hoop in order to score points. Another is more akin to classic arcade games (a trademark of Suda51's), with Juliet and the zombies looking 8-bitish and running through levels that look straight out of Namco's back catalogue. It's during the boss battles when the true fun is being had, where the sub-villains throw curse words, funkadelic space beams, and death metal slams upon Juliet's head.

The overall look of Lollipop Chainsaw looks like a more HD version of No More Heroes, what with its bright colors and comic-bookish attention to details. I did notice in a couple areas where there was some rendering issues, especially when there were more than twenty zombies on the screen at a time. Props must be given during the final boss battle (which I cannot be spoiled here), as the look of the King of all zombies stood out as being the most wonderfully gruesome and hilarious. 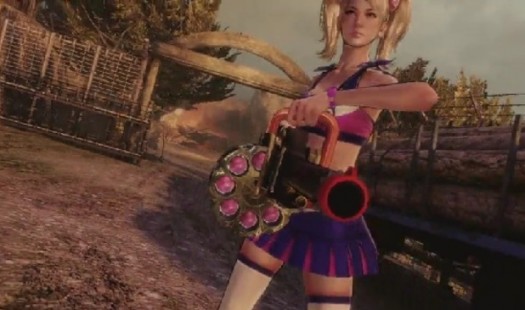 Controlling the game felt like a breeze for the most part. However there was some noticeable hiccups in the area where the sensitivity of the controls kept me from using my biggest power-ups for the end. It was difficult not clicking the left control stick, which by doing so ignite's Nick's power-ups, but fortunately you can cancel out of it by pressing the B-button. The same cannot be said for Juliet's "Mickey" attack, which cannot be stopped once it's been started, which irked me when it came to needing them for the more tougher battles during the the levels.

James Gunn's writing fit perfectly with Suda51's gaming style, making this collaboration a match made in Heaven and drenched with demonic blood. The dialogue between Juliet and Nick might just be the funniest you'll hear in gaming all year, with the puns, jokes, and references hitting a grand slam one after another. (Granted it doesn't beat the one-liners heard in Shadows of the Damned, but the dick jokes here are still quite funny.) Characters are developed very well, as we come love both the heroes and villains in Lollipop Chainsaw, which makes it a shame that players won't be able to go hands-on with the other members of the Starling family. 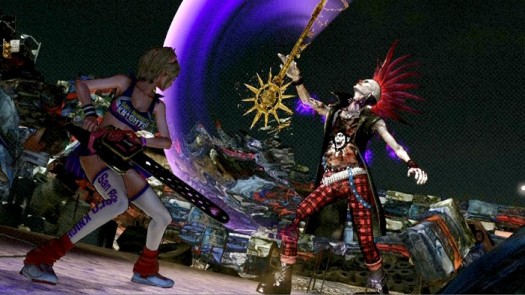 Lollipop Chainsaw might also have the best soundtrack of the year. Akira Yamaoka's rocking score fits the mood in each level, what with its epic guitar riffs and occasional techno beats. Mindless Self Indulgence's Jimmy Urine (who also plays Zed) did all kinds of right for the boss battle music, with each one of these songs perfectly matching with the personality of the bosses. Kudos also has to go to the guy who was in charge of getting the licensed music, which has some killer tracks from Joan Jett, Dragonforce, Atari Teenage Riot, and Skrillex. Usage of Toni Basil's "Mickey" for Juliet's superpowered one-shot kills will go down as the smartest usage of licensed music in a game since Tony Hawk Pro Skater's glory days.

You'll be able to complete Lollipop Chainsaw your first time around in roughly six hours, and while that might not be that long for a $60 title there is plenty to go back for. With all the unlockable combos, powers, and costumes to go through you'll be finding yourself replaying this game over and over again until you finally beat "Dad's score." There's also the good and bad endings, which if you get the latter you'll be pushing yourself to go through and get better times and scores to earn the more happier resolution.

When I played Lollipop Chainsaw at PAX East I was a tad worried that WB Games was on the verge of releasing a broken game. That was not the case, fortunately, as Juliet Starling's first adventure is both a joy to watch and a marvel to play. Sure it has its flaws, but they've been sparkled over with some of the most unique aspects found in the zombie game category. Lollipop Chainsaw had one goal: make a fun and memorable gaming experience, and they've succeeded with rainbow colors. Let's just hope this won't be the last time we see the Starling family.