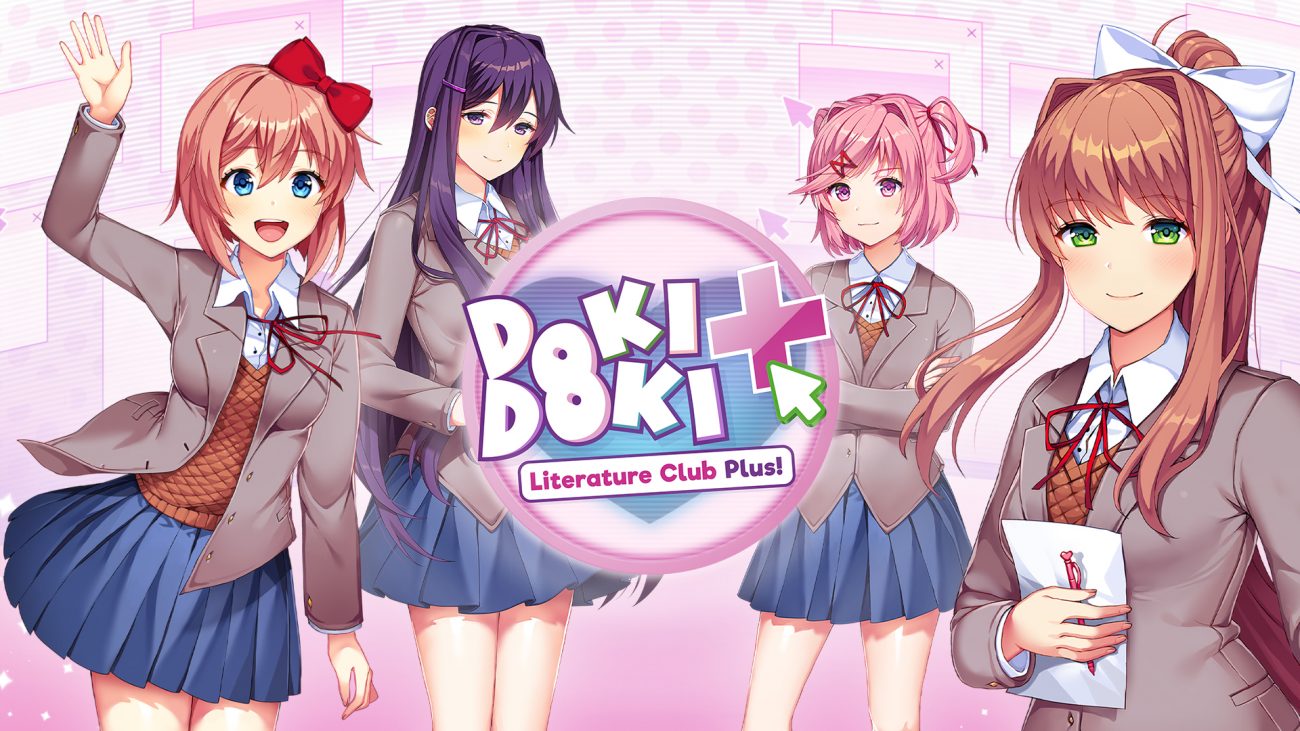 WARNING: The following video game contains references to suicide. If you or someone you know has suicidal thoughts or feelings, you are not alone, and there is free, 24/7 help. National Suicide Prevention Lifeline offers specific resources and confidential support for those in crisis or emotional distress. You can call 1-800-273-8255 or go to SuicidePreventionLifeline.org at any time for free, 24/7 help when you or anyone you know needs help.

In 2017, a mysterious visual novel appeared on the itch.io website, followed by a Steam release. On the surface, it seemed like your usual VN fare, as you try to win the heart of one of the girls in your vicinity. But then, out of nowhere, it takes a sharp left turn, transforming a once-bubbly game into a truly fucked up affair. Within mere days, these words came out of the lips of many in the gaming industry: “You need to play Doki Doki Literature Club!” 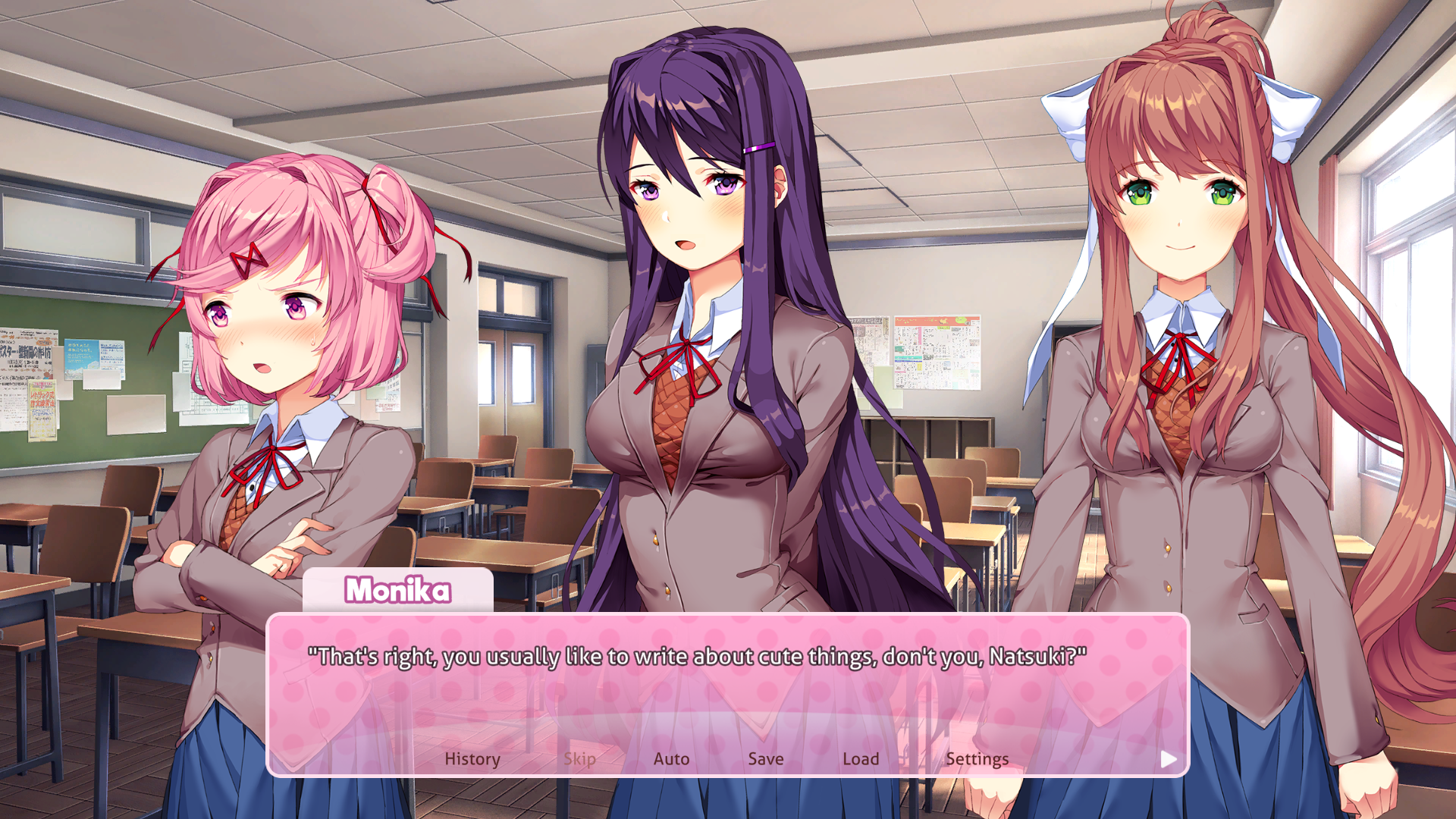 The game was originally made for free by Dan Salvato, who made his name with the Project M Super Smash Bros. mod. His love/hate feelings for anime and the like drew him to create a story that started off sweet before becoming an uncomfortable affair. It became a hit in the community, inspiring fan works, cosplay, and — yes — even doujinshi. Four years later, and its popularity still strong, Team Salvato and Serenity Forge have teamed up to bring a revamped version of this overnight sensation, in the form of Doki Doki Literature Club Plus.

Like in the original game, the Plus version has you take control of a faceless protagonist. Your best friend Sayori attempts to convince you to join her Literature, where you meet Monika, Yuri, and Natsuki. After having your arm twisted, you reluctantly join, and are given your first task: to write a poem. Depending on which words you use, you’ll find yourself beginning a relationship with one of the girls. But when things seem hearty and innocent, the rug gets pulled right out from under you! 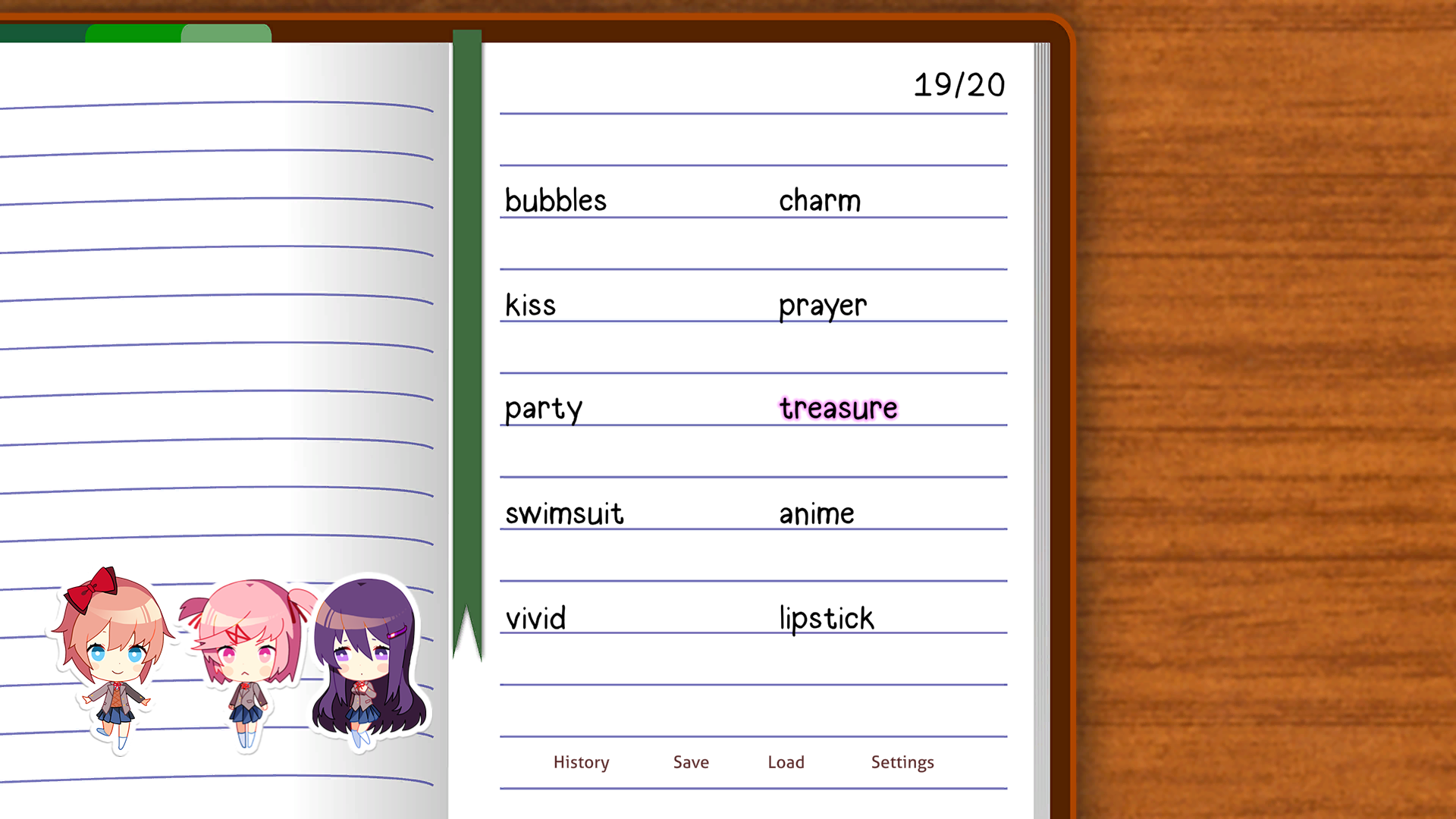 There have been many visual novels that have played with horror elements in the past, ranging from the Higurashi series to Cartagra. The difference between these and Doki Doki Literature Club is that those who walk in blindly to the game won’t even expect the terror that will occur. One look at its characters and promotional art, and you’ll think everything will be cheery and bright. But as the game goes on, the characters show signs that they’re not the most normal people around.

Much akin to Fucked Up’s 2011 album David Comes to Life, it becomes clear that someone or something else is pulling the strings of this narrative. You’re forced to restart, with certain characters acting weirder and others, well, not even appearing for some reason. Glitches, psychotic episodes, and even blood & vomit are thrown in the face of gamers. It then reaches a point where the true mastermind shows their hand, leaving players to make a choice. 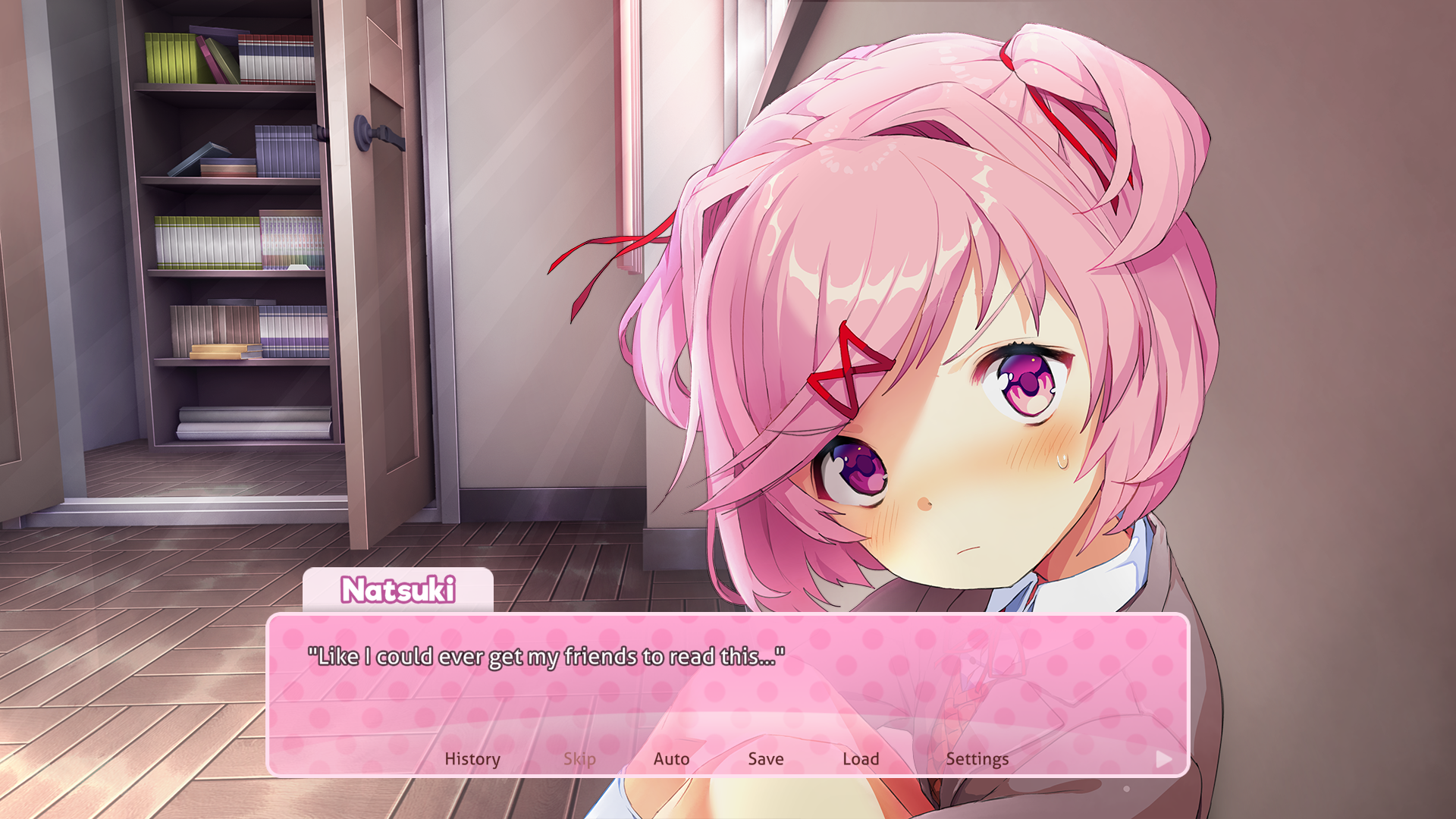 Behind-the-scenes, players find out some of the happenings going on through emails and text documents found in the game’s PC. At first, things seem okay in the development realm. However, at certain points in Doki Doki Literature Club, new messages will appear, making it clear that there are some reasons to panic over what’s happening. This fourth wall-breaking mechanic not only showcases the madness that’s occurring within the game, but also outside of it.

On one hand, players are to treat Doki Doki Literature Club Plus as satire, with the darker elements and themes meant to be seen as humorous. With that being said, those who struggle with similar conditions to that of the characters may find it hard to play. Fortunately, these elements are revealed right at the start of the game, as Team Salvato makes it clear that there will be disturbing elements featured in the story. Still, even with this warning, what players will see will still be very disturbing. 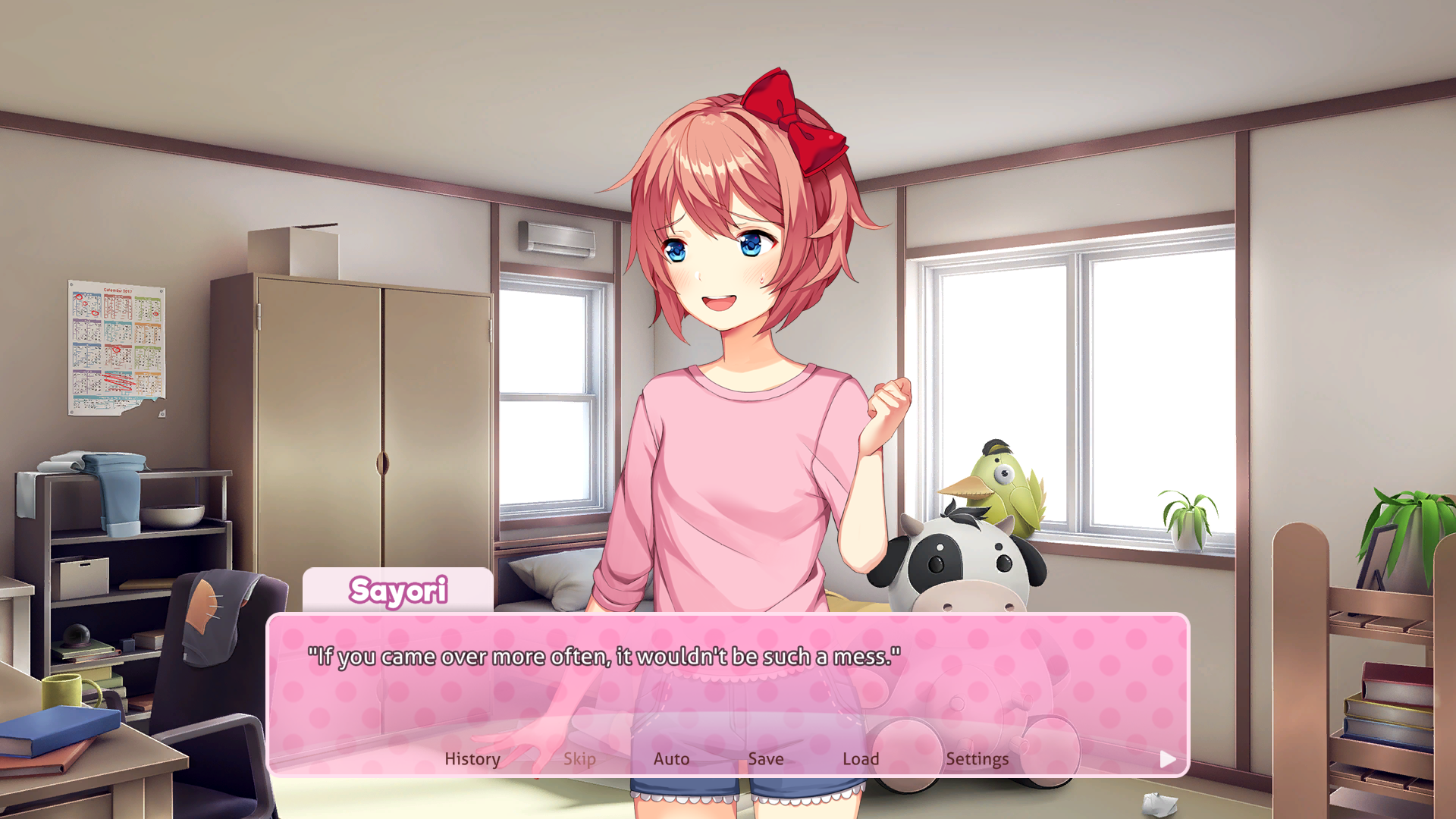 However, it’s in the execution of its story that makes Doki Doki Literature Club a feat of digital storytelling. Team Salvato managed to capture the true spirit of a Japanese visual novel, and then completely turn it on its head! There are scenes that players will be unable to unsee, with some character development that may hit close to home for certain people. And yet, it’s how the narrative is showcased that makes it a true one-of-a-kind experience.

Players can run through Doki Doki Literature Club Plus in about four hours, with an addition 5-6 hours to unlock all the other routes and alternate endings. New to this version are some side stories that goes deeper in the character’ back stories, an interesting affair that — sadly — lacks any true interaction to them. There’s also nothing new added to the main story, which may turn off certain repeat players to splurge on the paid version.

It’s been four years since Doki Doki Literature Club surprised gamers across the globe, and after all this time, it's still a superb narrative to watch unfold. While this new version doesn’t have a lot of new bells and whistles, it still offers a visual novel experience that you won’t find elsewhere. If you have yet to dive into Team Salvato’s little story that could, then joining the Doki Doki Literature Club is an absolute must!