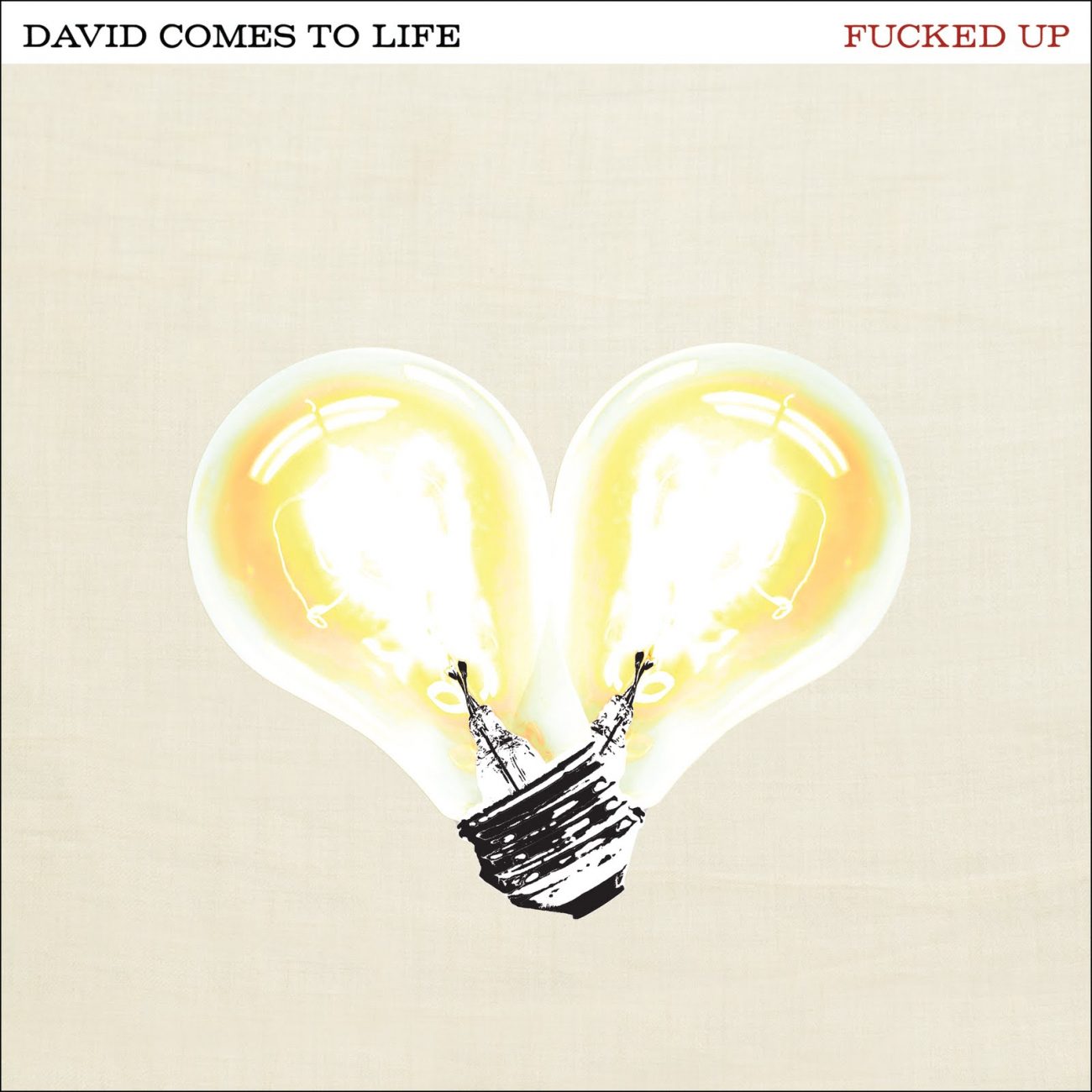 Ten years ago today, Canadian hardcore punk rock band Fucked Up unleashed their third album David Comes To Life. Not only would this album be considered our pick for best album of 2011, but would take the top spot of the greatest album to be released in No Borders No Race's first ten years of existence. Since that time, Fucked Up have played with narrative punk a few times over, including the brilliant 2018 release Dose Your Dreams (a sequel of sorts to David Comes To Life) and this year's triumphant Year of the Horse.

To celebrate this ten-year anniversary, we will be presenting for the first time a written review of David Comes To Life. Originally penned back in May 2011, this article was to be featured in an issue of the ElectricSistaHood magazine. Alas, our days in print were a little short-lived, and the article stayed dormant for a very long time. Well, until now, that is! So without further ado, let us visit the then-26 year old King Baby Duck, and hear his thoughts on Fucked Up's David Comes To Life! (And yes, this KBD gets a bit of the narrative wrong, so bear with him!)

Fucked Up have done quite a lot in their first ten years. They’ve released more vinyl singles than you can count, destroyed the Canadian set of MTV Live (twice!), played a 12-hour show in New York with Moby, Dinosaur Jr. and Ezra Koenig and won the prestigious Polaris Prize for their critically-acclaimed album The Chemistry of Common Life. Now at the start of their second decade, the gang from Toronto are embarking on their biggest undertaking yet: an 80-minute rock opera entitled David Comes To Life.

Based on a recurring character originally from the same-titled song off their Hidden World record, David Comes To Life tells the story of David Eliade, a worker in a lightbulb factory who falls for an anarchistic woman by the name of Veronica. After she dies in a horrible but unnamed accident, the English town of Byrdesdale Spa eyes David as the man who should be blamed.  But a problem arises when everyone’s point-of-view differentiates all over the place. (Even the narrator Octavio St. Laurent’s version of the truth isn’t to be trusted.) The battle becomes more internal, and as the protagonist and storyteller go head-to-head, David has to undergo his biggest task yet: moving on and healing the wounds of the past.

If the story sounds complicated, you’re correct. David Comes To Life is more like The Who’s Quadrophenia than either Tommy or Green Day’s American Idiot. The story is all over the place, but at the same time you can easily get the gist of what’s going on in the emotionally tortured life of Mr. Eliade; in fact, its philosophical aspects outweighs the majority of any of these albums. The tale may sound solid, but do the songs hold a candle to Fucked Up’s past masterpieces?

It is quite refreshing to hear someone screaming about being in love as Pink Eyes does in “Queen of Hearts,” instead of the usual guy singing about wanting to shout his love to the heavens above, as it removes that annoying middle man and beats the living bejesus out of it. As the love between David and Veronica mirrors the rest of the world in “Under My Nose,” he realizes that “It’s all been worth it,” even when he’s waiting for catastrophe to unfold in “The Other Shoe,” probably the best track on the entire album. The imagery of butterflies leaving one’s stomach and the tragedy that is happening in front of David’s eyes is awe-inspiring, with the guitar work of 10,000 Marbles, Gulag and Young Governor creating an all-around fist-pumping emotion that will take over your mind and heart.

“Remember My Name” has David lamenting his lost love, wanting to cut himself out of the outside world and live his life as a hermit. (It’s also probably the only hardcore song in existence with a Beach Boys-like chorus in the background.) Once Vivian, another woman in David’s life, adds another perspective to the tragedy in “A Slanted Tone,” it comes full circle as Octavio realizes that it’s all his fault in “Serves Me Right.” It’s “Life In Paper,” where David figures that no one can be trusted in telling the truth and curses the heavens, where the album starts mirroring the perceptions of the average person during life’s roughest roads.

Hearing Vivian’s point-of-view in “I Was There” and bearing witness to the David/Octavio battle in “Ship Of Fools” leads listeners to notice the true anger that fills many of the characters’ hearts, but for different personal reasons. David wants the pain of Veronica’s death to go away; Octavio wants the burden of being the storyteller thrown off his shoulders; and Vivian just wants David to notice her as someone that wants to be more than just friends. Fortunately, the ending of the album is traditional deus ex machina, where Veronica reappears to David in “One More Night,” saying that her spirit can finally rest and David should move on, with the memories of their time together close to his heart. The final track “Lights Go Up” reverts the town of Byrdesdale Spa into Shakespeare’s metaphor of the world being a stage, with David telling both the audience and Veronica that he’ll see them again “when our story gets retold.”

The album is filled with growly vocals, epic guitar solos and most pit-inducing drumming. It also happens to be the most catchiest thing Fucked Up has ever done, and while their first two LPs had their sing-along moments they didn’t reach the limits David Comes To Life has. As a whole it runs circles around its predecessors, even if some of the songs might not work well separately as the ones in The Chemistry of Common Life had. (“A Little Death” comes to mind.) Take note, future rock stars: this is how to properly do a concept album.

Albums like David Comes To Life only come sporadically, and it takes gumption to create one with a beautifully-told story, hard-rocking melodies, and a lot of heart & soul wrapped into it. It’s odd to hear a hardcore punk band perform songs about love and remorse, but if there’s one group that can make it succeed it’s Fucked Up. Believe the hype: David Comes To Life is one of the best albums of 2011, knocking Green Day out of its reign as the leaders of the punk opera genre. And now to play the waiting game for the inevitable Broadway adaptation...

For a little more fun, check out our insanely-detailed comparison of David Comes To Life to the anime Puella Magi Madoka Magica. And yes, it's as crazy as you think it might be!