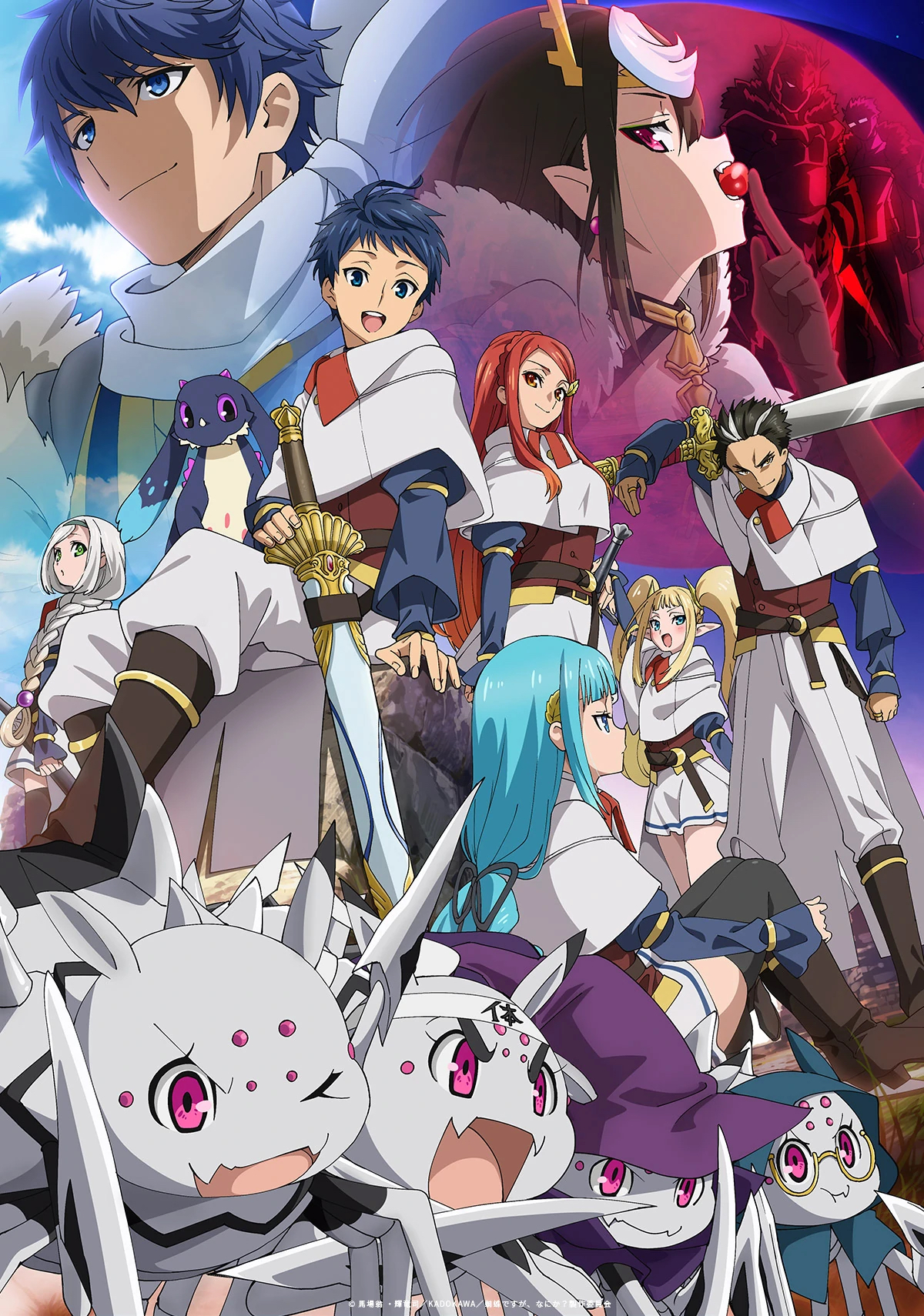 The crazier the scenario, the better the isekai. I say this because there have been many series in this genre, and roughly 90% of them have the same premise, outline, and even character development. So whenever the writers toss a monkey wrench into the formula, that’s when gold will be struck in the isekai realm. So I’m a Spider, So What? is one of those series that doesn’t just go full throttle with the crazy; it relishes it at every step of the way.

Based on the light novel series by Okina Baba, So I’m a Spider, So What? begins when an entire high school is blown up for...reasons currently unknown. Reborn into another world, all of the students are gifted with magical powers and abilities, as they’re given the chance to be part of royalty and nobility. Well, that is, except for one female student (Aoi Yuki), who had the misfortune of being turned into a spider. 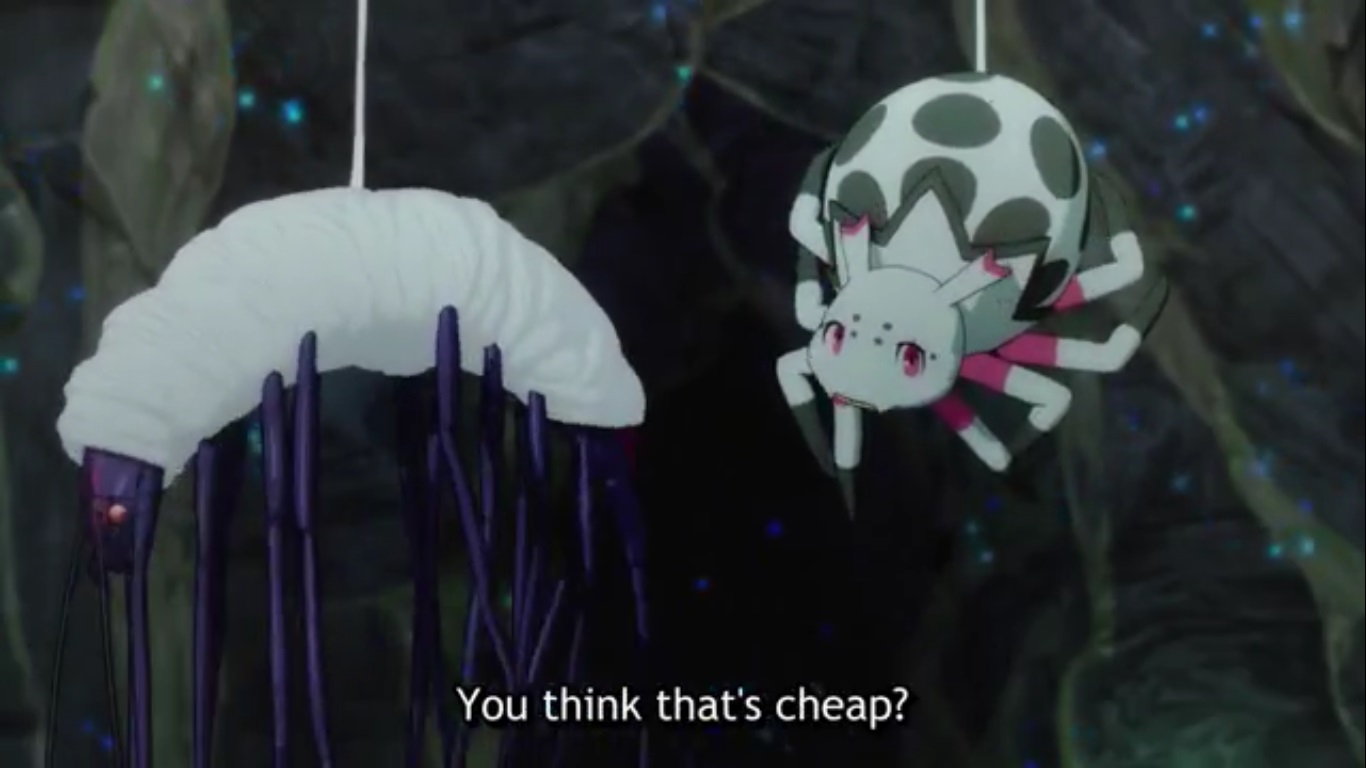 The spider (whom the Japanese fandom have dubbed “Kumoko”) at first takes her predicament in stride, as she believes that she can simply live a quiet life as an arachnid. However, she quickly discovers that she’s living amongst the baddest and meanest monsters in the land, as her webby home is burnt to ash in mere moments. That’s when Kumoko realizes that within her spider body is the power to become the greatest and most powerful entity to roam the planet.

Most of So I’m a Spider, So What? follows Kumoko as she roams her surroundings, leveling up her powers and learning new abilities along the way. The more powerful she becomes, the more she becomes capable of. From starting off with small lizards and snakes to battling a gang of monkeys and a massive dragon, Kumoko works her giant butt off to better her chances at surviving. It reaches a point where her brain can be split into different personalities, with each one focusing on different tactics such as magic and stealth. 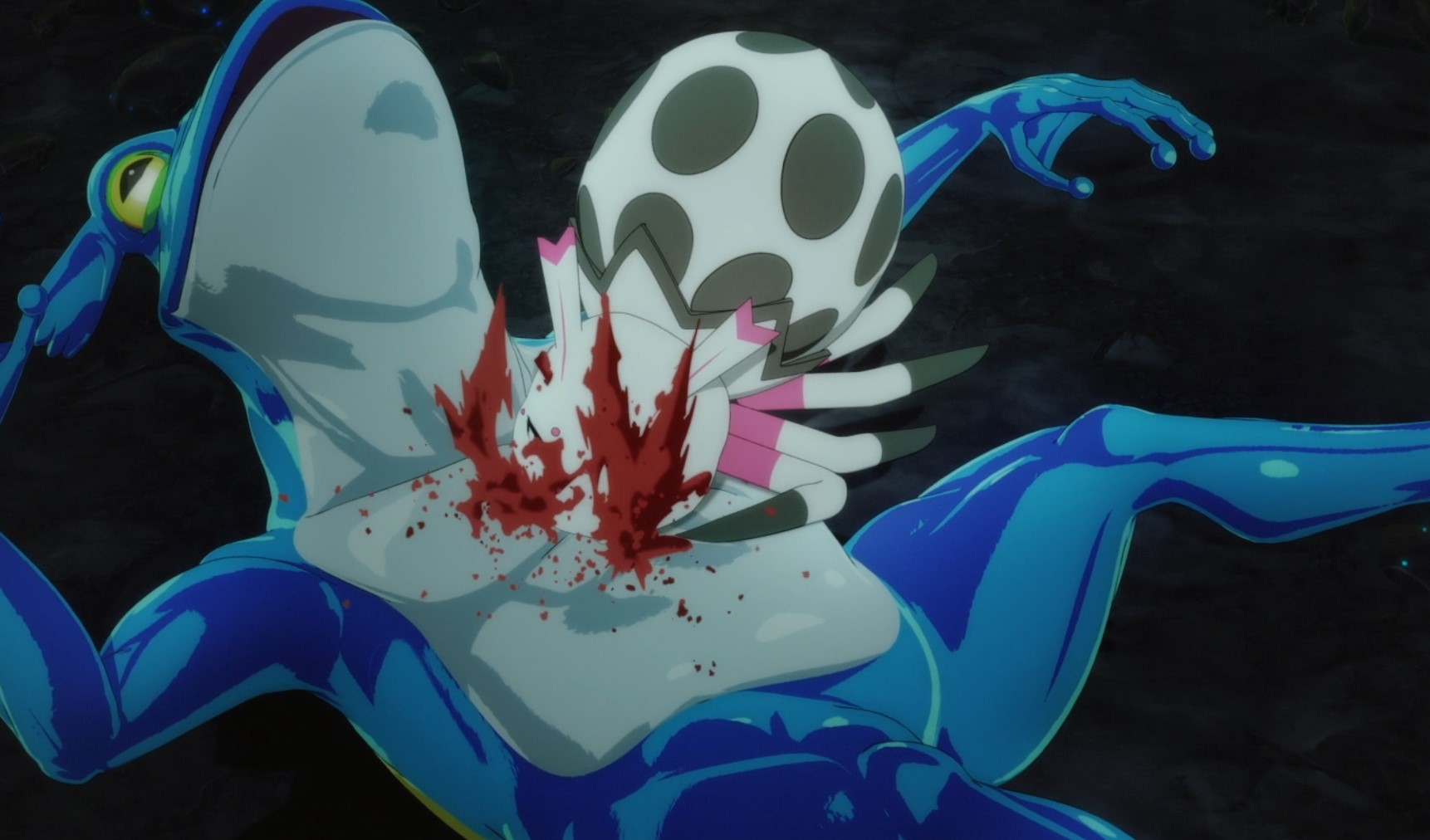 Kumoko has a lot in common with another Aoi Yuki-fronted isekai, as her need to survive is shared amongst the likes of the titular character of Saga of Tanya the Evil. Both want to become strong, yet at the same time they want to experience the easy life. However, the higher they climb towards their goal, the more likely they’ll be forced to deal with an avalanche or two that’ll stop them in their tracks. The difference is, where we all want to see how high Tanya climbs before she gets too close to the sun, the series sets Kumoko up as the ultimate hero to root for (even if she, well, I don’t want to spoil it for those unfamiliar with the source material).

The draw of this anime is the constant monologuing of Kumoko, as she comments on every situation she faces. These pieces of dialogue make her not just a laugh-out-loud riot to watch, but also very Everyman-ish when it comes to her current situation. It’s like she’s taken every trait of the KonoSuba gang, and molded it into the most adorable eight-legged creature imaginable. Kumoko has Kazuma’s wit, Megumin’s cunningness, Darkness’s tenacity, and — on occasion — Aqua’s flag-triggering. 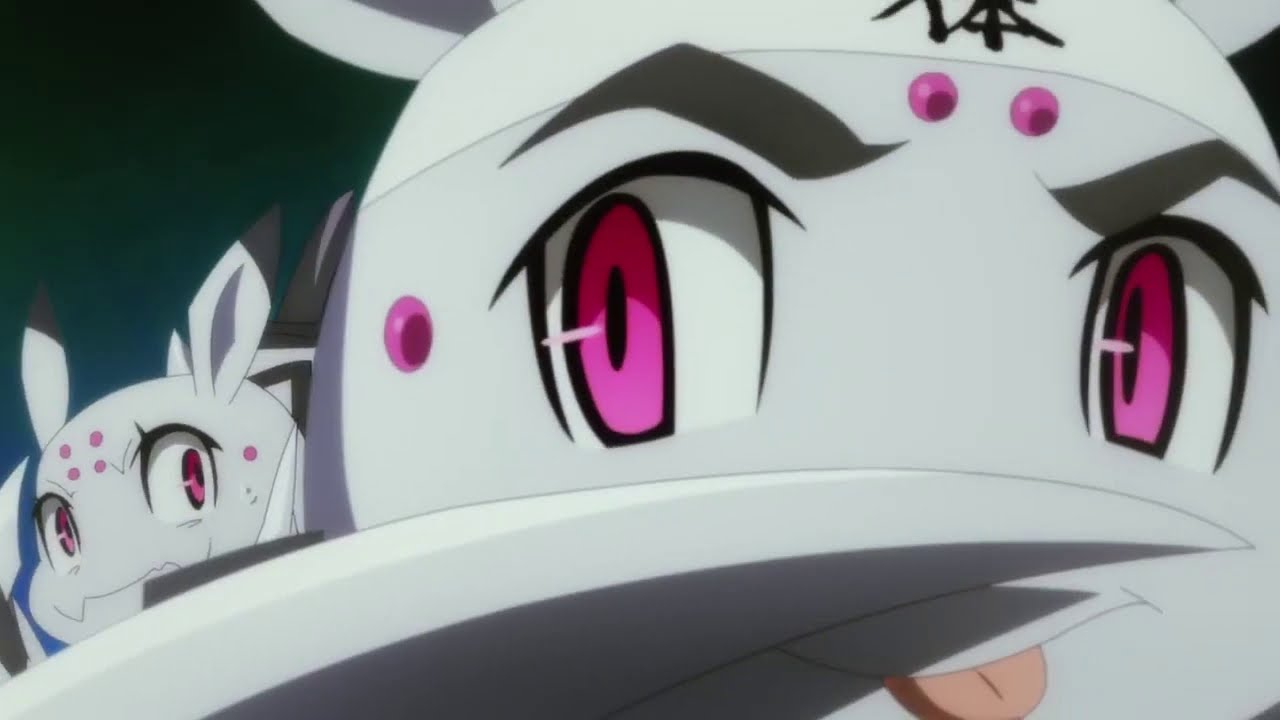 It’s how voice actress Aoi Yuki portrays Kumoko that makes every moment with her a joy to watch. Because we’re with her most of the time, it’s her responsibility to carry So I’m a Spider, So What? towards whatever fate deals her. And every time Yuki quips, jokes, cheers, and panics, one cannot help but love everything that this series throws at its viewers. Although she already has quite the impressive resume (not to mention the greatest vocal range I’ve ever heard from a single voice actress), Yuki’s take on Kumoko will certainly cement her alongside Megumi Hayashibara, Masako Nozawa, and Maaya Sakamoto as a true seiyuu legend!

There are parts of So I’m a Spider, So What? that focus on the other students affected by the explosion. I wouldn’t exactly call these moments weak, but compared alongside Kumoko’s scenes, they’re quickly forgettable. In fact, I couldn’t tell you the names of any of these characters, as they’re basically cookie cutter versions of past isekai heroes and heroines. Perhaps that’s the point, seeing as they’re living the lives of many other isekai protagonists, and Kumoko’s situation is far from the norm. 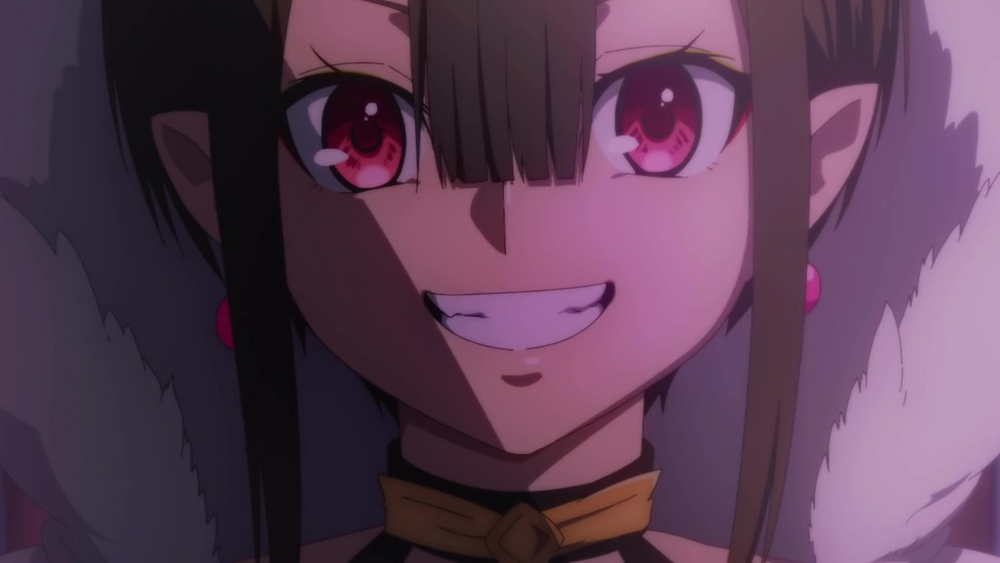 What does stand out is the main villainess of the anime: Ariel (Sumire Uesaka). As she has control of all of the world’s spider monsters, her interest in what Kumoko is doing is fairly understandable. Although her actions have been more in the shadows at this point in time, her capabilities are very apparent. Ariel’s abilities are the equivalent of “finding out” after one “f**ks around” with the ways of this fantasy world, and this reviewer is looking forward to seeing the kind of chaos she will bring.

It’s interesting to see Millepensee animating So I’m a Spider, So What?, seeing as they and director Shin Itagaki were responsible for the infamous Berserk adaptation five years ago. They’ve learned quite a lot since then, especially when it comes to combining traditional and CGI animation together. While there are some hiccups with character movements and appearances, their design of Kumoko is absolutely divine, as it brims with cuteness and lively personality in every pixel. In action, the spider delivers some impressive movements while she attacks the biggest of behemoths imaginable, all of which is pretty impressive! 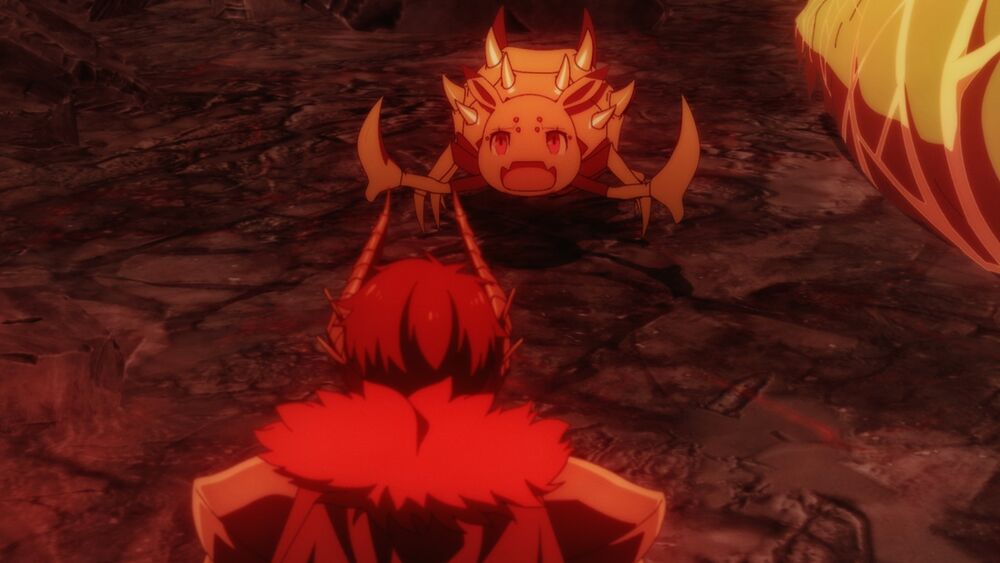 Composer Shuji Katayama knows how to make a good isekai soundtrack, as evident by his work in Overlord and Saga of Tanya the Evil. It adds a lot of oomph to the big action scenes, as well as some extra chuckles when it’s time for Kumoko to make us laugh. Opening theme “keep weaving your spider way” is a banger of a song by Riko Azuna, giving way to some excellent vocal ranges and metal-infused guitars. However, Aoi Yuki once again steals the show with her end theme “Ganbare! Kumoko-san no Theme”, which pokes fun of everything from cutesy pop to powerful enka in a delightful little ditty.

So I’m a Spider, So What? is a very impressive isekai series, one that easily stands out from the rest of the pack. It’s funny as hell, and delivers a walloping of action for all to enjoy. When an isekai is allowed to be unique, that’s when it can shine like the brightest gem stone around. In this Winter 2020 season, it’s hard to not notice the bright beacon that Kumoko and So I’m a Spider, So What? shines upon its viewers heads.

Now with that being said, how’s about adapting that one isekai with the dude that gets turned into a vending machine?!

So I’m a Spider, So What? can be viewed on Crunchyroll and VRV, and has been licensed by Crunchyroll. Episodes 1-9 were observed for this review. Promotional consideration provided by Ellation.