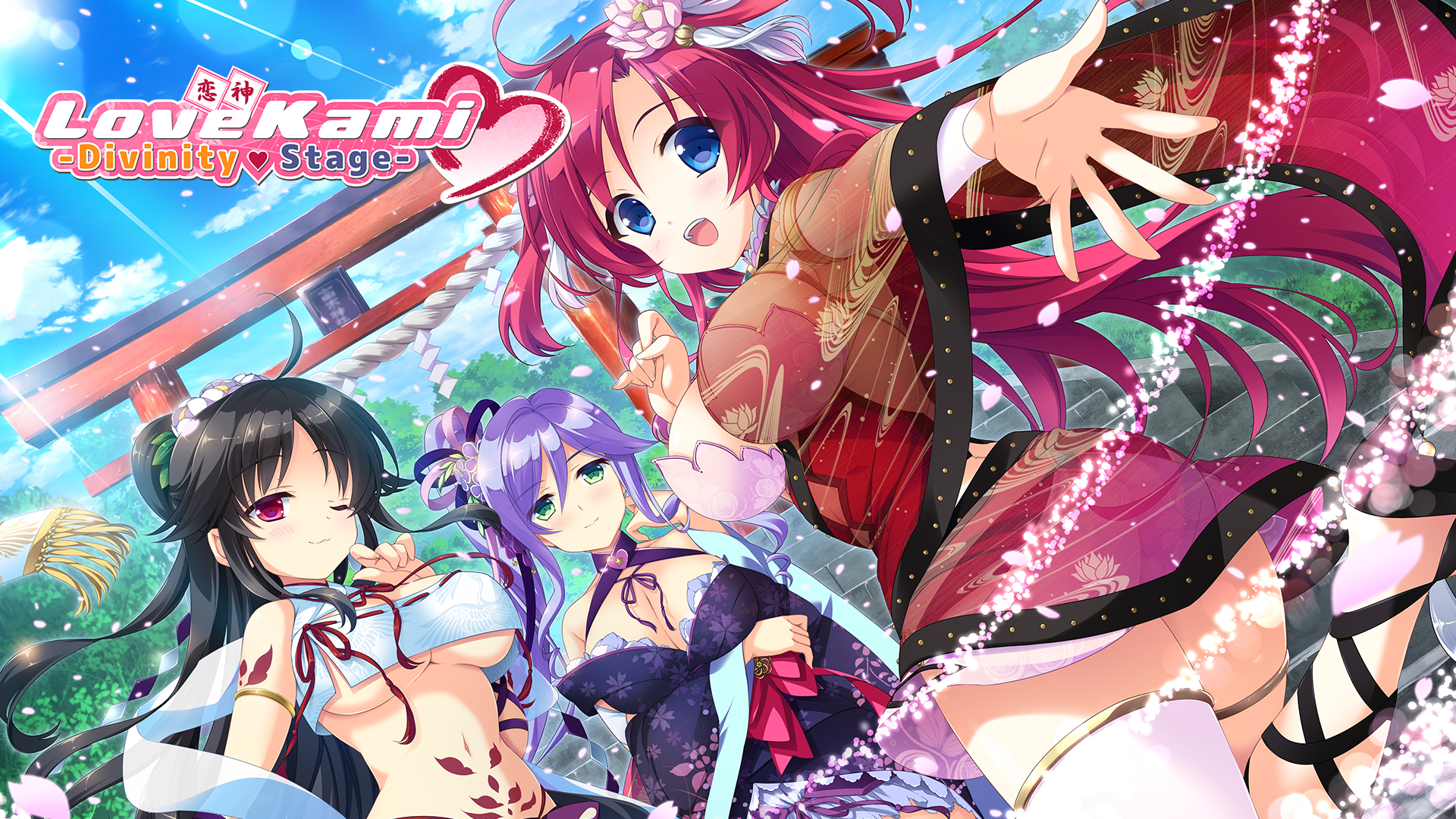 Picture this: the sight of goddesses ascending to Earth. Beautiful spirits that should bring new tidings and world events to the human race. But instead of becoming mouthpieces for the powers that be, they instead become pop idols. Yeah, it’s one of those things that only the Japanese visual novel can conjure up, which makes the overall concept of PULLTOP and MoeNovel’s LoveKami -Divinity Stage- somewhat laughable. But man, does it have its charming parts!

The story of LoveKami -Divinity Stage- places its focus on three goddesses, with one currently in the idol group L☆SEVEN and two fighting for a new opened spot on the crew. Shuri Kisshouten aims to follow in her older sister’s shoes and join the roster, whereas Kagura Amauzu attempts to rise from her grassroots upbringings. Meanwhile, current L☆SEVEN member Sara Benzaiten cheers for the two possible candidates on the sidelines, while at the time time carrying a secret burden. As the game takes a romantic route, “players” will be given the chance to romance one of the three goddesses in the story.

I say “players” in quotation marks because there is very little to play in the game. Like most visual novels, there is a lot more reading and listening than there is actual doing stuff in LoveKami. There is only one instance where you actually interact with the story, which is where the tale is breached off to its three endings. For people that have played a lot of visual novels in the past, they may see this as a disappointment.

However, like Tokyo School Life, this particular visual novel is certainly up the alley for those who are still new to the genre. It’s not a long experience, so it’s good for those who aren’t used to the ones that can last well over a hundred hours! The voice acting is on-par with what you’d find in a good anime drama, and its visuals are certainly appealing to the eyes. There’s also one factor that makes it stand out from some other visual novels: its educational aspect. 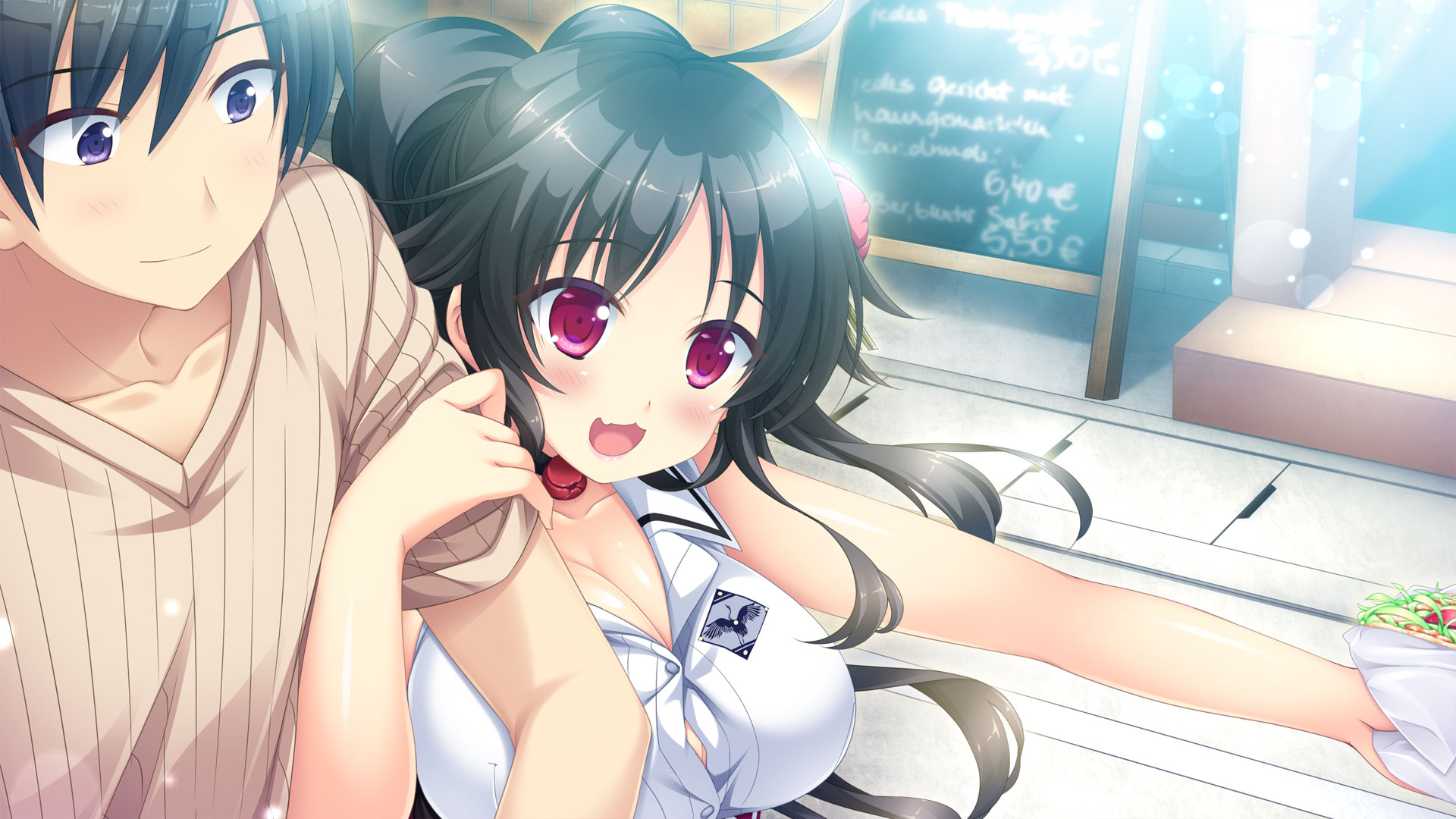 As the characters are based on real deities, players will learn about what each person, group, and — on occasion — event symbolizes in Buddhism and Shintoism. Despite some of its naughtier elements, players will be pleasantly surprised by how much work was placed into the developments of these characters and their meanings. Since a lot of this stuff will go over the heads of most Westerners, there are plenty of CliffNotes placed in certain parts that will aid in helping them understand their meanings and the like. All of it is done in a way that doesn’t take you out of the story, giving the more educational elements a moment to feed into players’ minds without interrupting the flow of the tale.

With that being said, despite the care taken into developing the characters, I cannot help but feel like relationships get built up too quickly to give the main character enough time to truly get to know Shuri and Kagura. They meet, form a duo (with the MC being their guide of sorts), and somehow this builds up to a relationship between one of those two girls. There are some endearing moments, but they tend to feel forced rather than natural.

Perhaps that’s why I preferred the Sara route out of the three choices. As the character seems to have known the MC for a far longer time, their relationship comes off as a bit more genuine. Her side of LoveKami is even a bit more well-written, giving her more conflict and something deep to make her a bit more three-dimensional. Shuri has a fairly decent family-based reason for her wanting to be an idol, and Kagura’s is the old tale of a small-timer wanting to shine in the bright spotlight. Unlike those two, though, Sara’s has some sort of originality placed in her story path.

LoveKami -Divinity Stage- isn’t quite for seasoned visual novel players, as it can be lacking in parts. However, for newcomers, it’s an easy-to-follow story that could act as a gateway to the genre. There may be some better picks, but LoveKami has enough personality to make it a worthwhile experience.

Promotional consideration provided by Helene Fessard of Playism. Reviewed on the Nintendo Switch.