I SUCK AT THIS GAME | "Ghostrunner" 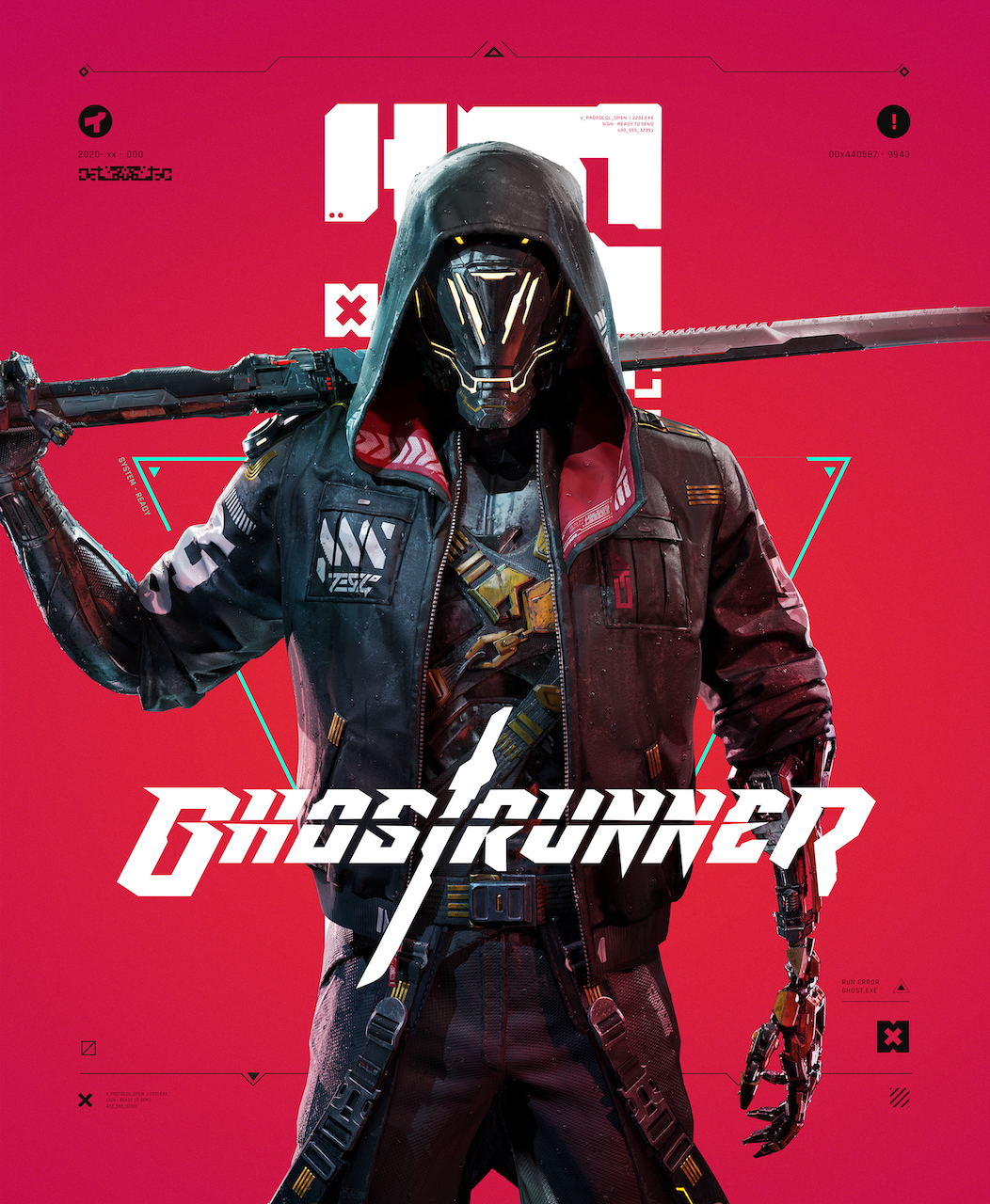 I SUCK AT THIS GAME | "Ghostrunner"

Here’s my conundrum: I’ve spent six hours playing a video game, which is a fair amount of time to put into a single title. The problem: I’m still stuck on the first level! What’s a critic to do if they can’t solider through a video game? Whelp, that’s where one needs to be creative and go outside the box with their critiquing!

Welcome to “I Suck At This Game!”, a new series where I cover video games that I am just flat out terrible at. The games aren’t bad, nor do they deserve low grades because they’re difficult. Nay, for it is all my fault my experience was the way it was, as I became way too frustrated to continue beating myself over the head. For the very first game to be tackled in this segment, we are going to look at 505 Games and All in! Games’s Ghostrunner, developed by One More Level, Slipgate Ironworks, and 3D Realms. 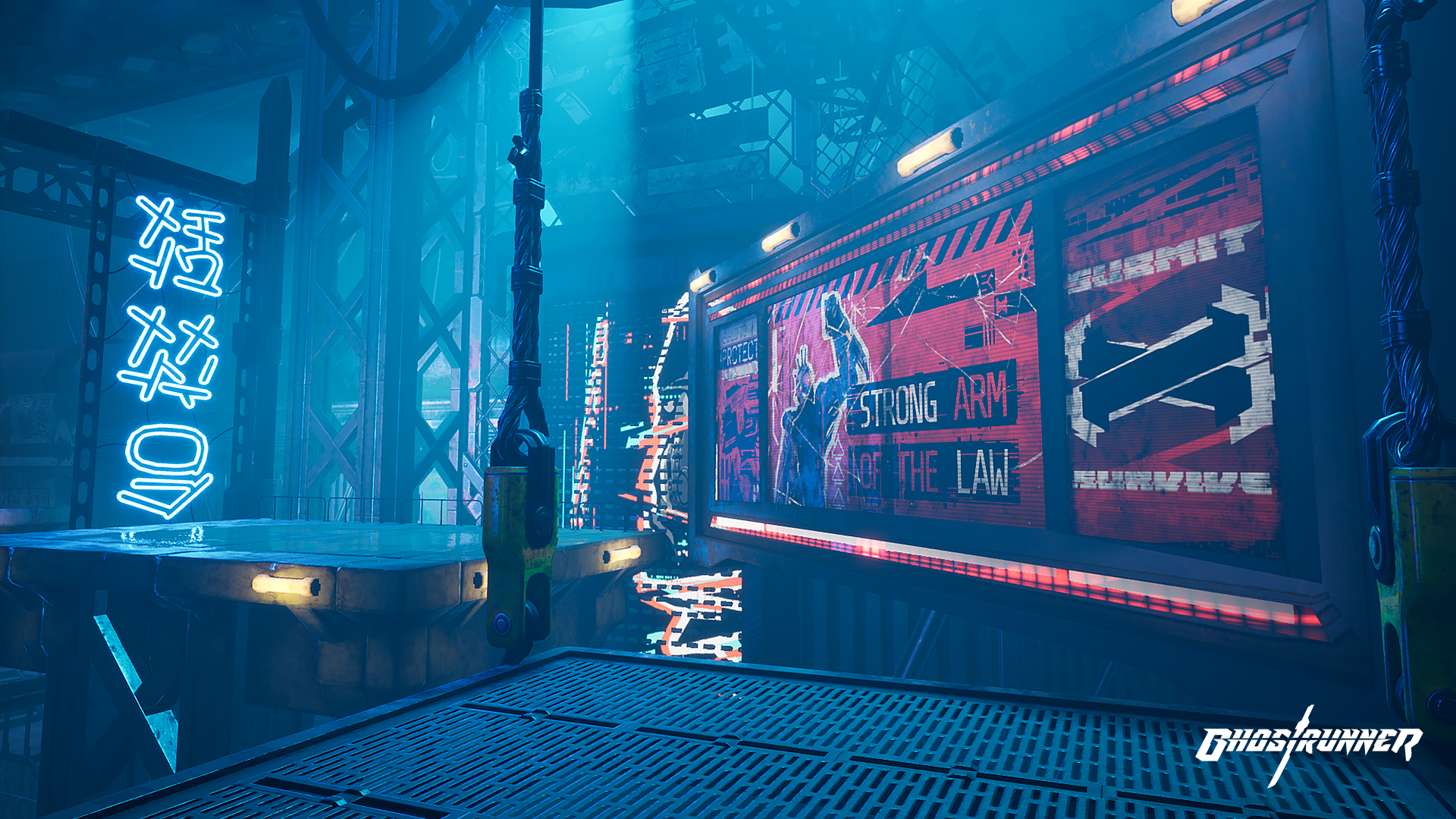 Some of you may recall my time with Ghostrunner at PAX East 2020 (which was, I believe, the final gaming con to happen since the pandemic). My experience was filled with nonstop obscenities spewing through my mouth. The demo was hardcore difficult, with me unable to even beat the level in the hour that I was given to play it. Here’s the kicker: the level I played was the tutorial, with the rest of the game apparently even harder than what I had witnessed!

So why did I decide to try playing Ghostrunner again? Was it a “won’t quit” attitude that pushed me to continue onward? Did I finally figure out how to conquer the tough areas via the free demo the developers offered before its release? Or maybe I just wanted to try to get better in a gaming genre that I normally wasn’t an expert in? 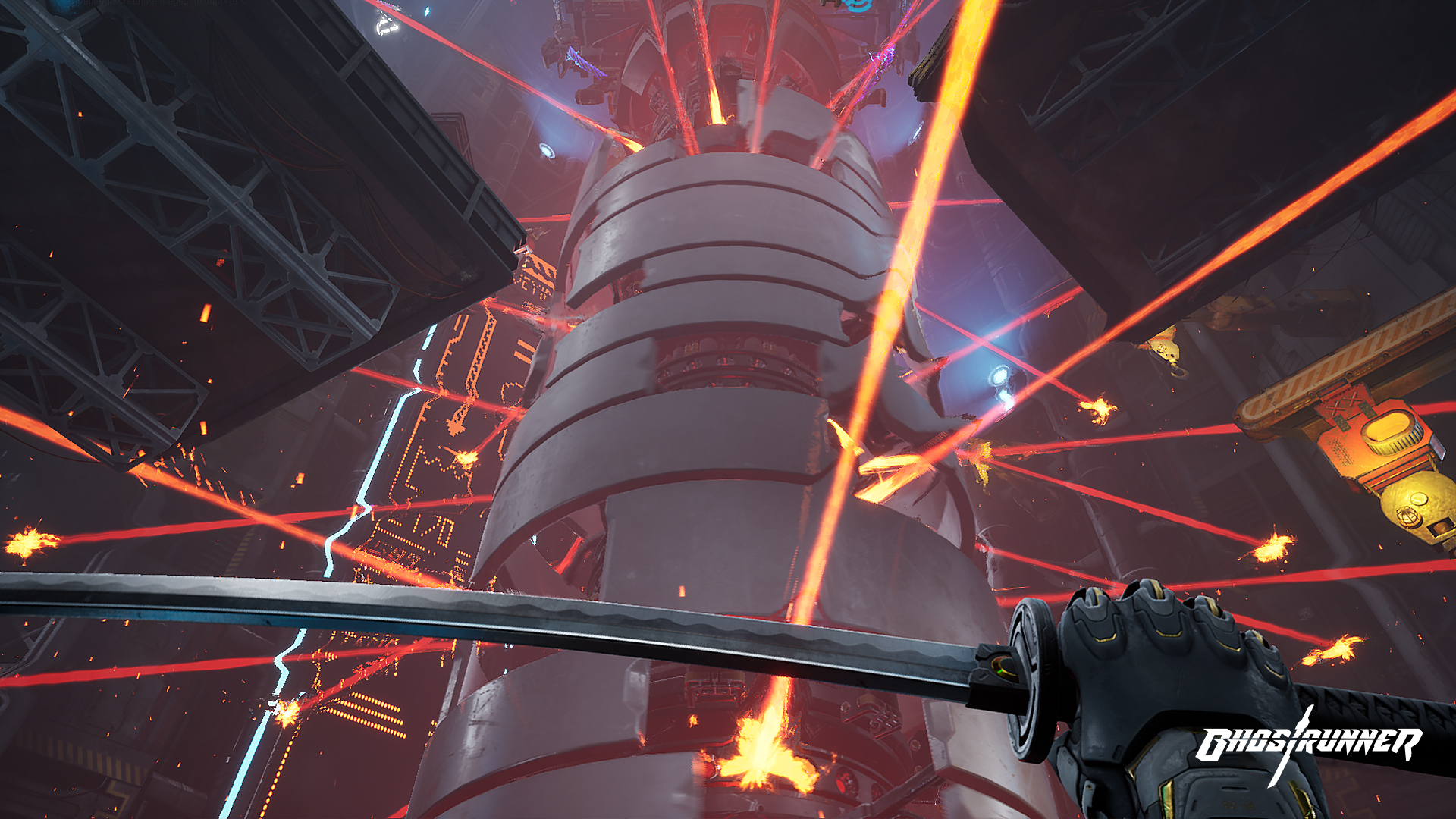 Nope. None of the above. I said to myself, “Hey, maybe there’s a difficulty setting that’ll let me tinker the game to my comfort level.” Well, I quickly found out after checking the settings and pressing start on the New Game option that I was completely out of luck. Ghostrunner was tailored to be an insanely difficult game, and I had to suck it up and dive in all knives and guns blazing!

First and foremost, the world of Ghostrunner is a beaut to behold. The post-apocalyptic cyberpunk realm fits perfectly with the story that it wants to tell. If the game allows you a few seconds to breathe, that time should be used to look at every nook and cranny that each area had. Its soundtrack, composed by synthwave extraordinaire Daniel Deluxe, is nothing short of a banger, and it fits wonderfully with the action and setting that fills your screen. 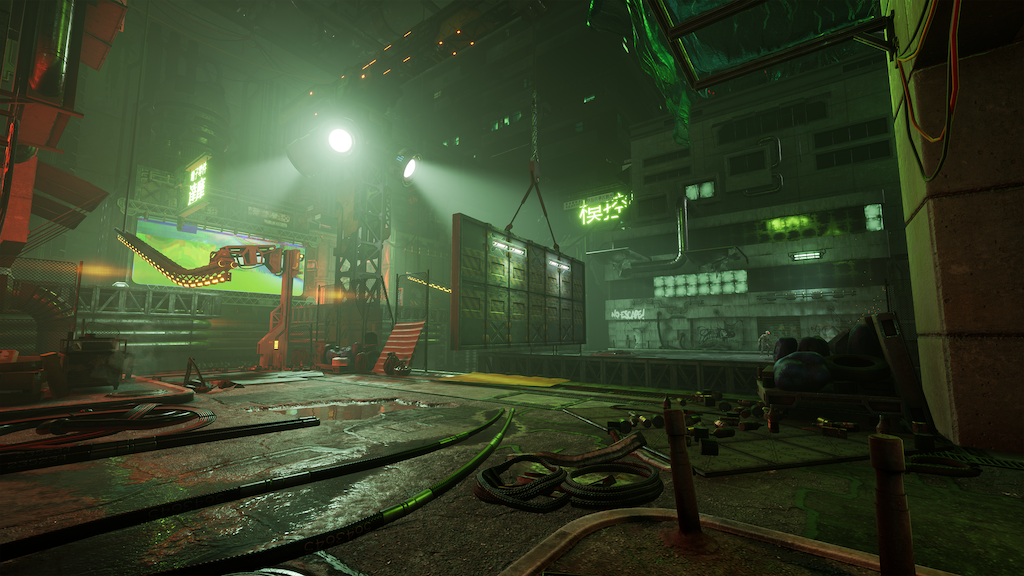 With all of that being said — and I know this is a phrase that gives certain people scowls on their faces — Ghostrunner is not a game for casual players. Despite my 30+ years of playing video games, I still consider myself to be just a couple of points higher than “casual”, as there are certain games that I am very good at. But if you are not good at thinking and moving quickly, then you’ll be given a rude awakening when you boot up this title. And then, every time you’re reawakened, it’s another smack across the face with a wiffle ball bat!

This game gives you zero time to plot out any true game plan when dealing with enemies and the like. One step out of the most recent checkpoint respawn, and you could very well be greeted with a bullet to the brain! As such, the mentality that this game requires you to have is to not think, but instead move and flail your body as much as you can! For someone like me that requires a lot of planning when tackling levels, Ghostrunner is not something that I can mentally handle. 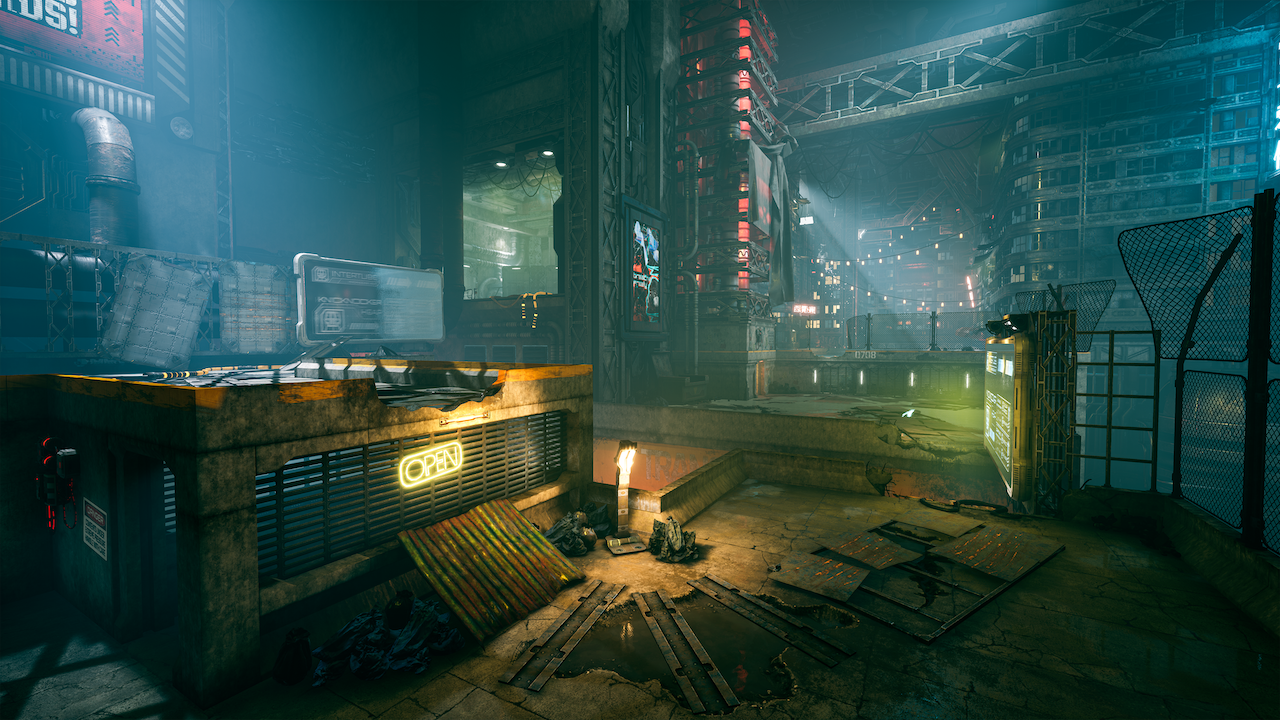 The first few times I died, I reacted with the usual jokey groans that most people do. When I was at around my 30th death, the jokiness vanished and was replaced with curse words both in English, Japanese, and the one or two French and German ones that I knew. At around 100 deaths, any form of vocabulary was gone, with nonsensical caveman grunts & yells now in its place. Finally, at around the 200th time I lost, all that I could muster up was a ticked-off stare partnered up with complete silence.

It’s at around this point when I had to take a cold hard look at myself in the mirror, and realize that I wasn’t getting past this level at all. I won’t be able to experience the full story that Ghostrunner had to offer, nor would I witness the many other (far greater) challenges that it wished to throw at me. Sometimes in life, you have to admit that the best thing to do is give up at the things that you’ll never be good at. In my life, those given-up things include bicycling, driving, skateboarding, ballroom dancing, crocheting, and — now — Ghostrunner. 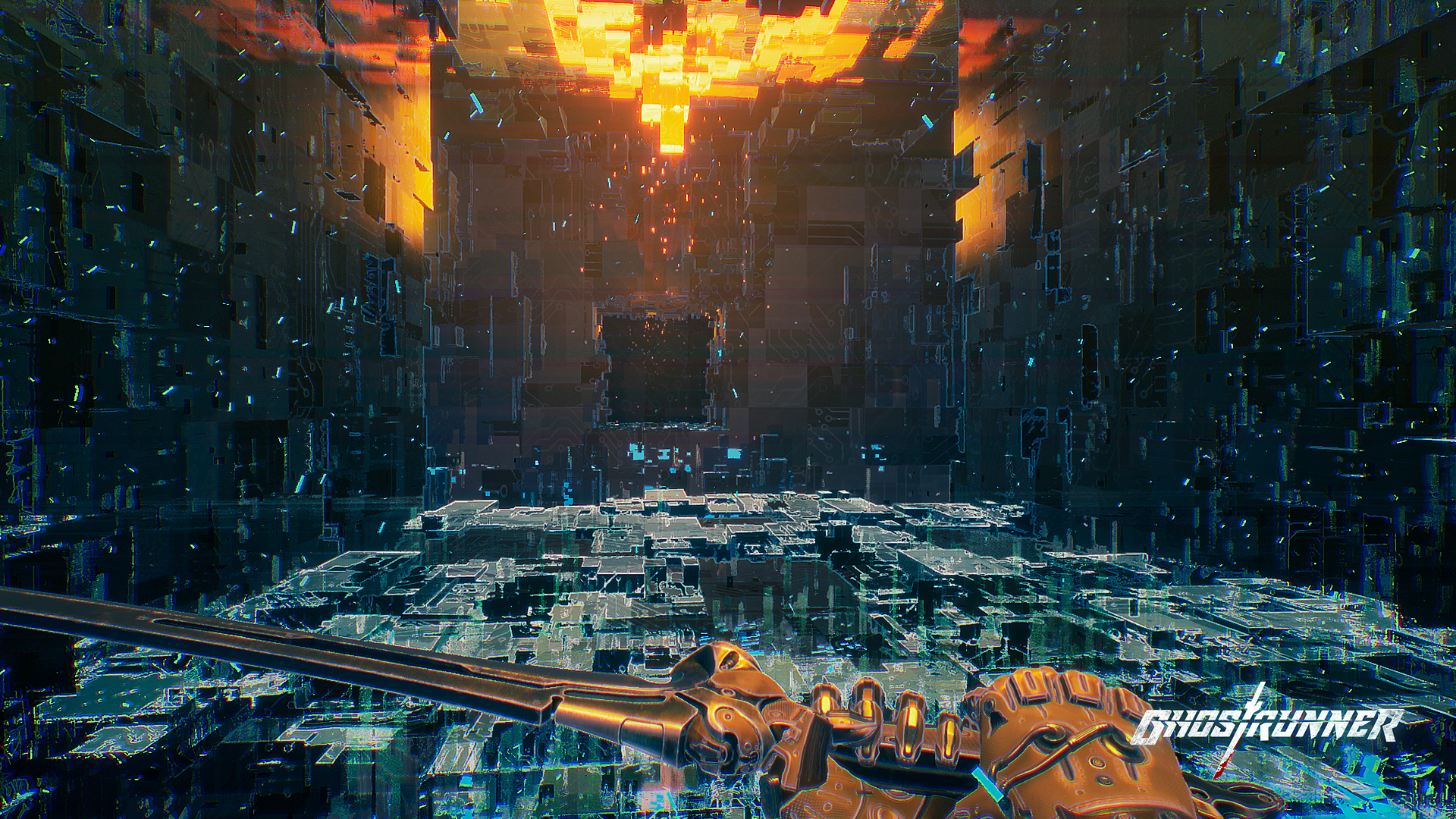 However, I for one am glad that a game like Ghostrunner exists. From the people in my friends circle that have conquered it, they’ve told me that the overall experience was a blast. In fact, some of them have gone back to replay it to see if they can better their speed runs. And how can one be angry at a game that has brought so much joy during this current state of the world. Although my time with it wasn’t sunshine and rainbows, there are plenty of others that were left feeling gleeful once they completed it.

As such, I have no choice but to bow to One More Level and Slipgate Ironworks for crafting one of the most challenging gaming experiences of 2020. Yes, I may never beat it, but for what it’s worth, I’m still happy that I got to experience the level of insane difficulty that they concocted. If you’re someone that wishes to experience a first-person brain-wracker that’s as tough on the fingertips as it is gorgeous to the eyes and ears, then Ghostrunner will certainly quench your thirst. However, if you like playing at your own pace, then I suggest following me to the Exit.

With that, there’s only one thing left to say: I SUCK AT GHOSTRUNNER!

Promotional consideration provided by AJ Trulin of Stride PR. Played on the Xbox One.

And now, our friend JonStar from Wicked Anime has a more thorough opinion of Ghostrunner to share:

When Evan introduced me to Ghostrunner back when the demo hit Steam, I knew the game was going to be a Day One purchase for me upon completing the demo in about 15 minutes or so. The decision to buy the full game was no mistake, for it’s easily one of my top games of 2020. Is the game still hard for me? Hell yeah! Beyond frustrating at times, but the challenge is found in the trial and error of the game allowing you to figure out the path and rhythm that will lead to your inevitable victory.

The game relies on your skills of lightning fast reflexes. The controls are tight, in the same vein as speed runner games like Super Meat Boy or Celeste, but also adds in the control dexterity of a faster FPS game like Doom Eternal. The game allows you to instantaneously restart from short iteration checkpoints every time you lose, so that you are never bogged down by loading screens or having to replaying cutscenes before dying again and repeating the process. As soon as you die, you can hit the reload button and jump right back into slicing bad guys into various pieces. You are gonna die a lot, but every time feels like your fault, and the no wait time between tries never pulls you out of the fun.