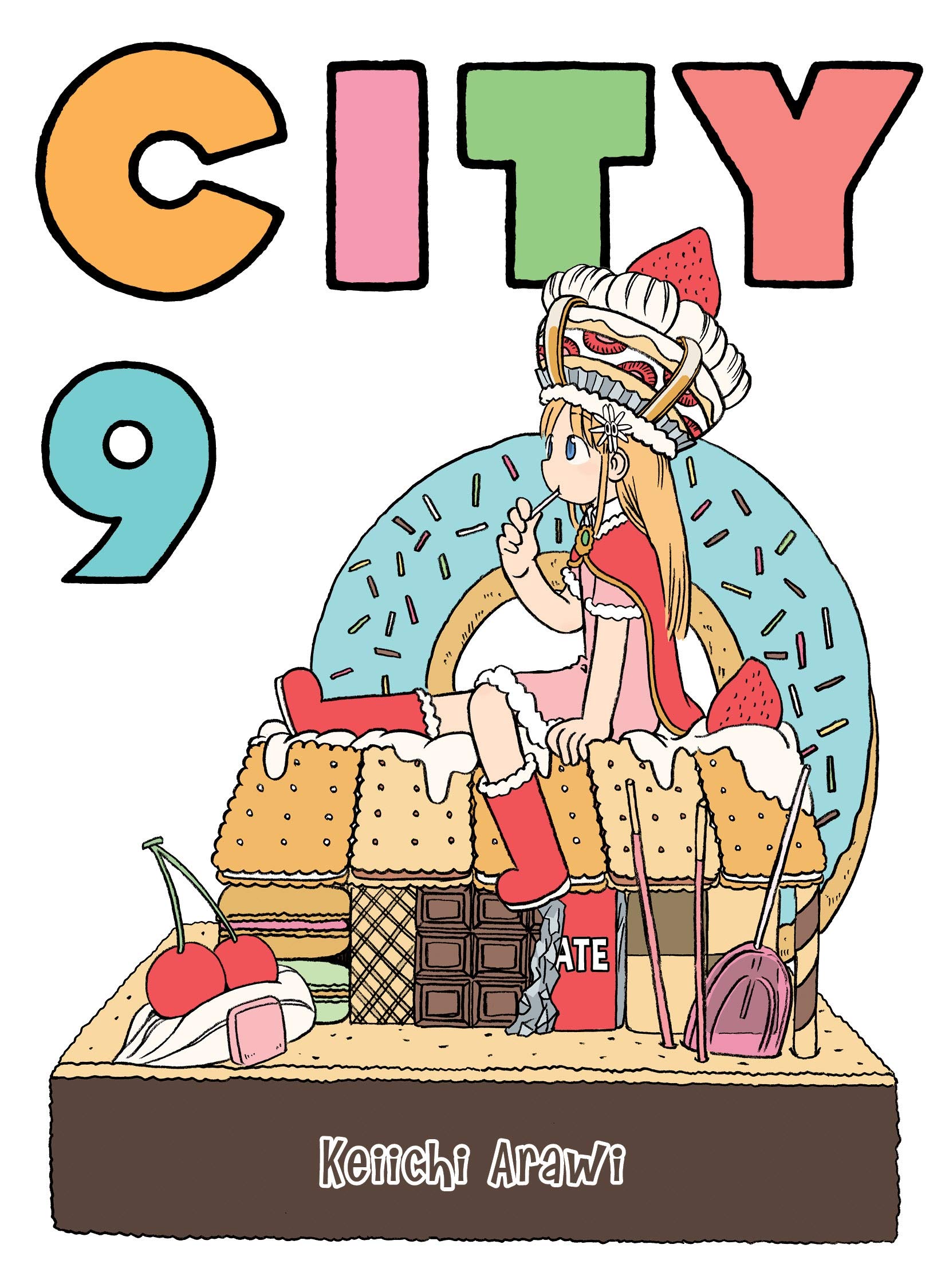 The comedic prowess of Keiichi Arawi’s CITY can be a tough nut to crack. Sometimes it delivers visual hilarity for all to enjoy; other times it’s apparent that Arawi is only speaking to his Japanese audience (something that made nichijou sometimes hard to follow). But in the end, the punchlines delivered almost always find a way to hit every target from across the globe. Volume Nine of CITY teeters between worldwide and Japanese comedy, while at the same time finding something to make everyone chuckle.

With the race ending in Volume Eight, things go back to as normal as can be in CITY, meaning not at all! However, love is in the air, as Tatewaku attempts to ask Izumi out on a date, leading him to go seeking that perfect fashion look for an outing. Meanwhile, Shia tries every obnoxious trick in the book to worm her way into Tatsuta’s heart, while Ecchan tries hard to think of how she really feels about Tatewaku. There’s also the love for riches, as Nagumo tries her hand at every sort of contest and quiz that crosses her path.

One of the standout moments in this volume is Tatewaku’s visit to Boutique, as he searches for that perfect first date shirt. He’s greeted with some top-tiered designers (one of them a town native, of course), resulting in him spending more money on a shirt that’s worth a fraction of what it’s actually worth. (Considering some idiots bought a plain white t-shirt by Kanye West for hundreds of dollars, I’d say this aspect of expensive faction rings true to life!) It all leads up to him finally gaining the courage to ask Izumi out, with the pathway scattered by certain folks who want to hilariously sabotage him.

Another great chapter also involves Tatewaku, as he, Matsuri, and Ecchan struggle to come up with the perfect rock band name. Again, it’s another real-life dilemma, with almost every name one can think of already being taken. Ecchan pointing out that some bands have names that are more like song titles also brings to mind real-life acts Godspeed You Black Emperor, ...And You Will Know Us By The Trail of Dead, and NICO Touches The Walls, which can lead to some silly confusion. It’s when Tatewaku tosses up one final band name when the trio realizes just how screwed they are at finding one that’s not already taken.

However, this is the first time in CITY where not everything hits its mark. A chapter involving a spy for the town soccer team makes it seem like it’s trying to go for laughs. Instead, every team player reveal feels more like a shrug and an utterance of “Cool, I guess.” With that being said, seeing the spy be frightened enough to have the literal わ symbol (used to showcase a frightened scream in manga) is pretty funny.

CITY finds a way to keep the laughs going, even if a joke stumbles. Its ninth volume may have shown some of Arawi’s comedic flaws, but at the very least it shows how the manga can bounce back with a good gag. Seeing a series transcend past its core audience can always be a great thing, as it helps make comedy more universal than it was in the past. Arawi has done this well with CITY, and even if one gag falls flat, one cannot deny just how tasty the rest of its humor is.