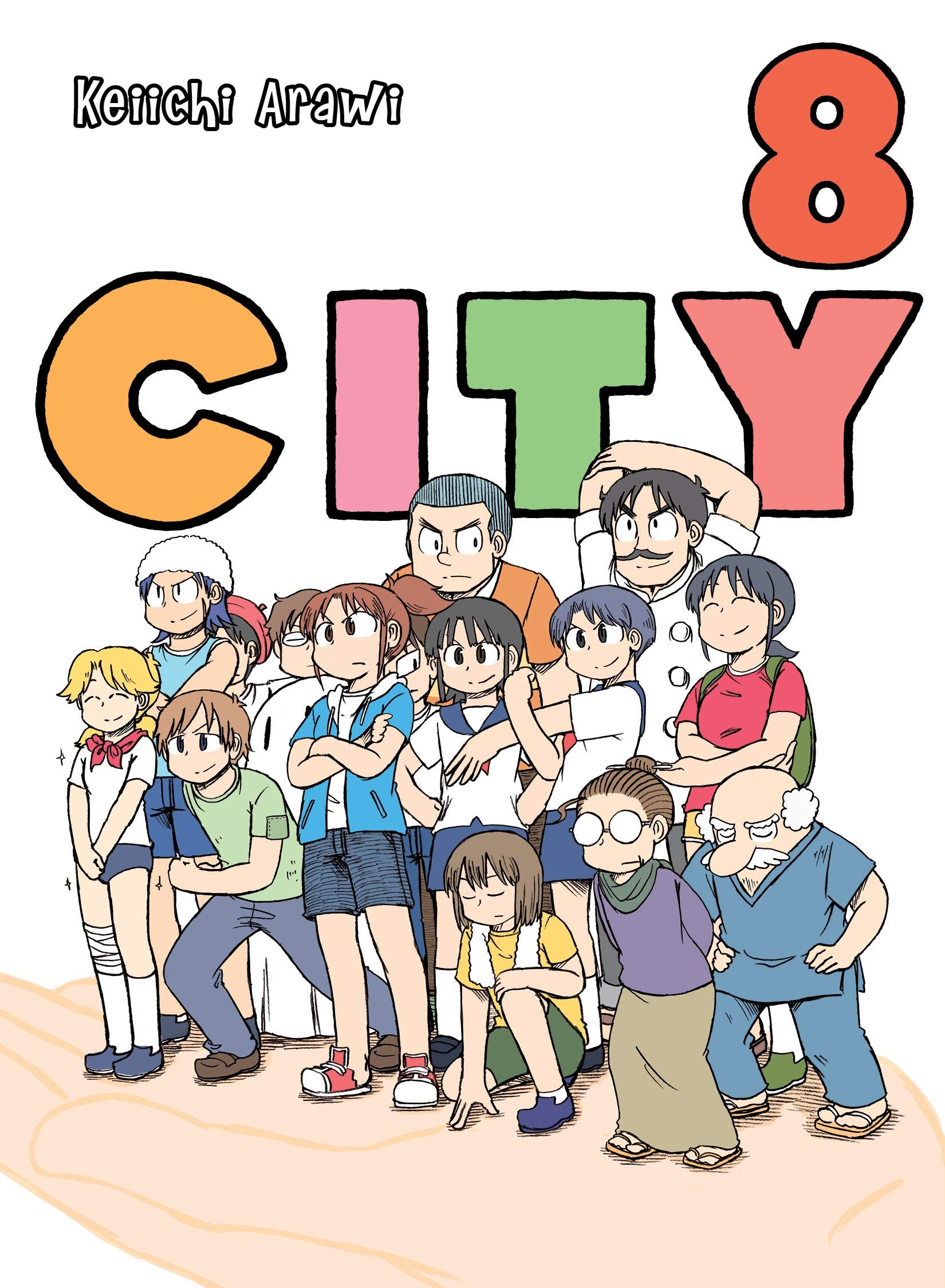 It’s always a great day for a race. But when you get the citizens of Keiichi Arawi’s CITY involved, that race becomes something that not even the late Blake Edwards could bring to life on the big screen. In its eighth volume, the town goes all in for a major spectacle. As one can expect, readers will have a front-row seat for the mayhem that CITY is about to unleash.

The 4th Local Race kicks off, as eight pairs of racers go for a million-yen prize. There are the predictable pairs like Niikura & Nagumo and Matsuri & Ecchan, as well as some strange duos like Granny & Wako and Tekaridake & Mr. X. With four big obstacles along the way, ranging from giant walls to same-word contests, the competition is bound to get hotter than Tsurubishi’s western cuisine. But within the background is the real reason behind the race, as well as another plan underway to let a certain pair gain victory.

There’s no way anyone can expect a straight-forward race to come from Arawi’s mind. Instead, readers are treated to pure unadulterated chaos in ways only CITY can deliver. From angry spectators wanting in on the race to loan sharks wanting every penny back from Tekaridake’s theater spendings, the looniness that unfolds brings together a mixture of Looney Tunes and Wacky Races in foot race mode. All of it is as kooky as it can get, and then some!

Of course, there are some setbacks with some of the participants. Dr. Adatara and Tsurubishi take their sweet time with the race, only to pull out an insane secret weapon that should be against the rules. Kamaboko Oni & Todoroki deal with Wako, only to reveal her true drawing talents that sets back both the writer’s will to race and the will to even create. Then there’s Granny, who schools every young’un with her karate skills, even those who craft a damn religion after her!

But within the competitive carnage is a slice of sweetness. The pairing of Tanabe & Tatsuta is nothing but adorable, as Tanabe literally faints from her happiness over Tatsuta carrying her. Perhaps the most tender-hearted pairing is that of Matsuri & Ecchan, who have far better reasons to win than ones involving mere money-grubbing. There’s also the truth behind the race itself, which has a certain butler doing everything he can to make sure the one he watches over is triumphant.

Who wins? Does it matter? If you know Keiichi Arawi by now, then you'll realize that CITY is all about the unpredictability. In Volume Eight, the upset victory that occurs will no doubt have you fainting from joy over the first-place combatants. You’ll laugh your ass off as much as cheer for your favorite duo, with CITY delivering a race that proves that it’s a mad, mad, mad, mad world! Just remember: BYO!

GAME REVIEW | A Workout of Carnage...