HomeComics/MangaMANGA REVIEW | "If Witch, Then Which?" - Volume One

MANGA REVIEW | "If Witch, Then Which?" - Volume One 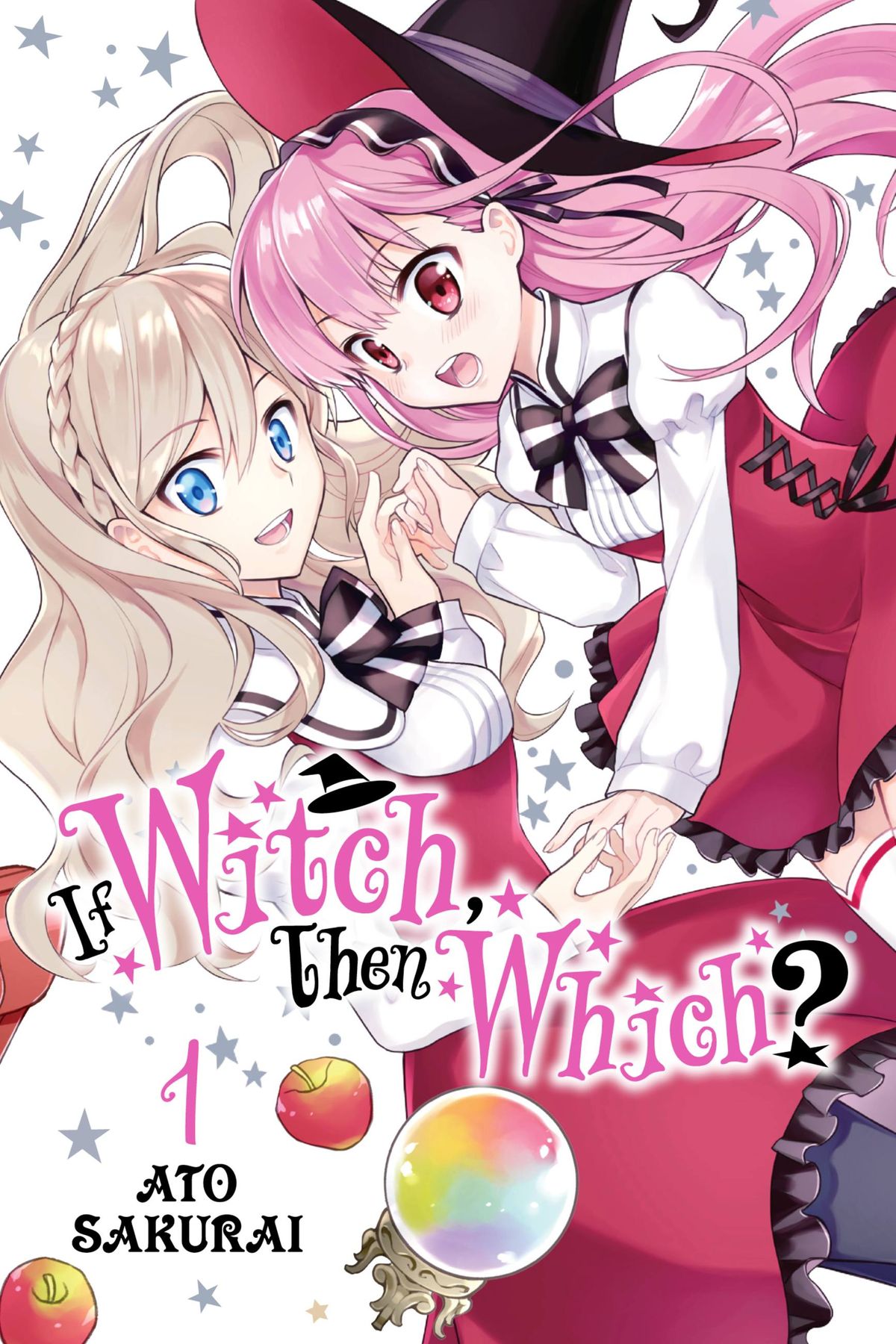 MANGA REVIEW | "If Witch, Then Which?" - Volume One

Witches with poor track records have made interesting stories in the past, from the movie The Worst Witch to Studio TRIGGER’s anime Little Witch Academia. There’s plenty of story to pull from this sort of plot, but it can often find itself repeat the same spells over time. Such is the case with Ato Sakurai’s If Witch, Then Which?, which does follow similar formulas from the past. Fortunately, one little plot twist keeps it from being a complete rehash of the stories of old, and it has to do with our main heroine’s friend.

Haruka has a mighty debt to pay back to Maruna, who gave him a life-saving blood transfusion when younger. One day, Haruka stumbles upon Maruna’s secret: she is a witch-in-training, and is working to get into a prestigious magical academy. Just one problem: Maruna’s low blood pressure makes it nearly impossible for her to conjure up spells. After spending a day helping her train, Haruka comes up with a plan: with his ability to raise Maruna’s blood pressure, the only way for her to succeed is to go to the witching school with her. 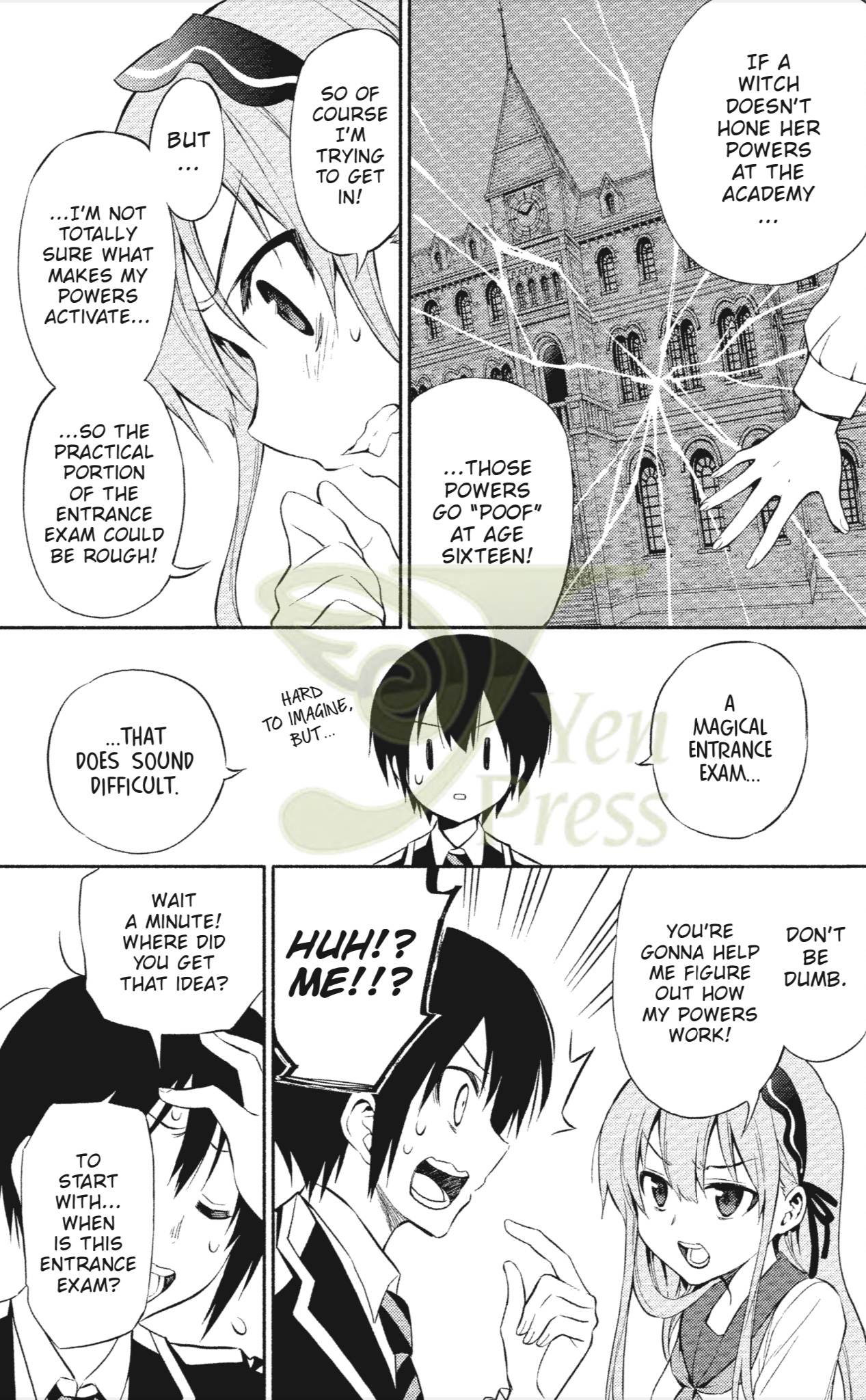 And thus, with a wig and a dress, Haruka sneaks into the admission’s test, helps Maruna pass, and the two find themselves becoming partners on the quest to bettering her skills. As one can guess, now Haruka has to do his best not to get caught, as a grim fate could befall him if his true gender is revealed. Doing his best, Haruka attempts to stay in the background has he gives the right amount of aid to Maruna’s journey. But as one can imagine, the task of keeping one’s true identity will be anything but easy.

There are some good elements in the first volume of If Witch, Then Which?, especially when it comes to the main duo of the series. Both Maruna and Haruka have very good character chemistry, in a way that has them switching between who is the straight man in its more comedic moments. It’s very apparent that they care deeply for one another, but the awkwardness of Maruna and the zero-filtered Haruka help to keep the punchlines going. This is very apparent when they interact with other students, as Maruna attempts to hold back from walloping Haruka whenever he speaks bluntly. 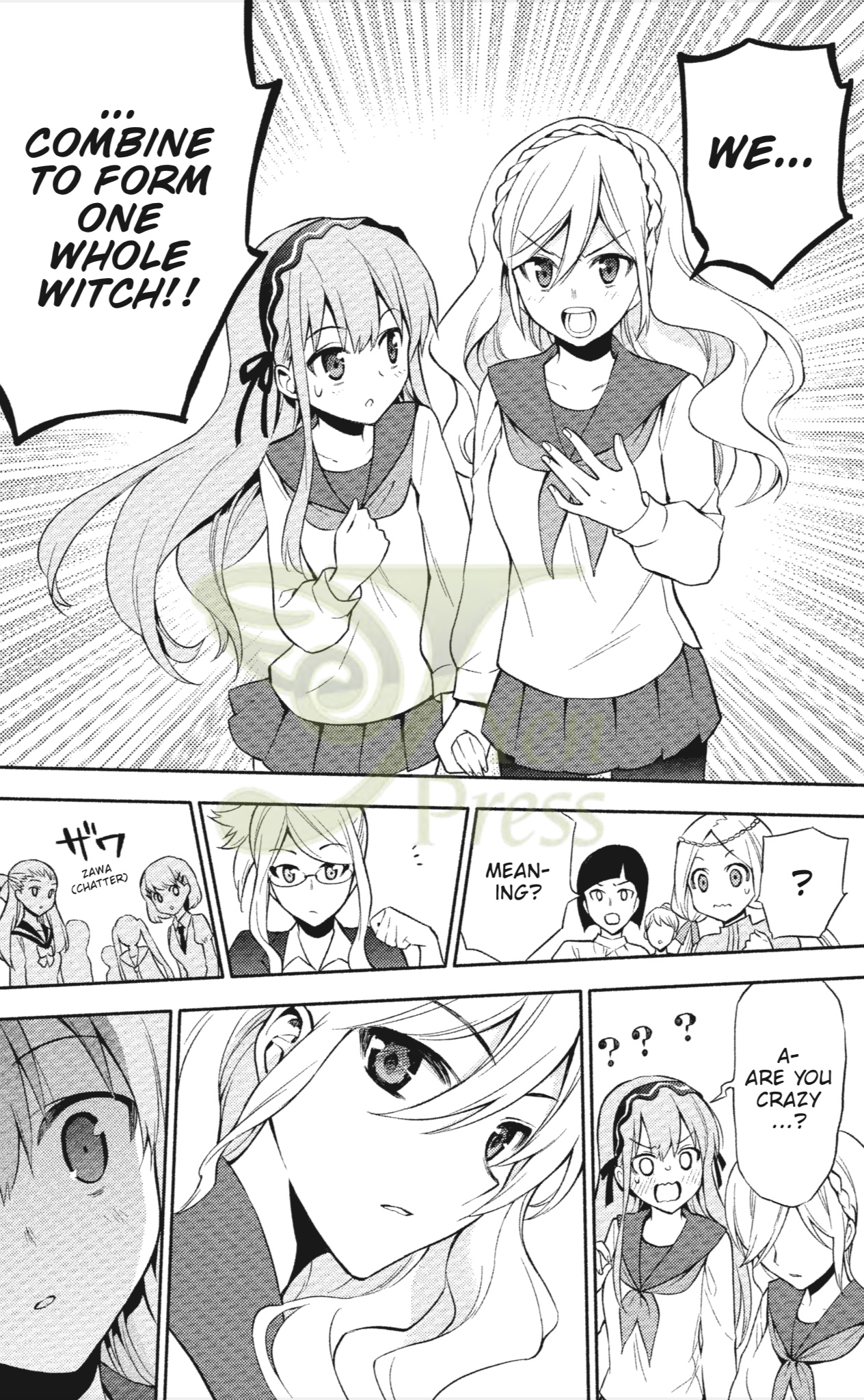 What’s also refreshing is that Haruka’s need to cross-dress in order to stay in the witch’s school isn’t played for laughs, but rather as a reasonable plot device. Yes, the idea of pretending to be a different gender to achieve a goal has been done before (both horribly and surprisingly well), but Haruka isn’t doing it for his own selfish reasons. Rather, it’s his way of paying back Maruna for saving his life, with him going extra lengths to make sure he can help her graduate. In its own way, Haruka’s gesture can be seen as sweet and noble, even if it may lead to some awkwardness somewhere down the line.

With that being said, there are still some plot elements that seem too rehashed. I think I’ve lost count of how many stories involving witches have had the bad broom-riding schtick. Even if the way Maruna overcomes this hurdle is slightly different than in the past, the process of going from terrible to good at flying has been done to death. So much so, that the end result is almost painfully predictable, to the point where it’s somewhat of a chore to read through it. 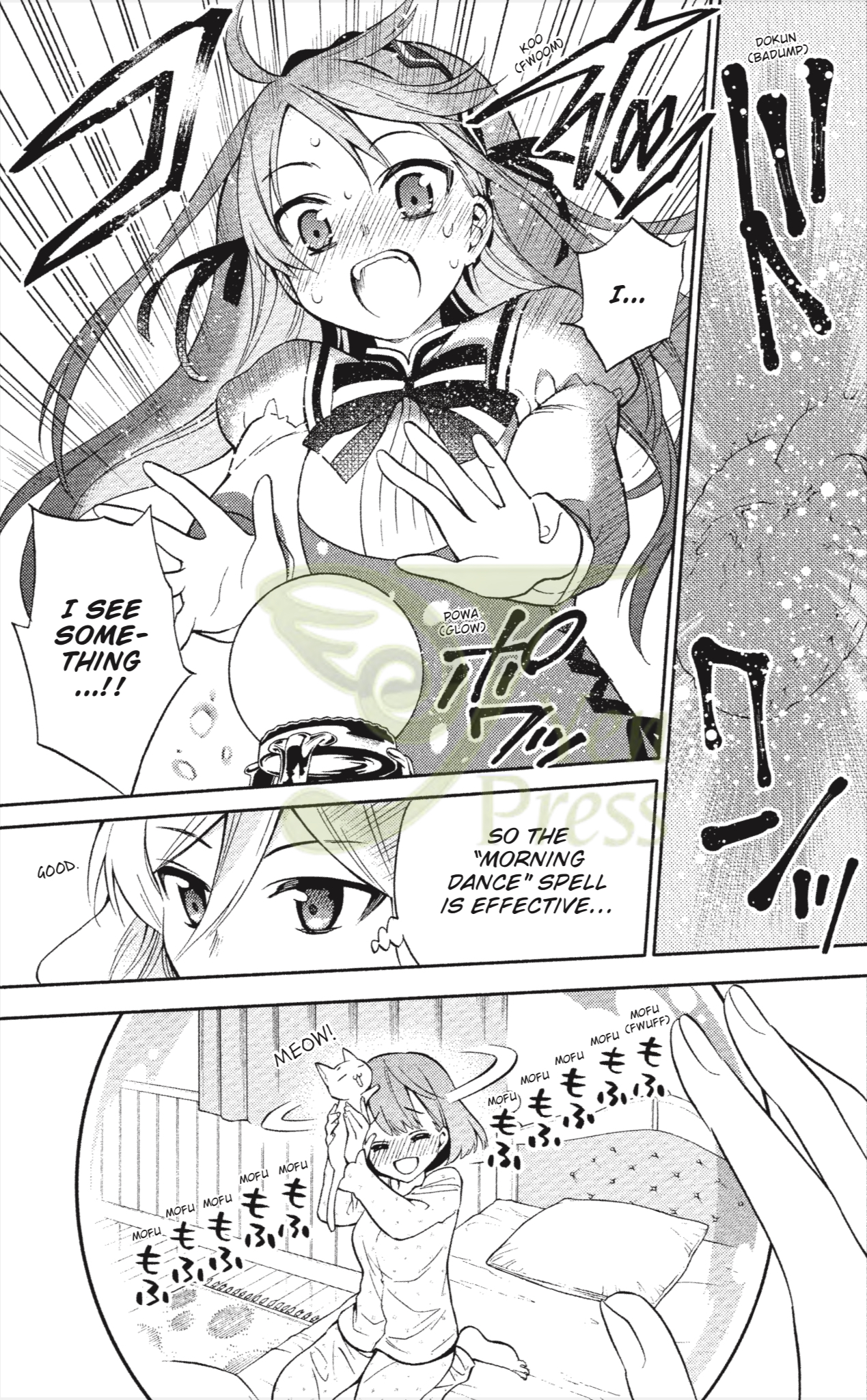 One story I did enjoy involved the crystal ball reading class. Pairing up with new friend Miyu, Haruka and Maruna attempt to not only learn how to read people’s minds and fortunes, but also find a way to keep Haruka’s secret from coming out. I’ll admit that I did not expect them to go the route they did with what Miyu sees in Haruka’s reading, as the gag was genuinely funny. Plus, there is the hidden mystery behind the whereabouts of the school’s top student, which might’ve been revealed through a certain disguise.

If Witch, Then Which? has a lot of potential, but it needs to back away from plot devices that’ve been done one too many times. Thankfully, its twist on how Maruna’s magic works may make for some interesting storylines in the future; not to mention Haruka’s own dilemma regarding not getting caught. With enough room to grow, Sakurai’s magical fantasy could be a memorable one in the long run. However, revisit old tricks, and If Witch, Then Which? might find itself an eye of newt short of a bubbly concoction. 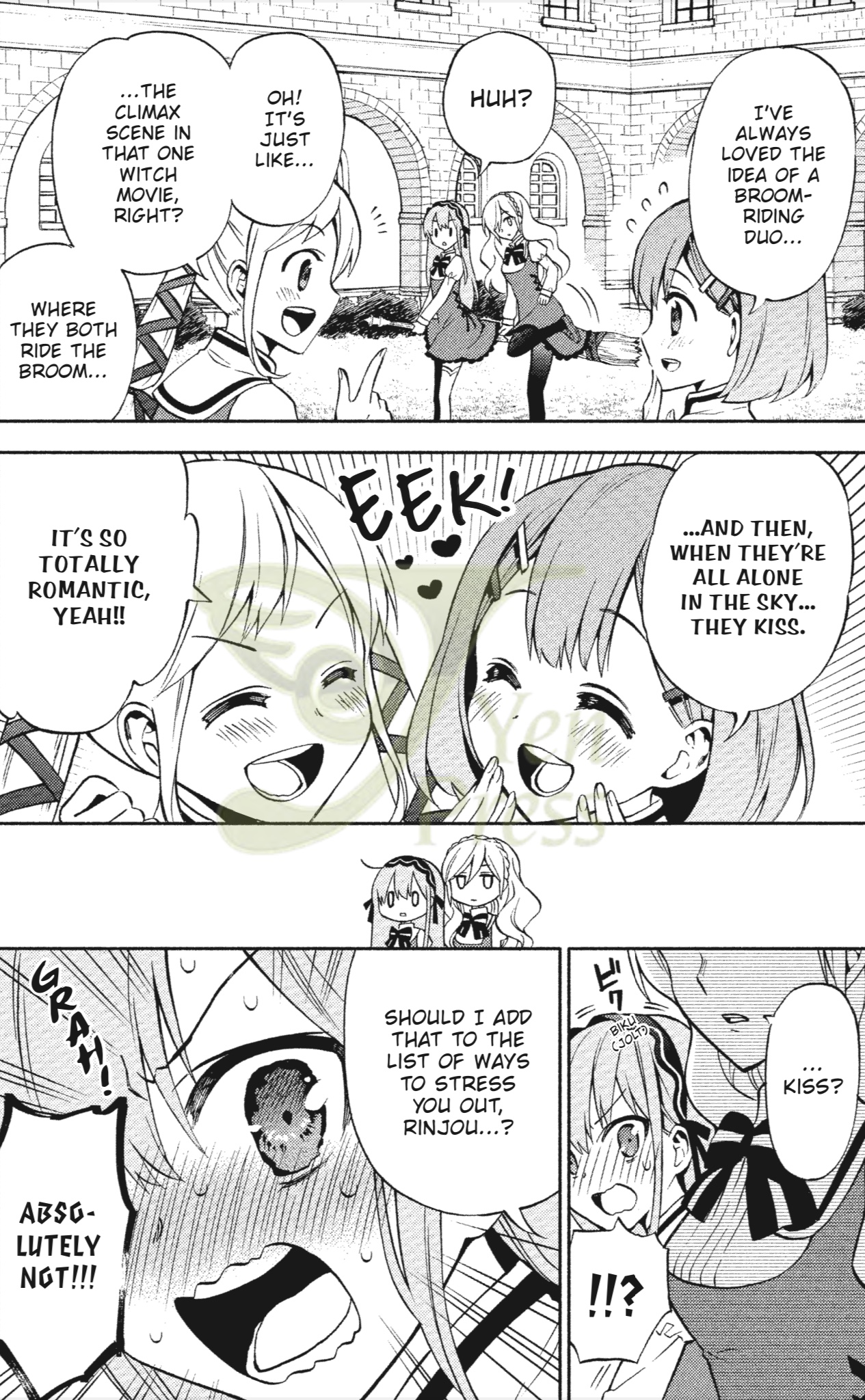