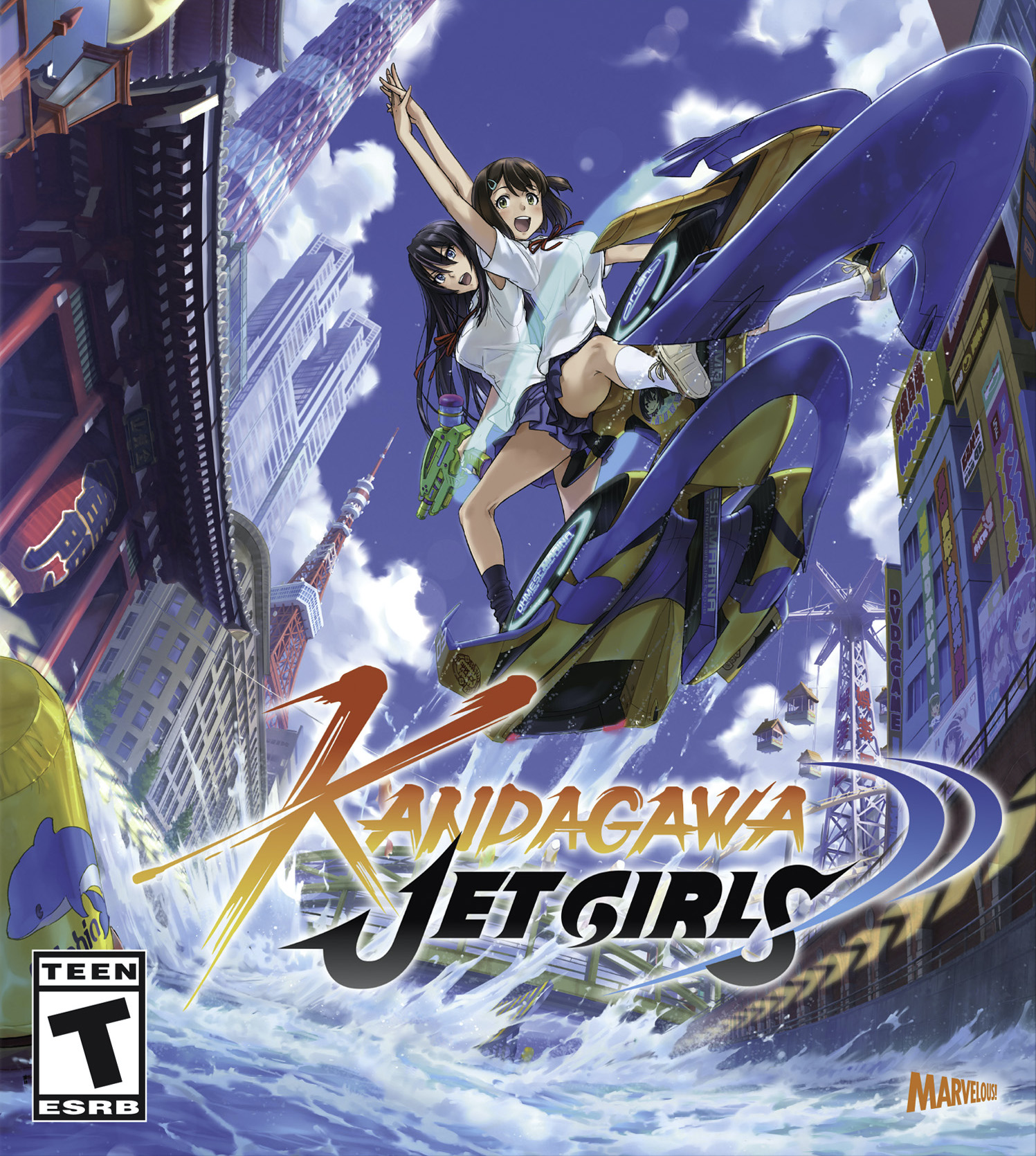 I have a very big soft spot for whatever Kenichiro Takaki creates. His Senran Kagura and Valkyrie Drive franchises have delivered a mixture of incredibly fun titles and some that are worth at least laughing through. (The series also feature some wonderful character designs, many of whom have been the subject of a bountiful of drunken “Best Girl” arguments within my friends circle.) Teaming up with Gargantia on the Verdurous Planet character designer Hanaharu Naruko, Takaki attempts to strike waifu gold again with his latest game Kandagawa Jet Girls.

The race aspect of Kandagawa Jet Girls has a duo taking control of an amped-up jet ski, with one teammate driving the vehicle (Jetter) while the other acts as both defense and offense (Shooter). Participants drive through the track, which have their fair share of speed boosts, jumps, and secondary weapons. Powering through the tracks, racers must take out their opponents, while at the same time juice up their boost system in order to gain a little extra speed or — when reached at 100% — unleash a massive attack. On top of that, players can also attempt some cool moves and poses in order to earn coin for the in-game shop. 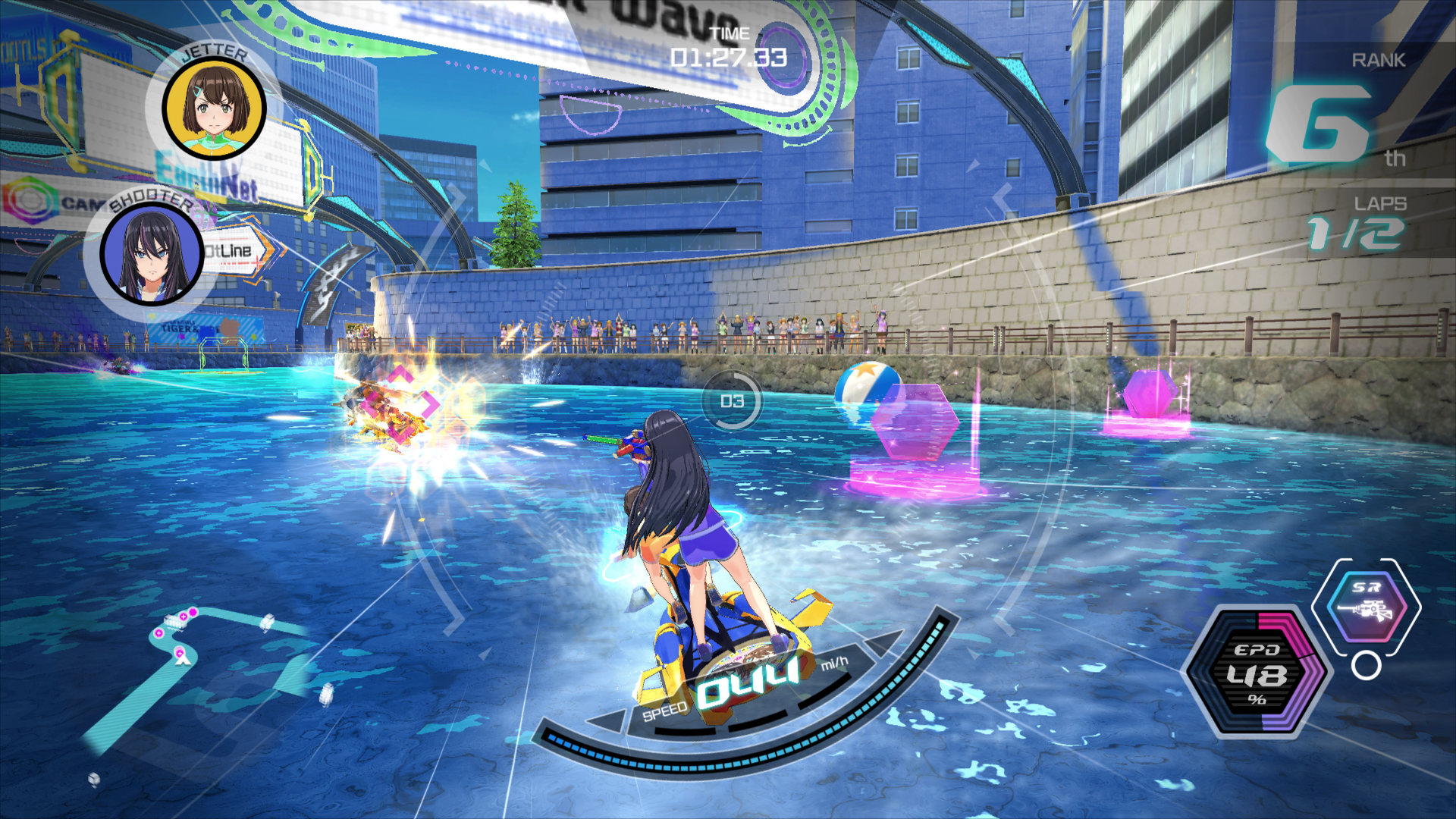 For shop items, there’s a plethora of costume and jet ski designs to help make your racers stand out. Outfits and bikinis that your characters can wear are both cute and sexy, adding a little extra zest into your competitive nature. Jet ski upgrades will help with tinkering with your speed, handling, and even add a little visual upstaging when you burst into high gear. If you don’t have enough dough to get the thing you want, you can easily earn more cash in some cute mini-games, which range from jet ski-washing to speed mopping.

For the racing mechanics, one cannot help but be impressed by what Kandagawa Jet Girls offers to curious onlookers. The handling in the game is surprisingly well-coordinated, with the ability to make quick turns and even drift tailor-made towards a competitive-friendly style. When you conduct offensive shooting, the aiming system is polished, to the point where one can easily fire on an opponent while safely controlling the jet ski. (Kudos to the developers for also having it so an AI system controls your vehicle whenever you defensively shoot from behind.) 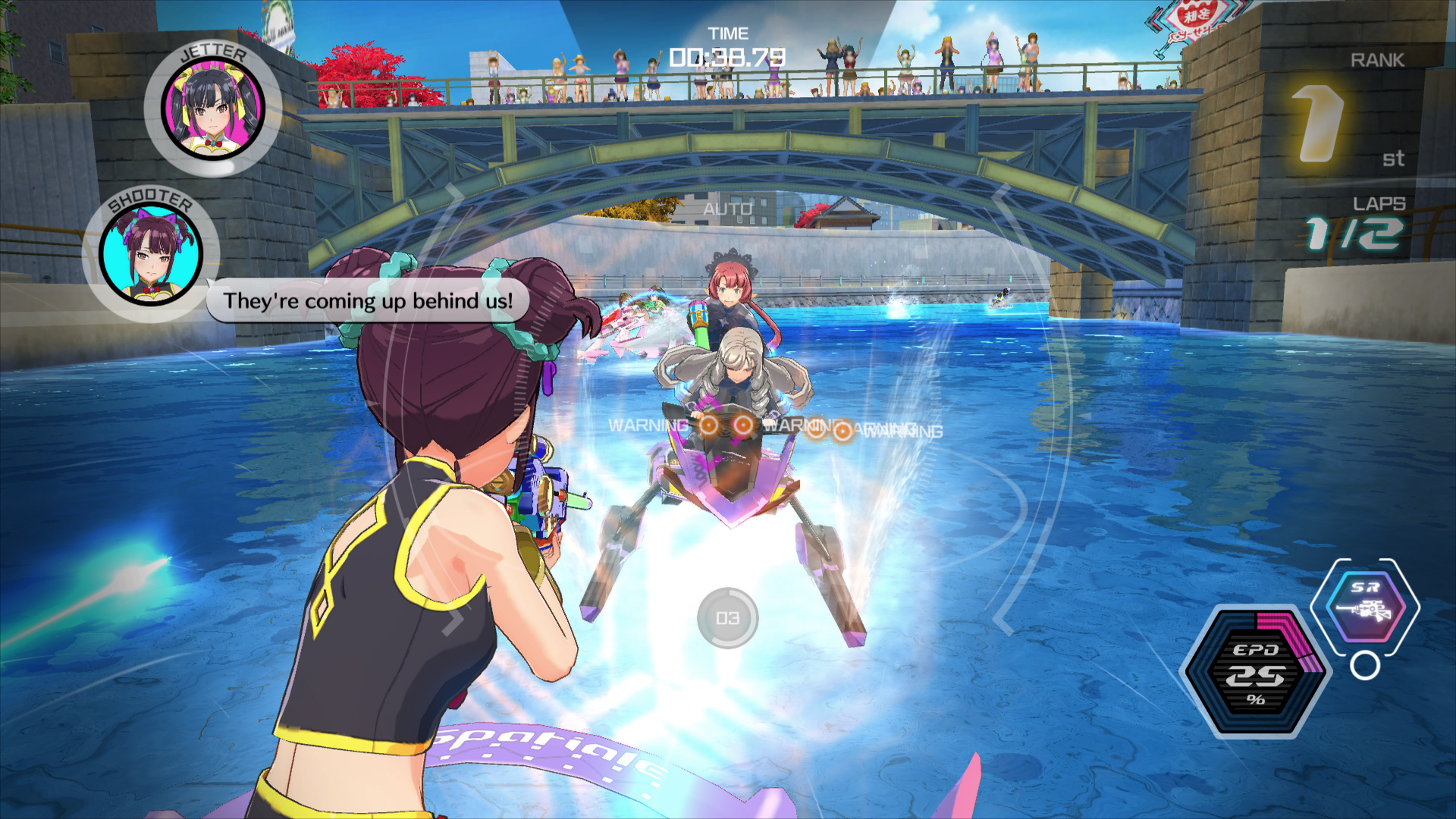 There’s a lot of personality that can be found within the watery tracks that you race on. Eye candy as far as anyone can see is splattered all throughout the levels, ranging from beautiful cityscapes to holographic characters meant to offer you some hidden goodies. Skiing throughout these levels has a well-ironed flow throughout each lap, as you strategize your drifts and boosts for whenever the time comes to pull a big win. These elements compliment the beautiful graphics throughout the game, with the cute-looking characters being a nice icing on its cake.

However, there’s a very big flaw with Kandagawa Jet Girls: the race difficulty. Very rarely did I feel challenged by my AI opponents, as I found myself leaving them in the dust early on into every race. As such, I barely ever needed to have my Shooter do anything, as it was somewhat redundant of them to waste their ammo. A great shame, as the gameplay itself is beautifully tailored to act as a competitively strong racing experience. 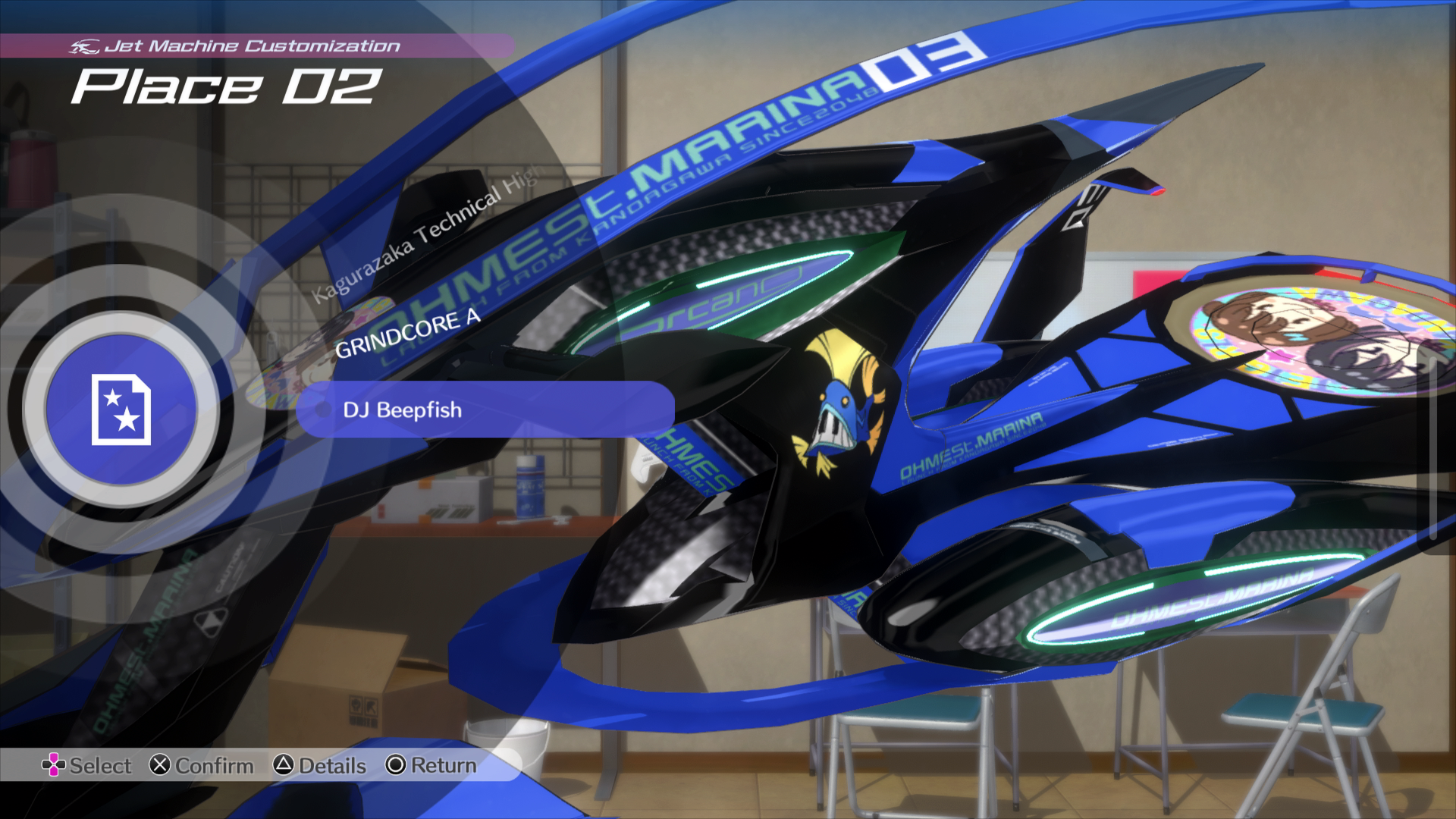 This leads me to the wastefulness of the jet ski upgrades. While the visual upgrades are cool to look at, the mechanical parts seem unnecessary, as one can easily beat all of the story modes with their default settings. Honestly, even when I upgraded my engine, I barely could tell the difference of how well it was handling. Perhaps if the computer AI system was a lot tougher to deal with, then there’d be a far better reason for these sorts of upgrades.

I mentioned Story Mode, which is split into various plot lines based on each team. The main story follows Rin & Misa, a newcomer team based out of Asakusa, Japan as they train to be the best. It’s a very paint-by-numbers tale, with predictable twists and a hokey can-do attitude spread throughout its narrative. There are some fun narratives, such as the idol adventures of the Hell’s Kitchen twins Dina & Ziyu and the surprisingly heartfelt back story of Shinjuku’s Manatsu & Yuzu. With that being said, I could go the rest of my life without hearing the awful Japanglish vernacular of Jennifer & Emily. (Oh well, it’s at least better than the anime version that aired last year!) 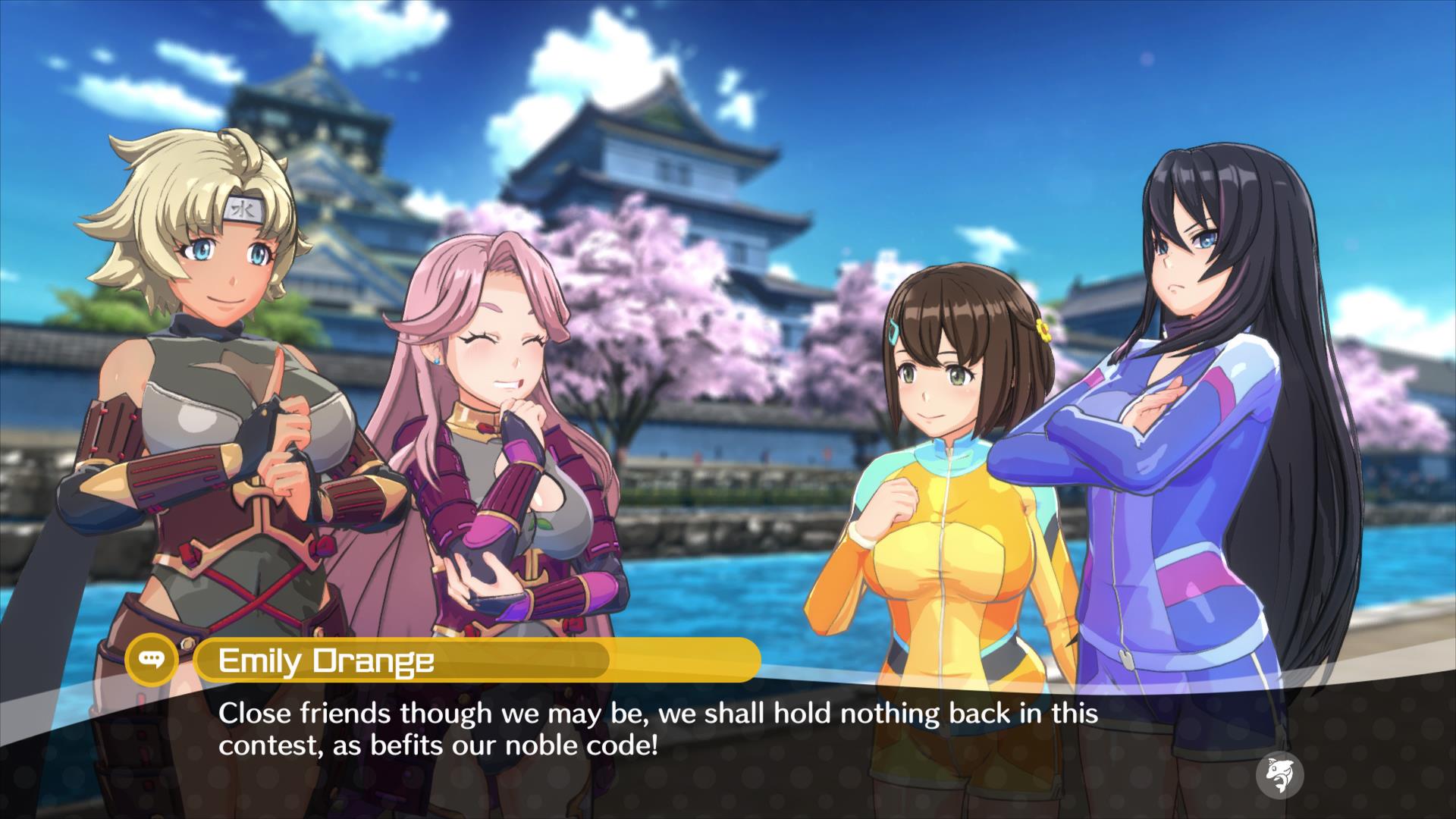 Perhaps the story mode is meant to boost one’s skills for its online racing mode. That would be a good reason for its easy AI, had it not been for the fact that there seems to be no one online to play when I go on! It’s frustrating when a game comes out with an already comatose online community, especially when Kandagawa Jet Girls greatly needs people playing to keep its scope above water. (Having everyone and their grandma currently playing Fall Guys certainly doesn’t help with this game’s cause, either.)

There are a lot of great ideas and mechanics spread throughout Kandagawa Jet Girls. Its racing elements are a lot of fun, and the characters & worlds are a sight to behold. Sadly, a too-easy AI system keeps Kandagawa Jet Girls merely at an okay level of enjoyment, when it could’ve easily been a superb game worthy of a photo finish.

Promotional consideration provided by Kaitlyn Hoyer of ONE PR Studio. Reviewed on the PlayStation 4.