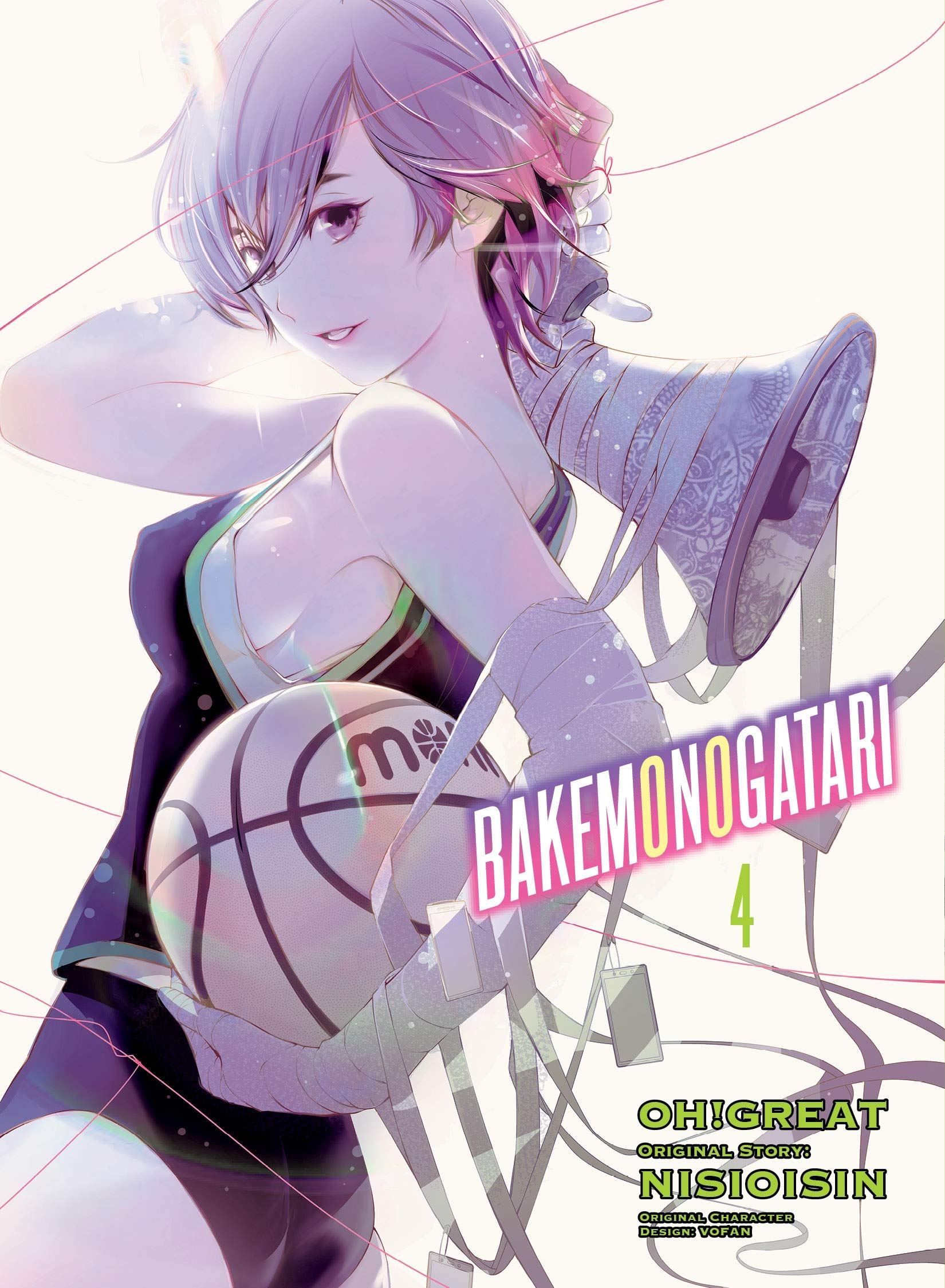 If there’s one manga artist to beat, it’s Oh!Great. His work on Tenjho Tenge and Air Gear brought about a visual style of great detail and personality, blending the cartoonish and realistic together in magnificent ways. However, Oh!Great has appeared to topped his own original works with his adaptation of Nisioisin’s Bakemonogatari, with every page punching its readers with beautiful imagery. It’s in the fourth volume where he truly reaches a god tier in the art department, while at the same time showcasing some impressive — albeit confusing — dialogue.

Now that Mayoi’s dilemma has been solved, Koyomi aims to have something of a normal life. With Hitagi accepting his feelings, the two begin to date and act, well, not at all like a normal couple. But the quiet way of life is interrupted by a mysterious figure in a raincoat, which comes out of nowhere to destroy Koyomi. That’s when he realizes that a new aberration has arrived, in the form of basketball star Suruga Kanbaru.

For some reason, the top sports star begins to follow Koyomi. Suruga spouts long (my God, so long!) monologues about strange coincidences and her own aptitude. There doesn’t appear to be a hint of jealousy from her over Koyomi being together with Hitagi, but her actions later in the volume appear to say otherwise. The same can be said about Hitagi, although her pointing a pen near Suruga’s eye showcases a yandere-like means of thinking of her so-called beloved.

To be blunt, Koyomi lives in a strange world in Bakemonogatari. While it appears normal to the untrained eye, the fact that he’s been dealing with these aberrations one after another shows that this planet may be going to Hell in a hand basket. Koyomi may have a bit of a scummy side to him, but he’s at least offering a helping hand to anyone who seems to be in a dire situation. Perhaps this is why he goes with the flow, as a means to atone for his perverted ways.

It’s the back-and-forth between Koyomi and whoever has his attention that makes Nisioisin’s work so well-received. These are deep, intelligent conversations, shaped in a way that makes even the simplest of folk understand the situation. Yes, it can go on for a bit too long at times, but that somewhat part of both the original author’s appeal and style of comedy. There’s no way in hell that any normal high school kid would have the discussions that Suruga or Hitagi spout, but then again, this is in no means a normal story.

This brings me back to Oh!Great’s task of adapting the original light novels to manga form. I have never seen such gorgeous detail placed in any other series. While artists like BOICHI (Dr. STONE) or Aki Irie (Go With the Clouds, North-By-Northwest) have their own means of demonstrating beauty, Oh!Great overshadows them by blending fantasy elements with realistic details & textures. The fight between Koyomi and Suruga places so much focus on keeping things looking as beautiful as they are frightening, from Suruga’s clenched fist to even the shards of glass from the bottles Koyomi breaks. (Honestly, art schools need to teach some of Oh!Great’s techniques, even just from this specific scene!)

As it enters a brand-new mystery, the fourth volume of Bakemonogatari dazzles both from a mental and visual perspective. It can get confusing at times, but the fun comes from our protagonist’s blunt-yet-honest reactions to the situations around him. You might find yourself scratching your head at times, but the amount of sheer entertainment that this story has delivered thus far will leave anyone gobsmacked!