HomeTVGAME REVIEW | Spongebob Is "Rehydrated", And It Feels So Good

GAME REVIEW | Spongebob Is "Rehydrated", And It Feels So Good 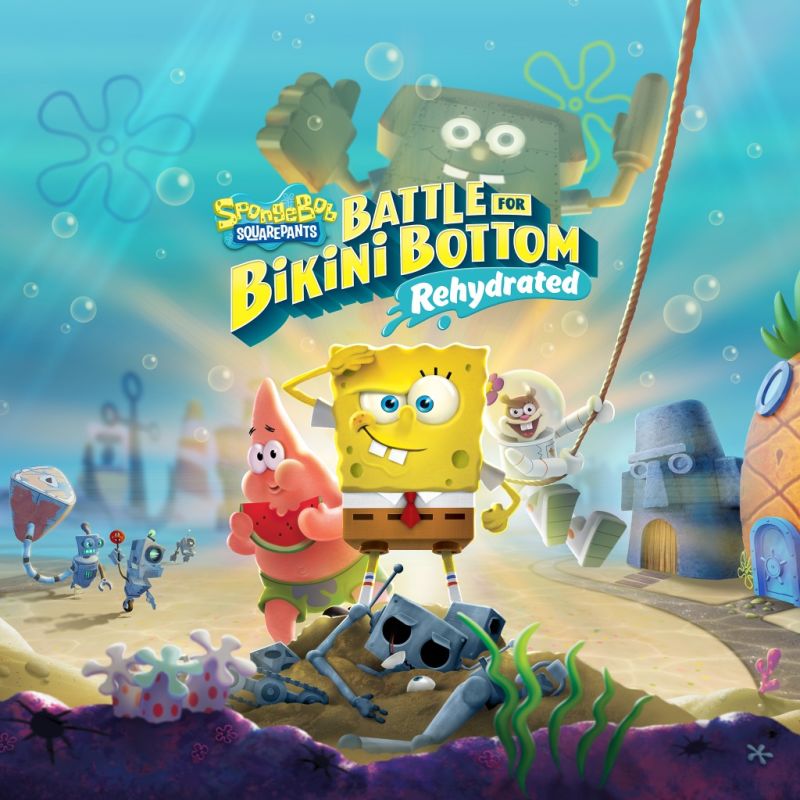 GAME REVIEW | Spongebob Is "Rehydrated", And It Feels So Good

I have fond memories of renting Spongebob Squarepants: Battle for Bikini Bottom from my local Blockbuster Video. Not only did it contain the comedy that has made the Nickelodeon series iconic, but it also showcased many strengths of a great 3D platformer. Many agreed, with fans proclaiming it the best Spongebob game ever made. With remakes and remasters of classics being very prevalent these last couple of years, THQ Nordic Rightfully decided that Battle for Bikini Battle was ripe for a similar return.

Developed by Purple Lamp Studios, the Rehydrated edition of Spongebob Squarepants: Battle for Bikini Battle gives the classic a large facelift. With improved visuals in tow, the game follows the Krusty Krab fry cook as he attempts to save Bikini Bottom from a foray of robots. He blames himself for the mechanical nuisances, not knowing that Plankton is truly the one responsible, so he takes full responsibility of the situation. With some aid from Patrick, Sandy, and a reluctant Squidward, Spongebob must collect golden spatulas and defeat any strange bots that stand in his way. 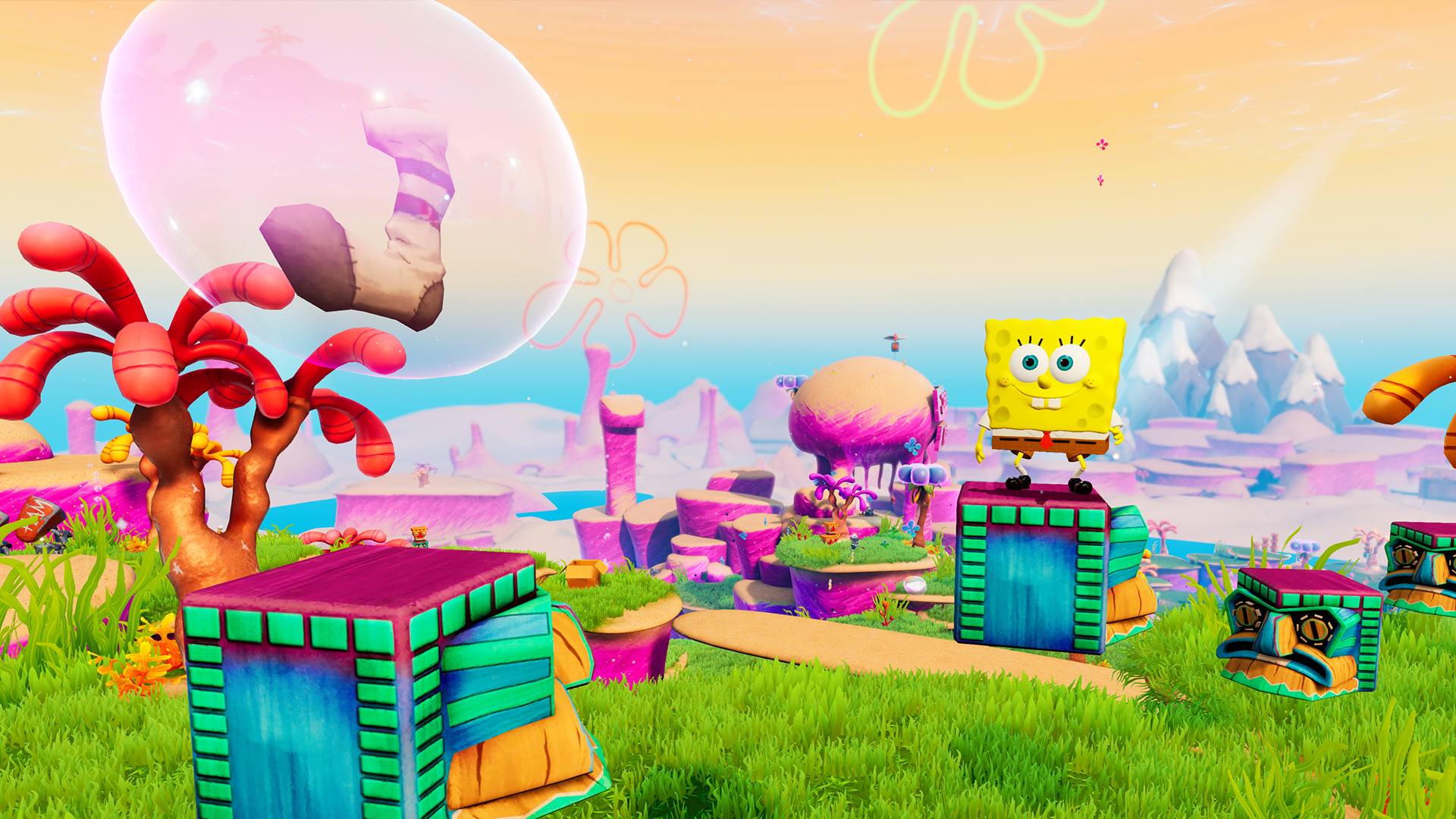 The gameplay in Battle for Bikini Bottom hasn’t aged like fine wine, but it also hasn’t rotted like a bad banana. It’s a weird sensation, where traversing through the levels is a lot of fun, but it doesn’t feel like a brand-new experience. Trapped in a time warp of sorts, the remake feels exactly like playing the original from 17 years ago. Despite how this may sound, this is actually a good thing!

While some may roll their eyes that this remake of an old game plays exactly like the original, I personally loved diving back into this Spongebob game and feeling like I haven’t missed a beat. I haven’t played this game in a very, very long time, and yet my fingers felt like it knew exactly what it needed to do to play right at the get-go. Although I don’t know how newcomers will feel about Battle for Bikini Bottom, people who have played it back in the day will more than likely find it a smooth experience. Some may call it lazy; I call it keeping to tradition. 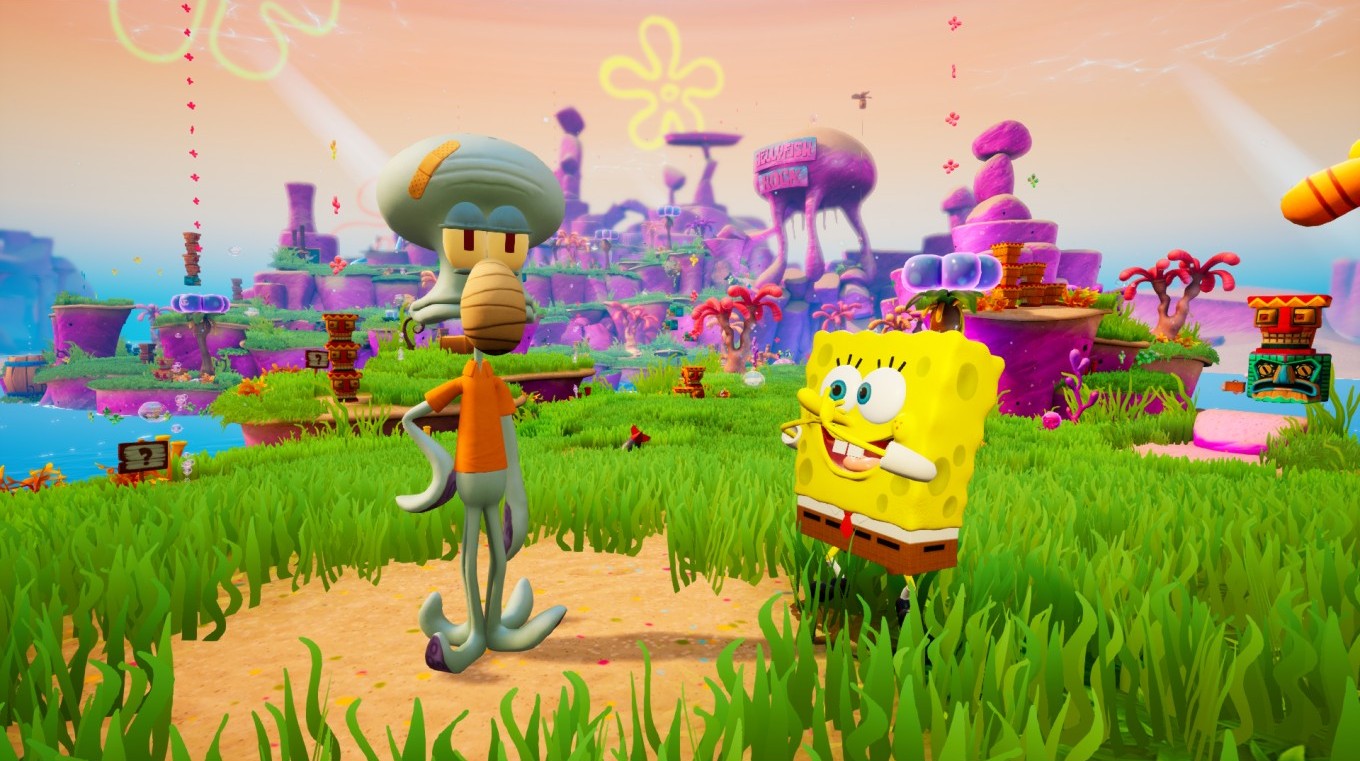 One thing about Battle for Bikini Bottom that has aged great is its sense of humor. I’ve forgotten how hilarious the banter Spongebob has with Patrick, Mrs. Puff, and Squidward, with the mixture of wacky and deadpan jokes hitting hard almost every time. Some gags may raise an eyebrow or two, but that’s part of the silly charm of Spongebob, where kid-friendly gags can cross the line to make adults laugh just as hard. However, one complaint comes in the form of the voice casting, where — for some reason — Clancy Brown still doesn’t voice Mr. Krabs. (Joe Whyte does a decent job, but it’s noticeably different from the legit thing.)

Collecting golden spatulas, Patrick’s socks, and Shiny Objects can be just as fun and challenging as in the past. Beating up robots, solving puzzles, and learning new tricks adds new solutions and exciting mechanics that keeps the kooky good times going throughout its runtime. But the real fun comes in the form of the boss battles, where Spongebob & the gang face off against robot monstrosity versions of their own selves. The mixture of good controls and silly banter make these moments the shining beacon of this remake. 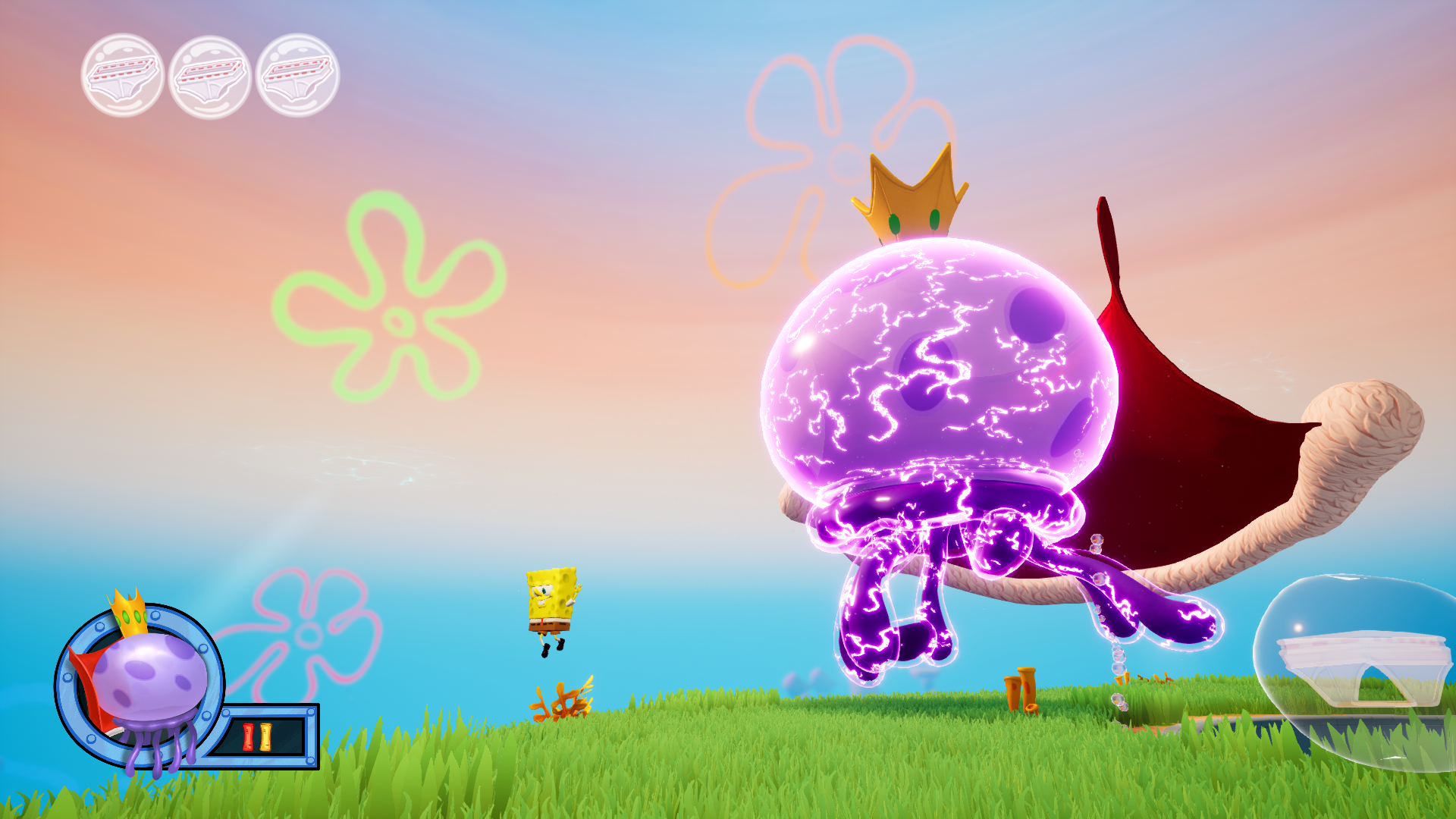 Despite the good times the game offers, Battle for Bikini Bottom isn’t a perfect remake. There are some weird rendering issues that appear in certain cutscenes, where the ground will suddenly lift from the bottom and cover half of the screen. Voice syncs can also be off, where the mouth flaps can be off by a second. Perhaps the worst thing is the loading screens, which can take roughly 20-30 seconds for the next area to load. (This also happens when you die, which makes waiting through the load screen a major buzz kill.)

New to Battle for Bikini Bottom is a multiplayer mode, where players can find endless hoards of robots. It’s fun at first, but it gets old very fast. There’s also the lack of servers currently as of this writing, which could lead to finding an online game taking hours to seek. (Considering it’s not a good addition, maybe that’s a good thing it’s not that popular.)