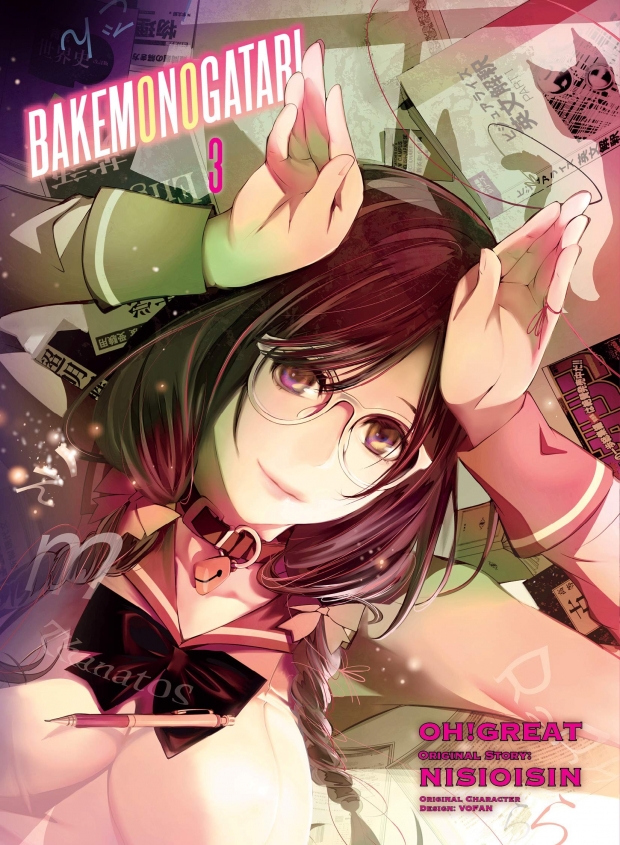 It can be very impressive seeing the deep philosophical takes Nisioisin fits into his narratives, especially in his Monogatari franchise. He can take a scenario that’s so out there and confusing, and then — with a mere clap of his hands — find a way to make sense of it all. In Oh!Great’s third volume of the Bakemonogatari manga adaptation, this is demonstrated greatly via the conclusion of Mayoi Hachikuji’s storyline.

Still waiting on Hitagi to return to the park, Koyomi and Mayoi talk about their statuses in their current life. But when Oshino-san calls in to aid with Mayoi’s journey to her mother’s, the full truth and situation of her aberration comes to fruition. What follows is a dark and earth-shattering realization of Mayoi’s situation, one that is far more tragic than readers were initially led to believe. Still, Koyomi itches to find a way to save Mayoi and get her back to her mother’s.

At first, this volume of Bakemonogatari feels like it’s wasting one’s time with the core beliefs of our main characters. The banter between Koyomi and Mayoi can be humorous, but some topics discussed do lead towards the uncomfortable. While I do get it’s for a laugh, it’s not exactly framed in the best way possible. But when Hitagi returns with the true realization of what’s going on, the tone changes greatly.

This results in a heart-aching back story about Mayoi, who feared that her mother would forget what she looks like. A family torn apart, the young girl summons the courage to make her journey to her mom’s place. It’s the end of the back story where the truth comes to light, and gives reason to why Hitagi couldn’t see Mayoi initially in the second volume (or at all, for that matter). But even when all is put in front of the world to see, Koyomi aims to set things right, despite the never-ending journey it had become.

It’s during these moments in Bakemonogatari when the intelligence is at its highest. The deep conversations about life, purpose, love, and even death are placed in such a fine way that it would even make the likes of Franz Kafka smile with approval. These deep understandings of how humanity works is shown greatly via Oshino’s advice, Hitagi’s heart, and Koyomi’s determination. Together, it’s all meshed into an eye-opening realization of how one can do better for both themselves and those they care most about.

Oh!Great’s visual style reaches some stupendous peaks, as it can go from the photorealistic to Showa-era gag-like in a blink of an eye. The way the characters emote also demonstrates the immense talent the Air Gear creator has in his art form. When he wants Mayoi to look wacky, she becomes visually cartoonish; when he wants her to look crushed and saddened, he’s able to make you feel for her situation just by the way he draws her eyes. I’m not sure how long it takes him to draw a single page, but the work he puts into it has made Oh!Great one of the best artists in the history of manga.

The third volume of the Bakemonogatari manga adaptation has a couple of bumps in its narrative road, but its end destination was a satisfying one. With a new character lurking in the shadows and Koyomi & Hitagi’s relationship intertwining tighter, the strange tale of aberrations influencing human life is shaping to be one of the most memorable reading experiences around. Whatever happens next is up to anyone’s guess (unless, of course, you’ve already read the light novels), but one thing is certain: it’s going to get weird, and it’s going to get good.