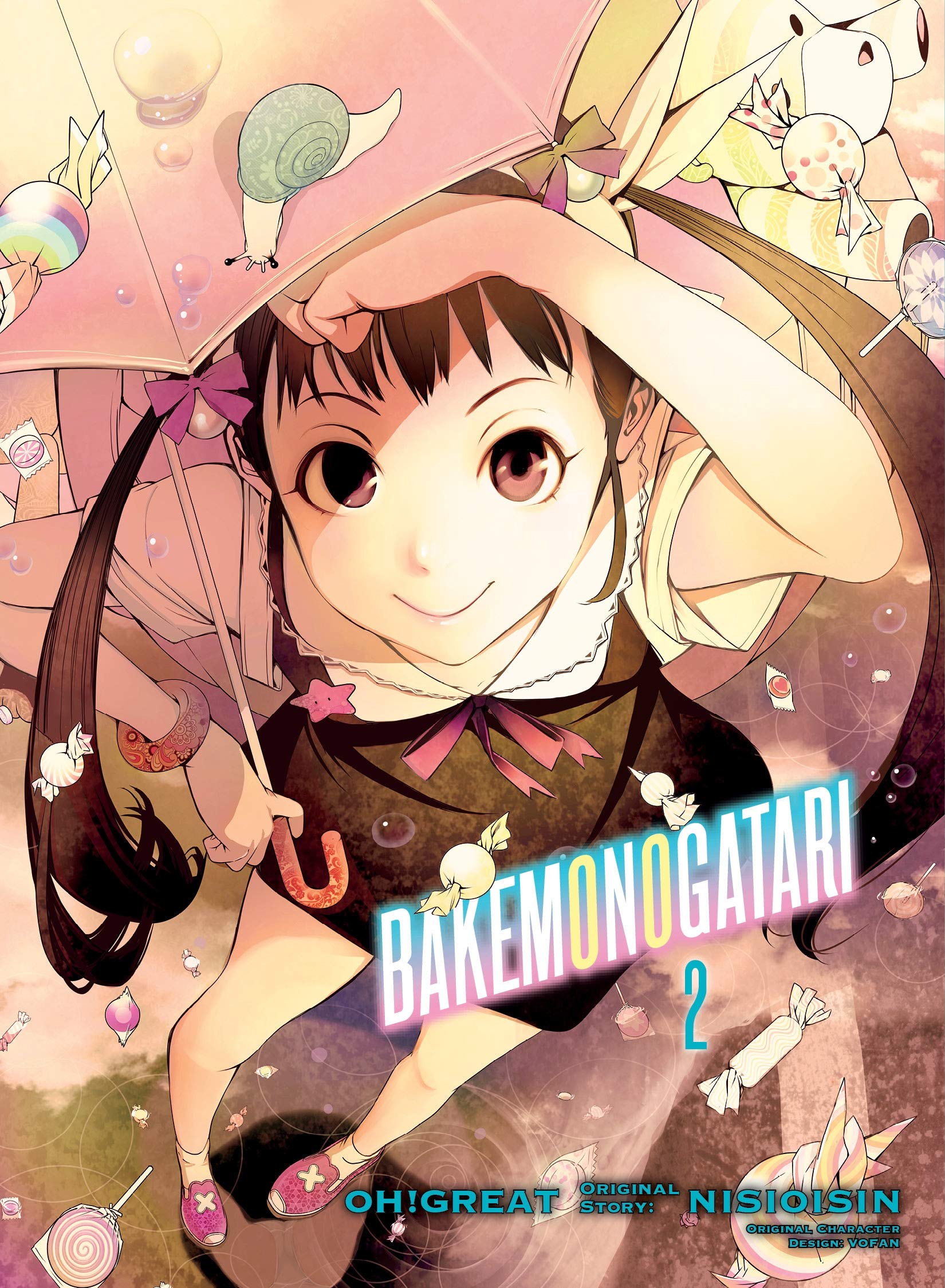 Nisioisin has one of the strangest imaginations I’ve ever come across. At times, his works can make a lick of sense, going completely off-the-rails with its concepts and deviant trails of thought. But it’s these whacked-out scenarios that have made his works a staple in the light novel, manga, and anime communities, especially with his Monogatari franchise. With the aid of Air Gear creator Oh!Great, the first novel in the series Bakemonogatari has been brought to a new visual life in manga form. Its first volume was insane; the second one, for lack of a better phrase, should be committed to a rubber room.

After saving the weightless girl Hitagi from a crab aberration, Koyomi finds himself pondering what to do next with his life. While having a post-reflection of their events in the park, he and Hitagi find a young girl named Hachikuji looking for a certain address. The two decide to help her, despite some hesitation from Hitagi due to her disliking children. But as the two search for the place, they find that they can’t reach the destination due to Hachikuji having an aberration of her own to deal with.

Like in the previous volume, the manga’s story shines through the banter between the characters. Hitagi tries to pull the inner pervert out of Koyomi at any given time, attempting to ruin his name and tarnish his reputation for the sake of satisfying her funny bone. Add in Hachikuji into the mix, and you’ve got something of a trifecta of hilarious jabs and crazed lunacy that’ll put a smile on anyone’s face. (The pedophile jokes are somewhat cringe, feeling more gross than funny.)

But when it's time to focus on deeper elements, that's when Bakemonogatari's sanity exits through the back door. The concept of aberrations plays heavily throughout the story's themes, to the point where you can't make heads or tails of certain back stories. There are times when the manga references other tales from within the Monogatari franchise, some of which will be a mystery to those that may have never checked out this series before. Nevertheless, even if it winds up being confusing, this manga adaptation of Nisioisin's work still finds ways to be hugely entertaining!

Oh!Great’s art style is some of the manga industry’s best, and his treatment of VOFAN's original character designs and illustrations will make anyone’s eyes pop out of their sockets. How a snail is designed, the detail placed in nearby flowers, and the batty stumps on a limbless vampire are presented with amazing pinpoint details that reach far above most modern-day works of art. It’s when something action-packed comes around when the drawings reach out and hold still its audience, even if it’s an interpretation of a high schooler beating up a sixth grader that’s biting him like a rabid wolverine.

Bakemonogatari is a story that’s hard to truly describe with words; it must be seen to believe. I get that saying such a phrase is clichéd as hell, but in the case of what Nisioisin and Oh!Great have conjured up here, it’s one of the very few times those words can be used properly. It’s funny, shocking, gorgeous, and — above all — an absolute delight to lose one’s mind over. If you’ve never dived into the Monogatari series before, then this manga adaptation of Bakemonogatari thus far has proven to be a great starting point!