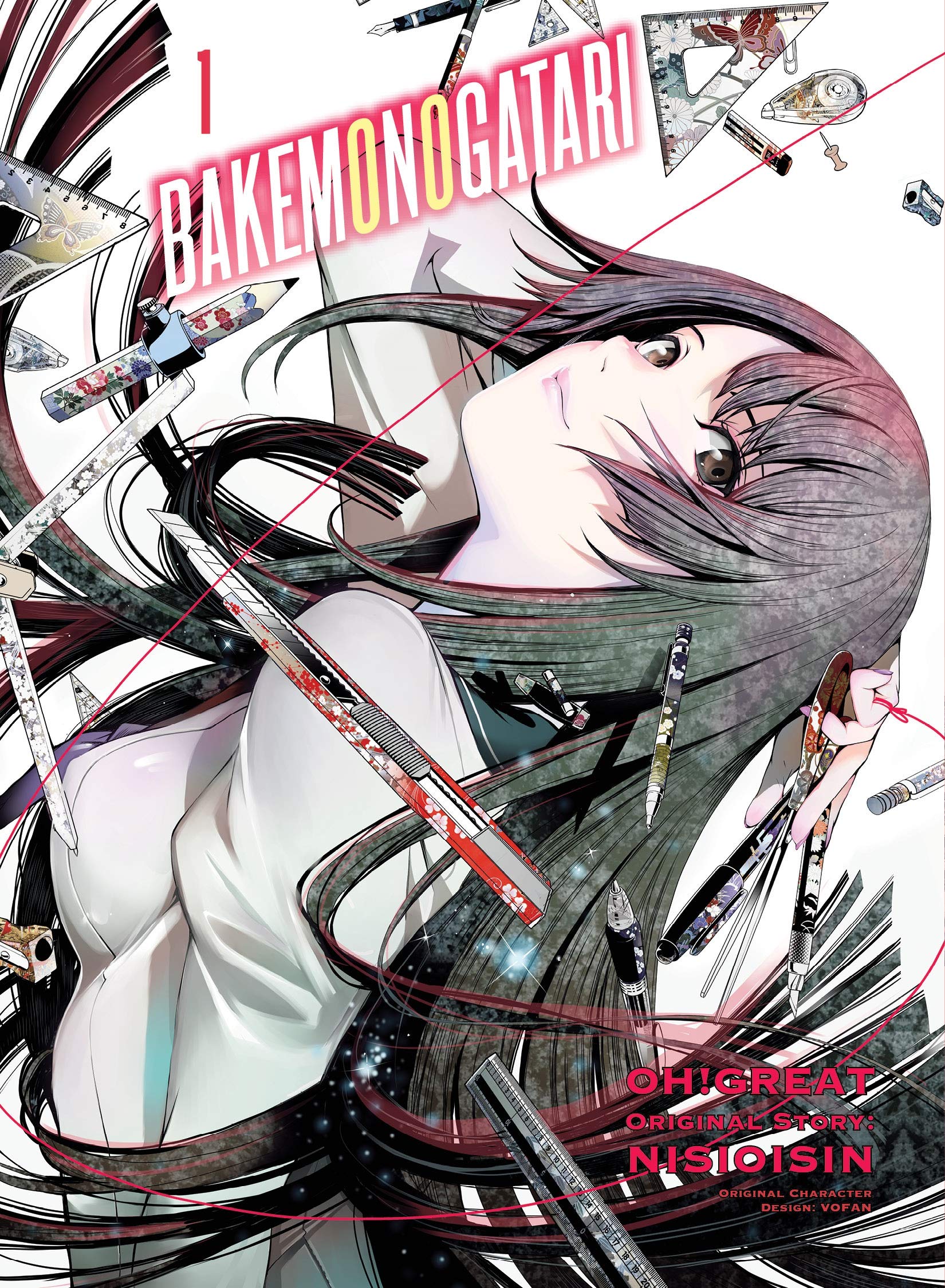 If one wants to experience a roller coaster ride of storytelling, then look no further than NISIOISIN’s Monogatari series. Filled with darkness, humor, lovable & unlikable characters, and some brain-bashing plot twists, the original light novel series is one that’s incredibly difficult to describe in a matter of a few words. While it has had a plethora of manga adaptations, the novel that started it all hadn’t graced the comics format. Perhaps NISIOISIN was waiting for the right person to come along to draw Bakemonogatari, or — rather — an Oh!great (Air Gear) one.

It should be pointed out that in the beginning of Bakemonogatari, nothing’s quite explained in full. You’re first introduced to two high schoolers named Koyomi and Hitagi, with the latter being somewhat hostile to the former. Okay, perhaps “somewhat” isn’t the best word to use, as she’s armed to the teeth with sharp pointy objects that would leave many a scar on anyone’s body. Both students have their share of secrets, with Hitagi somehow weighing nearly nothing at all and Koyomi a victim of a vampire attack.

What starts as a quick-witted back-and-forth banter soon transforms into a dark tale into Hitagi’s back story. A parent falling for a cult’s tricks, a daughter almost raped by its leader, and the rug pulled under all of them when their lives are stolen away due to Hitagi’s courageous defense against the leader are all spread out during a special sermon watched over by their ally Oshino. All of it tied together to Hitagi’s curse, which has been brought upon her by the spirit of a crab. Needless to say, how this story begins isn’t exactly the same as its first volume concludes.

One thing that I’m surprised with Bakemonogatari is how it manages to keep everything under wraps and at a somewhat sane level. Despite a lot of the kookiness that this story delivers even within its first chapter, its tone is well-grounded to the point where one has to wonder how any of these characters are grasping the reality that they’re in. The sight of Koyomi dealing with the sharp pointy things that Hitagi shoves into his mouth would make any rational person flip out; here, while the threat is in Koyomi’s eyes, he deals with the situation quite calmly. Only in the over-the-top banters do we see these two reaching comically-timed moments of tension.

All of this is captured beautifully by Oh!great’s artwork. The creator of Tenjho Tenge has the knack of crafting amazing-looking characters and expressions within his own works, so seeing his talents to bring original designer VOFAN’s works to the manga realm are never wasted. It’s in the first volume’s climax when Oh!great’s skills are brought to the forefront, with the wanton spiritual destruction and crab-causing chaos popping out with gorgeous detail. While the answer may be because of his busy schedule, it makes me wonder why his talents weren’t used when the other Monogatari manga adaptations were being created.

Bakemonogatari is all over the place with its narrative, with its strangeness reaching peak bonkers levels. But it knows how to grab its readers, especially with a talented artist like Oh!great at the helm. Last time I felt this pulled in to a nonsensical world of out-of-control shenanigans was when Douglas Adams first brought Dirk Gently to life. Like the holistic detective’s adventures, Bakemonogatari’s first manga volume has me uttering the phrase, “I have no idea what the hell’s going on, but I wanna see what happens next!”