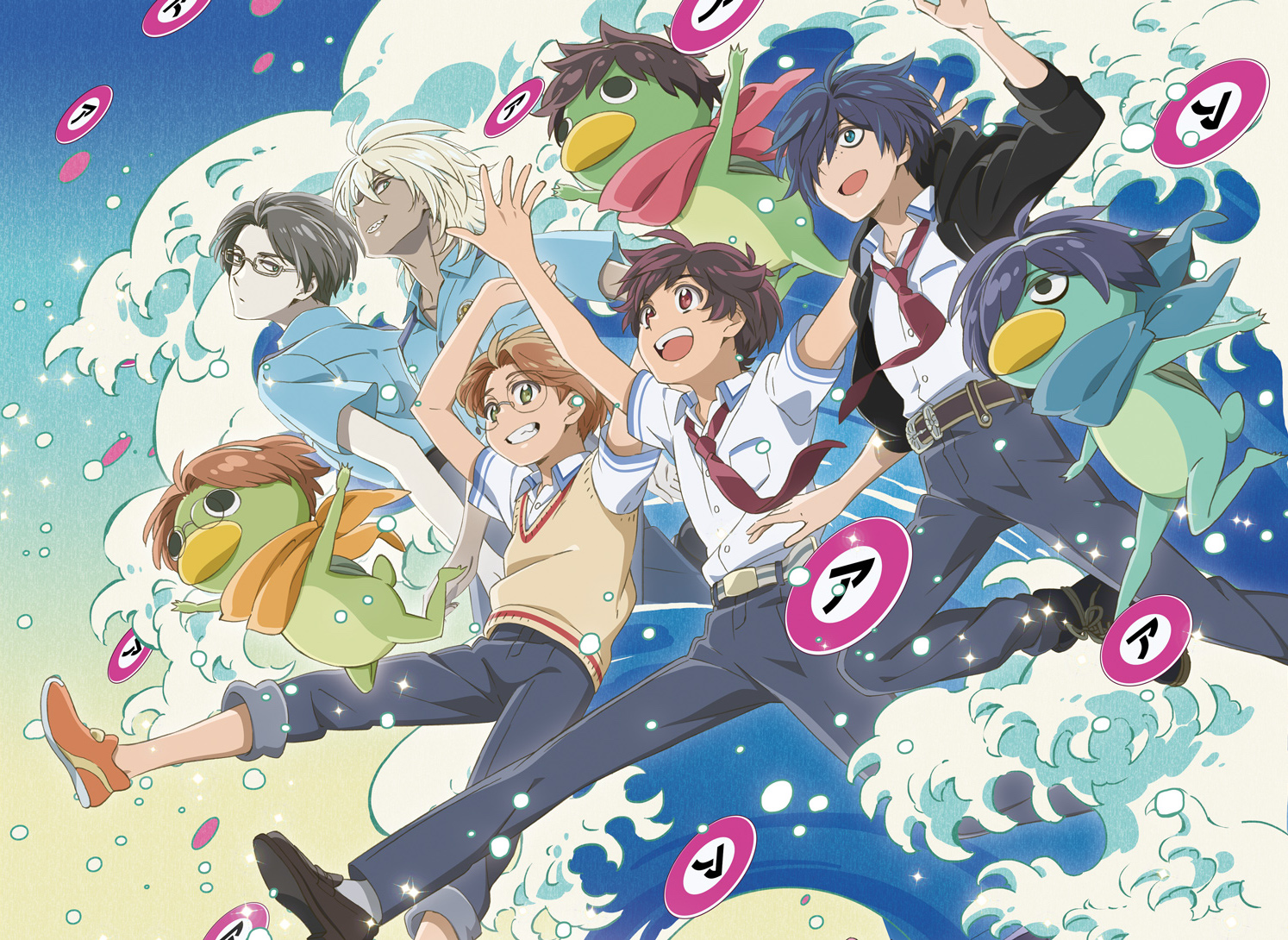 Kunihiko Ikuhara is a name that’s always associated with insane concepts meshed with deep meaning. Whether it’s bringing to the screen the best couple in Sailor Moon, teaching about love & acceptance in Yurikuma Akashi, or dishing out some epic battles for the heart in Revolutionary Girl Utena, Ikuhara delivers with a heart that’s as wholesome as it is bizarre. This is hugely evident in his latest work: Sarazanmai! Once again, the crazy weighs equally with the deeper meaning it slowly reveals.

Sarazanmai isn’t the easiest anime to describe. Taking place in Asakusa, the series focuses on three middle school students with a connection to one another. After accidentally breaking a kappa statue, Kazuki (Ayumu Murase/Alejandro Saab) and Toi (Kōki Uchiyama/Ricco Fajardo) find themselves aiding the kappa prince Keppi (Junichi Suwabe/Tyler Walker) to collecting Dishes of Hope. Wrapping their friend Enta (Shun Horie/Justin Briner) into it, the three are turned into kappas each time a zombie appears. However, the more they collect, the more secrets they find out about one another. 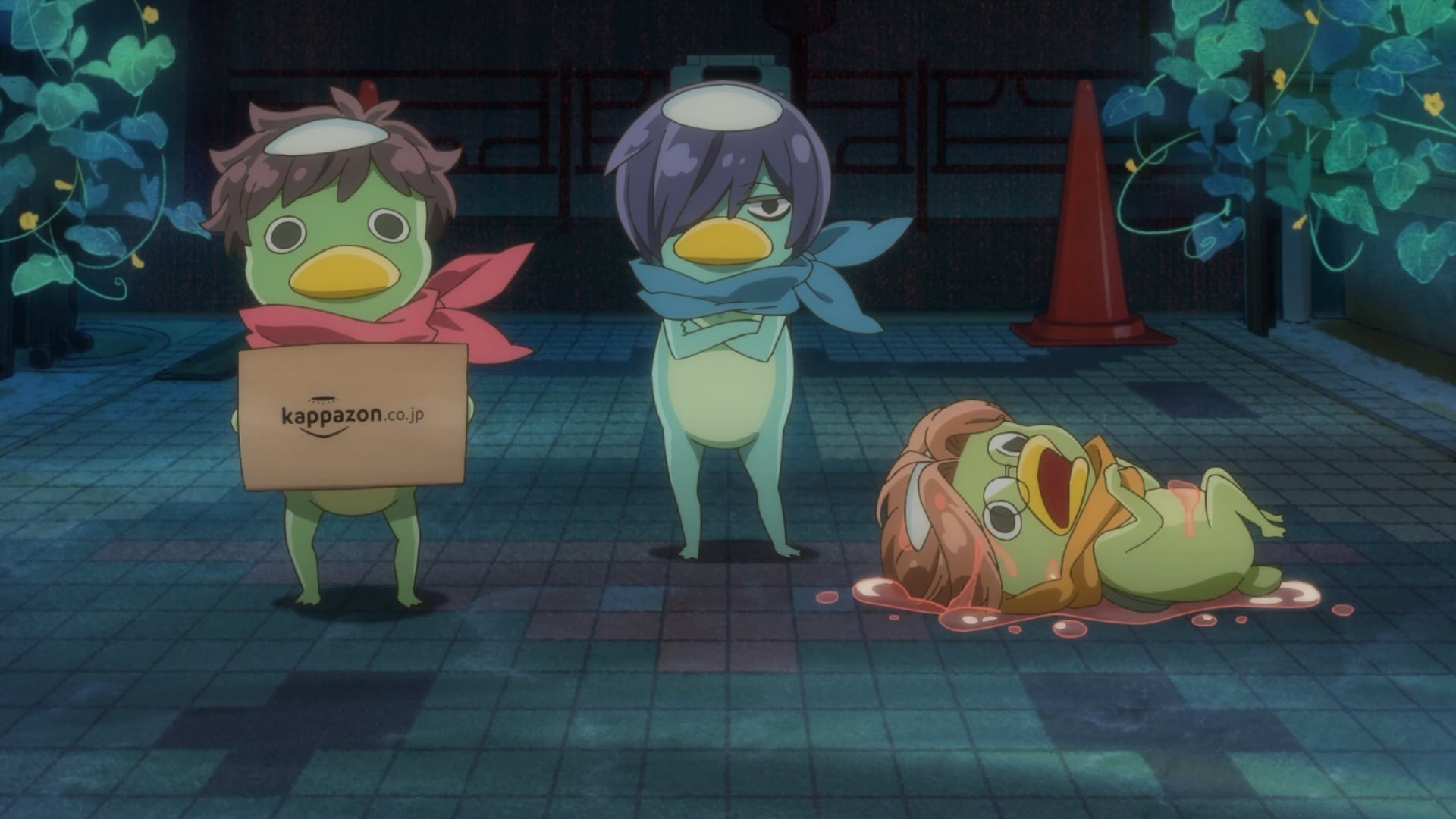 At first, Sarazanmai goes overboard with the insanity. From images of the kappa trio pulling a shirikodoma out of the rectums of zombies to the overtly sexual tones of the dual cops Reo (Mamoru Miyano/Ian Sinclair) and Mabu (Yoshimasa Hosoya/Daman Mills), the wackiness is very much in the viewers face for a good chunk of this series’s introduction. Of course, all of this is presented with a foxy grin and a hearty laugh, especially when it comes to the antics of the gassy Keppi and the TV idol Sara Azuma (Teiko Kagohara/Sarah Wiedenheft). However, beneath these zany antics is a dark, sad story about isolation.

The trio of Kazuki, Enta, and Toi often find themselves dealing with their own personal demons. Kazuki often cross-dresses as Sara to bond with his young disabled brother Haruka (Rie Kugimiya/Alison Viktorin), as he attempts to atone for his accident. Toi attempts to keep his older brother Chikai (Kenjiro Tsuda/Chad Halbrook) safe, despite his deep ties to organized crimes. Meanwhile, Enta aims to get Kazuki back into playing soccer, as well as convey his feelings of love to his former teammate. Keeping these desires hidden, not only do they wall themselves from their loved ones, but also each other. 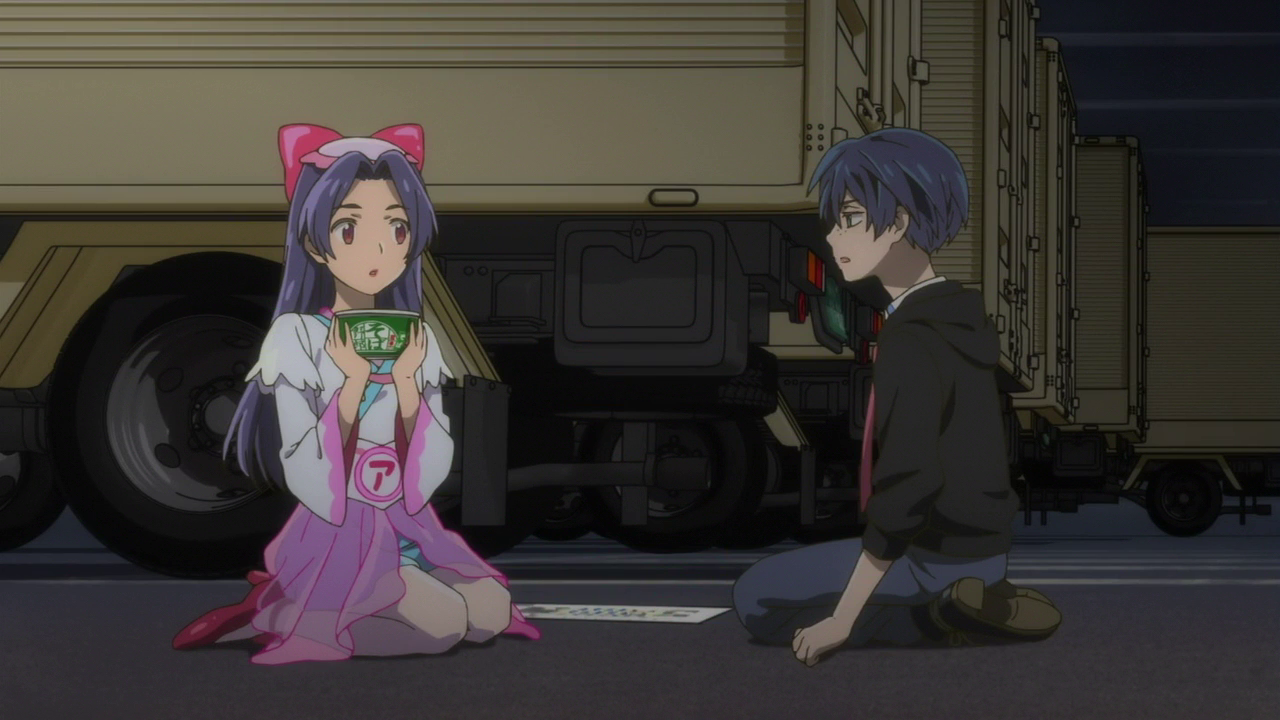 Granted, there are some elements that aren’t fully explained. Despite them being seen as the so-called enemy of the series, you don’t get a full understanding of what the otters represent. Not even when they go up against the kappas, their reason behind their wickedness isn’t exactly clear. Rather, it winds up being something else entirely different that becomes the biggest threats to the friends, Keppi, and Sara. With that being said, their relationship with the crooked cops Reo and Mabu gives way to their reasons for wanting to collect the dishes.

It’s hard to truly talk about Sarazanmai without spoiling some of its bigger reveals. Let’s just say that — despite its bright presentation — things can get grim. The show’s dark undertones play well with the separations and delusions that Toi, Enta, and Kazuki deal with. But when it delivers with a big reveal, it does so via a massive gut punch that you won’t see coming. Thankfully, the darkest parts of this anime are cushioned by its funny bone, with its lessons delivered with a smile. 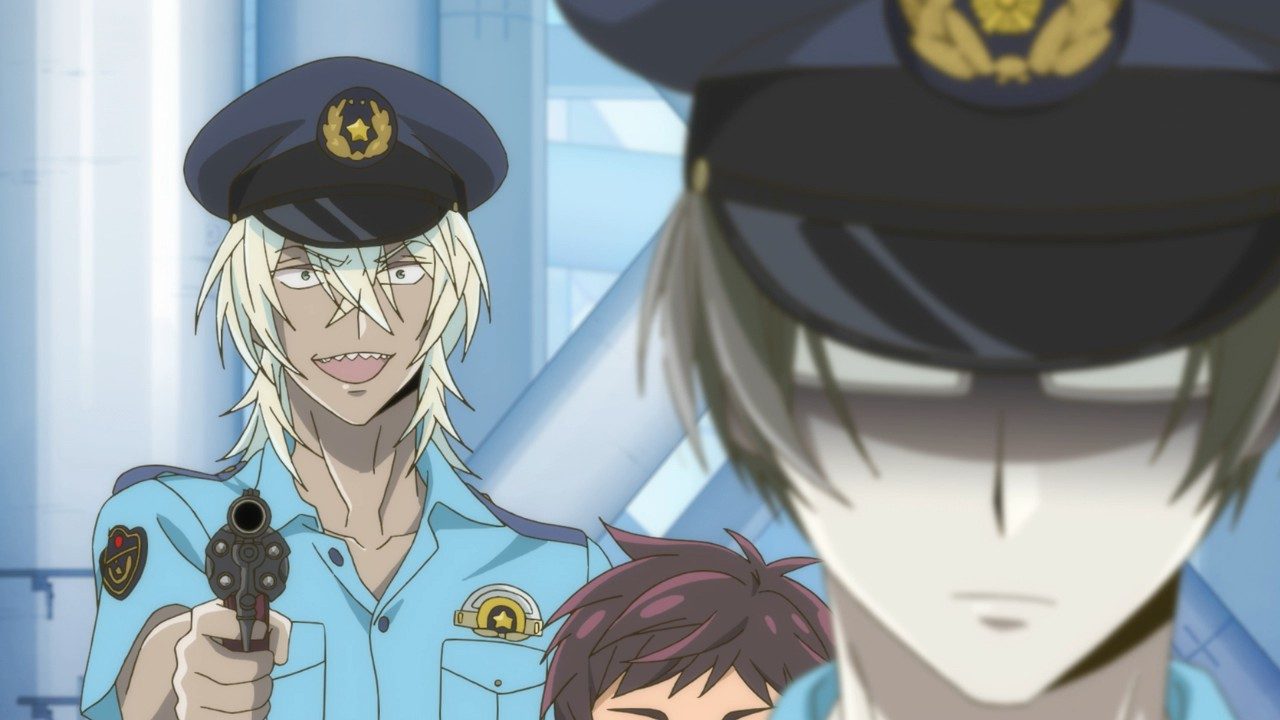 All of this is presented via some of this year’s most gorgeous visuals in anime this season. Studios MAPPA (Zombie Land Saga, Ushio & Tora) and Lapin Track (Endride) bring together a plethora of shiny imagery in every scene. From the song & dance battle sequences and the homages to various other anime and films, everything is brought to life with such care and devotion. Even the way Asakusa is presented is filled with such deep detail, with almost every part of that area being identical to the real place.

Both the Japanese and English dubs of Sarazanmai deliver with much soul in everyone’s performances. From Murase & Saab’s relatable Kazuki and Uchiyama & Fajardo’s dark-sided Toi to Horie & Briner’s selfishly understandable Enta, each voice actor gives an outstanding portrayal to their respective characters. However, the insert songs do suffer somewhat in the English dub, as the lyrical beat feels a bit off compared to the original Japanese version. It’s not bad per se, but it sounds a tiny awkward. 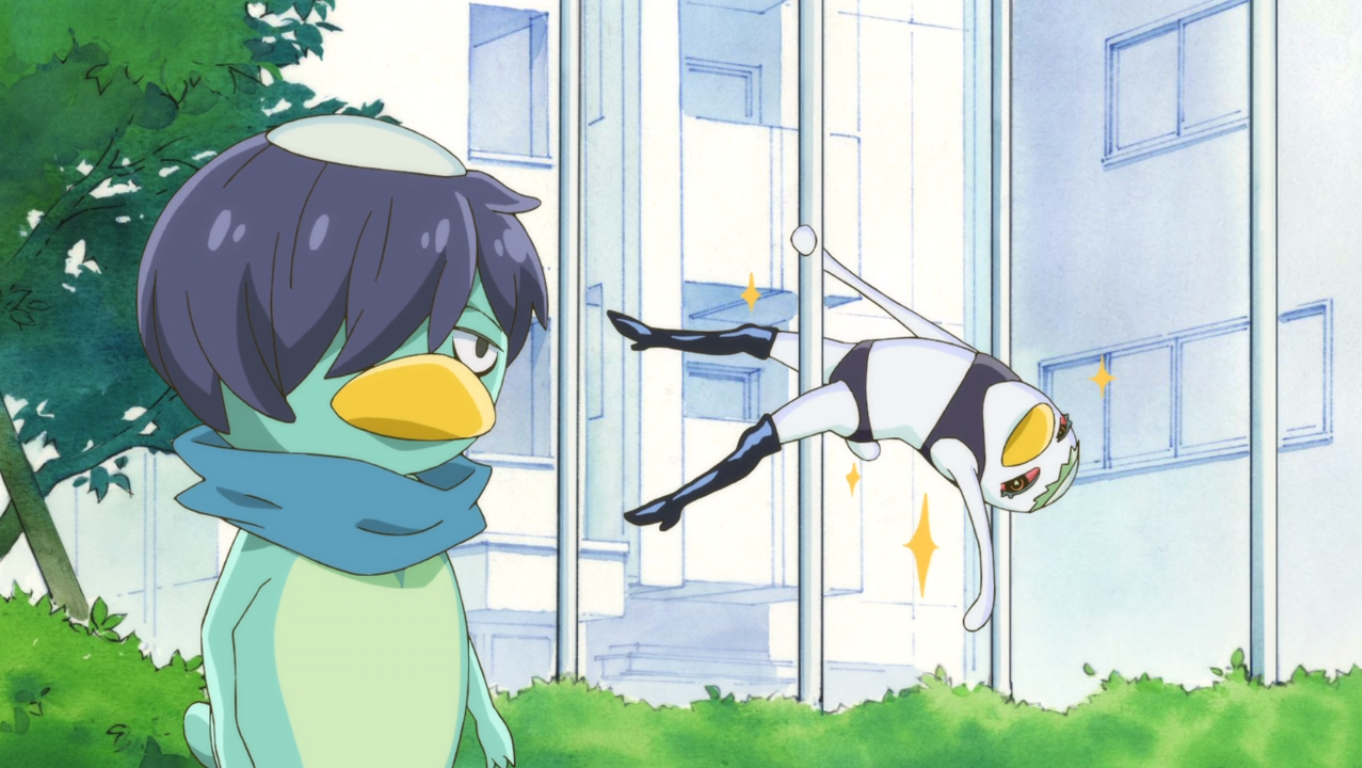 Composer Yukari Hashimoto (Monthly Girls’ Nozaki-kun, Toradora!) pens a soundtrack that knows how to pop. Insert songs “Kawausoiya” by Miyano & Hosoya and “Sarazanmai no Uta” by the main cast are catchy as hell, acting as ear worms that’ll stick with you for days. Interesting about the opening and ending themes is that it’s reuniting the original performers of the Boruto: Naruto Next Generations themes, with KANA-BOON’s “Massara” and the peggies’ “Stand By Me” delivering strong melodies with lyrics that fit perfectly with the anime’s deeper messages.

It may take some time to show its true heart, but Sarazanmai once again is a high mark on Ikuhara’s resumé. With its mixture of humor and heart, the tale of three kids finding a way to connect shines as one of this season’s most thought-provoking anime. You won’t have to eat cucumbers or pull a shirikodoma out of a zombie’s bum to find what makes Sarazanmai’s heart beat as loudly & proudly as it does.