HomeAnimeANIME REVIEW | A Poetic Kind Of Rom-Com in "Senryu Girl"

ANIME REVIEW | A Poetic Kind Of Rom-Com in "Senryu Girl" 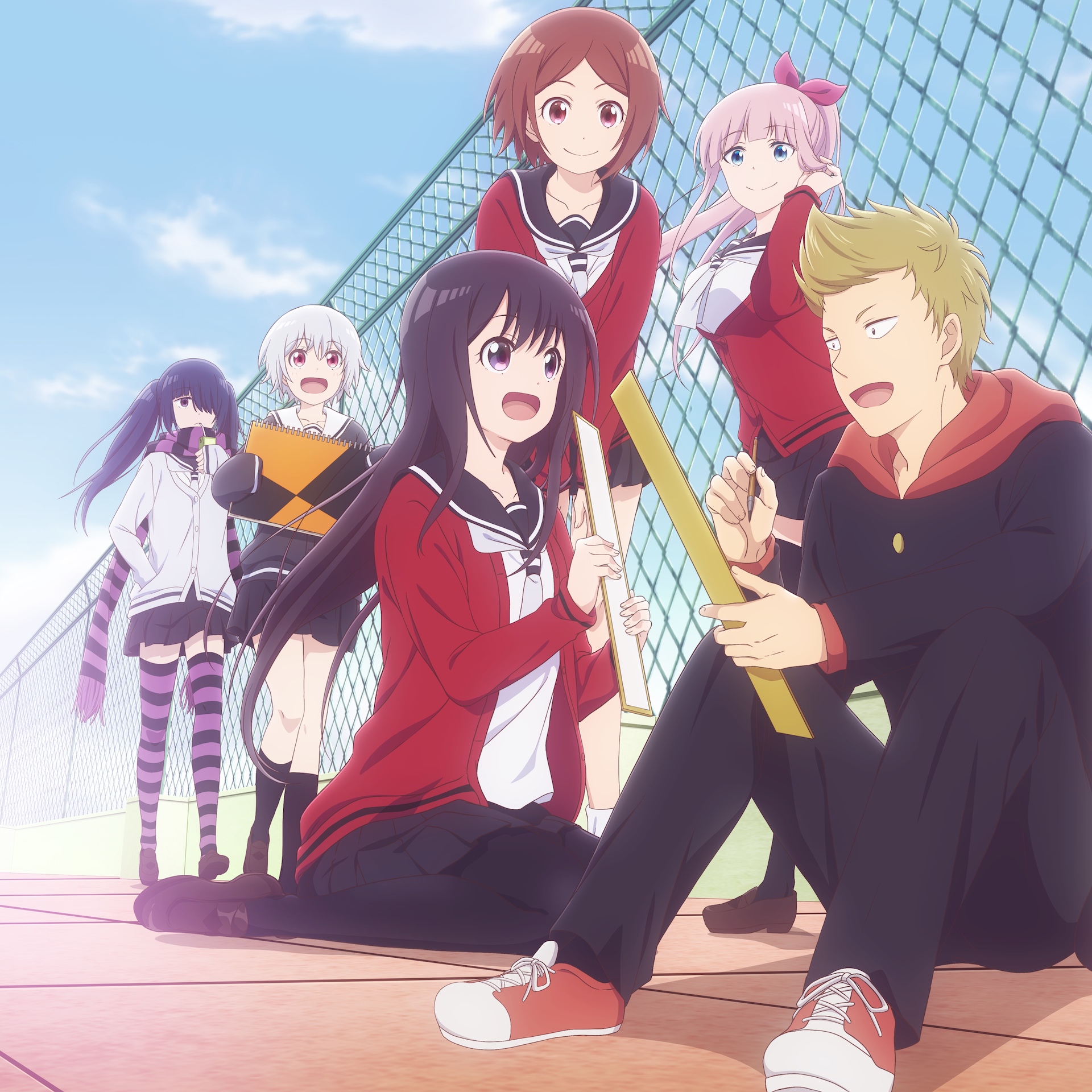 ANIME REVIEW | A Poetic Kind Of Rom-Com in "Senryu Girl"

There’s something about Senryu Girl that makes me smile throughout each episode’s runtime. I can’t explain why this grin of mine is plastered on my face, as it’s a romantic comedy with one somewhat strange premise. And yet, every time I watch it, I get a feeling like all the stress from my day has vanished, in a similar vein to what watching something from the iyashikei genre normally does.

Based on the manga by Masakuni Igarashi, Senryu Girl focuses on Nanako Yukishiro (Kana Hanazawa), a high school girl who has trouble with public speaking. Instead, she uses the poetry known as senryu to communicate with her friends and members of the Literature club. One of those friends is an ex-delinquent named Eiji Busujima (Tasuku Hatanaka), who is attempting to cast away his violent ways via learning to write poetry. As the story progresses, the bonds the two create seem to slowly blossom into love. 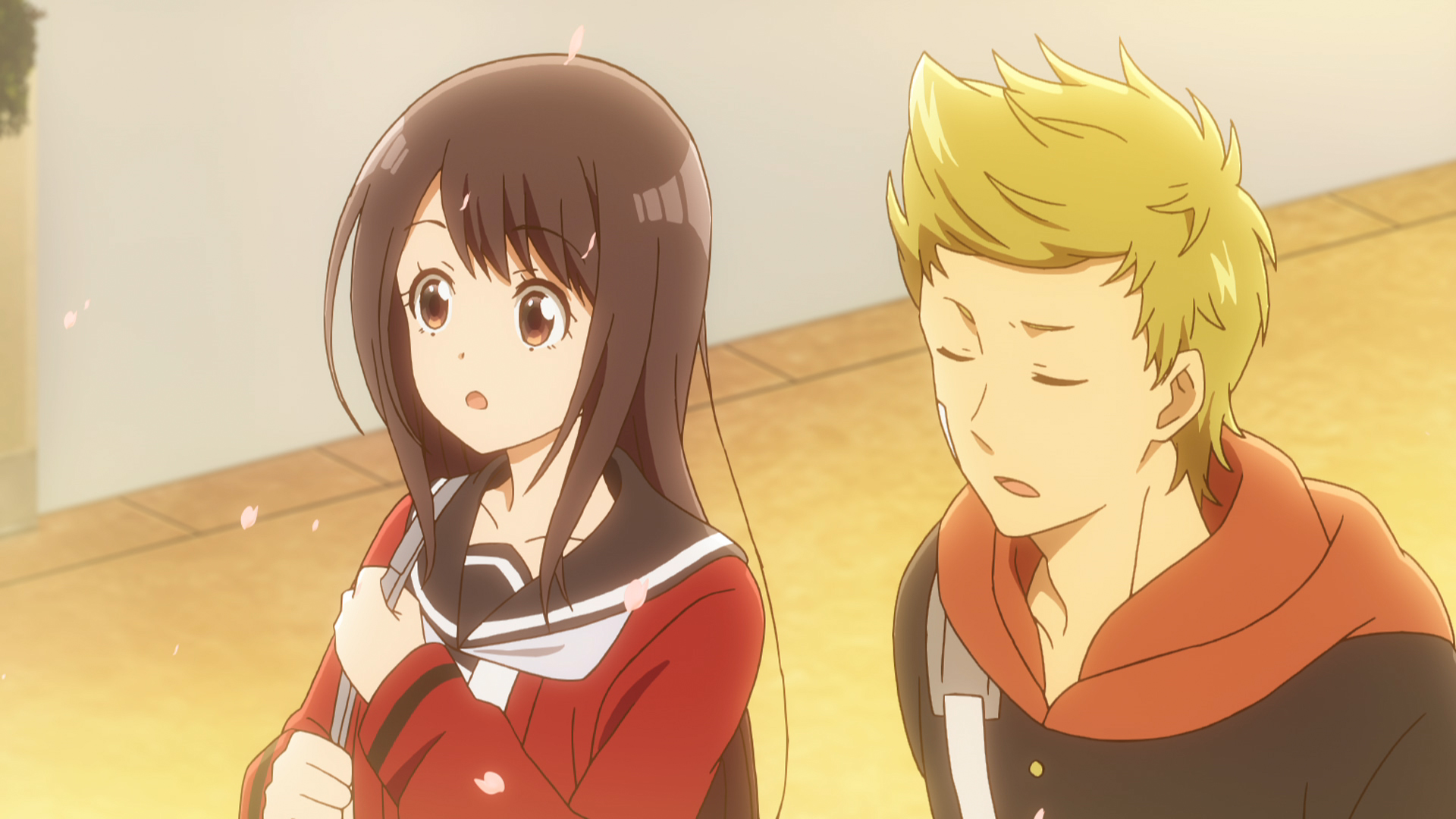 As a plot device goes, this anime does sound rather silly. The thought of having a girl communicate using poetry is somewhat out there, not to mention being able to come up with it on the fly like she does. But shockingly, Senryu Girl works wonderfully with both its story and characters. What makes it succeed is a great mixture of feel-good emotions and clever writing.

From the character perspective, this series does well with giving its viewers a whole load of likable traits for everyone. Although Eiji used to be the kind of person who’d beat someone up if they look at him wrong (which is showcased hilariously with his senryu about Spring), his newfound love for this kind of poetry has brought out a sweeter side that he never really know he had. It’s this aspect that finds Nanako seemingly falling in love with the former brute, with every kind action he does bringing forth quite possibly the best smile in anime this year. 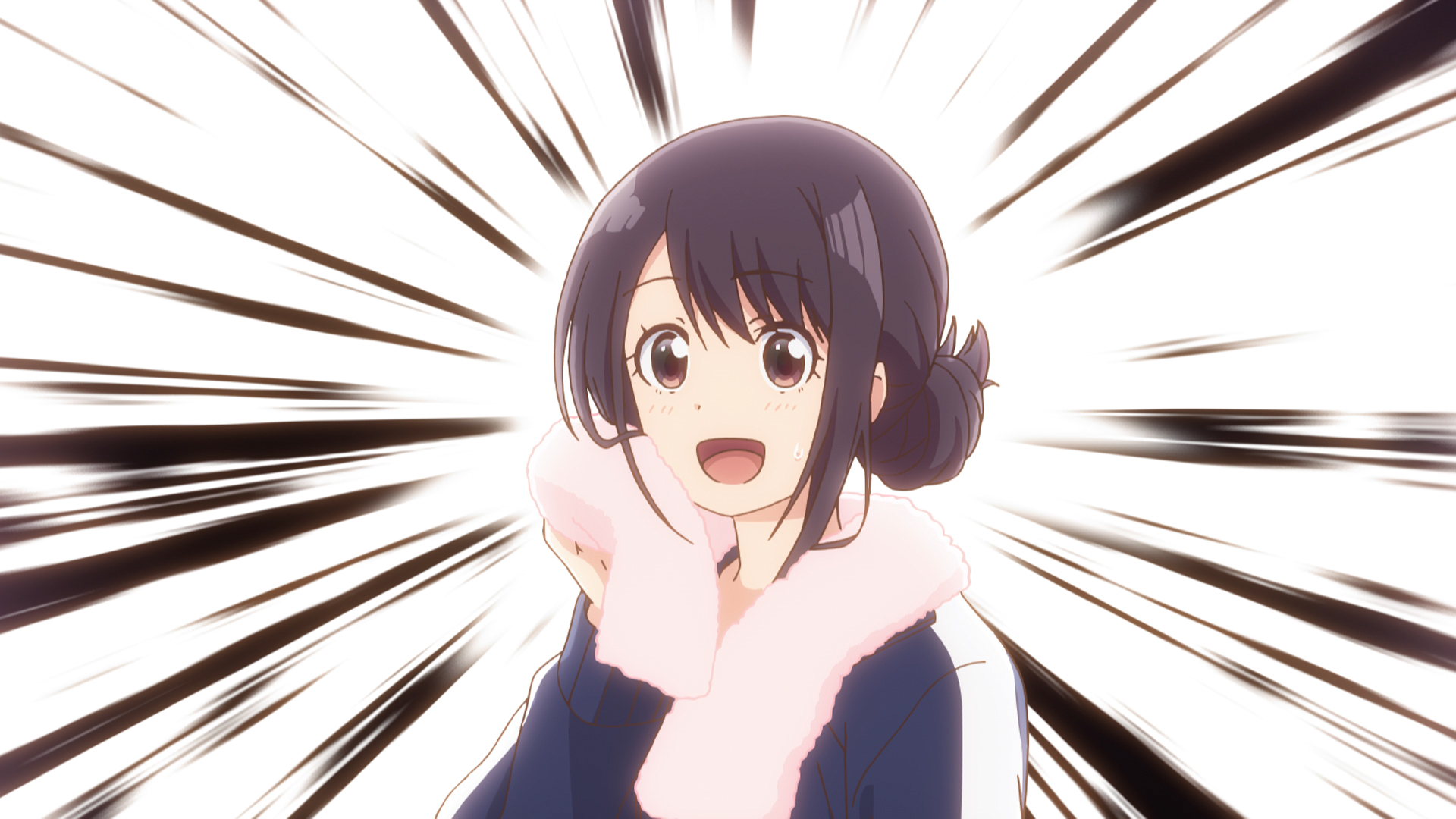 Nanako as a character has this sort of sweetness that you don’t often get with anime female protagonists these days. There’s no dark side to her mannerisms, nor is there something brewing deep inside that will make her personality turn ugly. She is purely good-natured, even when she acts flustered if seen in a bathing suit or having her love fortune told by her classmate. Perhaps this is why she is able to write senryu so quickly and efficiently, as Nanako can see all the beauty this world has to offer.

Of course, I can’t go on without talking about the character Kino Yakobe (Misaki Kuno). Like Nanako, she has trouble speaking, as she uses drawings to express herself. This often results in some silly presentations, ranging from making drum sounds while judging an art contest to even delivering full-fledged monologues in picture form. It’s quite the nonsensical means of communicating, but it’s nonetheless creative! 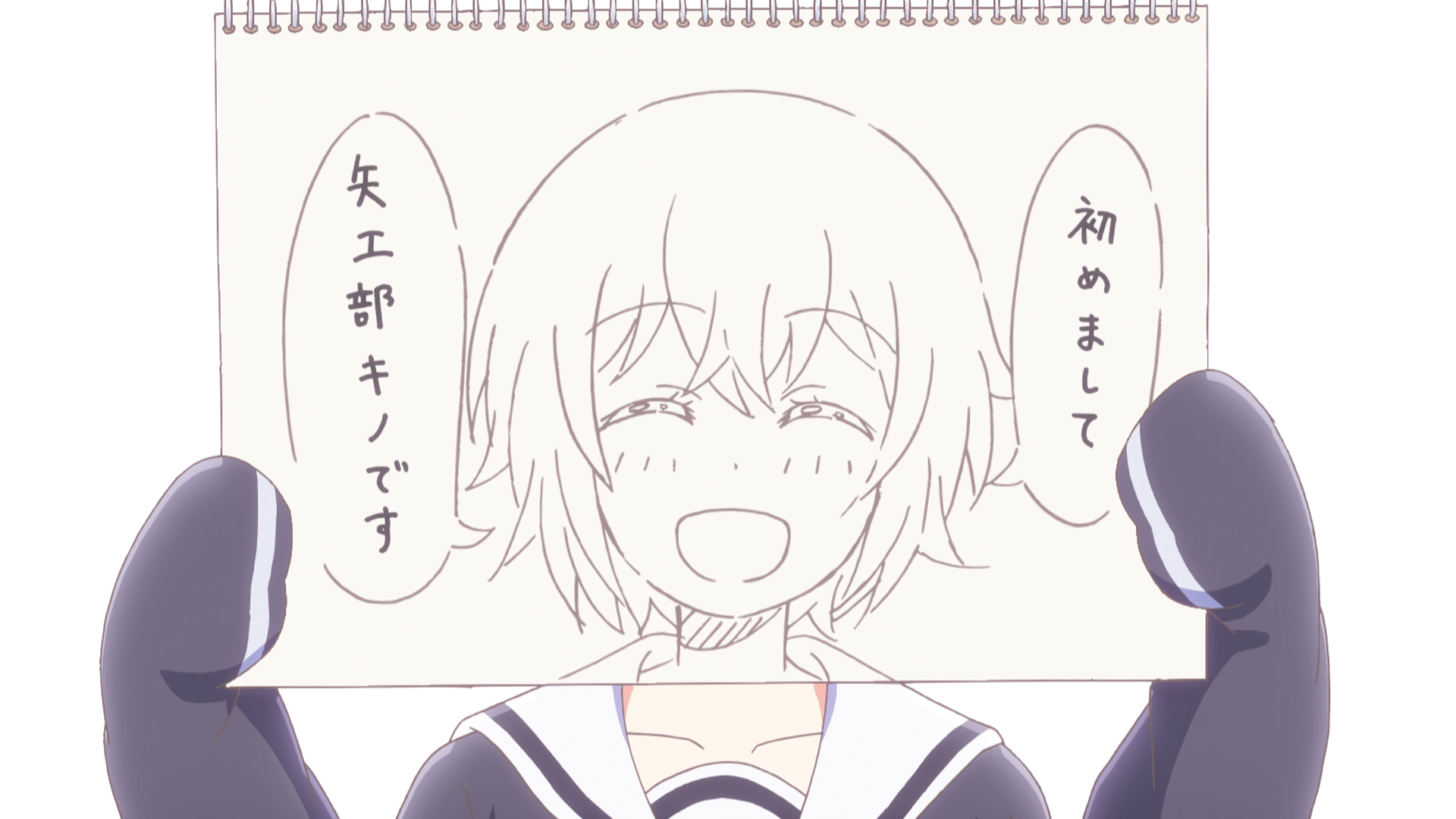 The strongest aspect of Senryu Girl is the relationship between Nanako and Eiji. As the Literature Club president Amane Katagiri (Sayuri Yahagi) cheers the titular character on, the two find themselves partaking in activities that bring them closer together. Whether it’s hitting the theme park or helping fix the school’s rabbit cage, the two friends slowly blossom into more than that with every good deed and action delivered. While there is seemingly no conflict to be found in their relationship (or even in the plot itself), one can just look at this anime and see it as a nice breather from all the other anime rom-coms out there.

Studio Connect (Armed Girl’s Machiavellism) showcases the warmth this anime delivers with vivid brightness in every scene. Although far from perfect, the visual aesthetics of the characters and their surroundings deliver a sort of fluffiness that is sort of needed for a series like this. The same goes for its soundtrack, composed by Akiyuki Tateyama (Laid-Back Camp), which uses beautiful piano and string arrangements that mesh its shiny backdrop with soft classical jazz and folk melodies. (It also goes without saying that its opener “Kotonoha no Omoi” by Sonoko Inoue may be one of the finest & bounciest theme songs of the season, which is paired up nicely with Rikako Aida’s R&B-styled ending song “Ordinary Love”.) 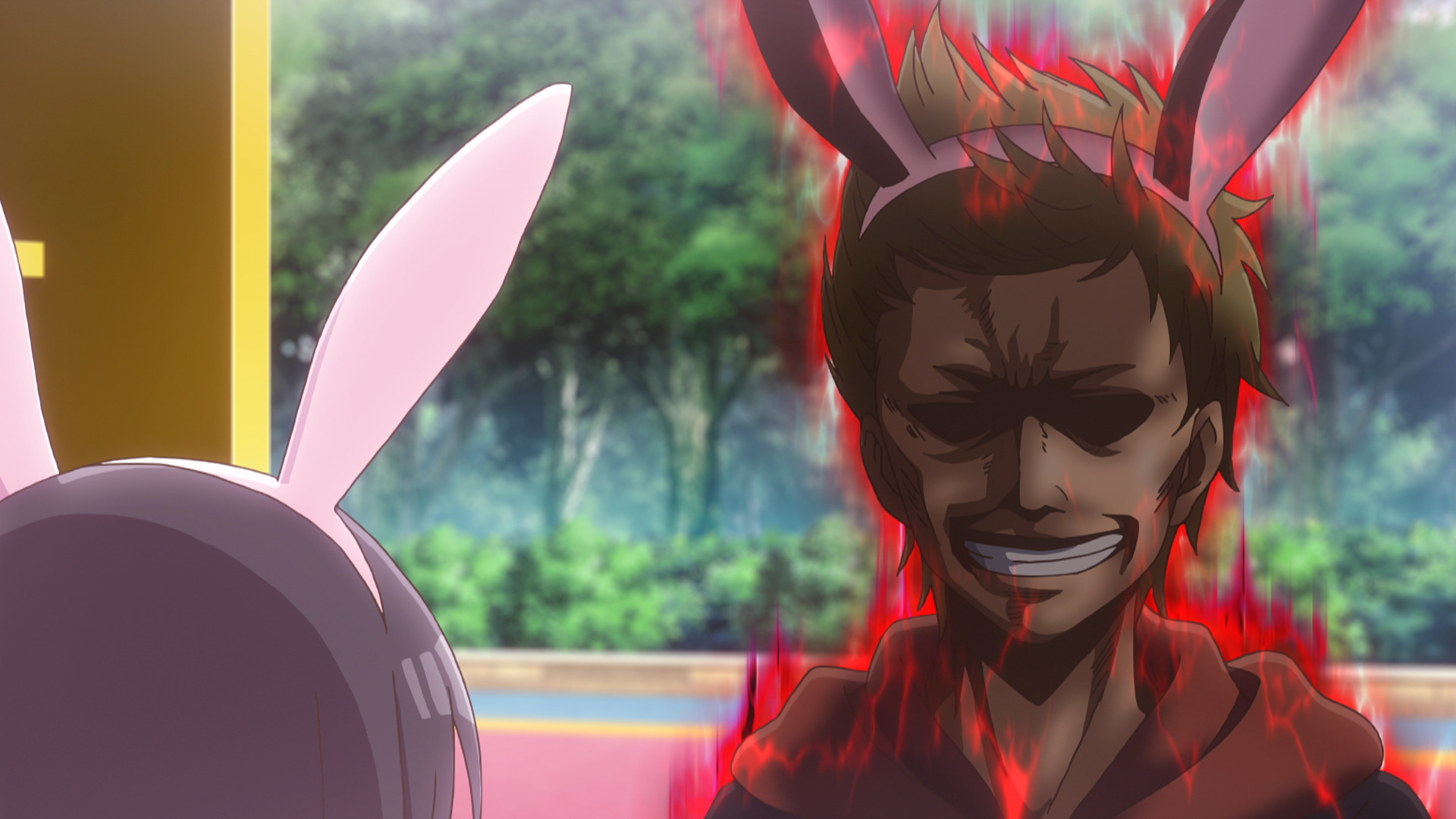 However, it’s the voice cast that makes Senryu Girl such a joy to experience. Hanazawa gives off a cute and heartfelt performance as Nanako, bringing to life the right amount of shyness and adorability to the character every time. Hatanaka sheds the tough guy persona of Eiji early on, with him able to transform the former delinquent into a noble friend as the series progresses. As the voice of reason, Yahagi takes on the role of Amane with a mixture of humorous overconfidence and heart.

Senryu Girl is a lot of things. It’s funny, heartfelt, sweet, and incredibly cute. What’s more, it also knows how to deliver a much-needed dose of positive endorphins to erase any sort of bad day vibes that were once resting in one’s essence. One cannot help but smile at the antics between Nanako and Eiji, even if their love for one another isn’t quite put out there for them to fully realize. How else can I recommend Senryu Girl more than by writing a senryu myself:

If one needs to have
Their cloudiest days brightened,
Watch Senryu Girl.

Senryu Girl can be viewed on HIDIVE, VRV, and Crunchyroll. It has been licensed by Sentai Filmworks. Episodes 1-8 were observed for this review. Promotional consideration provided by HIDIVE & VRV.