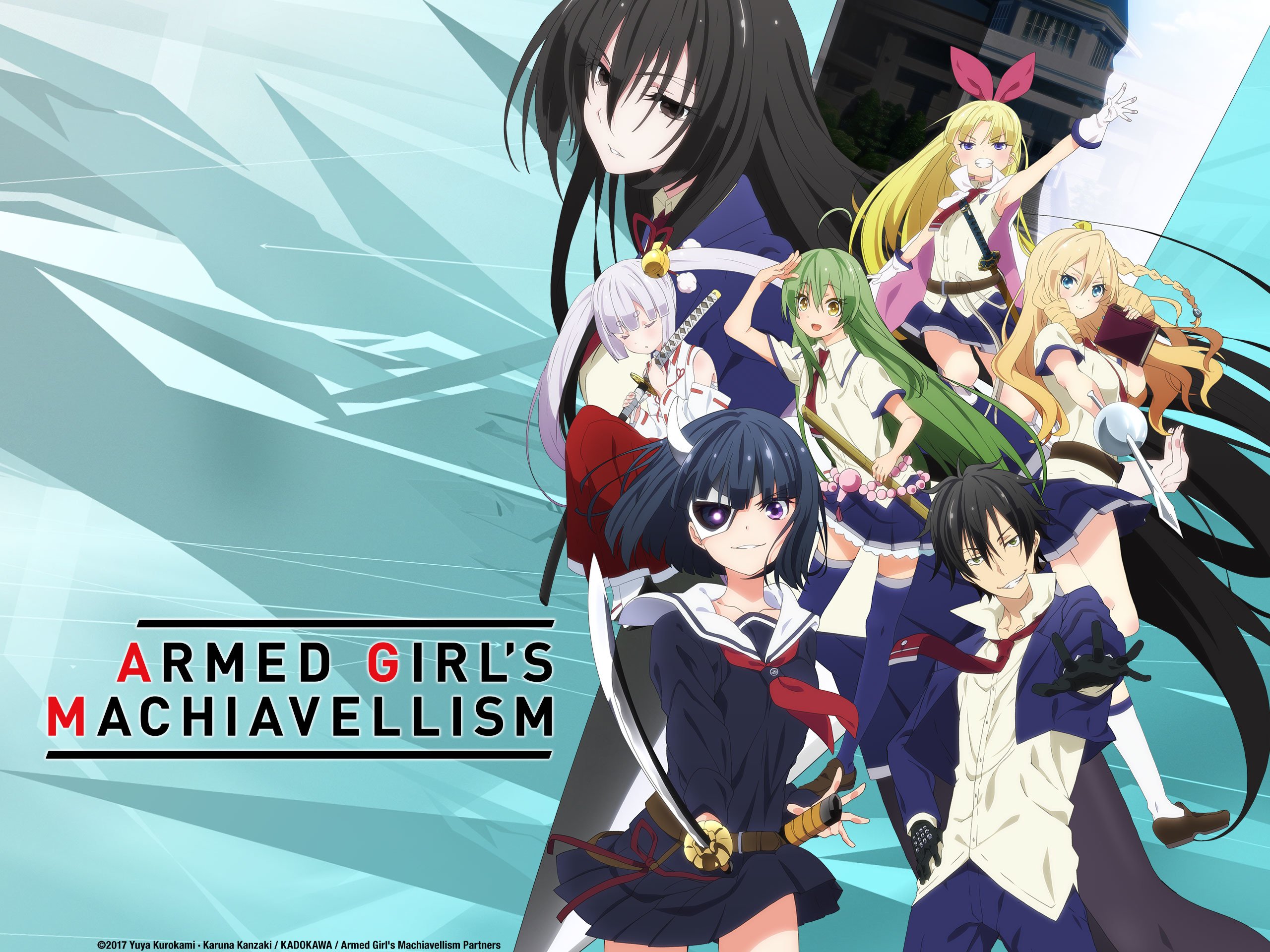 Silver Link can be known for having a wavy reputation when it comes to their anime. On one hand, they're responsible for some fantastic anime comedies and iyashikei like Non Non Biyori, Tanaka-kun is Always Listless, and Baka & Test: Summon The Beasts. However, they're also the reason why we have the poor adaptations of Masamune-kun's Revenge and Anne-Happy on our hands. And then there's Armed Girl's Machiavellism, a series whose exact premise I can't seem to wrap my head around despite reading it over repeatedly in the hopes that it started to make sense.

Based on the manga by Yūya Kurokami and Karuna Kanzaki, Armed Girl's Machiavellism focuses its main plot on newcomer Nomura Fudo (Tasuku Hatanaka/Scott Gibbs). He's transferred to Aiichi Academy, a high school whose women population has been oppressing the male population ever since the place went co-ed. Not being the kind of guy who'd stand down for such behavior, Nomura challenges the main female clan of the school, The Supreme Five Swords, to let him attend classes the way he wants to. Fronting the Supreme Five Swords is Rin Onigawara (Yūki Takada/Kira Vincent-Davis), a demon mask-wearing master swordsman who manages to find herself guarding Nomura from the very threats her team is throwing at him. 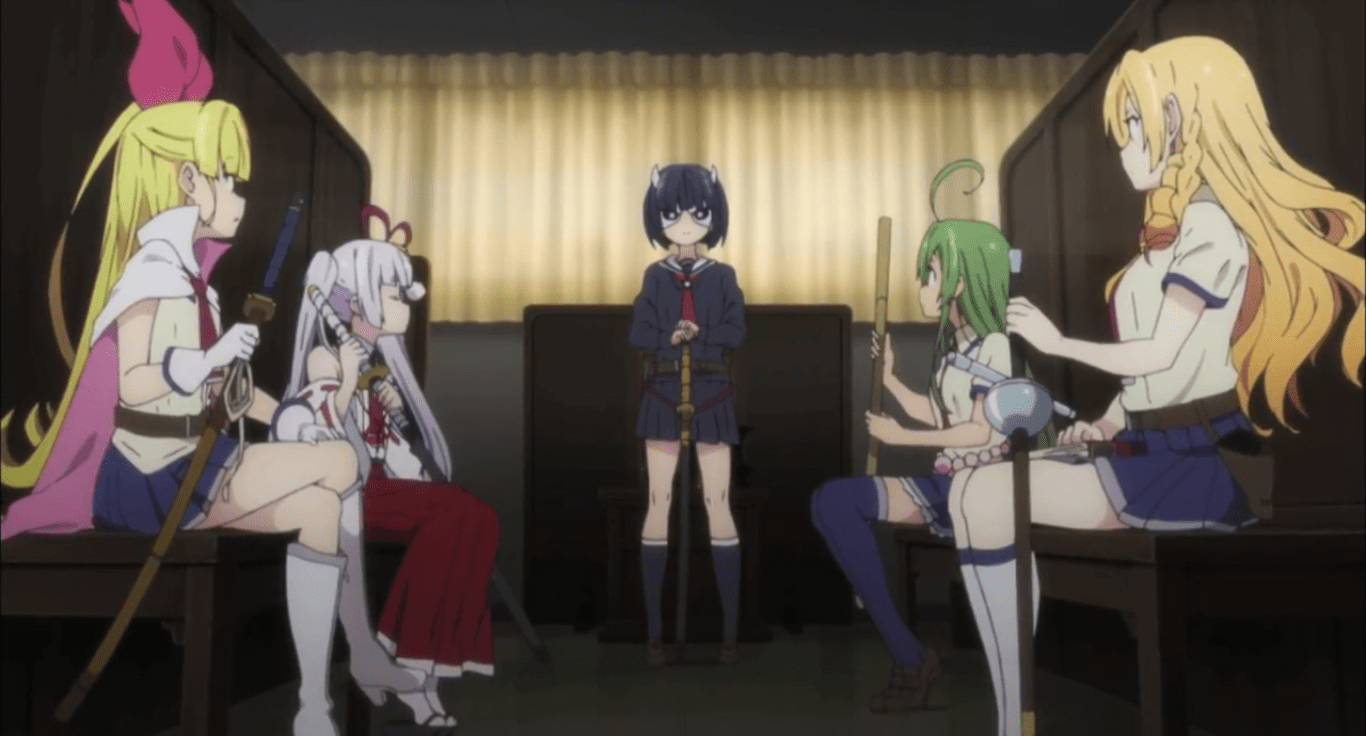 In order to become free from the oppression that's being pushed by the female body, Nomura must defeat every member of the powerful group. With each victory, he earns a stamp on a pass card, which -- when completed -- will give Nomura the freedom to leave the campus whenever he wants for leisure time. As he fights his way through freedom, more members of the Supreme Five Swords see his worth, including the Western fencer Mary Kikakujou (Sayaka Kitahara/Maggie Flecknoe) and Warabi Hanasaka (Rina Hidaka/Juliet Simmons), who fights alongside her massive pet bear Kyoubou. However, within the school campus lies a secret not only tied to Nomura's past, but is also the main reason why he had to transfer to a new school in the first place.

Where do I begin when it comes to the flaws of Armed Girl's Machiavellism, besides the fact that "machiavellism" isn't even a word? For starters, having the plotline being Nomura earning stamps to find his way off-campus is, to be the most blunt, incredibly dumb. Past anime have fighters and warriors of high school age earning their right to be known as the best; or in some storylines build upon the basis of seeking vengeance against another student who wronged them. The little amount of effort that was placed into this anime's story is not only baffling, it makes you wonder how the original manga got approved to serial in the first place! 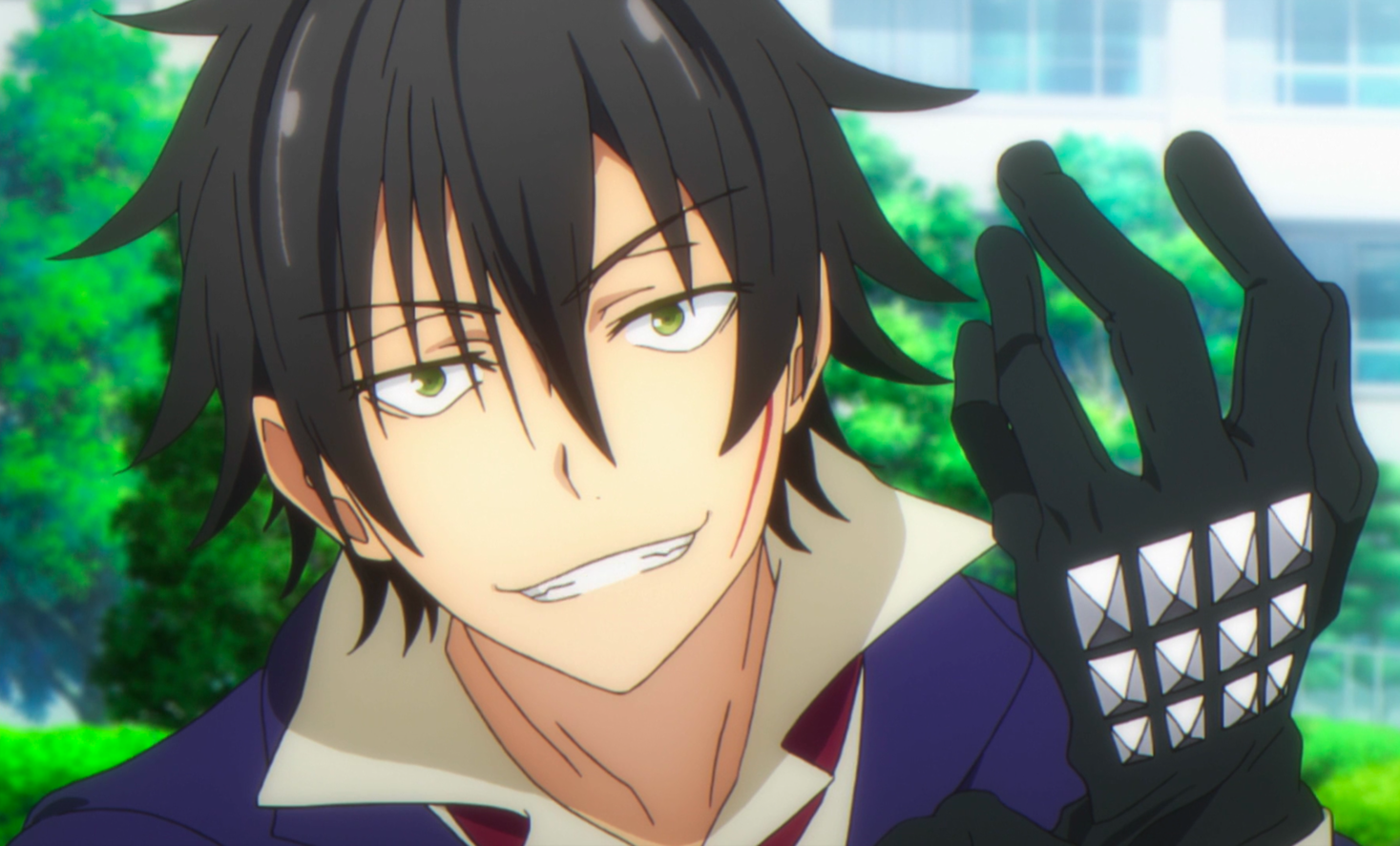 While the story itself is rather lazy, there are some decent highlights in the script. The old love triangle aspect between Nomura and the tsundere duo of Rin and Mary can be pretty entertaining, with the latter humorously switching between Japanese/English and French when flustered. It also helps that there are some strong characters in the series, including the blind master swordsman Tsukuyo (Natsumi Hioka/Luci Christian) and the somewhat crazy Satori (Nozomi Nishida/Allison Sumrall). Hell, I even got a laugh at how the other male students are forced to wear makeup and take up drag queen-like personalities, showcasing how far the women go to emasculate the opposite sex throughout the series.

However, I feel that because of the main plot being drawn out ever-so slowly, it rarely feels like there's much progression with the relationships between Nomura and the Supreme Five Swords. While there are some good jokes both verbally and physically, they don't do much to push along whatever sort of tale is being told. Even its main antagonist Kirukiru Amou (Eriko Matsui/Carli Mosier) doesn't feel as fleshed out as most series villains are. Despite it taking the "not bad, just misunderstood" angle with just about all the characters, you aren't getting enough of a push to flip the love/hate switch in the part of your brain that makes you feel something for these characters. 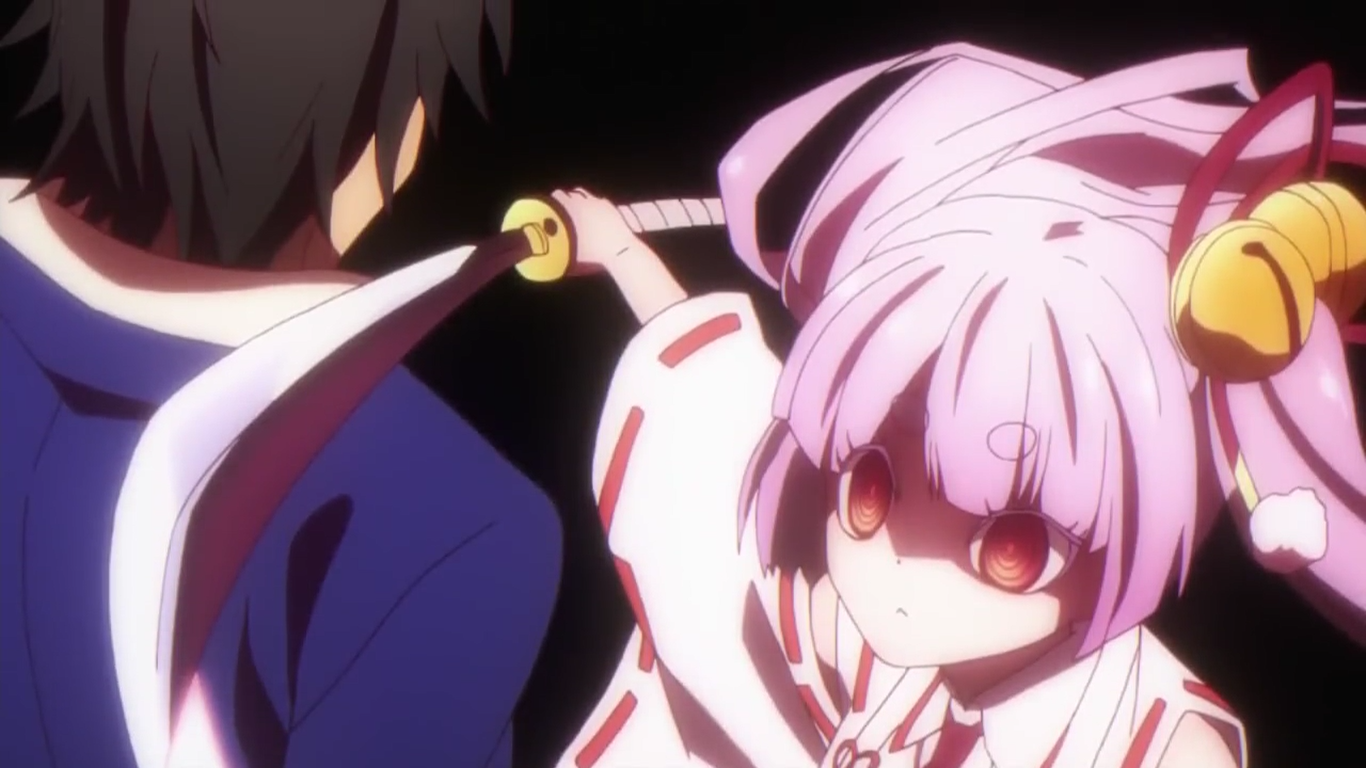 And that, readers, is Armed Girl's Machiavellism's biggest problem. Because these characters aren't giving enough of a backstory as to why they act in such a way, you aren't given the opportunity to relate or see enough of their angle in their ways of life to genuinely care about them. Characters come in, throw down, become BFFs immediately afterwards, and repeat! Nowhere do you see why these women chose such a path or why they carry a grudge against anybody with a meat & two veggies between their legs. These mentalities make zero sense whatsoever, plain & simple!

At the very least, you can tell that the voice actors were trying their best with what they were given. The Japanese dub has some highlights, especially with Hioka switching between super serious and super adorable as Tsukuyo and Hidaka's Warabi being both wonderfully silly and tough in battle. However, it's the English dub that shines so much better, with the script taking some better liberties at making dialogue sound a lot more interesting. The banter we hear with Gibbs, Vincent-Davis, and Flecknoe as Nomura, Rin, and Mary respectively is a whole lot more entertaining in English compared to the Japanese version, whose actors sound surprisingly wooden delivering line that are supposed to be intimidating. 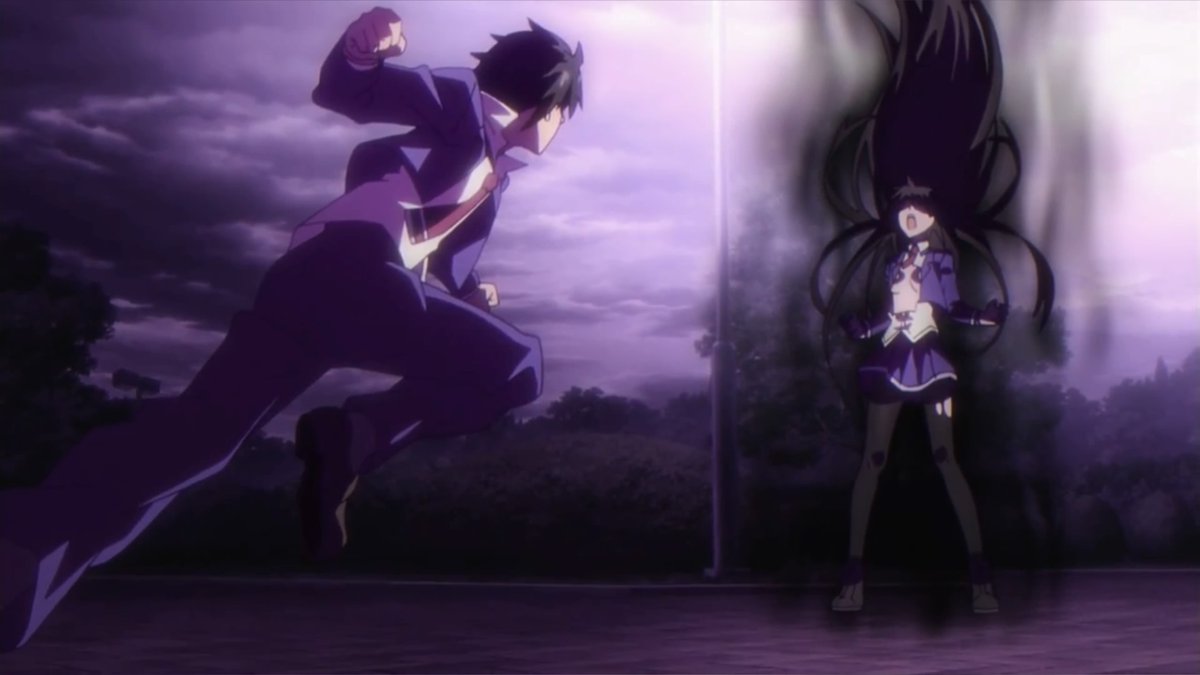 Animation-wise, Silver Link doesn't quite hit the mark. While the designs of the characters are cute, it's the actual sword fights and battles that seem very lackluster. Although the quality does get better during the show's final climax, it doesn't make up for the sloppy edits and shoddy cutaways that are filled throughout the show's run. Even the fan-service moments -- especially when Satori faces off against Nomura completely naked -- look incredibly unappealing.

One of the show's brighter aspects is the soundtrack from Team-MAX's Hiromi Mizutani. Although the music works well during the comedic aspects of Armed Girl's Machiavellism, it's the thrash metal sounds that blare during battles where the blood of the series gets pumped into its heart. On the other end, the opening theme "Shocking Blue" by Miku Itō and Tenka Goken's closer "Decide" are not the least bit memorable, save for the former's opening harpsichord riff sounding a bit too similar to The White Stripes' "Icky Thump" guitar solo. 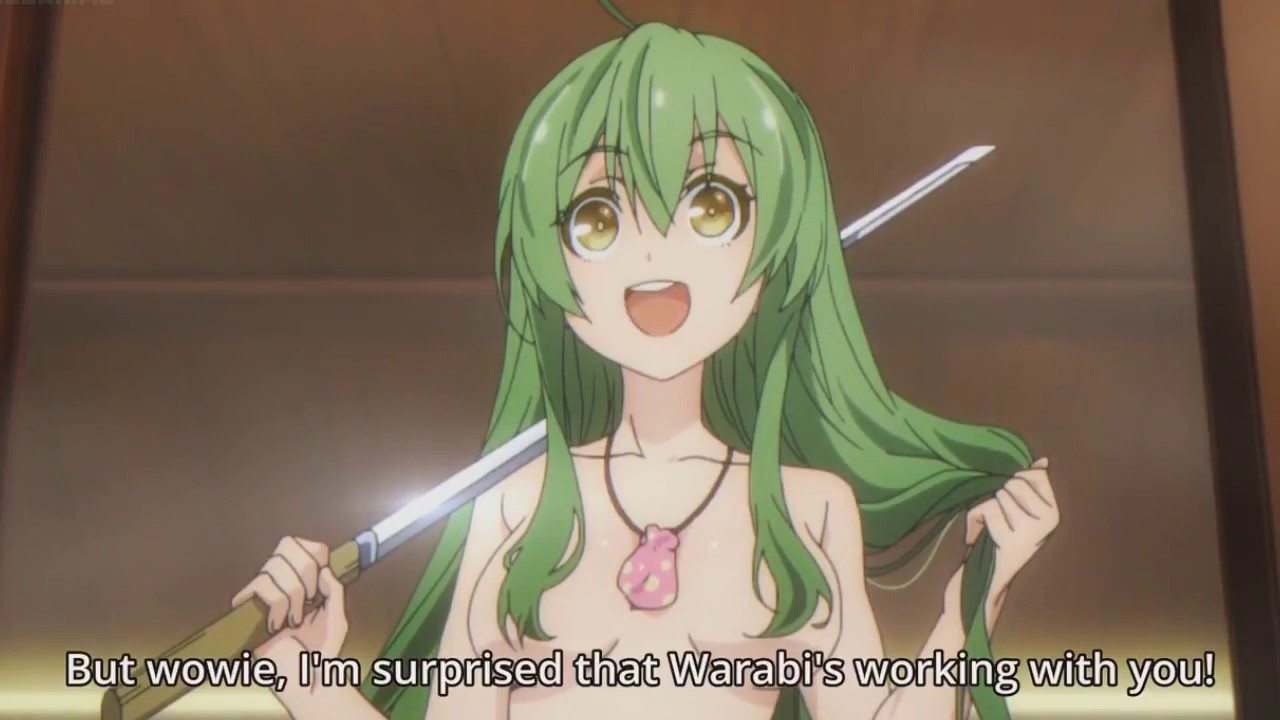 As for Blu-Ray extras, it's at least good that Sentai Filmworks included the bonus OVA into the packaging. Although it adds very little to the already-concluded story, it gives way to some entertaining scenes involving Nomura studying for midterms and the girls rushing to get to the hot springs due to some old folklore regarding a wish. Other than that, all that remains are the usual suspects: clean opener & closer, Japanese promos, and various other trailers from Sentai's catalogue. (Those who throw in some extra cash for the limited edition version will get some sweeter bonuses, including a 240-page art book and some well-drawn art cards.)

Armed Girl's Machiavellism may have a strong conclusion, but its nonsensical plot and poor animation make it hard to muster it up for a recommendation. While the English dub surprisingly does a good job with bettering the characters and their mannerisms, it cannot fix the story that's being told. A goal like being able to leave and roam outside the campus is more like a midway three-episode arc in a show, not the entirety of the plot. It might not be completely bad, but Armed Girl's Machiavellism lacks a strong attention-holder to make it worth your time.