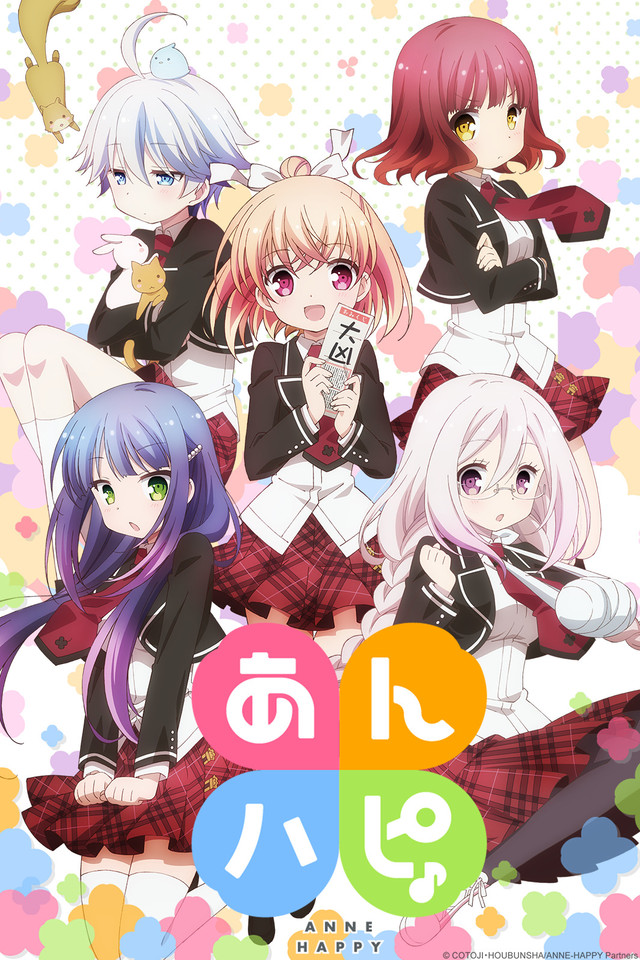 Bad-lucked characters have been something of a staple in the animation realm, whether it plays with an unlucky day (i.e. Any Friday the 13th-based episode) or simply a person that is prone to some pretty bad karma. But what happens if you were to focus not just on one person with bad luck, but an entire classroom filled with unluckiness? That's the premise of Silver Link's Anne-Happy, a comedy that attempts to throw around a plethora of humor and winds up with a mixed bag.

Based on the manga by Cotoji Anne-Happy focuses on Class 1-7 of Tennomifune Academy. While Classes 1 through 6 focus on academics and athletics, the seventh division are instead taught about overcoming their own misfortune and achieve a proper dose of happiness. At the center of this misfortune is Anne "Hanako" Hanakoizumi (Yumiri Hanamori), whose constant positivity is riddled with some of the worst kind of luck imaginable. After befriending the accidental-prone Botan (Kiyono Yasuno) and the construction site mascot-obsessed Hibari (Haruka Shiraishi) her luck slowly begins to change, but obviously not for the better. Together -- along with Ren (Mayu Yoshioka) and her friend Hibiki (Hibiku Yamamura) -- the friends of misfortune attempt to get through each day without too much karma-induced hassle. 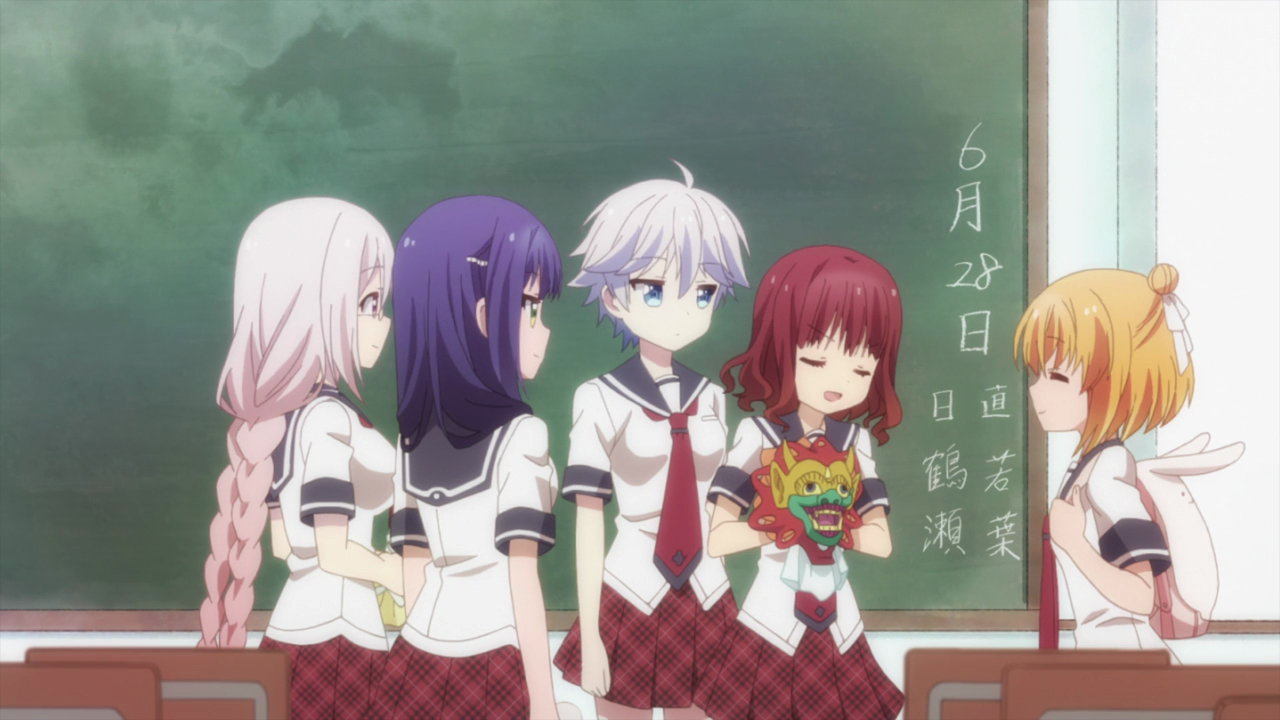 When I viewed the first episode of Anne-Happy at this year's Anime Boston I initially was expecting it to be a feel-good goofy cutesy comedy. In some cases the bad luck that bestows the characters can be quite funny, be it Hanako always being attacked by tiny animals or Botan constantly injuring herself doing the most mundane of things. However about a couple episodes in the horrible juju these characters are constantly tossed into can become rather stale. Honestly: I started feeling bad about everyone's misfortunes rather than be entertained by it.

It also doesn't help when an unnecessary mascot character is tossed into the ring, with robot bunny Timothy's (Chitose Morinaga) presence bringing forth many groans and eye-rolls from this reviewer. While it's somewhat humorous whenever Hanako attempts to hug the furry android, everything else this character brings to the table is just plain unnecessary. It's fortunate when Timothy never shows up in an episode, and instead the home room teacher Kodaira (Yumi Hara) is there to coach and support the girls throughout their turmoils. 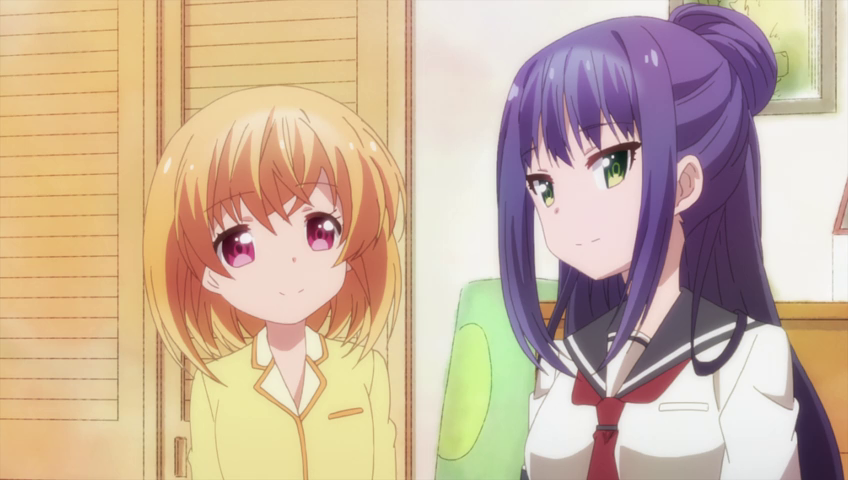 The thing that bothers me about Anne-Happy is that Hibari just seems like such a wasted character. At first it would seem that her only quirk is her fondness for this cartooned image of a construction worker, and would be the good luck bond that Hanako and Botan desperately needed. Instead she's just as unlucky as the rest of them, thereby making her purpose on the show sorta useless. A shame, considering all the early potential she showcased in the first couple of episodes.

While I do enjoy the voice acting in this series -- especially from Hamamori and Yamamura -- the rest of the cast doesn't have as much of an oomph factor that helps make their characters seem more interesting. Maybe it's because of the material they're working with, but it's not the most enthusiastic acting I've heard in a Silver Link production. A mere syllable from Morinaga's Timothy is one of the most annoying sounds that's come across in an anime this year, and that's saying something. 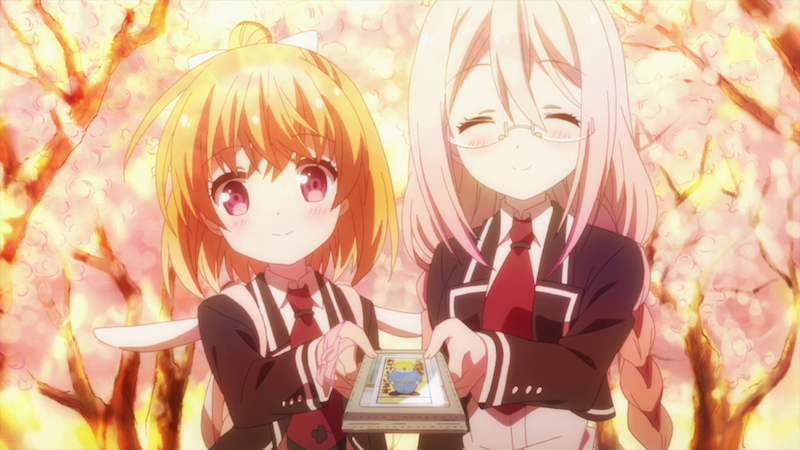 At least the show looks good, which presents the rather colorful aspects that Silver Link is known for. Perhaps it's to compensate for the negativity Anne-Happy tends to bring to the characters each week, but the outer worlds and hallways of Tennomifune Academy are filled with life and positivity. It's a flip-flop of their other show Tanaka-kun is Always Listless; and where that show had average animation and a fantastic script, this one has a great appearance shelling some uninspired writing.

Monaca's score can also be a hit-or-miss, with the more classical pieces fitting well with the upper moments of the show and the wackier melodies sounding as if the musicians are trying too hard to get silly. For a subpar show, it's been bookended with two of the catchiest themes of the Spring anime season, both of which are performed by the voice cast under the Happy Clover alias. Opener "PUNCH☆MIND☆HAPPINESS" is a very show tune-y ear worm that'll make you hum the melody many hours after you've heard it. Its closer "Ashita de Ii Kara" is a calm song that just simply makes you feel good when you hear it.

Anne-Happy has its share of ups and downs, and while it can be entertaining at times it doesn't really contain the spirit and fun tones that most of the other anime comedies this season are showcasing. Yes, it can be funny, but half the time you'll feel sorry for these characters. Maybe it's best that Anne-Happy give back its lucky rabbit's foot, because it's not really doing them any favors.

Anne-Happy! can be viewed on Crunchyroll. Episodes 1-9 were observed for this review.