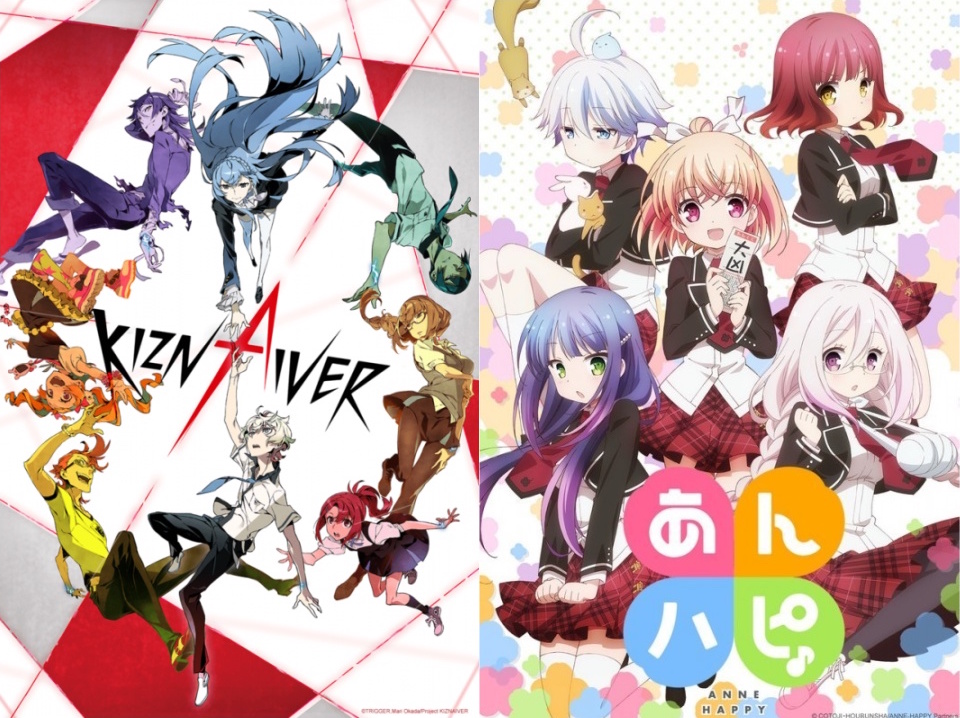 With Crunchyroll being the premier sponsor of Anime Boston 2016, it would be highly appropriate for them to premiere one of their latest acquisitions hitting their site this Spring. Not only are they delivering with such a premiere, they're doubling down on it, with the first episodes of Studio TRIGGER's Kiznaiver and Silver Link's Anne-Happy (or Unhappy Go Lucky! as it's known in the US). How do these two series fare from their respective series premieres, and will they be worthy of adding to your queue?

An original series, Kiznaiver focuses on Katsuhira (Yuki Kaji), a semi-emotionless high school student with an inhuman tolerance for pain. After being saved from a bullying incident he wakes up to the sight of the mysterious woman Sonozaki (Hibiku Yamamura), who begins to talk to him about a new kind of Seven Deadly Sins, one of which is him. Soon he and six others -- including his friend Chidori (Yuka Terasaki) -- find themselves in a hospital, where it turns out their beloved city is part of a massive experiment, and that they've been chosen to become Kiznaivers, a group of people who share the same pain mechanisms.

With it being Studio TRIGGER you can expect some pretty impressive visuals, as well as some fun and complex characters. Kiznaiver shoves you deep into the mystery at the very first scene, and as the episode unravels more and more of the reason behind Katsuhira's physical and mental being is slowly revealed. However why he became this way is still unknown, with minor and quick flashbacks only showing bits and pieces of his true self. Like most of TRIGGER's works, the series also balances some drama with some hugely light-hearted humor, especially when it comes to the air-headed character of Nico (Misaki Kuno).

On the other side of the spectrum, we're given a head-on collision of slice-of-life comedy in Silver Link's Anne-Happy. New students An (Yumiri Hanamori), Ruri (Haruka Shiraishi), and Botan (Kiyono Yasuno) start their first day of school, where classmates are assigned a specific number -- be it 1-6 -- depending on their academic or athletic capabilities. The three new friends find themselves in Class 7, where it is revealed by their optimistic teacher that everyone in this specific class has a long string of bad luck. An loves animals, but they don't apparently love her back; Botan always injures herself in the most extreme cases; Ruri is in love with a construction site sign character.

For the first assignment the teacher asks the students to care for an egg, and to make sure it doesn't break. Being bad luck students, the task is far easier said than done. However the big reveal at the end showcases the least-likely student being successful in the task, with a nice little surprise delivered to her as the egg begins to hatch. Animation-wise the colors and character designs are very easy on the eyes, as Anne-Happy seems to be a good comedy to watch when in need of quiet relaxation. It's humorous, adorable, and the right level of innocent when it comes to certain parts of the really bad luck aspect.