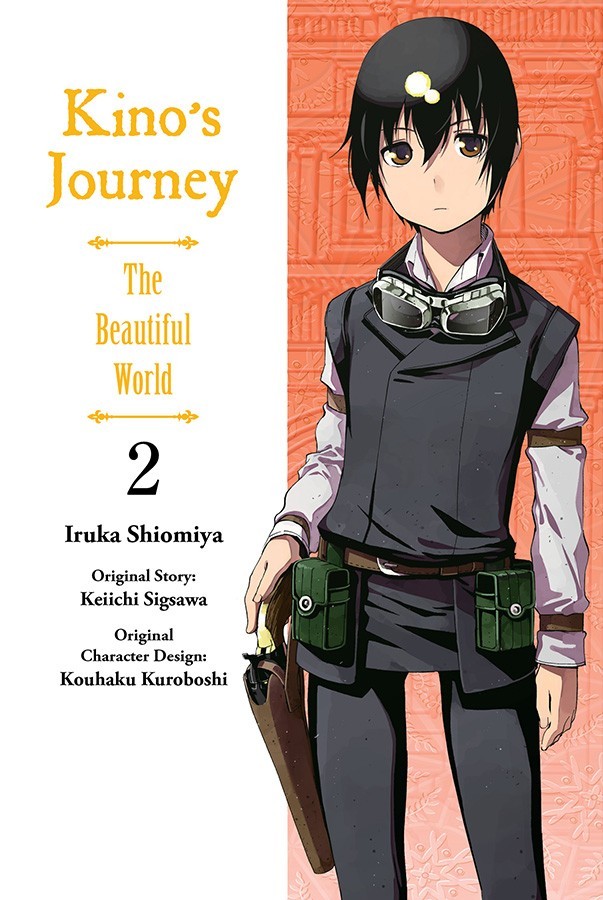 If there’s one thing Kino’s Journey: The Beautiful World does a great job with, it’s showing why some ideas that look good on paper don’t exactly work well in execution. The tale of a lone traveler and their talking motorcycle (and the closest thing to a full-fledged Heat Vision & Jack continuation we’ll probably get) puts into perspective how a great concept can turn ugly in an instant. Volume Two of Iruka Shiomiya’s manga adaptation of Keiichi Sigsawa’s original light novel series demonstrates this flawlessly in its collection of stories.

The theme of compromises plays strongly in this volume of Kino’s Journey, as our titular character travels to two different locations. One city seemingly has no citizens, whereas another is brimming with life. However, it’s a little snooping around that causes Kino and Hermes to discover the awful truths behind these two beautiful-looking cities. Naturally, the flaws and cracks of these foundations are dripping with some sort of blood...

There’s a fine line that this manga walks when it comes to taking certain actions to task. A country where everything is decided upon majority rule sounds about good, until you are shown what happens when seemingly good ideas are squashed and its idea creators dealt with in such a brutal manner. The same goes for a town that lauds over the fact that their constant battles with a neighboring city results in zero deaths on either side. That is, until you see how they implement such an impossible-sounding task.

As the series progresses, it’s very clear that The Beautiful World in its title is meant to be said with a sneer. Thus far, no place Kino and Hermes traveled to has been good. Chaotic good, perhaps, but the chaotic aspect is as problematic as one could get. From capital punishment to the slaughtering of innocent bystanders, the innocence that this world the two roam about is ripped from its roots. Never once does the series feel afraid to go dark with its presentation, as it highlights why some fine ideas should never be pushed towards extreme measures.

Perhaps it’s why the moments where Kino and Hermes are by their lonesome when a breath of fresh air is discovered. The two odd chums find a level of happiness and satisfaction when they’re the only two around, as nothing stands in their way of having some sort of a good time. When the evils of the world are not pushed in front of them, it’s very easy to find some sort of solace in a remote desert or during an unexpected rainfall.

Kino’s Journey: The Beautiful World is filled with great life lessons and superb what-if scenarios. Shiomiya manages to adapt Sigsawa’s original worlds, and bring them to a new life with a strong realization on how to show both the beauty and the horror that this world is capable of. With its second manga volume, Kino’s Journey demonstrates why it’s best to plan accordingly, especially when a seemingly perfect idea can turn ugly fast.