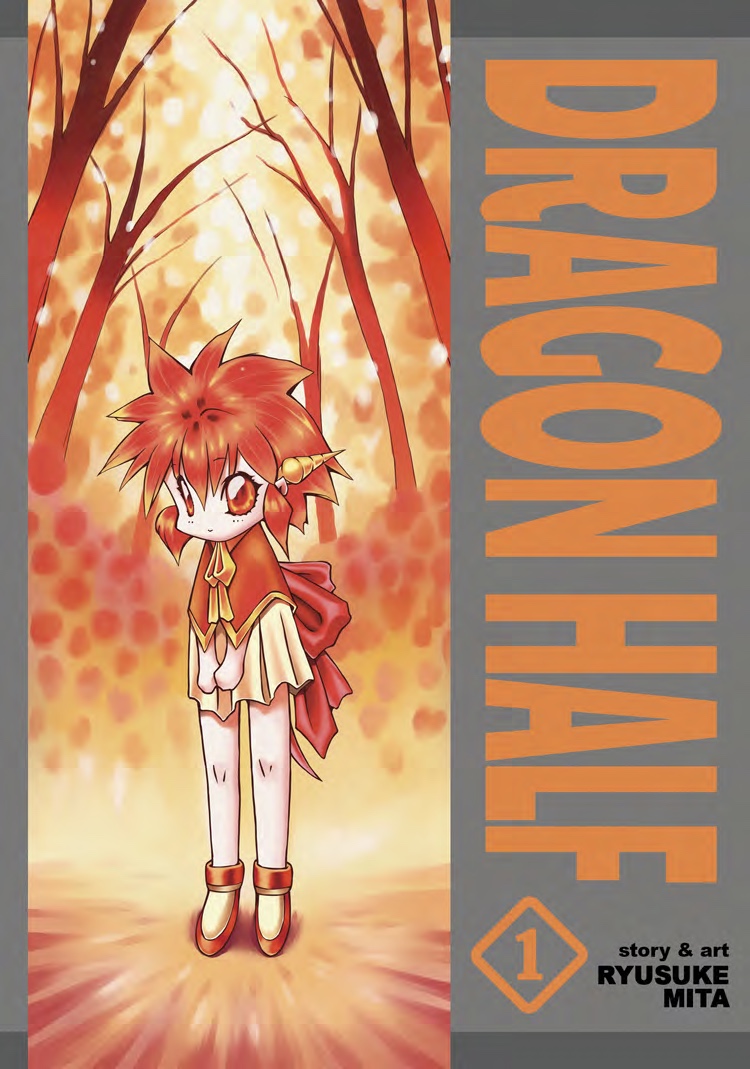 I remember many a tale of the infamous Dragon Half back in college. While watching the insane two-episode OVA in anime club, there were rumors spread that the show was cancelled due to "everyone in production being on drugs". (Actually, it was because of a much more dull reason: the video sales weren't up to par.) So it brought a smile to my face when I saw Seven Seas Entertainment bring Ryūsuke Mita's original 1988 manga series to American shores for the very first time. Unlike its OVA adaptation, Dragon Half makes a lot more sense with its narrative, albeit with the trademark craziness that has made it a classic staple within the anime community for over two decades.

Of course, Dragon Half isn't just some wacky manga from the 80s. Many people, the author included, declared it as the first RPG-inspired comedy written in the world. Without its influence, the likes of Slayers, Magical Circle Guru-Guru, KonoSuba, and That Time I Got Reincarnated as a Slime wouldn't have existed. In a way, a lot of fans and writers owe a depth of gratitude to Mita for his creation, as it paved the road for an entire sub-genre of anime, manga, and light-novel comedies that were created in its stead. But the question remains: has it aged well over the last thirty years? 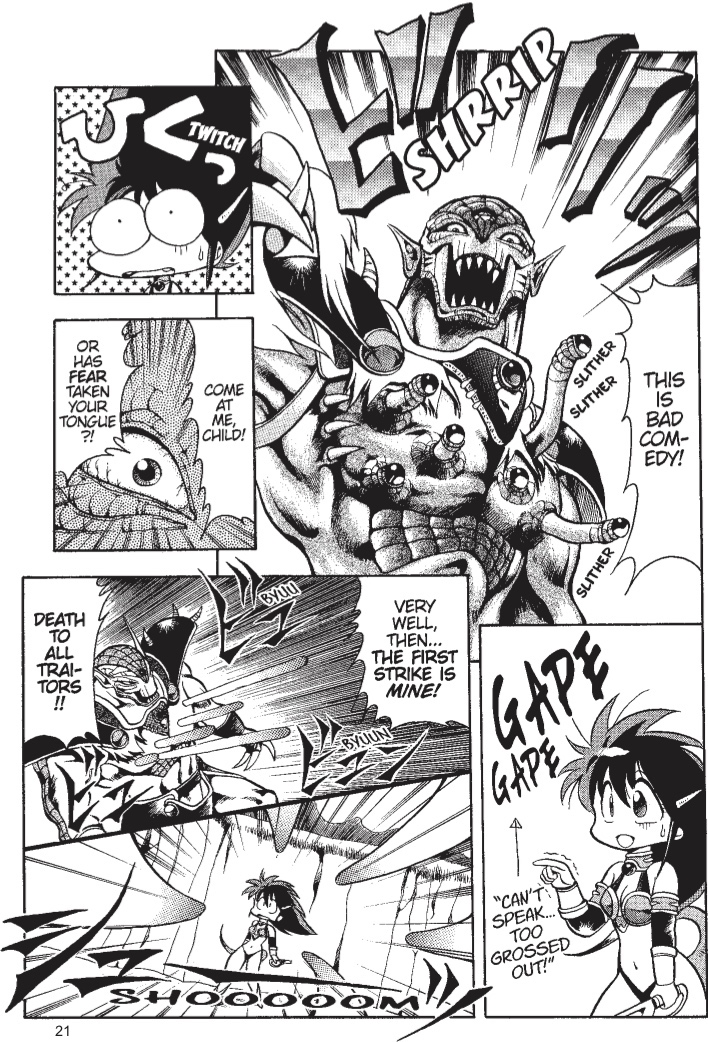 Collecting the first two books in the omnibus edition of Volume One, Dragon Half tells the story of a half-dragon girl named Mink. She is in love with fantasy singing idol Dick Saucer (yes, that's his name in the original Japanese!), but because he's a dragon slayer, she sets out to find a potion to make her fully human. With the "aid" of her friends Lufa, Pia, and Mappy the mouse, Mink goes on a quest that's more zany than epic. However, with King Siva and his half-slime daughter Vina itching to strike her down, the journey becomes a lot more complicated than it should ever be.

The thing that makes Dragon Half an enjoyable read is its means of never taking anything so seriously. Every fight, conflict, and "dramatic" monologue always leads towards a big joke, one that delivers a huge laugh each time. Whether it's a smart laugh about a funny misunderstanding or even a childish gag involving poop or boobs, Mita goes for the gold with sheer confidence and a silly grin. Execution-wise, it gains a silver medal for even its lamest jokes, showcasing just how funny Mink's adventure truly is. 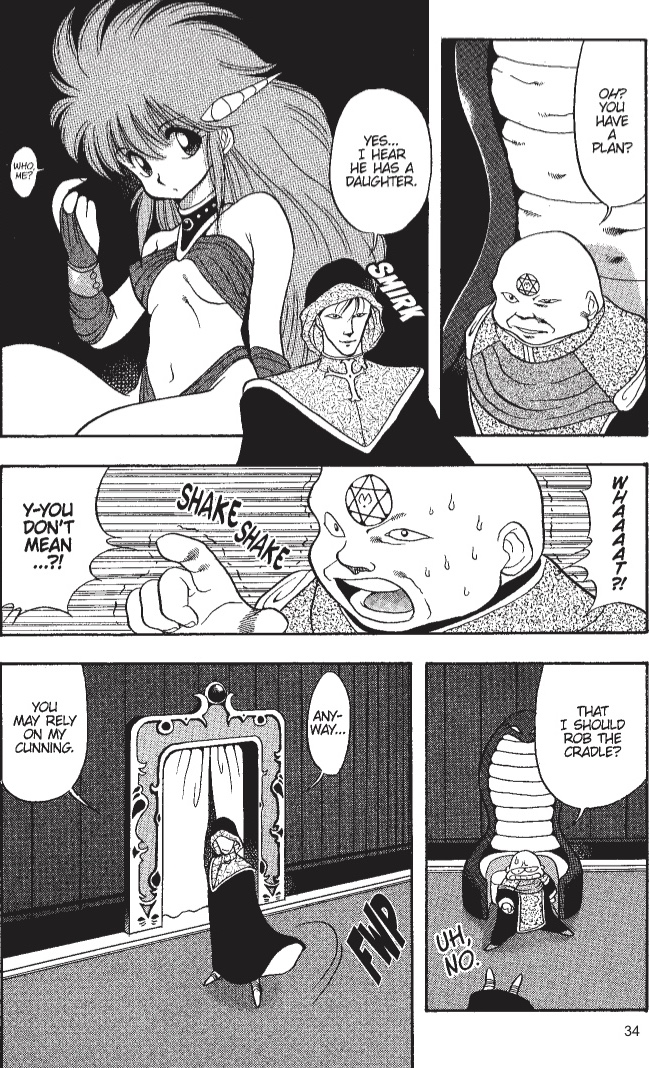 What makes the story work so well is because of how lovable everyone in the story is. Both heroes and villains are presented with much confidence, but will instantly flip a switch to show how dumb and nerdy they truly are. The banter these folks have, on top of their utter stupidity, drives the narrative through some great character development, even if said development takes a left turn on someone like King Siva or Dick Saucer solely for laughter's sake. It also knows when to attempt to go for a more perverted joke, with the naughtier character always failing spectacularly with Benny Hill-like grace.

Many of its jokes do take some sort of knowledge of RPG games to fully understand. Dragon mythology, different kinds of monsters, and styles of weaponry are on fully display with a wink and condescending smirk laid down for good measure. For the most part, one only has to have watched a Peter Jackson film or read even a couple of Prince Valiant comics to get what Mita is jabbing at. It also does a great job with explaining the strength of gag manga protagonists, with even the biggest of spider monsters or demon lord spawns only leaving slight head bumps and scrapes on Mink and her friends. 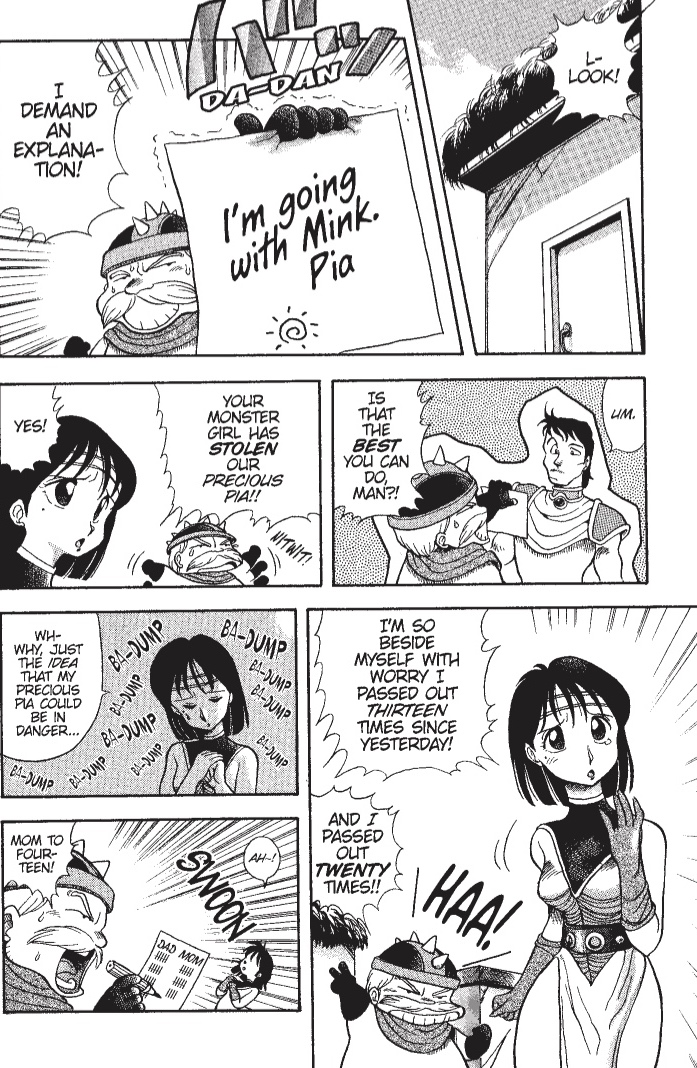 Mita's art style is just as enticing as his writing. Switching back-and-forth between some beautifully-detail art straight from a Dungeons & Dragons book to even the goofiest of gag manga-like visuals, the panels brim with as much personality as both a serious and satirical series meshed into one tale. Even the mini-tournament arc presented near the end of this volume flashes between some great battle sequences and knee-slapping hilarity, giving way to some unexpected punchlines that come right out of left field. Despite it being a product of the 80s, Dragon Half still manages to look great compared to many present-day series.

A great bonus in the omnibus collection are the special artworks and notes from Mita, showcasing the evolution of Mink and her story towards becoming a human. Like the manga itself, Mita's words are filled with humor, half-jokingly referring to his "painfully average" art style and his love for every dorky creation he's created. There's even a little commentary that comes with every chapter, diving into how he went about writing each scenario and the highlights of bringing his characters to life on paper. 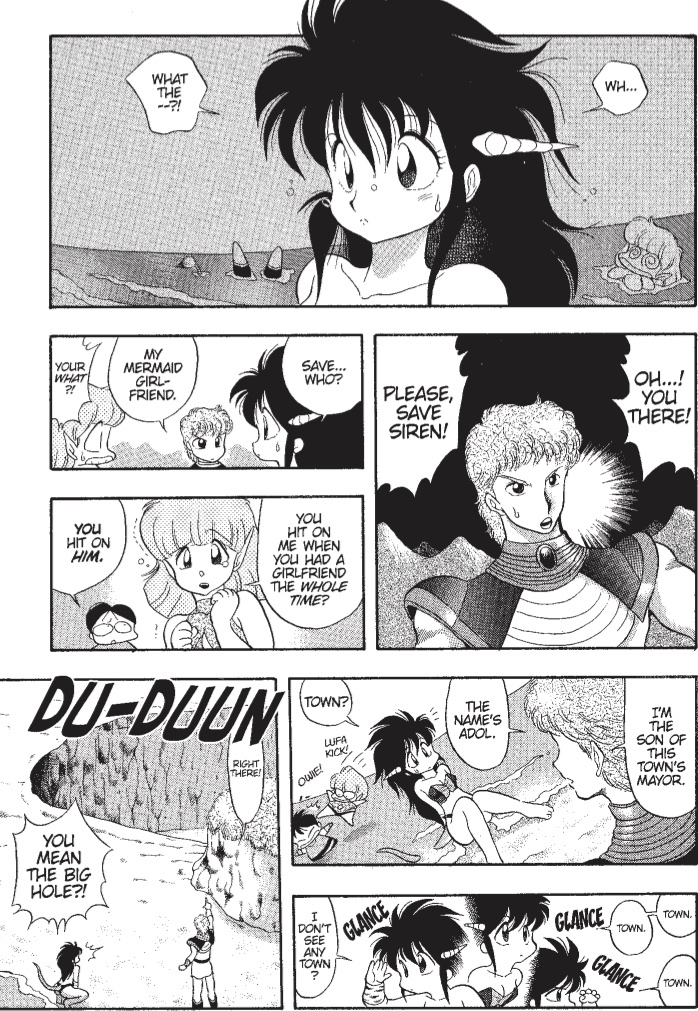 After reading this first omnibus volume, it's apparent that Dragon Half's infamy should be upgraded to someone more suited for a great series. As this was the first brick laid in the bridge between role-playing games and comedy, the importance of this manga is far too strong not to ignore. Thankfully, Mita's original series is also a hugely entertaining read, one that deserves a second look by anime and manga historians as a true golden standard of medieval humor and wackiness. Besides, if Magical Circle Guru-Guru can be given a second chance at being brought back into the spotlight, then by all means why not Dragon Half?!