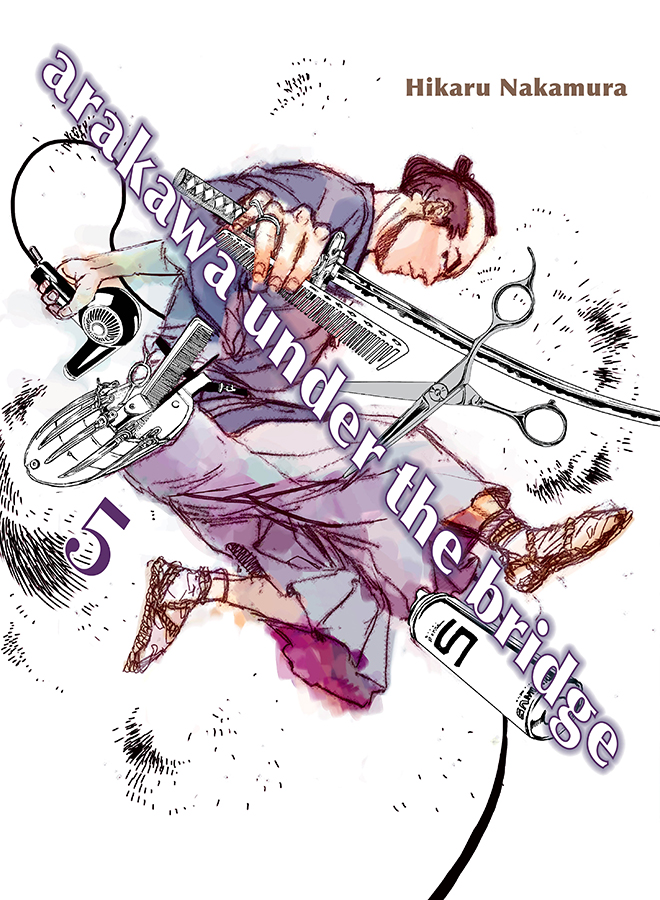 I will firmly admit that most people would have a hard time with Hikaru Nakamura's Arakawa Under the Bridge. With its foray of crazy characters and situations, the gag manga never slows itself down to fully appreciate the world that they're building. In past volumes, this wackiness is made up with its sweet heart and grounded romantic spirit. However, Volume Five is where Arakawa Under the Bridge even lost me in places.

Preparations are underway for some of the riverbed's citizens to head up to Venus with Nino and Rec, with even secretary Shimazaki taking some interest. It's when her heart is broken by Shiro when she snaps and returns under her newly-crowned alias Lady Spy, leading to some more problems than there should be. As the day for the rocket to launch gets closer, the residents prepare with some parties, weight-loss challenges, and even the occasional white line-drawing lessons that will aid any person towards a better path in life. But with an organization helmed by a mole-masked man now keeping tabs on Nino and the gang, leaving Earth has become, well, just as difficult as it initially was.

I've gone through many of these volumes of Arakawa Under the Bridge since they were officially published here in the States, and for most of the time I got the gist of what was happening in-between the main stories. There's usually a great dosage of character development, with characters like Hoshi, Mayor, and the Metal Brothers slowly revealing the humanistic sides that they hide behind masks & costumes. And with every new character introduced comes a plethora of fun kookiness that brings something silly & refreshing to the table.

But for the life of me, there are stories that legit went way over my head in Volume Five. Why does the Mayor hold much love for the guitar-playing lightning in the sky? What was up with that tea ceremony hosted by Last Samurai? Is there a reason behind the beach party and why the Amazoness had eels stuck in her throat? One should never have to question the looniness of gag manga, but this reached Pop Team Epic levels of uncomfortable weirdness that made my brain hurt.

Fortunately the main story brings things back into focus, with the date of the Venus trip drawing closer. Watching the gang attempt to lose weight so they can all fit on the ship brought out some legit clever gags surrounding the art of the diet. A touching moment with Rec's father brings their family's mantra full circle, giving way to a heartfelt nod of approval for Nino's love and a hearty realization that the dad needs to better himself as a human being. And while I can't spoil the end of this particular volume, it gets intense (albeit humorously) watching the riverbed folks race towards the rocket to Venus.

The latest volume of Arakawa Under the Bridge may have its funny and touching moments, but it goes all over the place with its storytelling like a kid with a bad case of ADHD. Although that has never hindered the quality in Nakamura's writing in past volumes, this was the first time I felt genuinely confused over what was happening. You cannot have chaos without a firm grasp of what order should be, and the fifth omnibus volume doesn't do that great of a job keeping to that golden rule. With the way things end, here's hoping that Arakawa Under the Bridge can regain the ground to plant its feet on while its zaniness runs amuck.