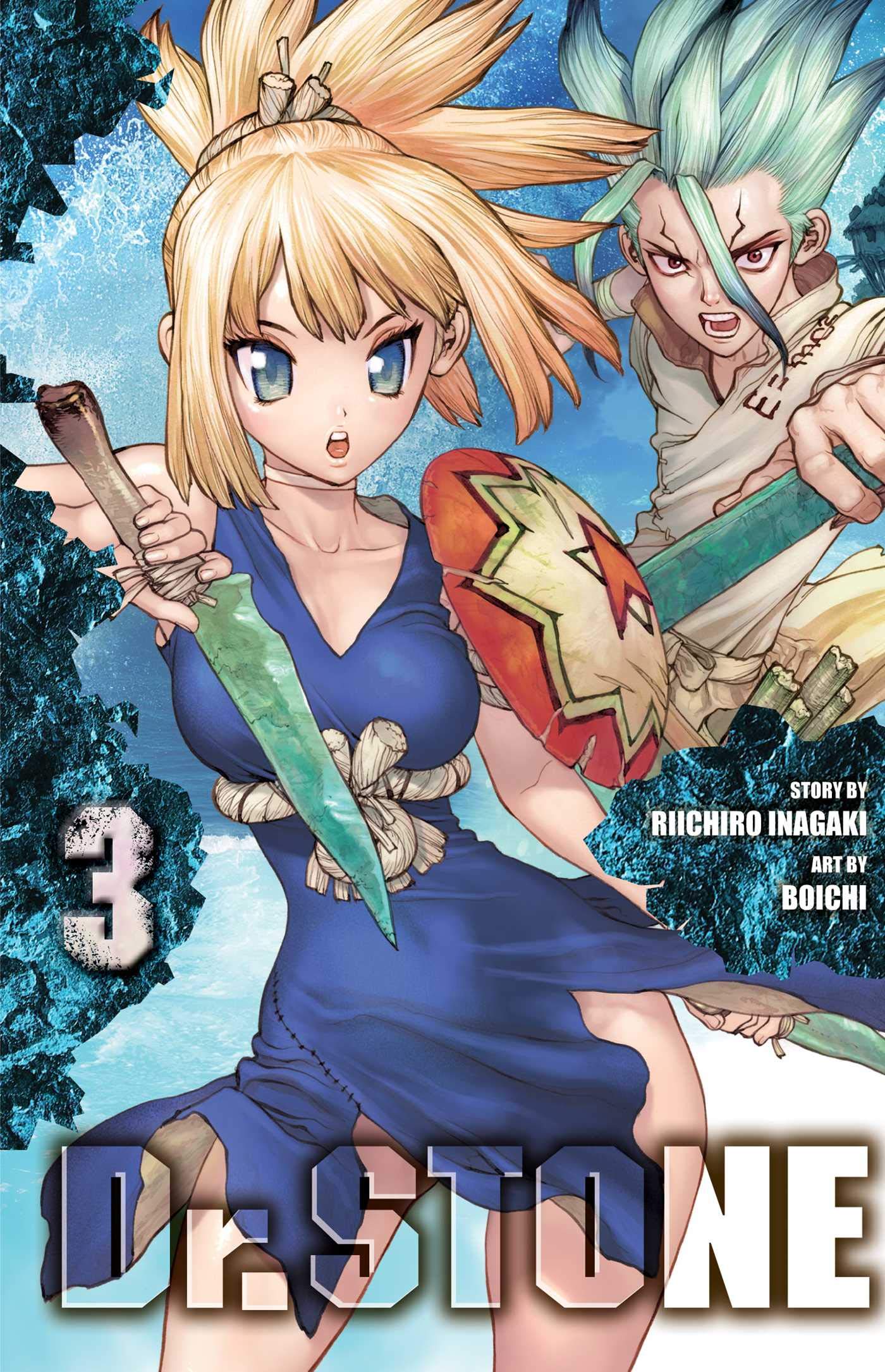 Every time I turn the page in a Dr. STONE volume, my hands shake with excitement. The story of Senku, Taiju, and Yuzuriha setting out to bring back the human race from extinction has constantly given its readers many a reason to be wowed. From Riichiro Inagaki's smart and hilarious writing to Boichi's beautiful (and often expressive) artistry, this manga encapsulates everything great about its genre into one singular series. Now that Senku has separated from Taiju & Yuzuriha for the time being, it's time for the brains of the operation to truly shine. The third volume of Dr. STONE is that moment, with the egghead gaining a new ally in his battle for science.

Leaving off where Volume Two ends, Senku rescues Kohaku, a woman who's strength would even give Taiju a run for his money. After lending a hand with carrying some hot springs water, Senku is introduced to the forty people that live in Kohaku's village, with her currently ill sister Ruri seen as something of the head of the village. There Senku meets Chrome, a so-called "baaad" sorcerer who really just found some fancy rocks and the like. Those minerals wind up being of great interest of Senku, who decides to not only use the materials to find a cure for Ruri's illness, but also jumpstart the world once more with som good ole fashion electricity! 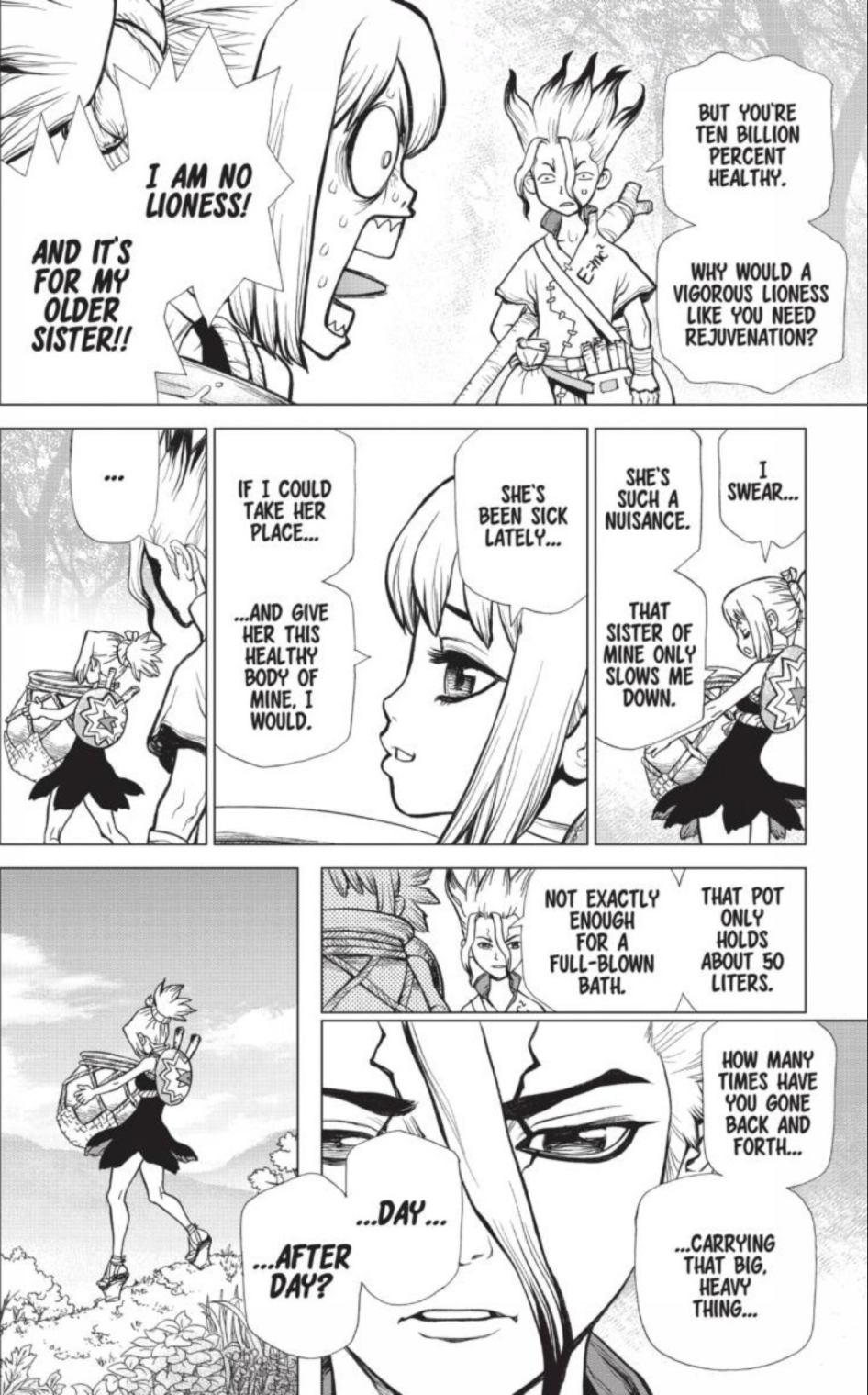 With Taiju gone, Dr. STONE takes the opportunity to showcase the brains of the series, and it's amazing to see how far Inagaki pushes the limits of human intelligence. From simply outsmarting the villagers to going so far as to reinvent ramen and shiny weaponry, Senku presents a mentality that gives way to just how brainy he really is. While Taiju wasn't the sharpest knife in the genius draw, it's apparent to see just how much the human race has dumbed down without the presence of some knowledge. All it takes is Senku making bubbles in front of the villagers to see just how stupid they truly are.

The character expressions have always been finely detailed in the series, but Boichi's art style goes all the way to eleven with its sheer hilarity. Whenever someone is surprised, shocked, or angered in this story, their face contorts in ways that I've never bore witness to in any form of visual entertainment. It's hard to describe, but it's almost like they're drawn as realistic Loony Tunes characters, with eyes popping out, snot running down, and jaws dropping to waists in the most uncanny of cartoonish ways. If the way Boichi's scenery wows you, then his characters will more than likely make you crack up. 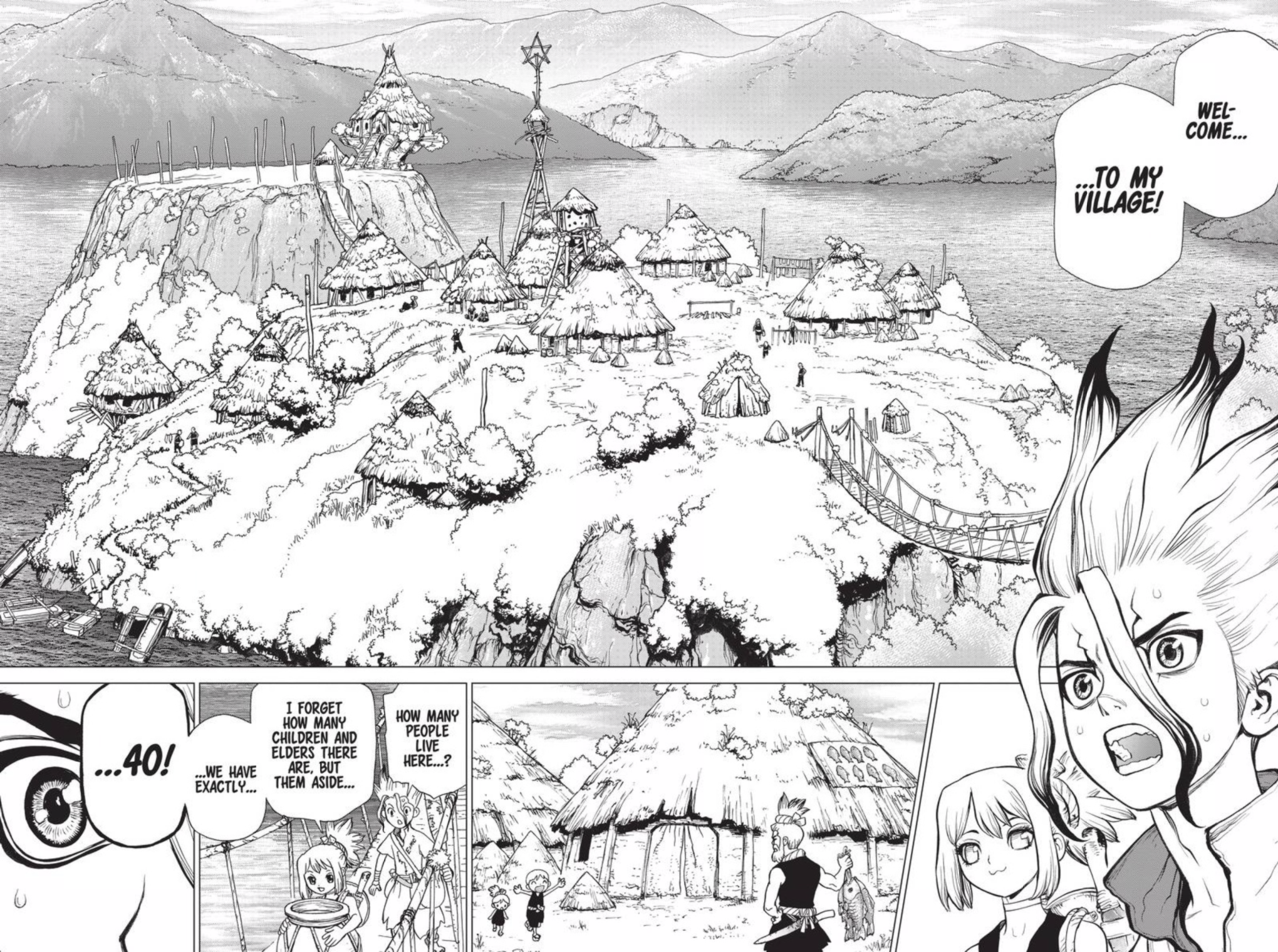 With the addition of some new protagonists to the realm, there's also someone new that's much more akin to watching science and strength battle it one-on-one. The character, a so-called mentalist named Gen Asagiri, first arrives as an ally for the main baddie Tsukasa. However, after watching Senku get his science on, he becomes more intrigued with the power of the mind over the power of the body. How he plans to fight in this war remains to be seen, but he seemingly has a good enough head on his shoulders to differentiate the good & evil that this world could bring.

It's stunning to see how Dr. STONE continuously delivers one impressive moment after another three volumes in. Whether's it's some smart or visual humor or a great "a-ha!" scientific victory, Inagaki & Boichi's story about the rebirth of humanity showcases some of the very best storytelling in manga in ages. Whatever great discovery or hinderance that may appear for Senku is still a mystery, but I am roughly ten billion percent certain that it's bound to leave me wide-eyed in awe of its greatness. Needless to say, if you haven't jumped on-board this Dr. STONE train, now is definitely the time!