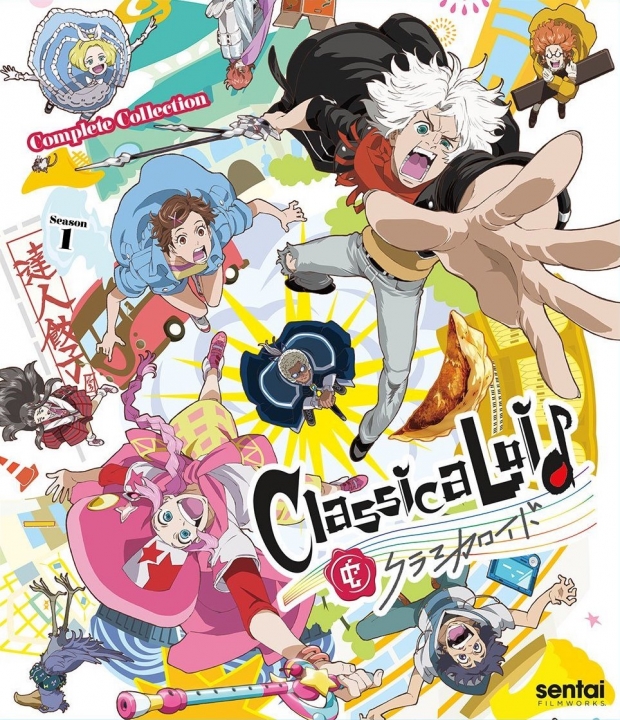 Classical figures in the modern world can lead to some very big laughs. We've seen this occur in Dan Harmon's Great Minds series, the warmhearted twist on religion in Saint Young Men, and Phil Lord and Christopher Miller's cult classic cartoon Clone High. The latter is what ClassicaLoid brought to mind as I watched the world's greatest composers interact with their 21st century surroundings. Yes, it's an insane concept, but even more crazy is how much it all works in such brilliant fashion.

Taking place in a rural Japanese town, ClassicaLoid puts its main focus on high school students Kanae (Mikako Komatsu) and Sosuke (Nobunaga Shimazaki). Kanae takes care of her late grandmother's mansion, as Sosuke hangs around attempting to get a hit in the music world. However, their world transforms into an obnoxiously exciting adventure when the likes of Beethoven (Tomokazu Sugita), Mozart (Yuki Kaji), Chopin (Kosuke Toriumi), Franz Liszt (Mamiko Noto), and Schubert (Tomoaki Maeno) start to reside in the mansion. What's more, they seem to have a magical ability known as Musik, which awakens some of the greatest compositions written and engulfs their surroundings into a wonderland of melodies. With Bach (Taiten Kusunoki) and his pop idols Tchaikovsky (Aya Endo) & Badarzewska (M.A.O) keeping tabs on them, a great mystery behind the ClassicaLoid begins to unfold. 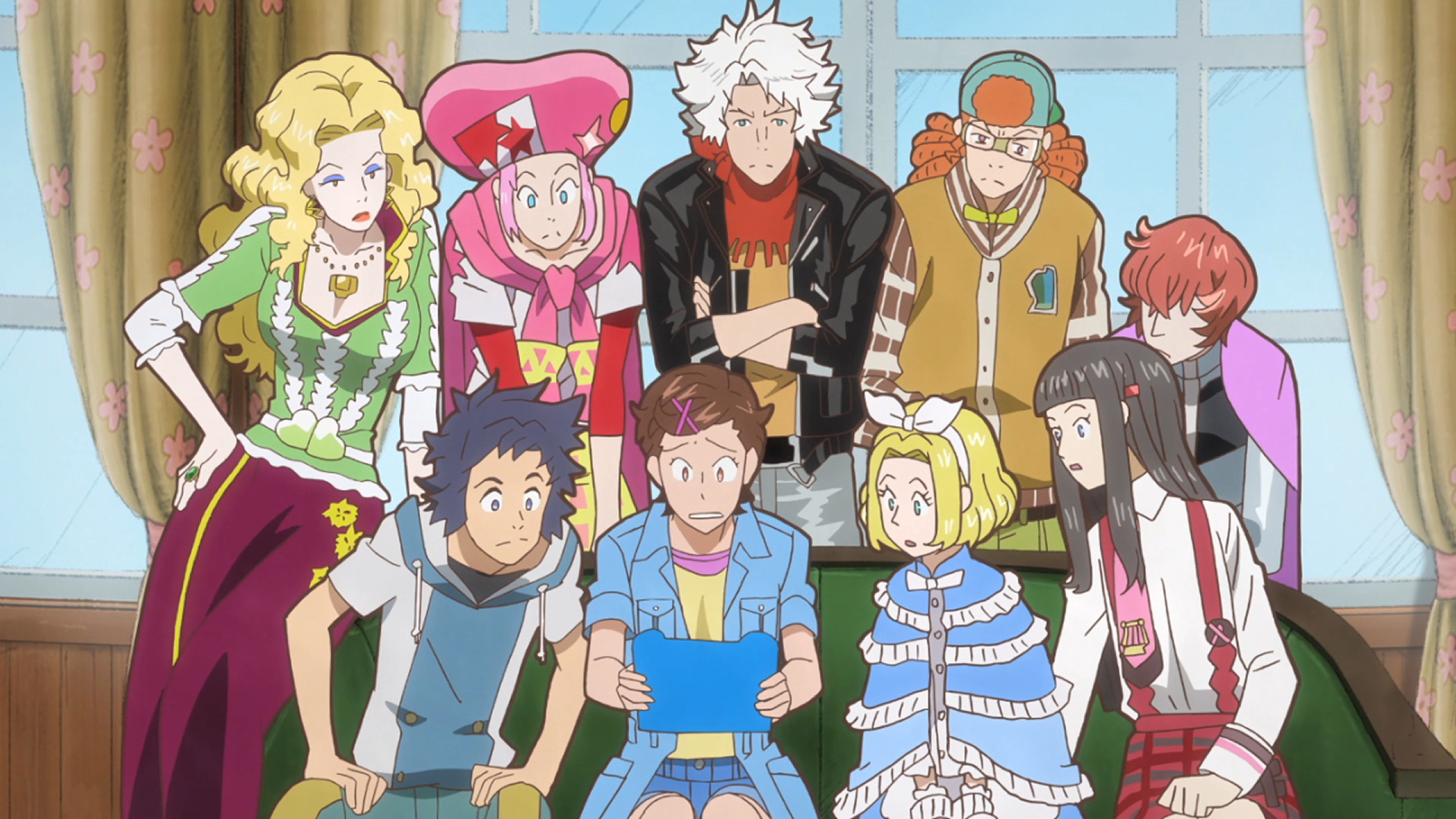 At first, a concept about iconic composers shacking up in a mansion in Japan is pretty damn cuckoo bananas loony, as we first see a carefree Mozart skating around the mansion while Beethoven tries to make gyoza again and again. Even seeing the likes of Chopin acting like a complete introvert and Liszt, Tchaikovsky, & Badarzewska take a female form can be considered a new level of madness achieved in Japan. And yet, despite some of its off-the-wall concepts, the show still manages to pay quite a lot of respect to the original composers.

Via Kosuke's talking tablet Pad-kun (Akira Ishida), viewers learn a lot about the compositions and the personalities of the true individuals that are showcased throughout. Their inspirations, the people that influenced them in their lives, and even the where's and when's of their pieces' debuts are presented via some knowledgable commentary that makes you feel like you've learned something within the more out there moments of ClassicaLoid. While nowhere near the educational series it could be (especially with it being produced by NHK Educational TV), the information it offers winds up not only being fascinating, but it adds a new layer to the actual composer that they're focusing on. 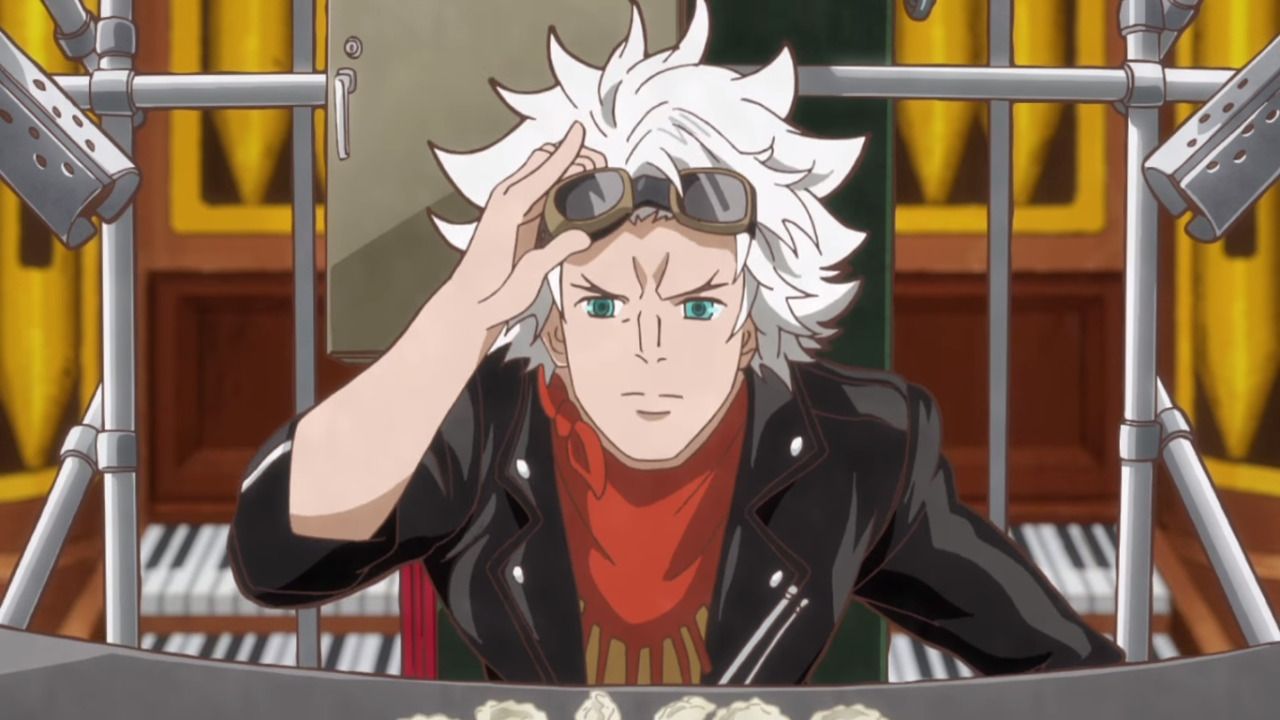 Of course, we don't watch a show about classical performers in the 21st century to learn about stuff; we watch because we expect something hilarious from the situation. Although it takes a couple episodes to really get things going, the comedy in ClassicaLoid reaches golden status in many amazing ways. Watching as Mozart acts like a complete goofball (which, to be fair, the movie adaptation of Amadeus did first) in new and fantastically ways each week is a treat both for the eyes and the funny bone. Seeing Beethoven attempt to make the perfect plate of gyoza kind of gets old at first, but it soon evolves in very silly ways when it comes time for him to craft new instruments and items.

Despite the focus being on the composers, it's easy to see why Kanae is the glue that keeps everyone together. As the vein in her forehead continues to grow due to the others not paying their rent or doing their chores, it's her willpower and strength that keeps the rest of the cast safe and in their own frames of mind. Perhaps it's why I found the episode involving Kanae being taken out for a girls' night with Liszt, Tchaikovsky, and Badarzewska to be the point where the anime achieved true greatness, with the karaoke scene alone being one of the funniest moments in anime this decade. (The lyrics in the "traditional Russian folk song" the idols sing will have anyone laughing their head off.) 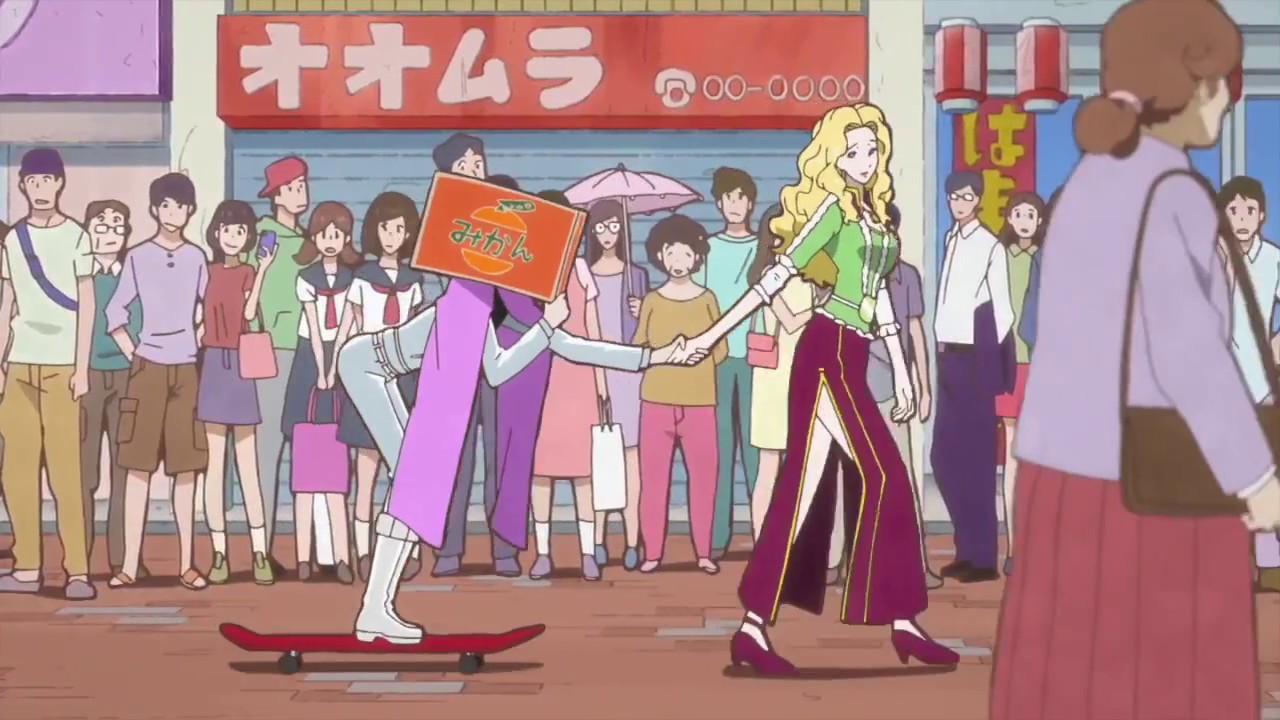 ClassicaLoid's voice cast is nothing short of stellar, with Sugita and Kaji shining the brightest in their roles as Beethoven and Mozart. Both acting on different stages of wild, their excitement and determination is captured wonderfully within their performances. Komatsu is very sympathetic as Kanae, as she brings out her frustrations to peak levels of hilarity. Maeno is simply funny as Schubert, sometimes stealing the show with his antics and mentality. Toriumi captures a shut-in attitude wonderfully as Chopin, with Noto's Liszt contrasting that perfectly with her very eccentric mindset and personality.

As this is a show about classical composers, one cannot help but be enticed by the music that is presented throughout this series. It would've been one thing to just simply have all of the most iconic compositions be reworked, but this anime takes it one step further by bringing in the likes of guitarist Tomoyasu Hotei, Final Fantasy composer Masashi Hamauzu, DJ tofubeats, hit J-POP producer Tsunku, and songwriter Daisuke Asakura into the fold. What comes out are some of the most unique and catchy interpretations of the works of Beethoven, Mozart, Schubert, Bach, and the rest of the gang, some of which have some surprisingly clever lyrics that coincide with the events that are unfolding. (My personal favorite is a reimagining of Mozart's "Russian March" that pays homage to a certain Michael Jackson hit.) 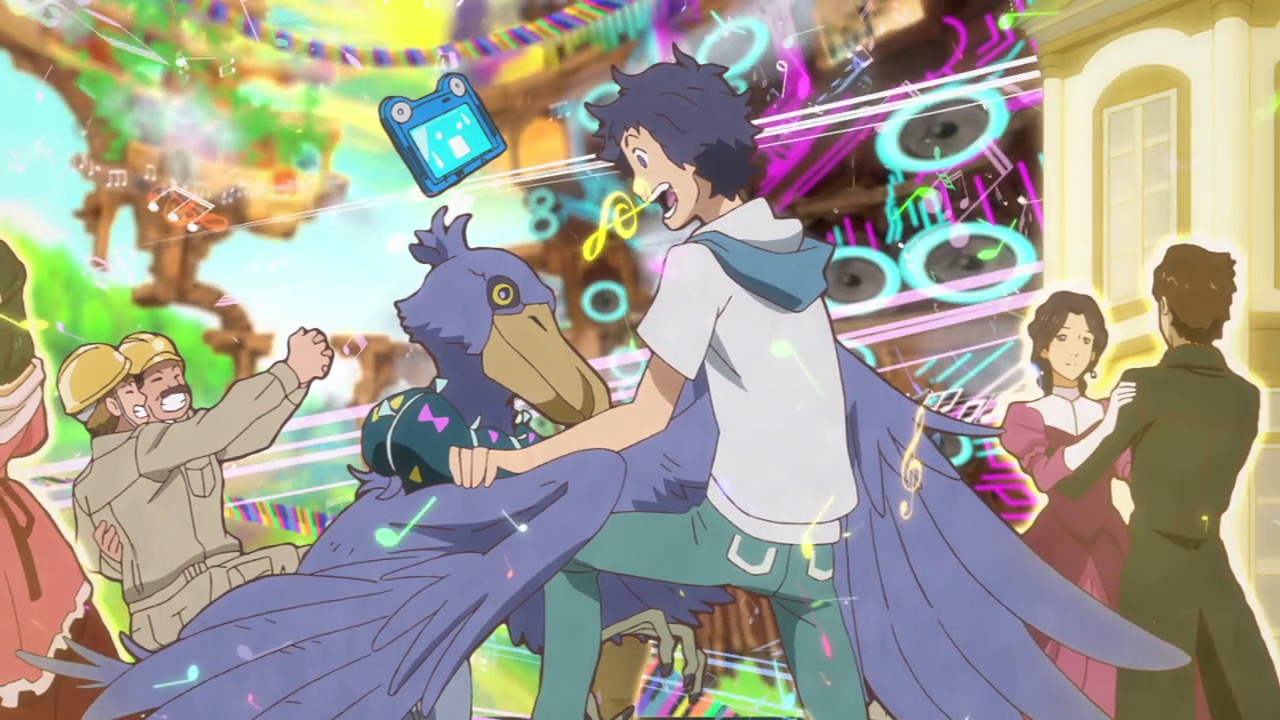 However, it's somewhat disappointing to see the animation not be as grand as its music. Considering it was produced by Sunrise (Love Live!, Mobile Suit Gundam), the visual look of the characters can sometimes be a little jagged and rushed, contrasting with some of its beautiful backgrounds and scenery. When the composers ignite their Musik powers, the animation does pop out with a carnival-like flare and hypnotic tone, as it captures the beauty and wonder that the soundtrack is delivering. Character reactions are pretty spot-on, too, although the overall look has more in common with a Japanese kids' show rather than something for the older crowd.

Sadly, as what I have noticed with most subtitle-only Blu-Ray releases from Sentai Filmworks, the extras are somewhat lacking. However, although it only contains the clean openings and closing segments of the show, watching all the end themes without the credits is kind of a visual treat. While you will notice some similarities throughout them all, they all synch wonderfully with their respective songs and the episodes that followed.

The first season of ClassicaLoid is incredibly zany, but it knows how to have fun while paying respect to these musical figures. Although its animation can be rather hit-or-miss, what it achieves both story-wise and melodically is worthy of any encore performance. (It's no wonder it got renewed for a second season soon afterwards.) Heat up some gyoza, and prepare your belly and ears for the comedic magnum opus that ClassicaLoid delivers, though you may want to take some quick intermissions in-between to catch your breath from laughing so much.

Background Noise: Beethoven's Last Night by Trans-Siberian Orchestra - Like ClassicaLoid, the band known for "that one metal Christmas song we all know" took the concept of Beethoven and turned it on its head with their brilliant rock opera. The tale of Fate & Twist fighting off the devil to keep Beethoven's soul in tact, the story revisits the famed composer's past as he is nearing completion of his tenth symphony. Loud, epic, and wonderfully classical, it's kind of a surprise that Sunrise didn't give these guys a call to aid on the anime soundtrack.