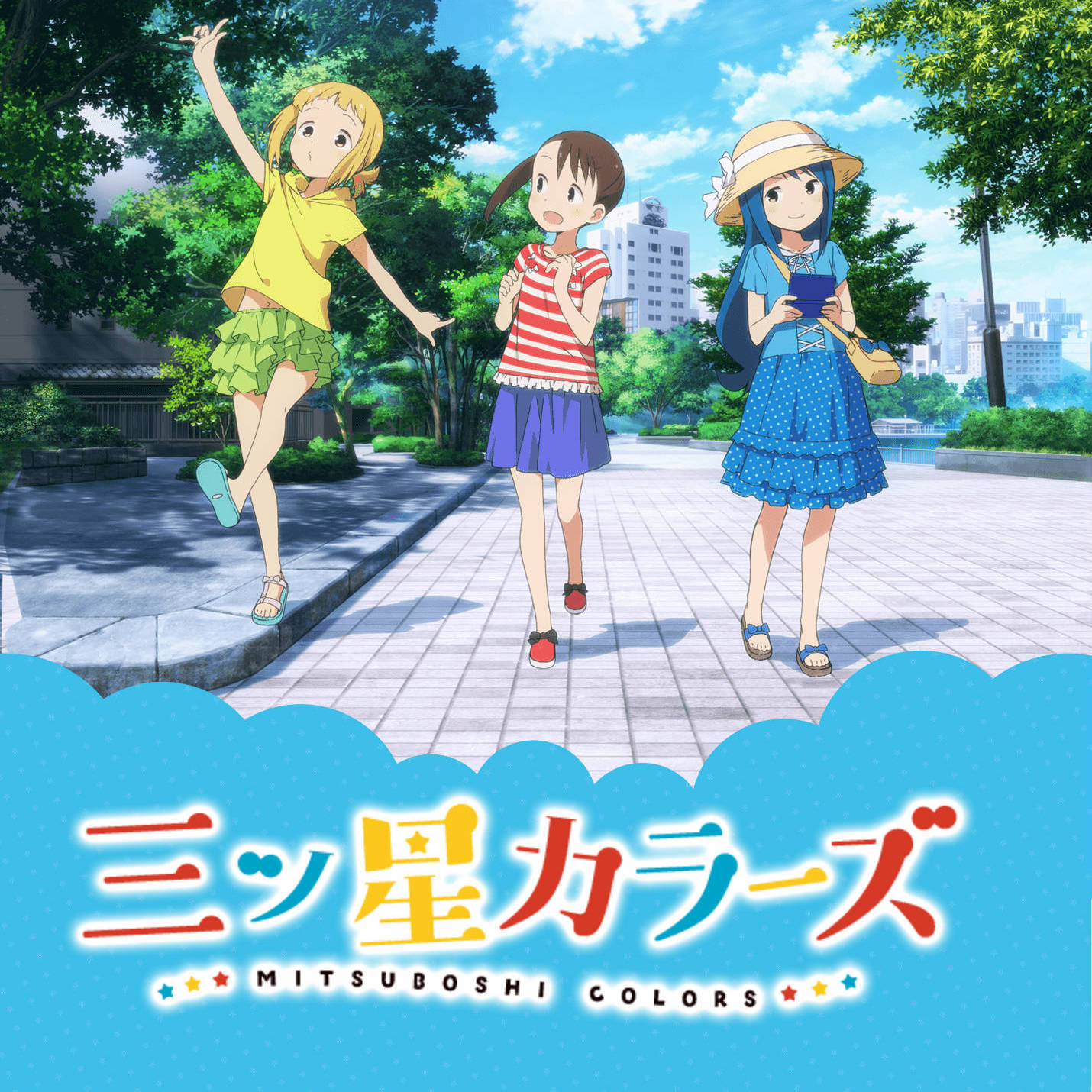 The power of a kid's imagination can bring much wonder and fun to their surroundings. Playing Cops & Robbers in one's backyard, seeking a hidden mystery in a nearby woods, or even digging for buried treasure at a local beach can make a child's mind evolve towards greater things. Perhaps this is why I have a soft spot for an anime like Mitsuboshi Colors, which greatly presents the magic that make-believe can conjure up.

Mitsuboshi Colors focuses on three young girls named Yui (Yuki Takada), Sat-chan (Marika Kouno), and Kotoha (Natsumi Hioka), who form a trio known as Colors. Along with their panda-like cat Colonel Monochrome, the kids seek out to uncover mysteries and complete tasks in order to protect the town they love. Whether it's cracking a safe, keeping a pond clean, or making sure their favorite animals at the zoo are being properly fed, the Colors will use all their willpower to make sure the day ends with a job well-done. Heck, even diffusing a bomb is no sweat for these girls! 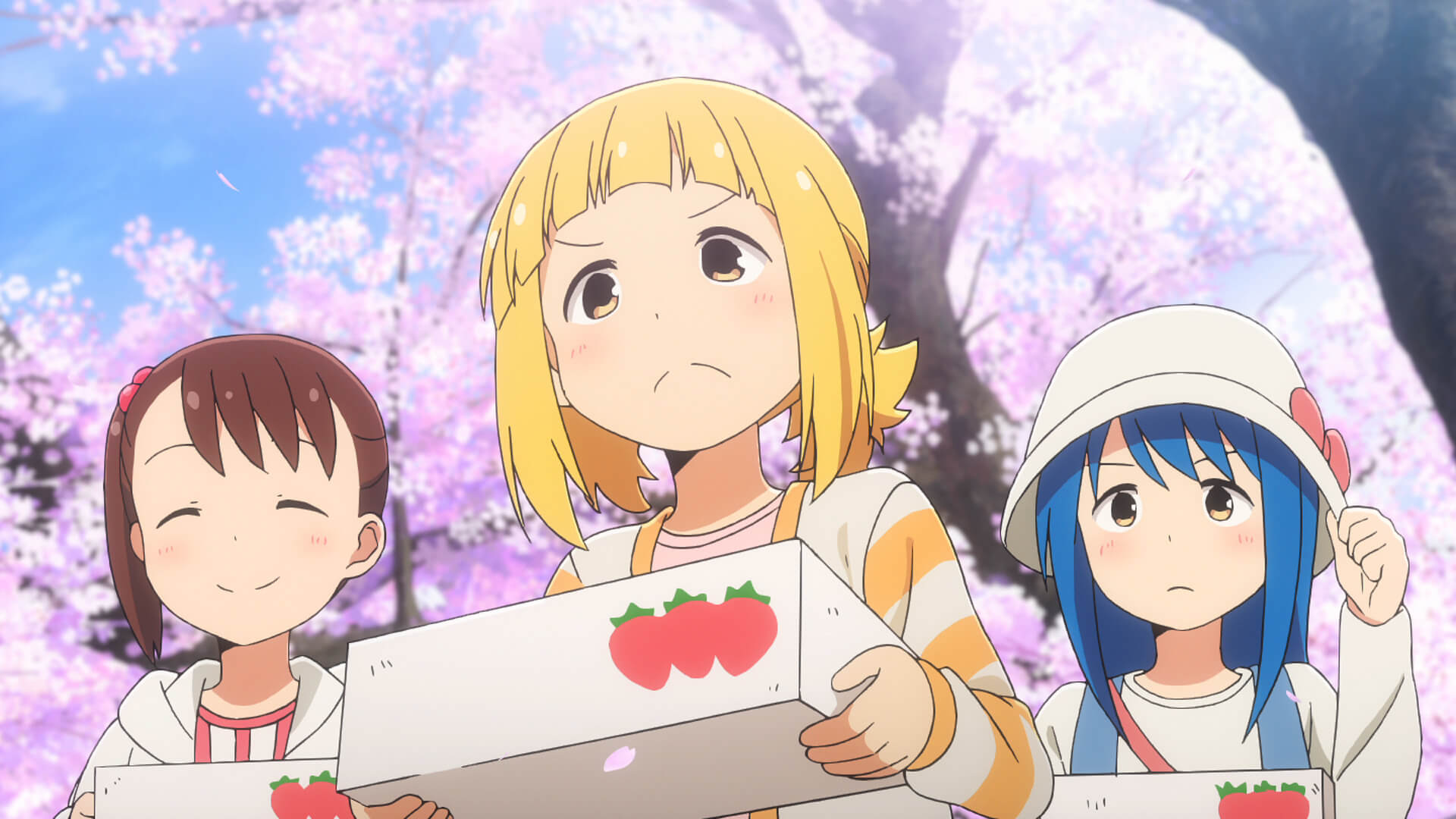 Of course, it should be noted that the Colors trio are playing pretend with their surroundings, as the lives of the townsfolk are never in legit trouble. Rather, what makes this anime fun to watch is how the citizens seemingly go along with the girls' antics with a smile. The sunglasses-wearing general store runner Pops (Tesshō Genda) often adds fuel to the imaginative fire Yui, Sat-chan, and Kotoha conjure up, giving them mysteries and hints to assist with their quests. Even the show's straight man Saito (Atsushi Tamaru), who tries to rain on the Colors' parade, often finds himself stuck in the fun these kids are having. Perhaps the best example of the town getting into their spirit is during a zombie game, where just about everyone the kids run into join in on their fun despite not knowing what's actually going on.

What also makes Mitsuboshi Colors a hoot to watch is how the girls' personalities are captured. There's Sat-chan's affixation with all things poop-related, Yui's timid mannerisms that make her not a strong leader, and the handheld-loving Kotoha, who is legitimately terrible at every single video game she's given. They act goofy with one another, get into fake fights, and -- most important of all -- build upon their respective imaginations to create one wonderful world of make-believe. Things rarely get too out of hand for them (although the antics they pull on Saito could get one of them arrested here in the US), so it's nice to see a series showcase how a kid's imagination works toward a bigger goal.

A lot of the credit to the personality of these kids certainly go to the voice cast, who managed to bring a lot of youth into their roles. Kouno's Sat-chan captures the spirit of an energetic child wonderfully, exploding with glee when it comes time to throw around a punchline. As the more timid Yui, Takada presents a kid who still has an unsure feeling, even within the depths of their playtime. Hioka brings a deadpan personality to her role of Kotoha, breaking that sternness when it comes time to punish her friends (mostly Sat-chan) with a laugh-a-plenty reaction. A special nod certainly goes to Genda's turn as Pops, who often delivers a fatherly figure-like essence with a touch of rekindled youth into his portrayal.

Silver Link (Tanaka-kun is Always Listless, Non Non Biyori) certainly puts the "colors" in Mitsuboshi Colors, with their attention to the personality of the kids and fellow townsfolk. Each character is brimming with life in every frame, as the youthful aspects of the kids and even the adults is showcased with much detail placed into them. On the other hand, the worlds can be a mixed bag depending on what the studio decided to do for each scene. While I like it when they drop the characters around real-life settings, the drawn-in areas lack the sort of care that the people of the show are given. 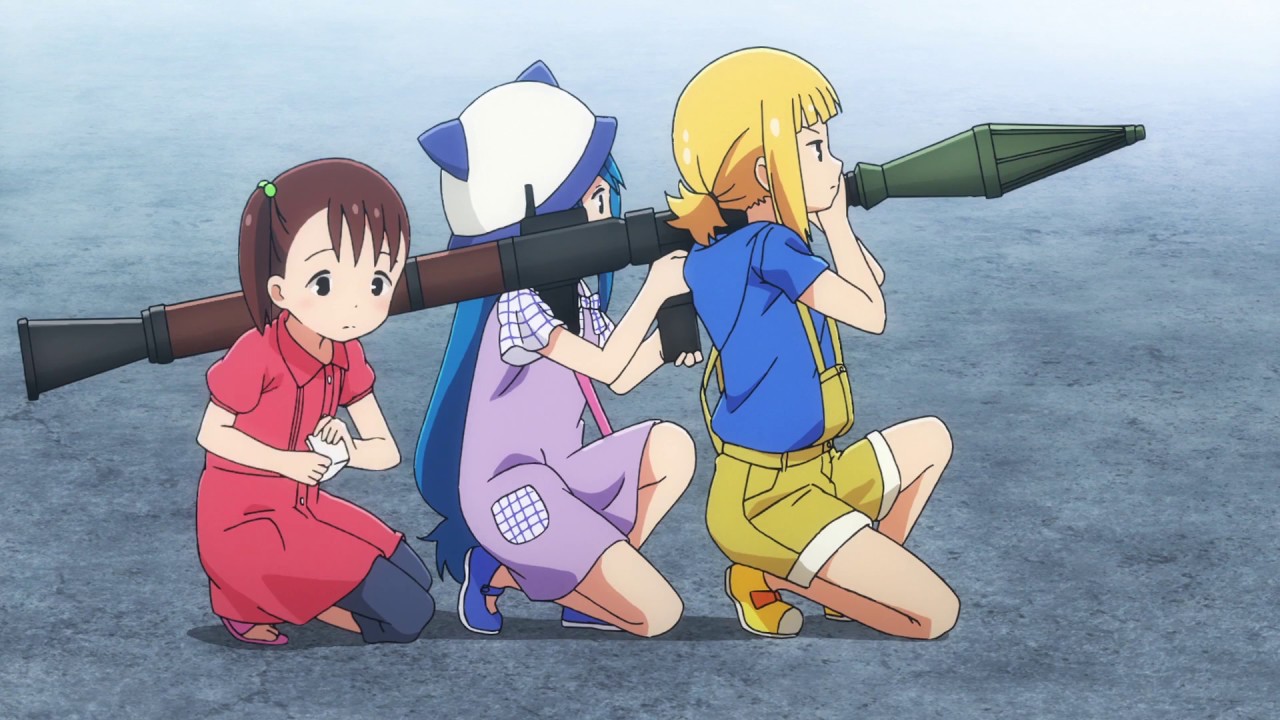 Although her soundtrack contribution isn't on the epic scale as her work in Izetta: The Last Witch, Michiru instead showcases works that fit more with a child-like mindset. Often, they can be compared with the sounds of a music box or even toy piano, which fits well with the imaginative personalities of the Colors. The three main cast members perform the opening and ending themes surprisingly well, with the poppy OP "Colors Power ni Omakasero!" delivering a youthful approach towards inviting others into their land of make-believe. However, it's the closing song "Mitsuboshi Colors ☆ Honjitsu mo Ijō Nashi" that winds up being the more memorable of the two, thanks in part to its Ragtime-styled jazz melody.

There's a certain level of joy that Mitsuboshi Colors achieves in its twelve-episode run, one that captures the youthful spirit and blends it with a world in need of imagination. While there are no moral lessons to be learned here, nor are there any sort of consequences for the girls' crazy shenanigans, this anime more about delivering some good ole innocent fun with a sprinkling of mischief. It's why I can easily pair this with a series like How to Keep a Mummy when it comes to Winter 2018 anime to show to younger audiences, especially when it comes to presenting something wholesome for all to enjoy. Needless to say, a show like Mitsuboshi Colors could do some good for any person in need of a dose of pretend time.

Mitsuboshi Colors can be viewed on HIDIVE, and has been licensed by Sentai Filmworks. Episodes 1-12 were observed for this review. Promotional consideration provided by HIDIVE.