HomeAnimeMANGA REVIEW | A "Distant Star" As Powerful As An Endearing Heart

MANGA REVIEW | A "Distant Star" As Powerful As An Endearing Heart 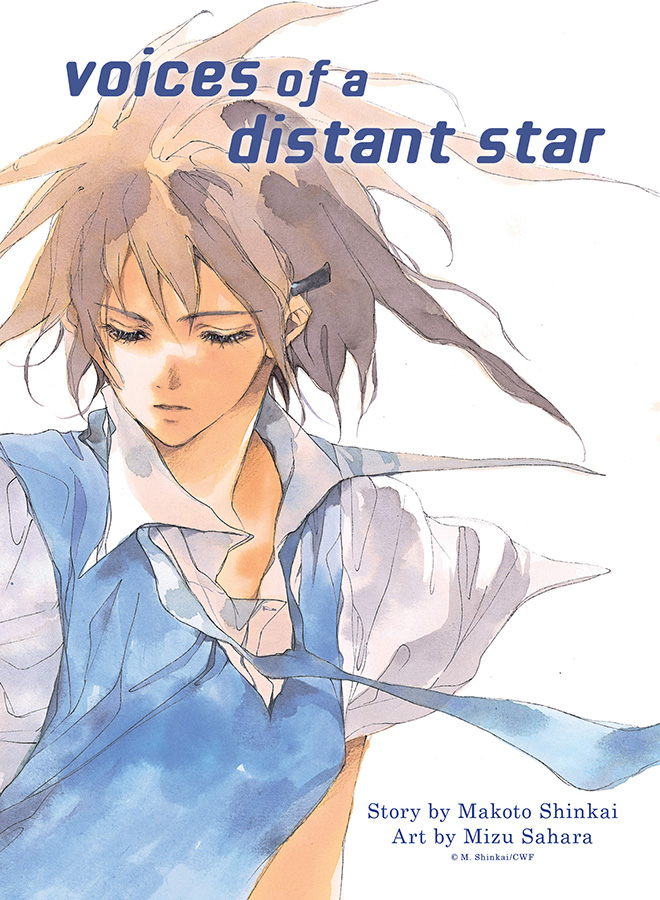 MANGA REVIEW | A "Distant Star" As Powerful As An Endearing Heart

While She and Her Cat first opened the anime world to his work, it wasn't until Makoto Shinkai's 2002 short Voices of a Distant Star came out where even the bigwigs of the industry started to take notice. Made mostly by himself, the film was met with much critical acclaim, opening the door for Shinkai to craft the motion pictures that he's now known to bring to audiences across the world. However, Voices of a Distant Star carried enough popularity to not only spawn a light-novel adaptation, but also a manga that tinkered with the story here and there, which has found itself being republished many years since it's been out-of-print.

Illustrated by Mizu Sahara, Voices of a Distant Star focuses on two students nearly thirty years into the future. Mikako is chosen to pilot a giant robot called a Tracer, forcing her off of Earth and into the heat of battle against an alien race known as the Tharsians. While this is occurring, her close friend Noboru is living his life as an ordinary student, with the two chatting back and forth via messaging. Due to the distant between one another, the further Mikako goes, the longer it takes for messages to be received. As this gap grows, Noboru wonders how much of a chance he'll have to see Mikako again. 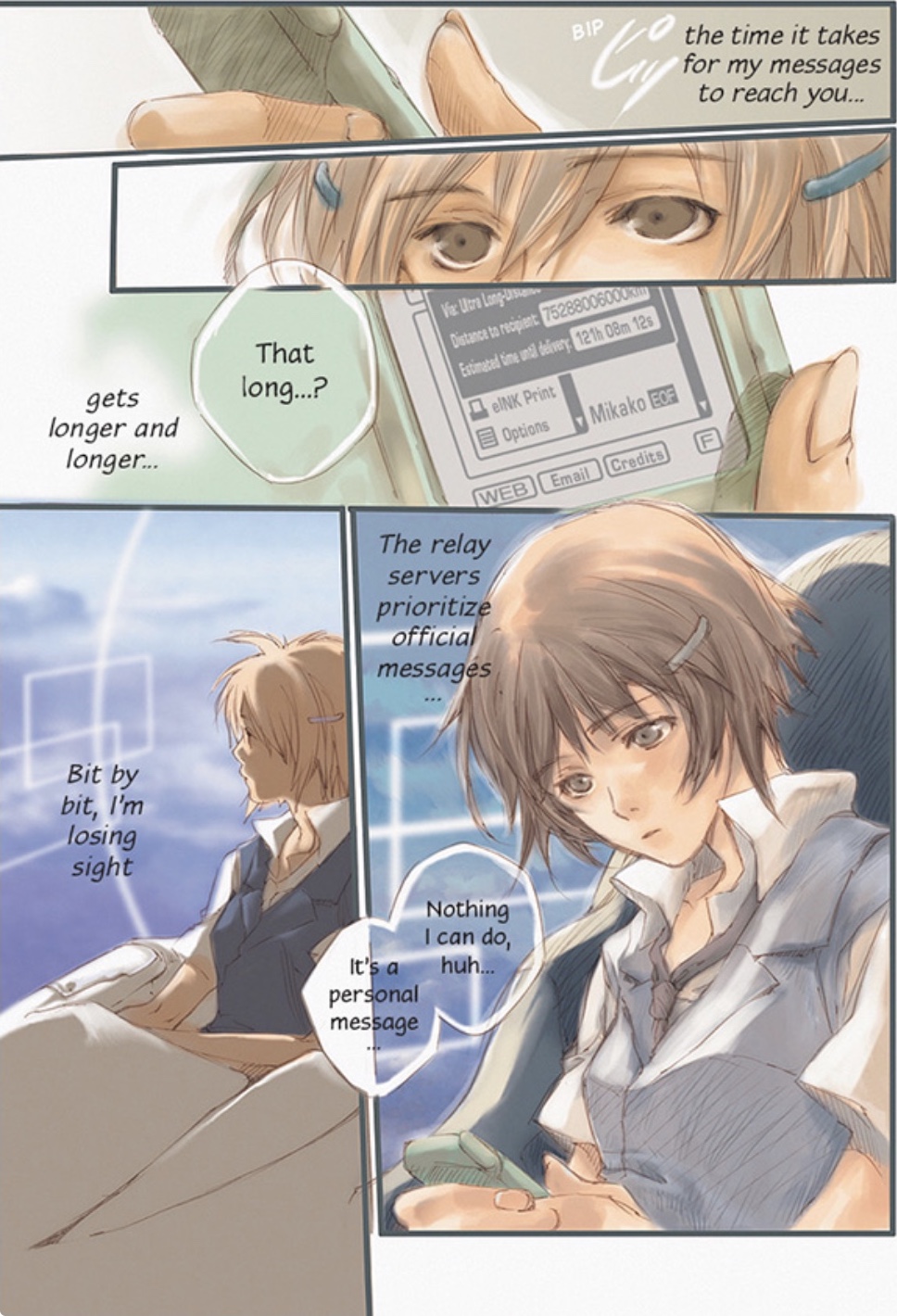 What makes Voices of a Distant Star stand out in its manga form is its expressive means of showcasing teenage frustration. Shinkai's story is perhaps one of the most extreme versions of the trials & tribulations of a long-distance relationship, as the two of them grow to realize their feelings for one another as Mikako travels further away from Earth. It's interesting to see how, despite how much they literally drift apart, their growing hearts seem to overshadow the distance that's been placed between them. Even when the story seems to overflow with angst between Noboru and Mikako, it's still presented in a very relatable light.

Sahara's depiction of Shinkai's original work is presented via a heartfelt tale about the strength a bond has between two people. How it ends may divide fans of the original short (which, spoiler alert, has a somewhat tragic conclusion [highlight to reveal]), but it does a fine job with giving its readers a strong message on the power of hope. Despite Mikako and Noboru growing differently via their forked paths, that fabled red ribbon of fate somehow keeps pulling them back together in some fashion, even if it's just something like an email that might take months -- even years -- to reach the other person. 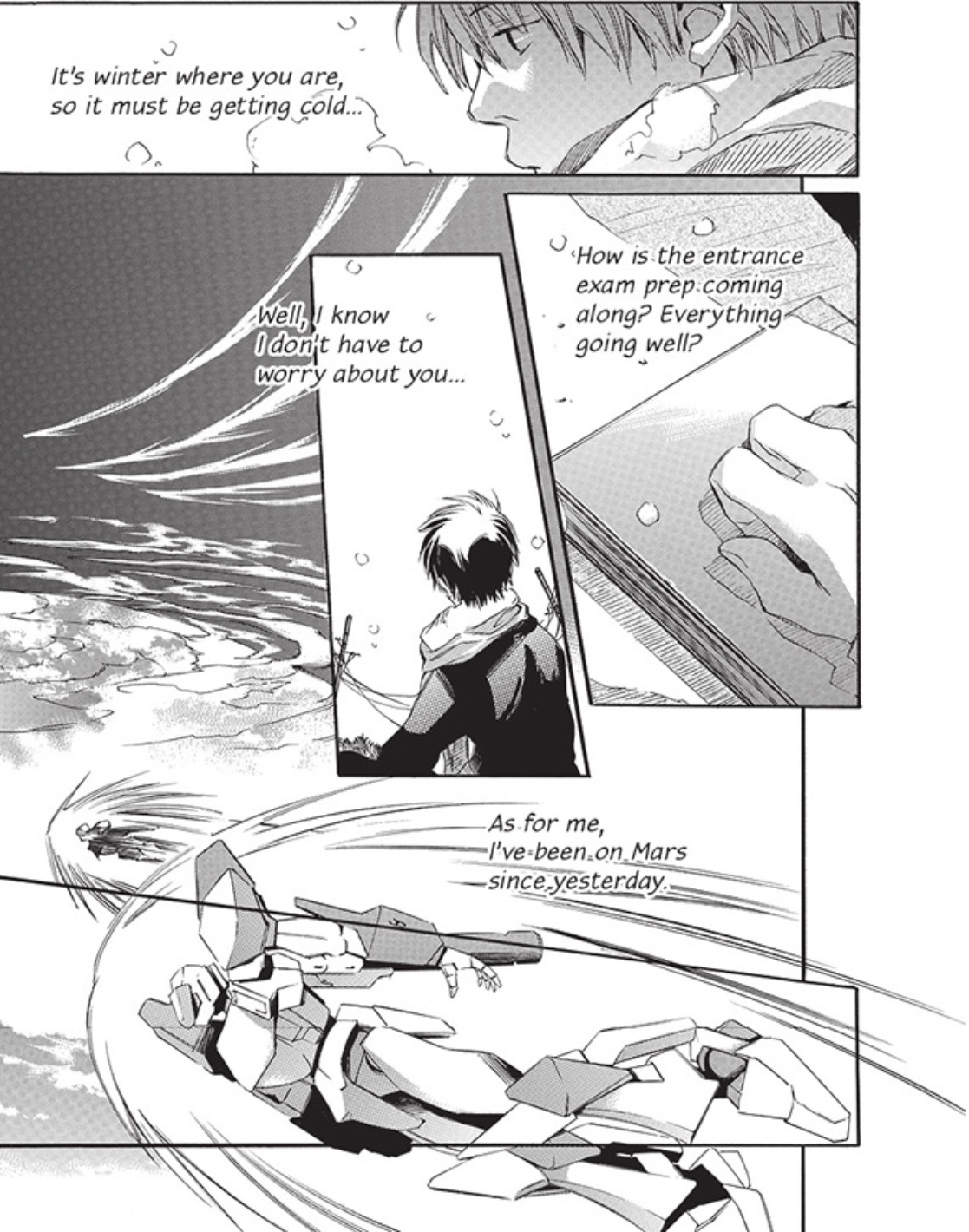 When it comes to Sahara's art direction in the manga, she stays true to the vision that Shinkai crafted in animated form. The characters are presented with much emotion, with some fine detail in their body structure and active movements. Both worlds of these characters -- Earth and the place beyond our atmosphere -- are somehow brought in manga form in a way that showcases both closeness and vastness of the universe that we're all part of. Where Earth is filled with life and pretty-looking nature, space itself has this way of being shown as being dark, big, but also surprisingly brimming with its own sort of beauty. As for the designs of the Tracer robots, they tend to be somewhere between old-school Macross and Eureka Seven's Nirvash, albeit with a sadly realistic lack of flare.

Despite some of its changes, Sahara's adaptation of Shinkai's Voices of a Distant Star is a strong, relatable tale that showcases the strengths of hope and romance. Although there are a couple elements of the story that haven't aged well (especially when it seems they didn't know how certain cell phones would evolve in such a short span of time), the story still feels just as fresh as it did over fifteen years ago. Even if you may feel iffy about how it ends compared to the original anime short, this manga adaptation of Voices of a Distant Star will easily find its way into your heart.