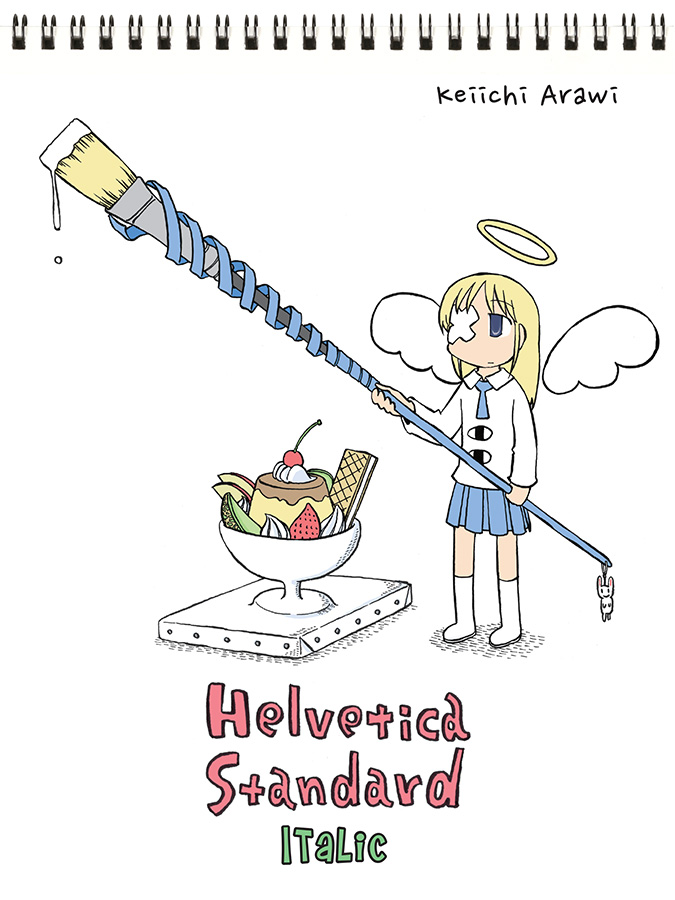 Keiichi Arawi has a knack for blending charm, adorability, and some way out there kind of humor into his works. His popular nichijou series gave way to some of the most beloved non sequitur comedy throughout Japan, reaching worldwide audiences' hearts & funny bones with the aid of Kyoto Animation's brilliant anime adaptation. From 2006-2014, Arawi also contributed some silly shorts to NewType Magazine in the form of Helvetica Standard, which also popped up here and there in the nichijou anime. The second collection of these shorts, dubbed Helvetica Standard Italic, not only ends the run of these comics, but also provides a look behind the thought process of Arawi himself.

Once again the familiar faces of Helvetica Standard appear in these shorts, with random encounters with angels Pino & Mono-Eye, Ms. Arama, and a couple appearances from the girls of nichijou. Unlike the previous volume, this collection can be rather dark with its humor, which may take some readers by surprise. (A strip about a game of Russian Roulette, while funny, feels more in place with a Tony Millionaire comic rather than Arawi's work.) Thankfully these moments are few and far between, with a good dose of the comedy being more in the lighthearted fare that fan will be more accustomed to.

Unlike the previous volume, the humor tends to lean towards the worldly rather than straight-up Japanese. There isn't much in the way of having to be knowledgable about folklore and customs, instead relying on more punchlines, blunt talk, and visual gags. While it's tough to say whether or not it can be considered relatable by any means, what makes these shorts (not to mention Arawi's work in general) is that it steps way out of bounds of reality to present a great escape from the tougher, more sensical world. Gags involving horoscopes, cat ladies, and the best way to take on a certain hockey mask-wearing killer will no doubt have you laughing out loud.

The bonus material is where the true gold of this collection lies. Included with Helvetica Standard Italic are the complete sketch collections for the original nichijou Blu-Ray/DVD releases, with Arawi going into deep detail on what inspired their looks and visual styles. The sponsor drawings, used during the nichijou anime to show who's helping fund its airing, sometimes include little short stories, including scenes with the Go/Soccer Club and Professor & Sakamoto that will have you smirking with warmness. Perhaps the most eye-catching of all are the illustrations made for magazine commissions, with the attention to detail in the "Blue Bird Series" being some of Arawi's most beautiful work to date.

More stories about Arawi's past are featured, with a childhood tale about Satocchan bringing up old memories of collecting cards called Surprise Men, with the rarer one making kids king of their classmates. The best tale involves Arawi's second assistant Ori, with a random conversation to cut the tension resulting in the assistant revealing something that surprises the author. Whether or not he was joking isn't revealed (because Arawi is too embarrassed to ask), but the tone is presented in a nice, humorous way. A bonus tale about a made-up friend named John Mark Ware also brings forth not just a good dose of humor, but also a level of philosophy that's never been reached in any of the author's main works.

Helvetica Standard Italic once again showcases the brilliance that Arawi has offered throughout his career. While his style of comedy isn't quite for everyone, it does offer a level of artwork that just about any person could enjoy immensely. While it's sad to see this series reach its end, at the very least we've got the author recent work CITY to look forward to in the not-so-distant future. Until then, give your eyes and brain some of this Helvetica Standard candy to savor on for awhile.