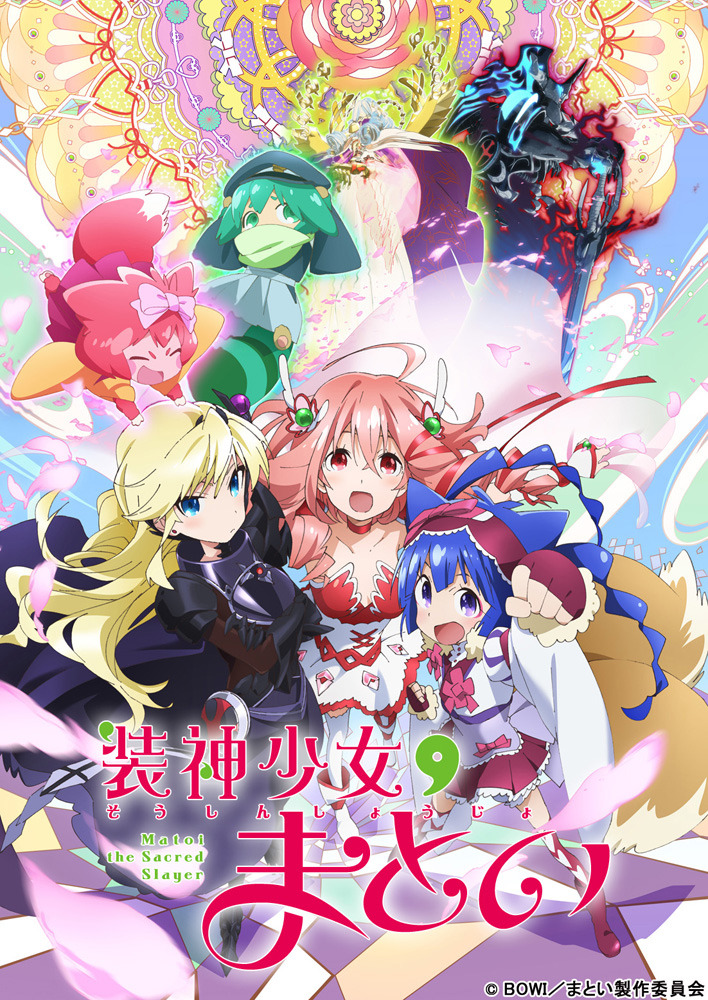 When was the last time a magical girl anime left me feeling good after it was over? This question popped into my head as soon as the credits rolled and the title screen flashed at the end of Matoi the Sacred Slayer. Since being hit with both Puella Magi Madoka Magica and Magical Girl Raising Project, the mahō shojō genre has come to be a place where I expected cute characters to die horribly while some philosophical messages were subliminally shot into my brain. I worried the same was about to happen when I started to watch this new series from White Fox (Akame ga Kill!, The Devil is a Part-Timer!), only to be rewarded with an outcome that gave my mind and heart a nice sigh of relief.

An original anime from scriptwriter Yōsuke Kuroda (Tenchi Universe, Honey and Clover), Matoi the Sacred Slayer puts its focus on the title character (Ayaka Suwa) and her close friend Yuma (Naomi Ōzora). They spend their time working at Yuma's family's shrine, as Matoi is starting to get used to living once again with her dad Shingo (Hiroki Tōchi). Her normal life is flipped upside-down when the shrine is attacked, and a strange deity embodies her during Yuma's failed attempt at Divine Possession. The powers of a god are granted to Matoi, with her transforming into a magical girl destined to fight evil spirits. 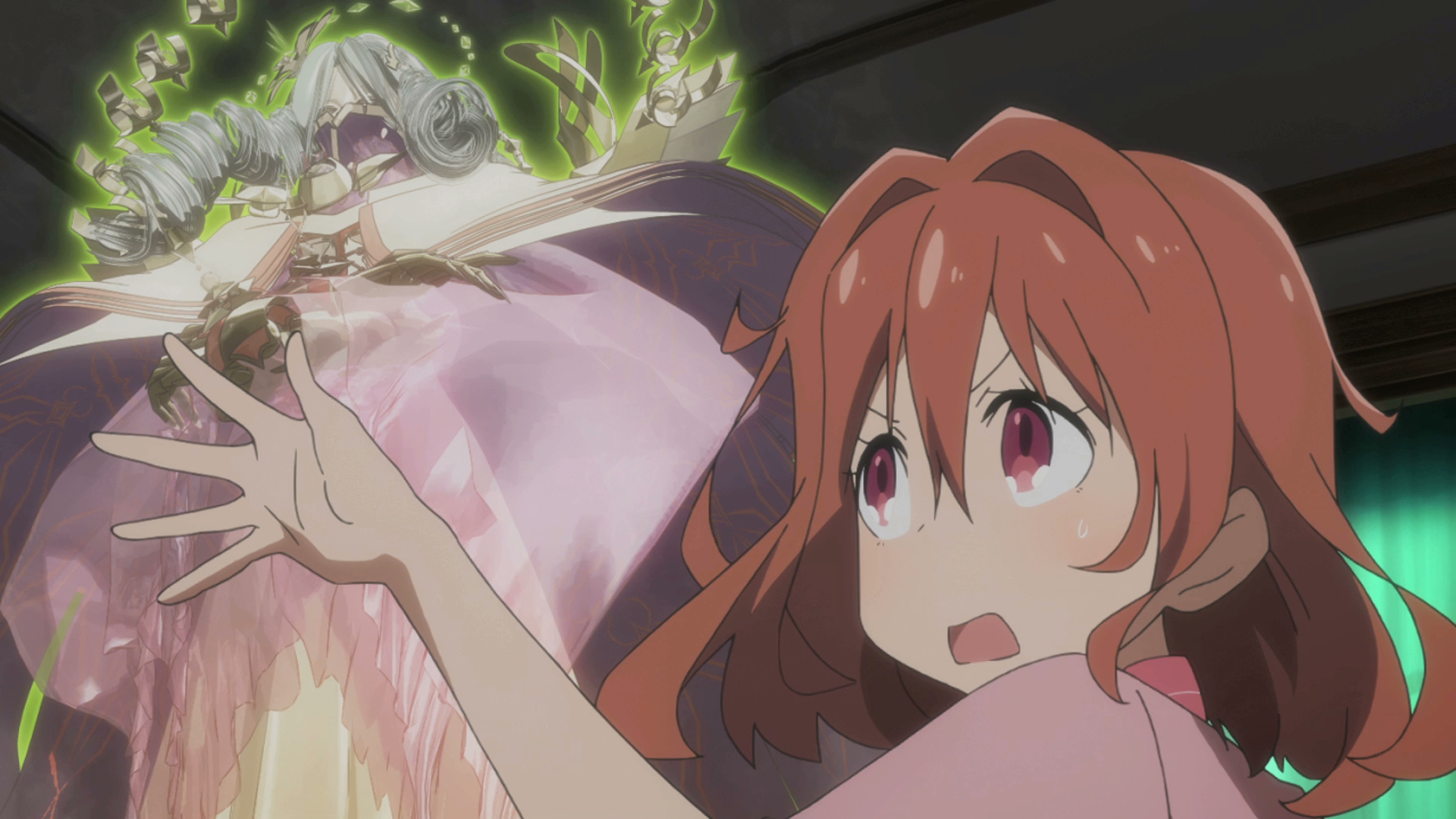 Things get a little more crazier when other organizations dive into the battle between good and evil, with special agent Haruka (Ayako Kawasumi) investigating the demonic entities known as Nights and the Vatican's secret service member Clarus (Haruka Tomatsu) defeating possessed beings known as Creeds. It's soon revealed that Matoi's long-disappeared mother Shiori (Yuki Kaida) was also responsible for protecting the world from the evil dimensional creatures. As more creatures appear and bigger battles are fought, Matoi's wish for a normal life with her parents becomes quite the difficult task.

One can easily see how important it is when Matoi starts to battle without being coaxed by the powers that be. When she sees the kinds of dangers those near and dear to her could be in, it becomes a fight to bring not just her life back to normal, but the rest of the world's. What's more she realizes the heaviness that her father has felt since Shiori vanished, with Shingo worrying that the same fate will fall upon his daughter and leave him helpless and alone. However Matoi the Sacred Slayer plays off the classic wish-making trope throughout the story that acts as a bright beacon of hope for an outcome that doesn't require a life-altering sacrifice. 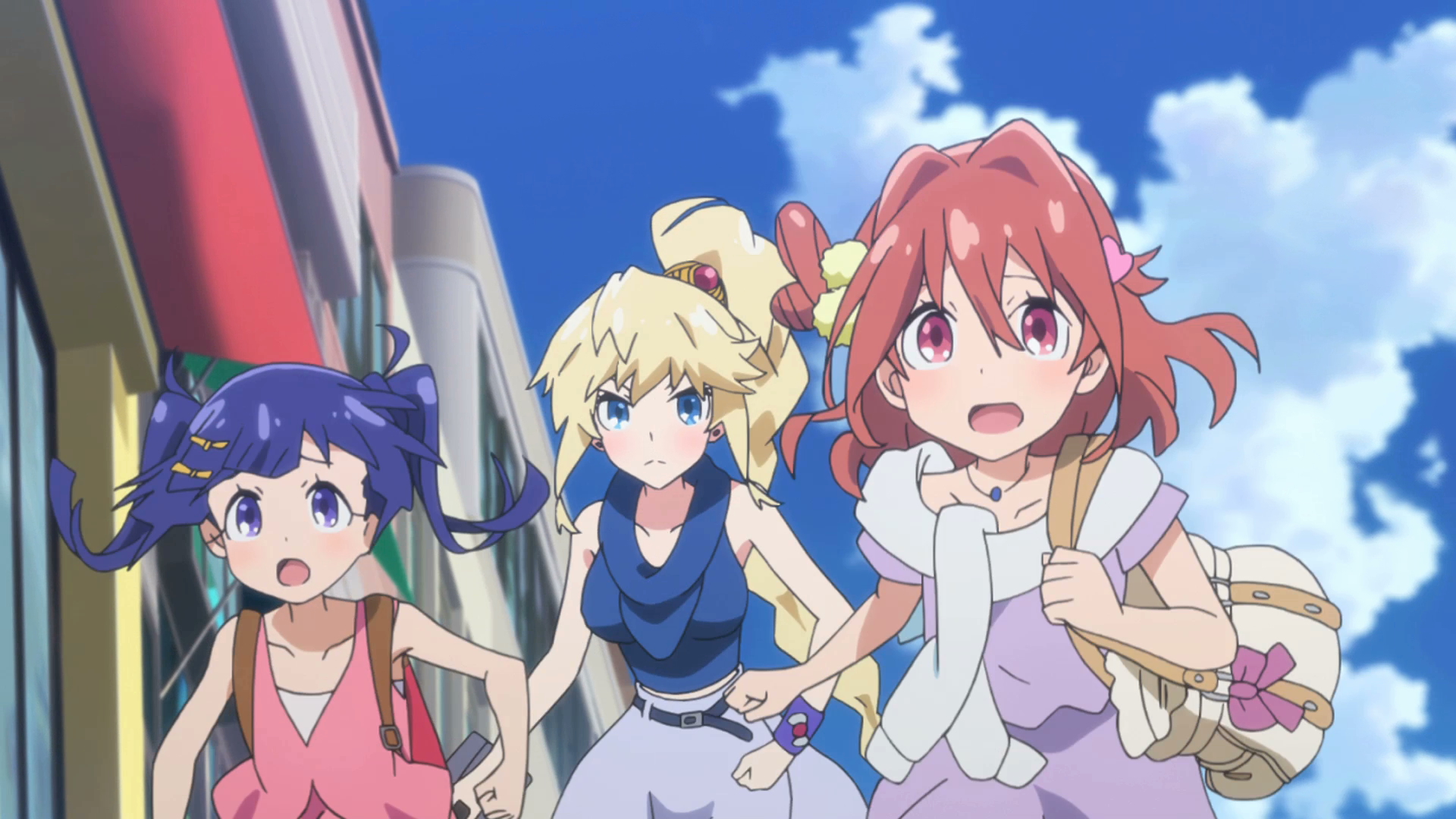 A lot is crammed into this twelve-episode series, with loads of exposition thrown in here and there to somewhat give reason for the more confusing elements. At times it can come off as slightly rushed, but considering this isn't based off of a light novel, manga, or other form of entertainment, it's understandable why they had to do such a thing. (A part of me feels like this anime could've been expanded into twenty-four episodes to loosen some of the weighty backstory.) Nevertheless it doesn't shy away from the importance of the title character's part in this whole fight, with her maturing as a character in a solid progression.

Some may roll their eyes with the Deus Ex Machina sort of ending Matoi the Sacred Slayer offers, leaving complicated matters solved with a snap of one's fingers. As for me, I saw it as a nice change of pace within the forest of heartstring-tearing and emotionally scarring finales that seemingly made their way into this once-adorable genre of anime. In this moment of time where positivity is desperately needed, seeing Matoi, Yuma, and Clarus's tale end with sunny skies and dreams of tomorrow's future is quite welcoming. 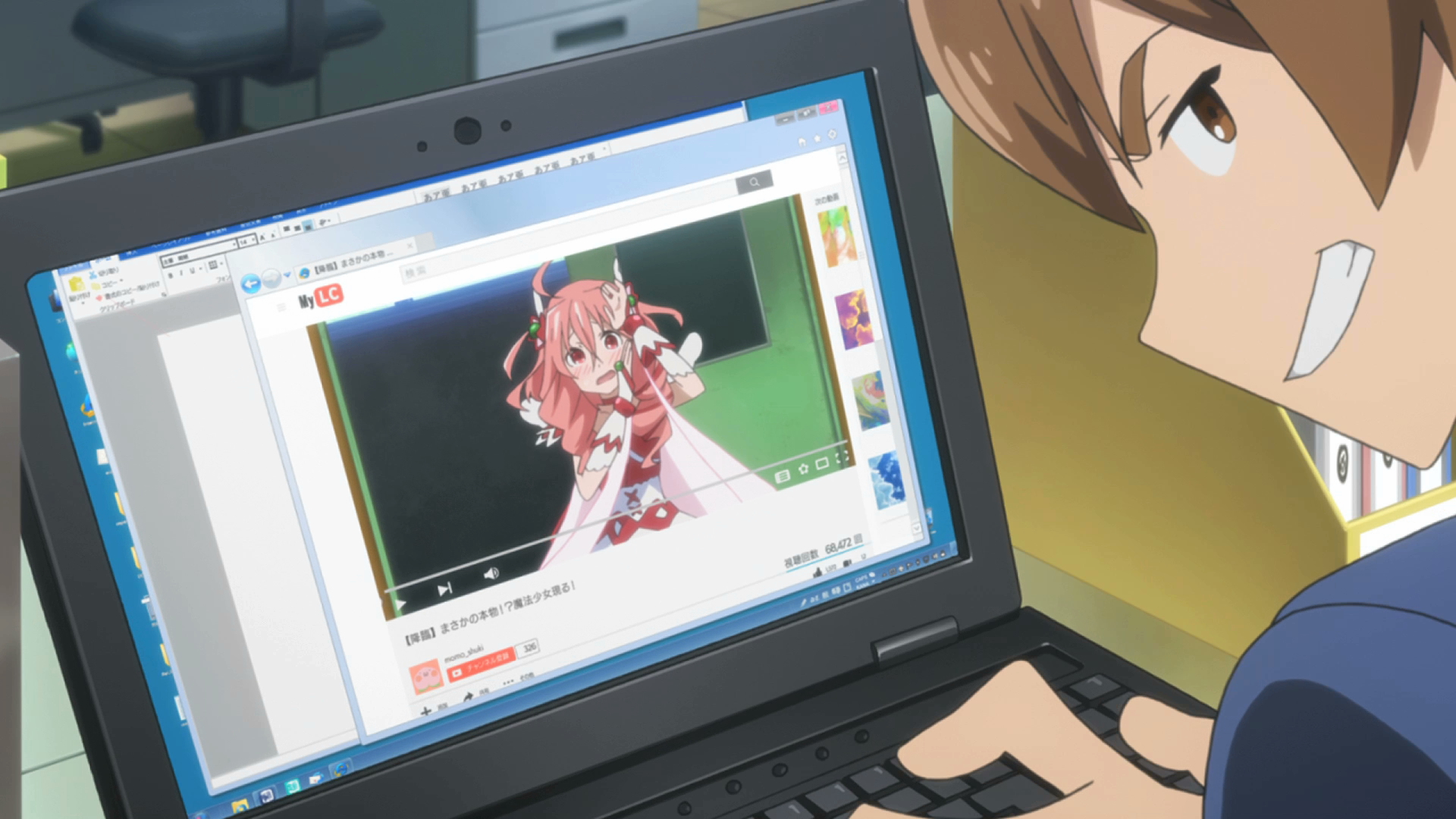 Outside of the more serious elements, this anime also knows how to get some good laughs out of these characters. The fact that Matoi loses her clothes every time she reverts back to her normal self results in some of the better reactions from the heroine, pleading to those around her to not post anything online about a streaking girl. (Of course, this inadvertently makes her a YouTube sensation.) Yuma's attitude throughout the series also plays for some great hilarity, with her wanting to become a famous shrine girl and hero for all to enjoy. She even throws in some fourth wall-breaking gags, with one side-splitting comment regarding how many new viewers will tune into the anime when they see Matoi in a revealing gym outfit.

White Fox's animation in Matoi the Sacred Slayer is hard to judge. It's not bad by any means, but it's rather choppy in places. While it shows some high quality moments during action sequences, the flow of the rest of the series comes off a tad bit cheap in the slower parts of the series. (I noticed some blobby animation towards the end of the show's run, with characters' faces and bodies emoting like putty.) With that being said they did a fine job with the more cutesy elements, especially when you see Matoi embarrassed by her predicaments or Yuma excited over fighting Creeds and Nights. 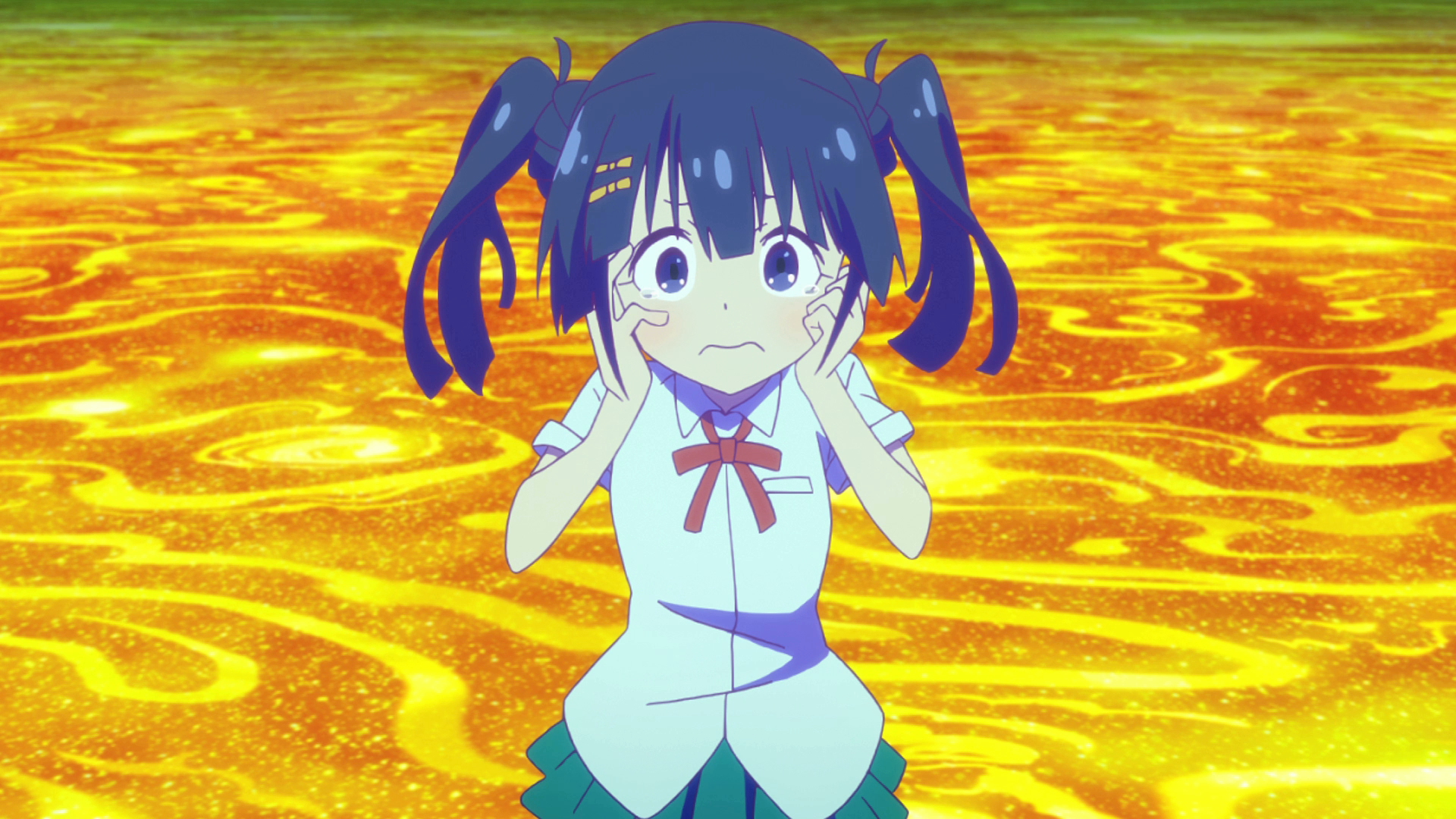 It's always a good sign when it sounds like the voice actors are having a blast recording their lines. Suwa's Matoi captures the attitude of a panicky young girl given something extraordinary, evolving as the series progresses into a hero who wishes to keep the world safe. In the role of Yuma, Ōzora plays the comedic fodder with a likable bratty attitude and a solid dose of positivity. The literal father figure Shingo is handled by Tōchi with care, concern, and the confidence needed to believe that all will be okay with him and his daughter in the end. Meanwhile Tomatsu's Clarus starts off as rather stoic, but shows a nice dose of personality when the character begins to accept the help from both Matoi and Yuma.

Various genres are present in the score by Tatsuya Kato (Masamune-kun's Revenge, Food Wars), with epic battle songs and comedic melodies transitioning from one to another surprisingly seamlessly. Opening theme "Chōmusubi Amulet" by Mia REGINA is a powerful blend of epic rock and traditional Asian string accompaniment, setting viewers up each week with what's to come in the action department. Toning things down in the end, voice acting unit's Sphere's "My Only Place" is a quiet R&B track that's nice and calming, but for some reason it doesn't quite feel as appropriate as it should be for this series.

Matoi the Sacred Slayer may not be the best magical girl anime to grace the small screen, but it's hard to deny its enjoyable factors. Balancing action, drama, and cutesy comedy in equal shares the tale of a girl desiring pure normalcy in an anarchic world is a good break from the more depressing mahō shojō series of recent memory. Share pics, post video, and absolutely Tweet about Matoi the Sacred Slayer if it fancies you as much as it did me.

For extra features, the Blu-Ray contains your run-of-the-mill collections of Japanese commercials and clean opening & ending animations, as well as a recap episode that's narrated humorously by Yuma. However the real treat is the "Night Busters, Inc." OVA, a bonus episode that catches up with Matoi since freeing her mother. Things are still far from normal, with Matoi getting irked with her parents acting lovey-dovey all the time. Suddenly she is pulled into a new exorcist job by Yuma and the rest of the crew under the Night Busters name. What follows is 23 minutes of pure hilarity that pays better homage to Ghostbusters than the 2016 reboot film, while at the same time throwing jabs at the idol industry, Donald Trump, and the ridiculousness of the series as a whole. If you enjoyed this series, then the bonus episode alone is worth grabbing the physical release.

Matoi the Sacred Slayer can be viewed on HIDIVE and Hulu, and has been licensed by Sentai Filmworks. Episodes 1-12 were observed for this review. Promotional consideration provided by Mike Bailiff of Section23 Films.

Background Noise: Humanz by Gorillaz → Wonder what I listen to while I write my reviews? From here on out, I'll be showcasing the records and the like that fill my eardrums as I type away these articles for your reading pleasure. As this was a piece on Matoi the Sacred Slayer, the latest album from Gorillaz helped to bring out the concepts of hope and fun in a chaotic world that was showcased in the anime. If you wanna listen for yourself, simply click the album name and give it your money! (Special thanks to Robert "TheDCD" Workman for the name suggestion. Be sure to check his writings on WWG and hear him on Another Retro Gaming Podcast!)