HomeMusicMUSIC REVIEW | Aeronauts In the "Now" on Latest Mini-Album

MUSIC REVIEW | Aeronauts In the "Now" on Latest Mini-Album 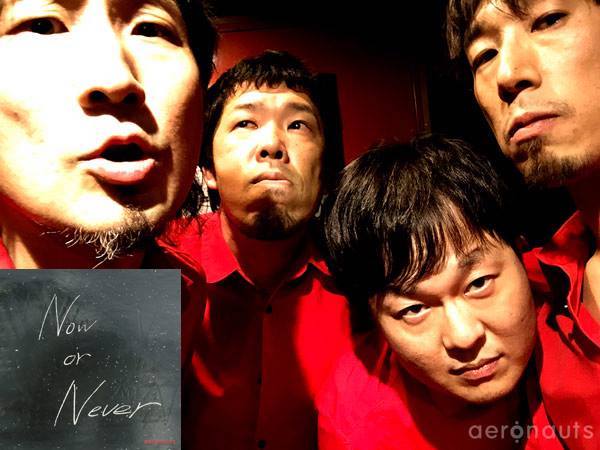 MUSIC REVIEW | Aeronauts In the "Now" on Latest Mini-Album

Since 2003 Aeronauts have been making waves in the Japanese indie rock realm. With their punk status quo and alt-rock persona, the Tokyo-based quarter has made it their mission to melt the faces off of every crowd they play to. This sound is very evident in their six and latest release Now or Never, which showcases the band's loud & proud motif.

Opener "Grace" pushes through the boundary, bringing forth a late-night party vibe powered on cheap vodka and good vibes. Vocalist/guitarist Gendai Matsuyama screams and bellows with all his might, making sure everyone's wide awake and ready to throw down. "Drop" continues the headbanging mentality with a song perfect for those quick highway drives with the convertible top down. Those missing the era of Thee Michelle Gun Elephant may wanna take a listen to "Siren," what with its fury of clashing drums from Ieyasu Kitade and hyperactive guitar-playing from Matsuyama and Tomowo Morikawa.

Coming in like a hurricane, "Ghost" takes a poppy chorus and engulfs it with a hard-rocking melody and crazed mindset. Closing track "Never Glory" is a lost Strokes classic dipped with an Asian-flavored fusion. It's here where Kitade bangs away in the spirit of classic punk, with bassist Arata Ikemoto plucks away with sheer determination and violent volume.

Now or Never is Aeronauts at their most fast-paced. With the right sort of off-the-wall mentality, the Japanese rockers keep the sound at max volumes with their killer melodies. If you're a newcomer to the Aeronauts sound, Now or Never is a great way to dive into their rampant style.