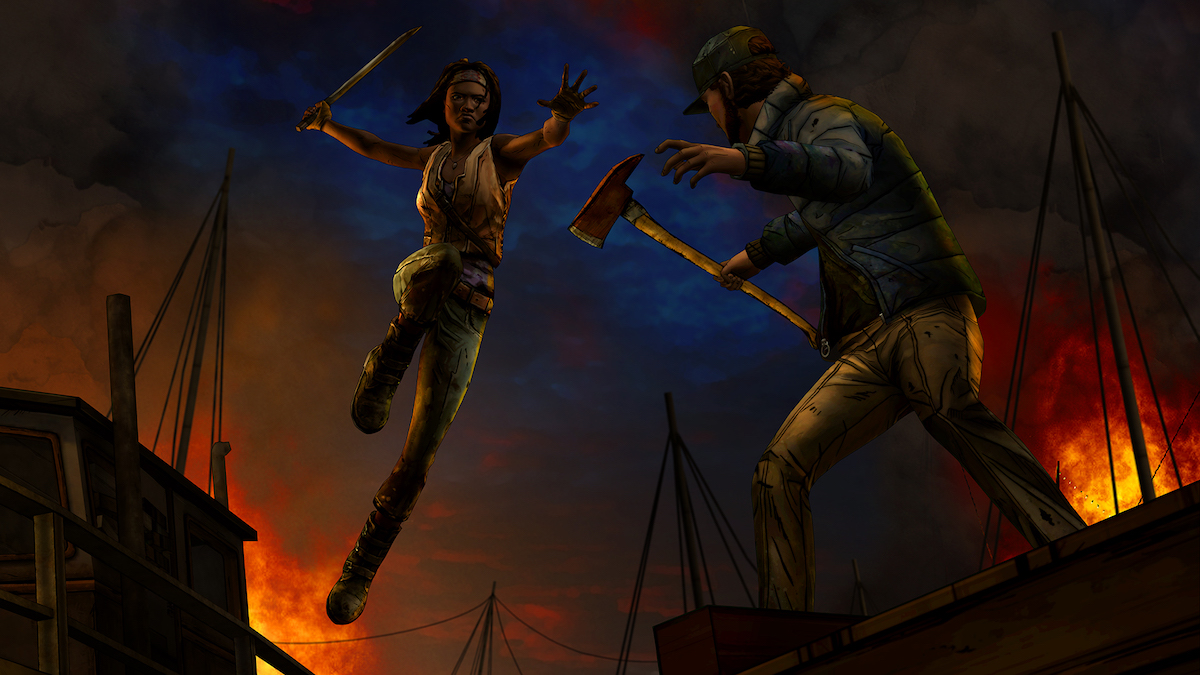 Why does Telltale Games' The Walking Dead keep on reminding me that a post-apocalyptic life is one that keeps you eternally cornered? Walkers to the left, dishonest people to the right, and in the middle are the good folk that get either eaten or hurt because of your actions. It's enough to make you wanna crawl into bed, get under the sheets, and position yourself into a fetal position until the nightmares go away; mind you, said nightmares never do when zombies are involved. The second episode of The Walking Dead: Michonne is another reminder that your world can go to shit just when a moment of reflection falls onto your lap, and boy does it force you to make some tough choices.

With Greg dead, Michonne and Sam try to find their way out of Norma's clutches, with or without Pete tagging along. Once out of the frying pan Sam takes Michonne back to the island where her family lives, only to come across Walkers in the front and Norma's men in the back. Escape becomes the only choice they can make, so with a cunning idea they decide to hightail it toward's Sam's house, but when things go awry Michonne must find away to pull together some new allies whilst holding together her own sanity. 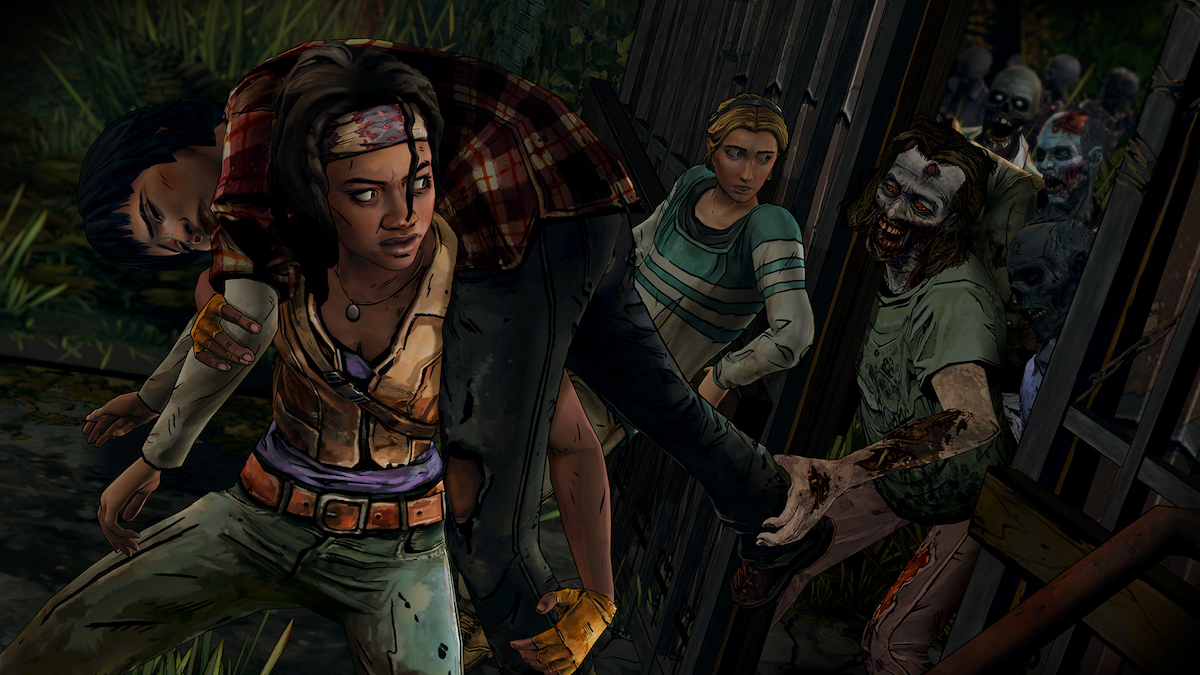 Perhaps what "Give No Shelter" accomplishes best is the ability to emphasize the importance of both freedom and survival, and in the world of The Walking Dead these elements rarely go hand-in-hand. To be free is to become food for the undead; to survive means to sometimes find yourself captured by yourself or others. The character of Michonne showcases these two aspects very well, as any moment of calm serenity is quickly taken away by either the living and dead. Even when she flashes back to when her daughters went missing the game likes to remind you that a moment of reflection can push you towards a dangerous place.

The concept of trust is heavily emphasized in this chapter, not to mention how those that put their trust in your hands can easily be taken away. Seeing a character being shot and fixed up on limited first aid supplies can be a little nerve-wracking, and watching an enemy being held tightly by a vice would make anyone cringe at its sight. Then it's that moment of getting to know a character, seeing them help you make a plan to help one another out, and then being slapped in the face with the harshest of realities as the plans fall from your fingertips. I don't know whether to be aggravated by the sight of lost hope around every corner or tantalized by the idea that another twist will be coming my way at any given moment. Whatever it is, I love that Telltale Games knows how to push my buttons in ways that both please and annoy me. 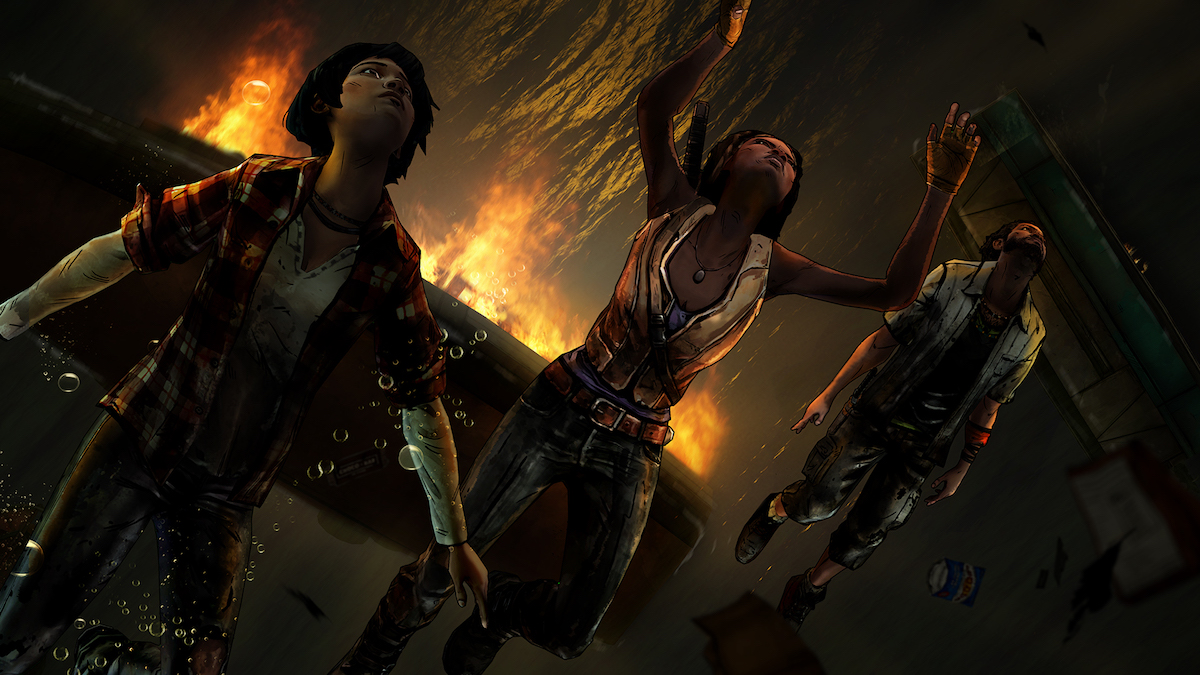 However what keeps "Give No Shelter" from being a perfect episode is its framerate issues. I noticed that when a lot is going on at the same time -- be it a lot of Walkers or a good chunk of people searching for your location -- the game likes to pause its activity for a short amount of time. While the period of pauses was minor it was enough to kick me out of the immersion of the story, and with this game needing that to keep players focused on the tale at hand these hiccups can be a tad distracting.

"Give No Shelter" is Telltale Games doing its best kind of storytelling, where they smile warmly at you whilst giving you the finger as any sort of hassle-free solution goes astray. It's the type of middle-grounded episode that makes you question what will happen next, and with the finale of The Walking Dead: Michonne set to appear at any given moment it would seem that the worst kind of hell for our heroes is about to step on their welcome mat. If I were Michonne, I'd start getting a little bloodthirsty...