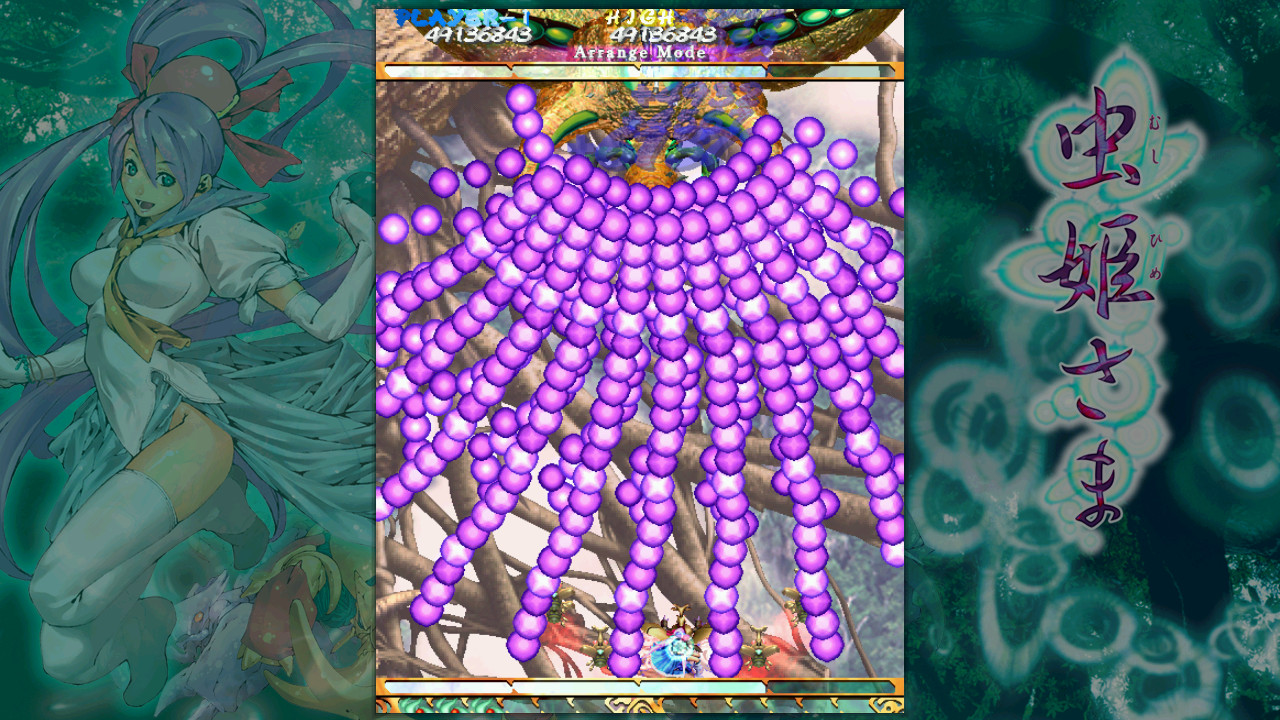 It's been over ten years since the original arcade release of Mushihimesama in 2004. The game has seen multiple ports over the years, going from the PS2 in 2005, the iOS port in 2011, and the Xbox 360 version in 2012. While none of these ports ever made it to the west, the 360 release of its sequel was at least region-free, a rarity when it came to the 360 lineup. Cave obviously knew that Western shmup fans desired the game, but without a publisher to back them it was destined to be an expensive import. Now in 2015 a publisher in the form of Degica Games has answered the call by putting out Cave's backlog of shooters. The first game on the list is Mushihimesama, and the game is literally a hell of a blast!  A Bullet Hell, to be more precise. 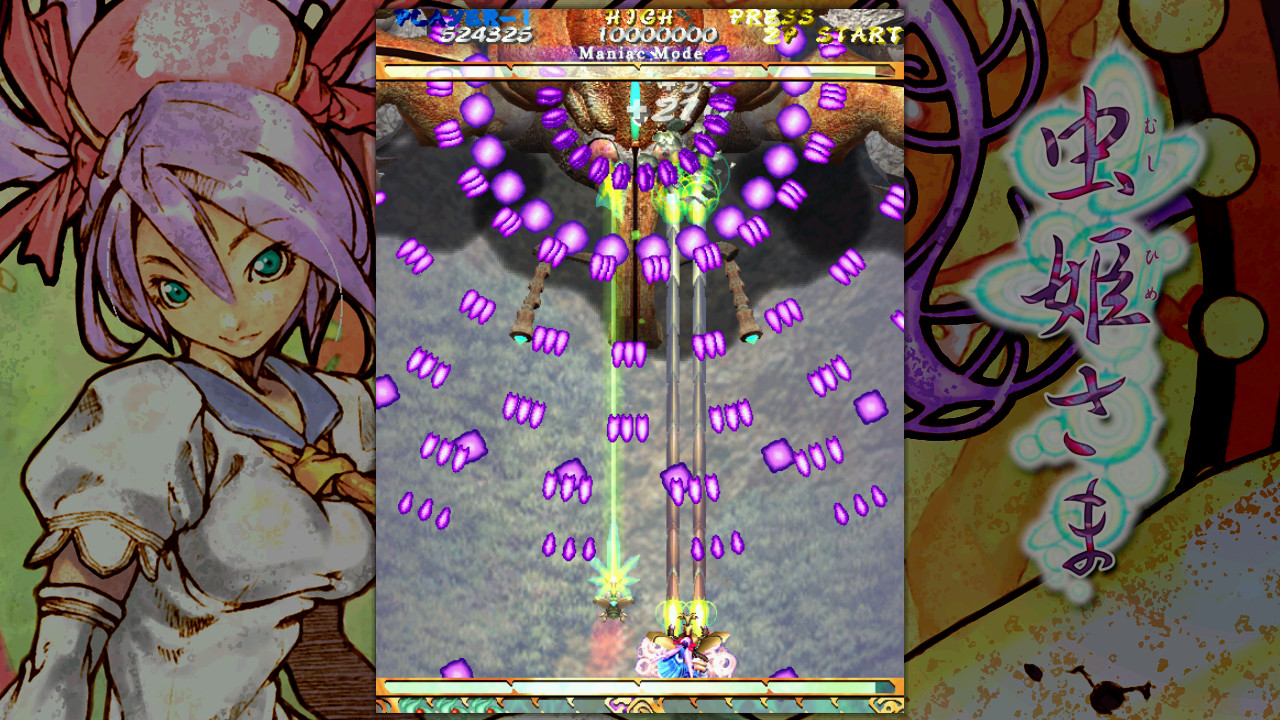 Mushihimesama is a bullet-hell shoot-em-up with a bug theme. The plotline is about a world that's been restored due to a mega-arthropod collection of beings known as Koujuu that allow this to happen. However their presence produces a miasma created from their life-force which is toxic to humans. Some humans have managed to seek refuge from the gas, by sacrificing a 15 year-old maiden every 200 years.

The latest in the line of sacrificial maidens is Reco, who disappeared in the forest as a young girl. There she is given a bracelet by a mysterious boy, as her village finds itself in trouble. Determined to save it she rides atop her golden stag beetle Kiniro (who she shares a telepathic connection to because of said bracelet) to confront the Koujuu God. That's all the plot the game really has aside from its ending, which is not actually within the game itself. 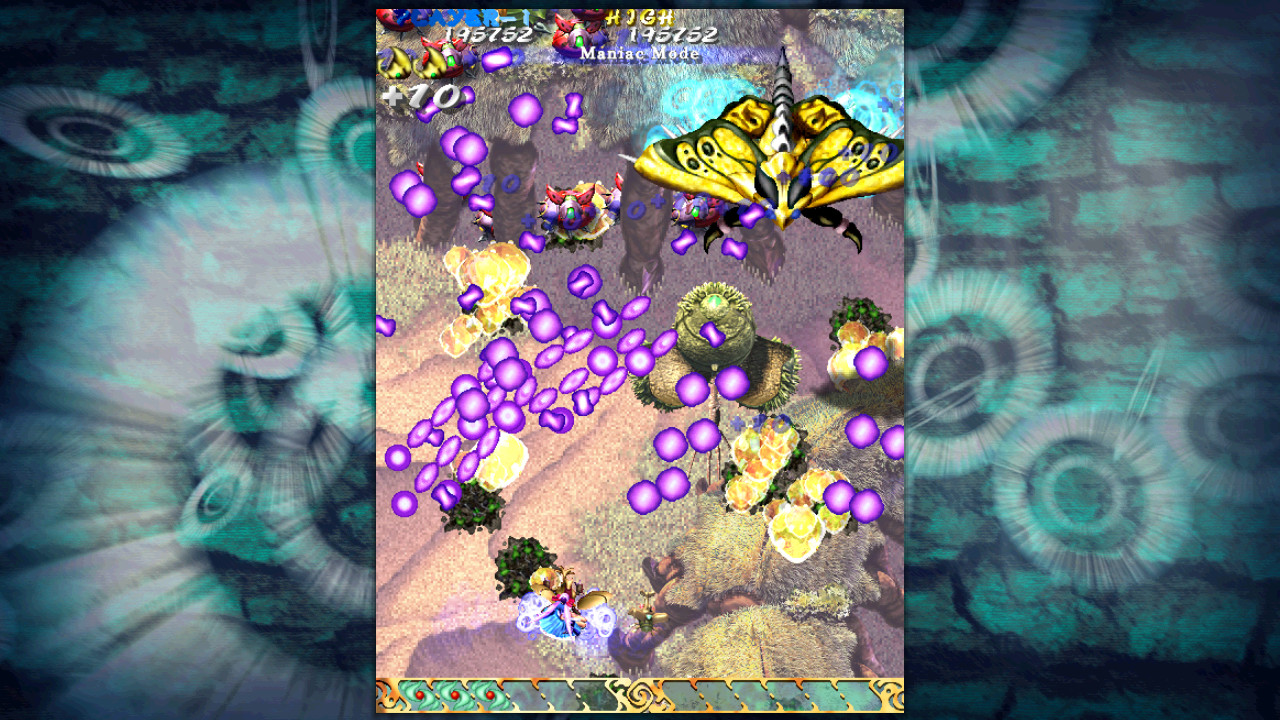 There are a multitude of modes to play the game in, each with multiple layers of difficulty. You can play in Novice, Normal, Arrange, and v1.5 modes. Novice is for beginners of course, and the level of intensity is lower. Normal tries to recreate the difficulty of the arcade version as much as possible. Arrange mode places a lot more emphasis on bullet dodging and is overall a bit tougher, which is likely why you start the game at max power with all the options at your disposable. It also sports a new arranged soundtrack in contrast to the arcade soundtrack. V1.5 is DLC content that's only five dollars, giving off a feeling that's basically similar to playing in Super Street Fighter II Turbo's Turbo mode. There's more to it than that, though, as there's different bullet patterns and enemy placement, along with some new mechanics and a remixed soundtrack to boot.

Once you pick a mode, you'll then be booted into the base game, where you will have three more modes to choose from. Original mode plays more like the arcade original, with the amount of bullets generally being less than the other modes. Maniac is a much harder mode where you will be rewarded with a higher score for evading the large amount of bullets the game will throw at you. Ultra mode, meanwhile, is a step above that, where enemies are even more aggressive and the bullets flow nearly everywhere. 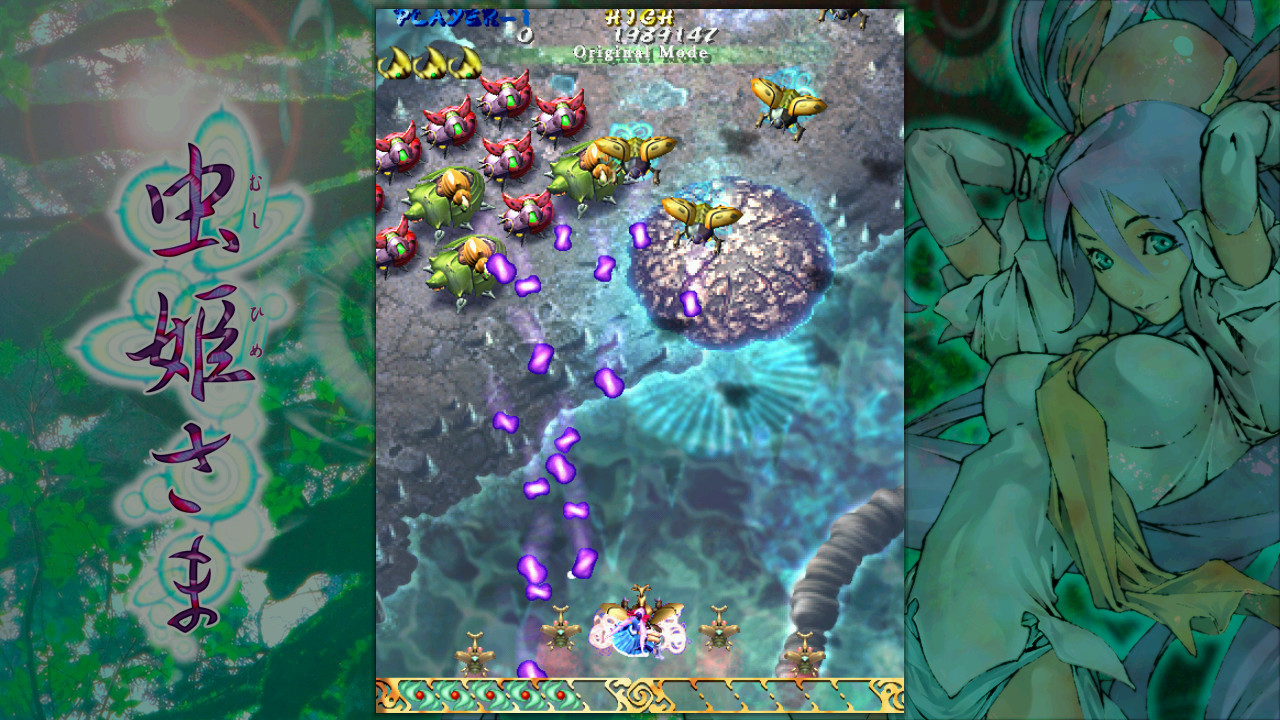 Your only real defense is to weave in-between enemy fire while avoiding getting the hit-box touched. Thankfully you can slow down the game and character movement while the hit-box becomes visible while using the concentrated fire button (or you could use a bomb and erase all incoming bullets to save you in a pinch). On Arrange and v1.5 you can sacrifice your bombs to take that hit for you, so it's best to use them manually use them until you have one, as they all get used up in the process. There are also options to help you increase your fire power and they come in Trace and Formation varieties which determine where can be deployed. There's also three shot types to play the game with, all which come down to how wide the fully upgraded shots will be. Wider shots equal less power, but more coverage of course.

Mushihimesama is really intense and fun, and the while the real goal is to get high scores and one-credit clearance there are unlimited credits. You can always go back to Training to play specific levels to master it slowly. There's even a way to record your runs and play them back to see what you did wrong to learn how to better improve. It's too bad that you can't download other players runs though, as it might make the online leaderboards more competitive. 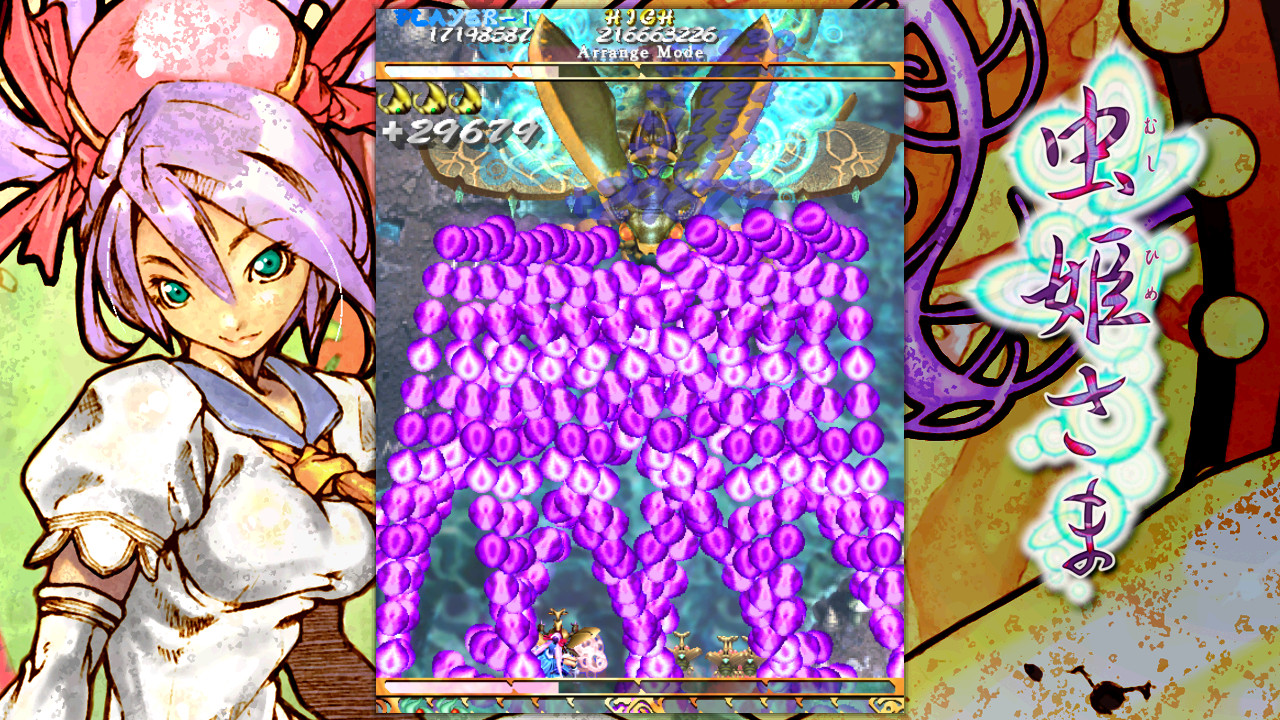 There's currently no way to play the game with the low-res visuals of the original arcade game for old school purists, though. At least the HD visuals looks really nice, and make the intricate enemy designs stand out. The soundtracks are all great too, but the v1.5 soundtracks sound terribly compressed for some reason. It's a really good package, and any shmup fan worth their salt shouldn't mind paying the twenty-dollar price point.

The Good – The shooting action in this game is intense, but it helps that you can slow down the action and see the hit-box with the concentrated fire button.
The Bad – No unlockable gallery stuff to incentivize playing more is a small bummer.
The Ugly – Try playing version 1.5 DLC on Ultra mode with the difficulty cranked to max.

SUMMARY: The original bug blasting bullet hell shmup Mushihimesama makes its appearance on PC, and it's a faithful port that will provide a good time for fans of the genre.