HomeAnimeANIME REVIEW | "If Her Flag Breaks" Flies Steadily In The Wind

ANIME REVIEW | "If Her Flag Breaks" Flies Steadily In The Wind 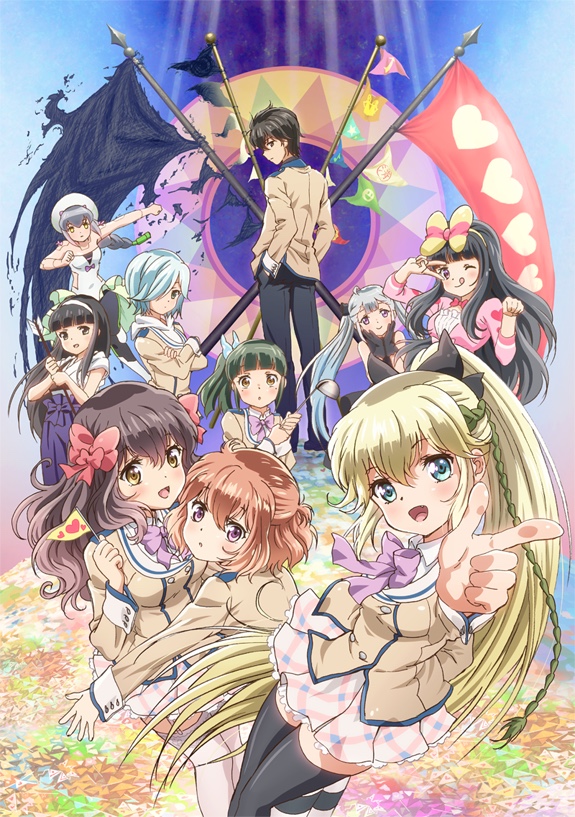 ANIME REVIEW | "If Her Flag Breaks" Flies Steadily In The Wind

If Her Flag Breaks is a perplexing anime to categorize. It's not a romantic comedy, despite the number of girls that come to coo over the male protagonist, and it's too light-hearted to be considered a drama. It's almost a slice-of-life, until it dives into the fantasy genre a bit too much to consider placing it with that genre. In fact If Her Flag Breaks tries to dip its toe into almost every anime genre imaginable. Sometimes it succeeds, whereas other times it barely manages to juggle it all without a few stumbles.

Based on Touka Takei's light novel series If Her Flag Breaks focuses on Sota Hatate (Ryota Osaka), a transfer student at Hatagaya Academy. His ability to see a person's "flag" can either hurt or hinder their fate in the long run, but after years of isolation he tends to push people away and tread this world by his lonesome. However his new classmate and literal royal pain Nanami Bladefield (Ibuki Kido) forcefully comes to his side, and lacking a "flag" she becomes the first person in Sota's life he can be accustomed to. 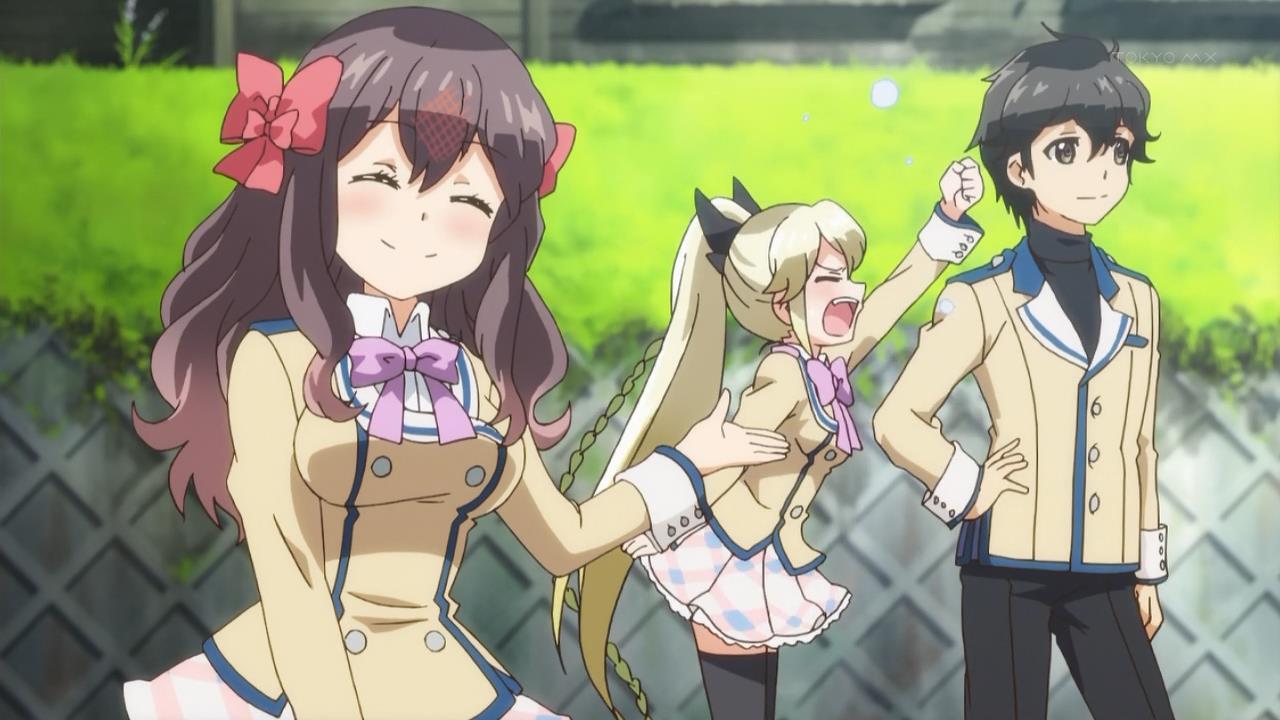 Of course the duo slowly becomes a trio in the form of the overtly positive Akane Mahogasawa (Ai Kayano), then a quartet thanks to childhood friend Kikuno Shokanji (Kana Asumi), and finally a quintet with the addition of the ridiculously androgynous male friend Megumu Tozokuyama (Kana Hanazawa). Sota's new friends move in with him at Quest Dorm, which gets a nice remodeling after some help from other classmates, and all appears fine. That is, until it's revealed that a Death Flag hovers over Sota, one that's so powerful that he himself cannot find a way to break it. Soon he finds that his purpose in life is far greater than an average person can shoulder, which leads him on a search to seek out a specific group of people that can help change his fate.

For the most part If Her Flag Breaks pulls off its comedic chops fairly well, and for a show that seemingly wanted to dive into the harem realm it surprisingly manages to avoid almost every trope that comes with that sub-genre. The reason for that is simple: there's no actual romantic feelings between Sota and all the other characters. They're actually there to help get him out of his rut and keep him happy, and while they tend to act like goofballs around him if he gives the right compliment or hugs them in a way they still see him as a close friend whose presence they cherish. Because of this, the comedy is more in the usual friendly jab or slapstick approach. 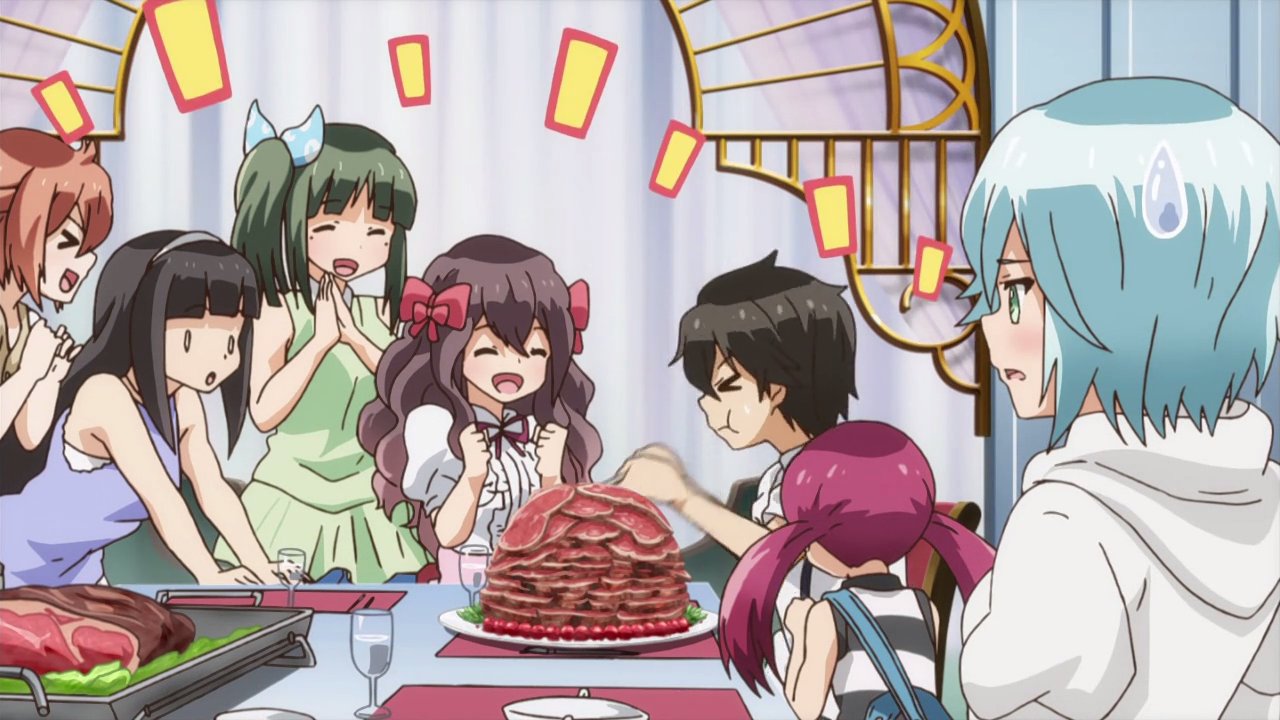 One of the funniest gags in the show involves Sota and the character Rin Eiyuzaki (Yoko Hikasa). In Episode Three Rin tells Sota of a childhood pal she referred to as "Soda," whose friendship she cherished dearly. The punchline here is too good to spoil, but let's just say a surprise is in store for her towards the end. A running gag that doesn't work as well as it wants to is Megumu always being mistaken for a girl. While it gets a laugh here and there, it doesn't reach the side-splitting levels that were accomplished with the character of Hideyoshi in Baka & Test: Summon the Beasts.

If Her Flag Breaks can switch to drama without any warning rather quickly, as you see Sota's tragic back story involving a wrecked ship and the general public scorning him for being the only survivor. He finds that the heavy guilt is tied to his "flag" and abilities, the latter of which given to a young passenger named Sakura (Rina Hidaka). A masked woman only known as No. 0 (Risa Taneda) appears here and there to push him towards leaving the world he currently resides in, as it turns out his actions seem to be affecting various alternate worlds. 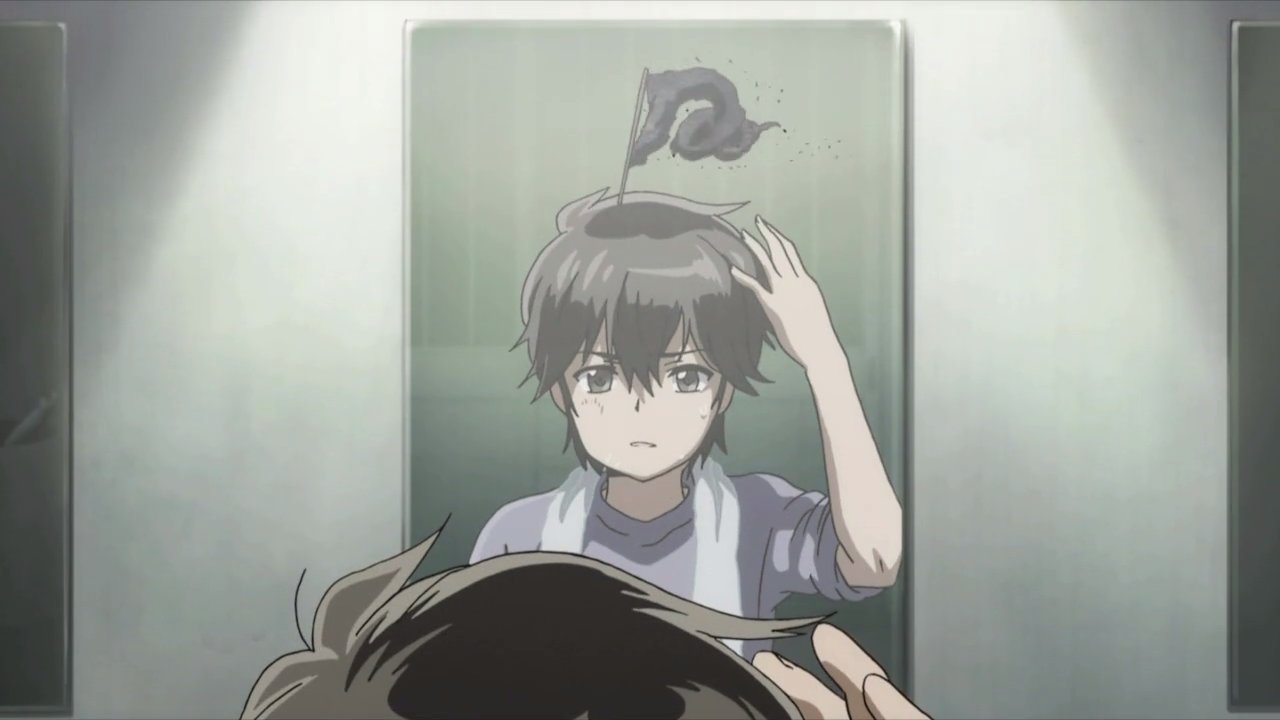 I'll be blunt: the show can get pretty complicated when it deals with some of the more darker aspects of the story. It's not that it doesn't work, it's more that some of the things this anime will suddenly throw at you take some time to digest. Let's just say that this is a series where a marathon viewing is not recommended, as the plot twists may leave you shaking your head in confusion. However it's not until the final episode where absolutely everything comes clear, even showing how the residents of Quest Dorm are truly linked with one another.

Animated by Hoods Entertainment (The Qwaser of Stigmata) If Her Flag Breaks brings forth a nice foray of color and detail to the worlds and characters, especially in a later episode taking place in Nanami's Bladefield kingdom. The Sports Festival episodes showcased a plethora of great physical comedy animated with a lively mentality that's needed to get viewers riled up and rooting for Quest Dorm. However I did notice some lazy corners being cut in character animation later on, one that was very noticeable during a performance scene involving pop idol Serika (Aoi Yuuki). As she sang, her backing band simply stood there, almost looking like dummy props than actual people. Maybe I'm just nitpicking but if you're gonna have a concert scene, at least have the idol's bandmates move about like real musicians do, not standing around like a bunch of statues. 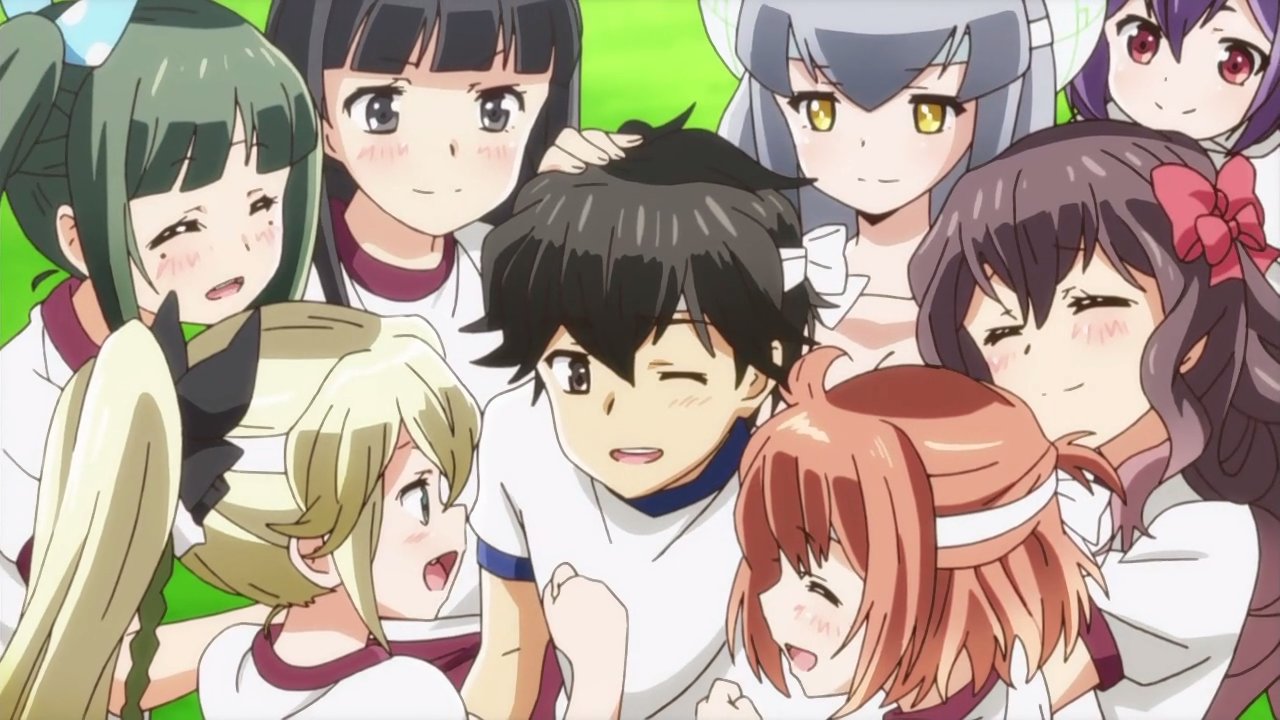 The voice acting is superb for the most part, with Osaka and Kido teaming up well as the main friendship of Sota and Nanami. It's a dynamic that feels more buddy-buddy than lovey-dovey, which would've made things more awkward towards the end of the series. Kayano is adorably funny as Akane, with her "flags" spouting out different friendly personalities that reveal a different layer of cutesy attitude hiding underneath. The duo of Yukari Hashimoto (Golden Time, Seiyu's Life!) and Ruka Kawada (Senran Kagura, Is the order a rabbit?) are responsible for the anime's score, which balances between a fun mentality for the sillier parts of the show and the darker melodies for the more dramatic aspects.

In regards to Extras, the Blu-Ray is lacking anything noteworthy besides the usual credit-less openings & endings and Japanese commercials. The physical Guidebook, on the other hand, contains a plethora of tidbits, original sketches, and interviews with the cast and crew of the anime. Another fun bonus are the manga-drawn recording sessions, where certain cast trivia and line kerfuffles are revealed in a seemingly more entertaining manner. Sadly one thing that is missing here is the recent Christmas OVA, but given that those have to be licensed separately for reasons unknown perhaps we may see it arrive overseas in some shape or form. 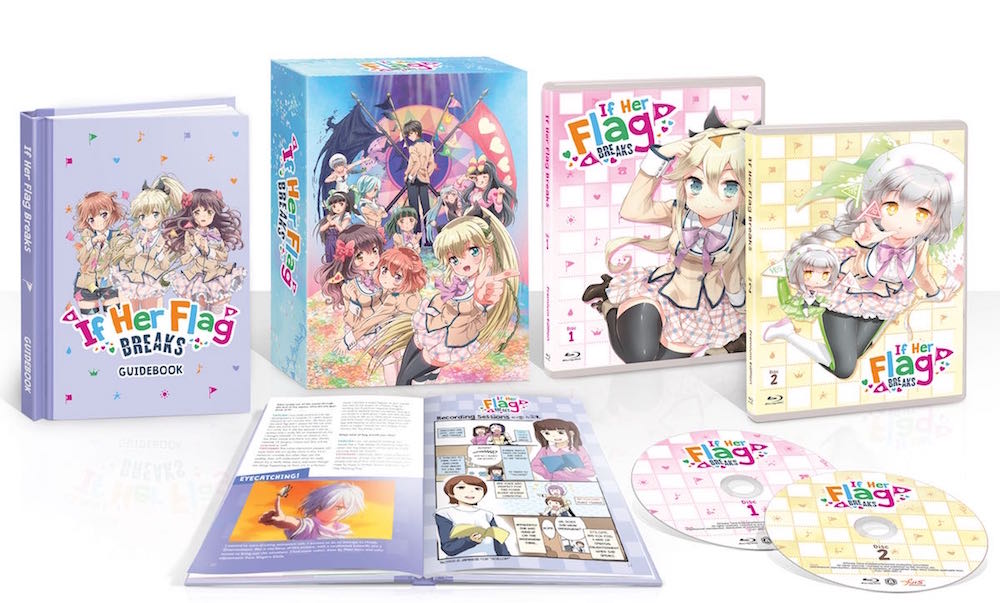 If Her Flag Breaks takes awhile to switch into full gear, as it runs through rom-com roads with several dramatic-filled speed bumps, until it reaches the show's true apocalyptic intentions. However for what it's worth the anime does a great job at keeping the viewers' interests with its likable characters and interesting storylines. It may not resonate with everyone, but if you are in the mood for a light comedic romp with some semi-dark undertones, then If Her Flag Breaks will certainly get you waving uncontrollably with joy.