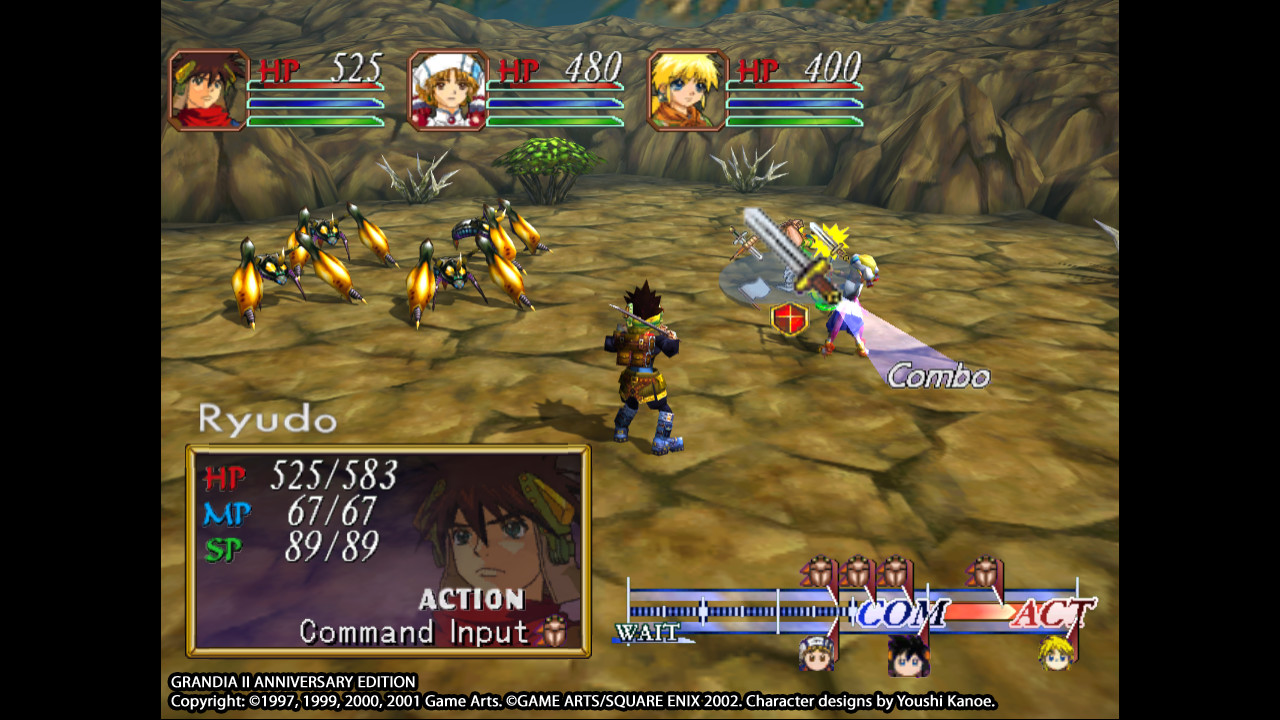 It's been a really long time since there's been any kind of Grandia game release in the West, let alone worldwide. While Grandia II was released originally back on the Dreamcast, it has been ported to the PS2 and PC. The PS2 version had massive framerate issues with some graphical and crashing bugs, and PC version had some graphical issues with some terrible FMV compression. Strangely enough the title has never has been put on Steam...until now! GungHo Online America finally has put Grandia II on Steam with new enhancements. Although these enhancements are slight, the question of whether or not the game still plays well needs to be answered. 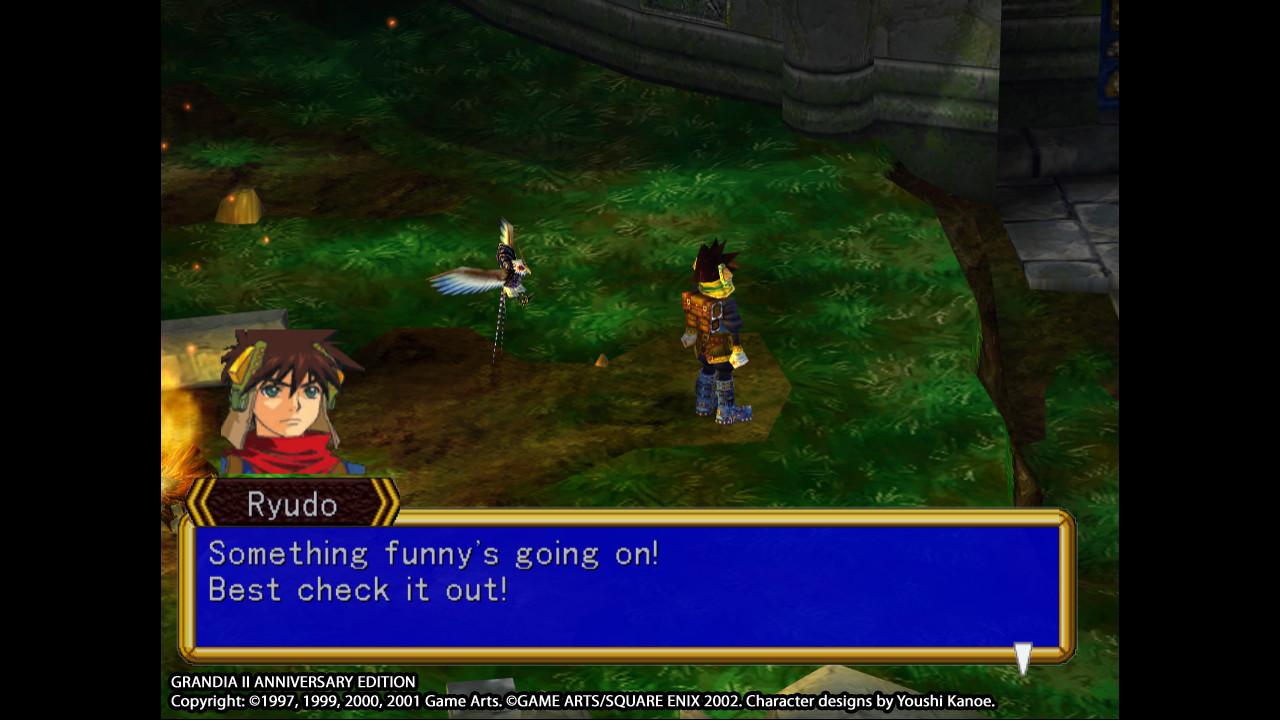 For those who've never played Grandia II, the story is a about a young man named Ryudo, who is a bounty hunter called a Geohound. While returning from a successful job, he gets a new task to protect and escort a songstress named Elena to a Tower to perform a ceremony to strengthen the seal on the pieces of Valmar. Valmar was the god of Darkness in ancient times, but wasn't completely destroyed. Of course the ritual is disrupted and all hell breaks loose, causing the Wings of Valmar within Elena to become free.

Occasionally it manifests as a woman named Millenia, who now shares a body with Elena. It's a pretty roundabout way of introducing a character with a multiple-personally disorder, but I'll take it. The two agree to go to the Church of Granas to find a way to reseal the Wings of Valmar or -- at the very least -- prevent its presence from eventually killing Elena, while dealing with the other pieces of Valmar along the way. The game's story was pretty clichéd even back then, but the character interactions, music and battle system give the player reason to stick with it. 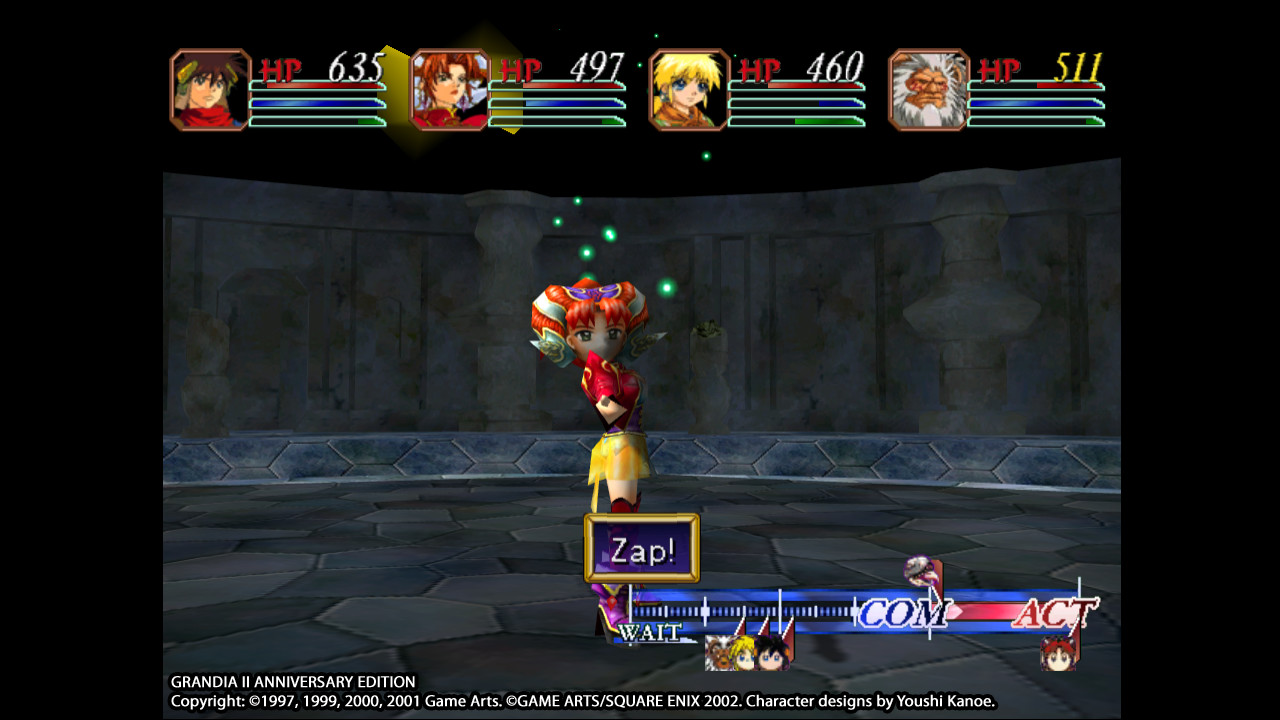 Speaking of the combat, it's a further evolution of Grandia's battle system. Combat is a weird hybrid of turn-based and real-time, where character icons slide along a meter between wait and act modes. While waiting for a character's turn, they'll move around the map. Once they go into act, the game pauses and you can take your time selecting your course of action. The interesting thing is that if an enemy in in Act mode, you can prevent there attack by using critical strikes or action-canceling skills. (Of course, the enemy can do this to you as well.) One other option is to use a quick-hitting combo attack to counter theirs, assuming your character is quicker than them, but otherwise defending is the way to go. Imagine that: an RPG where defending is actually used often rather occasionally!

Skills use skill points, and magic uses traditional MP. The former is learned by using skill coins or magic coins gained through battle in the Power Up menu. Magic is a bit different, though. First you need a Mana Egg, which have a preset of magic, using the coins to power them up and unlock the rest. However the game has to unlock this feature first. The other mechanic in the game is the skill book system, which lets you use special coins to boost stats depending on the book acquired. Grandia II had a lot of mechanics that would be seen in many other games to different degrees, but its roots lie in games like this. It's a good thing since it still makes for a good game even by today's standards. 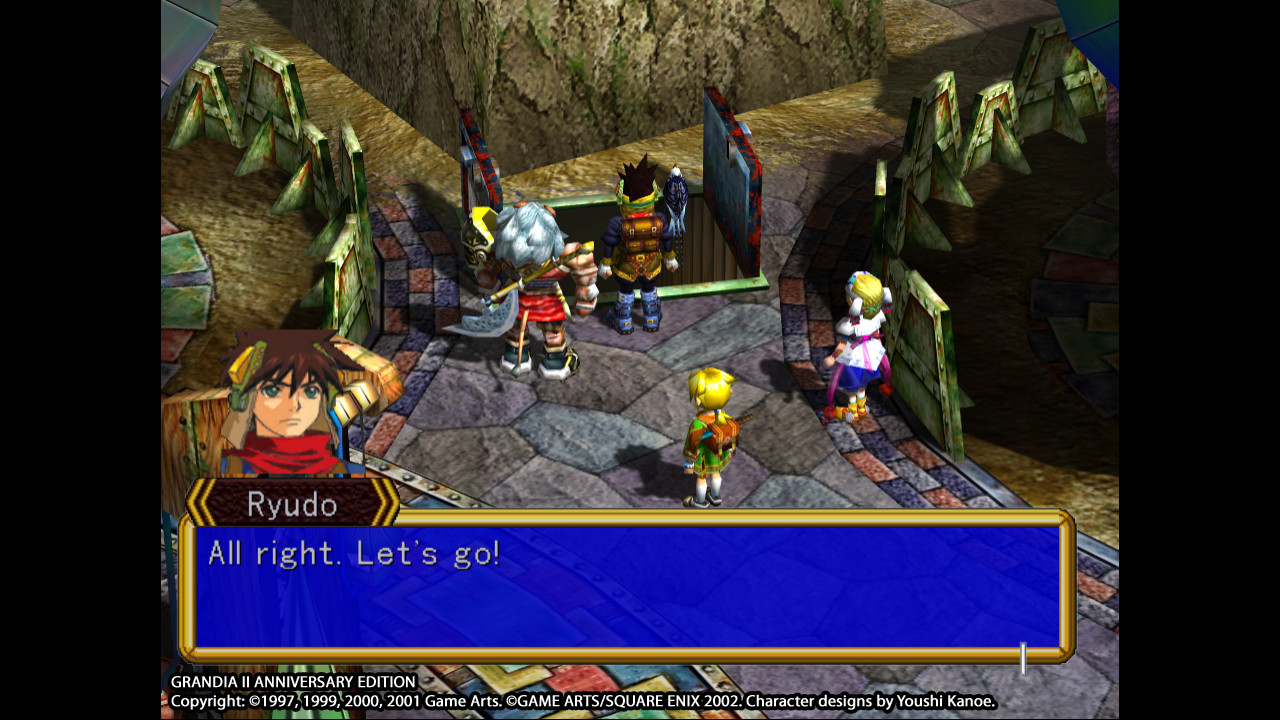 The game's visuals are definitely dated, with this release actually being 15 years since its launch in 2000. It's in the weird period of evolution from the often ugly-looking 3D on the Playstation and Saturn to the blocky but crispy 3D of the Nintendo 64, only on hardware that was a step up from that. It looks nicer, but it's still blocky. The music, on the other hand, was a different story. Noriyuki Iwadare once again delivered an amazing soundtrack, which is solid throughout the adventure. Voice acting, while going with the cheesy dialogue, is much better than the localization that Grandia received. It's acceptable, but definitely a product of its time.

It should be noted that despite the fact that the game has received some enhancements, they are pretty slight. One thing Grandia II can't be accused of is that it's not an HD remaster in the very least. While it did receive a slight visual face-lift, it applies mostly to character models and pretty much nothing else. Menus and character portraits aren't up-ressed, and the environmental textures still are as they were. The only thing that was really done was to keep the game from looking acceptable on the PCs of today. (There are better, unofficial HD mods out there if you know where to look.) 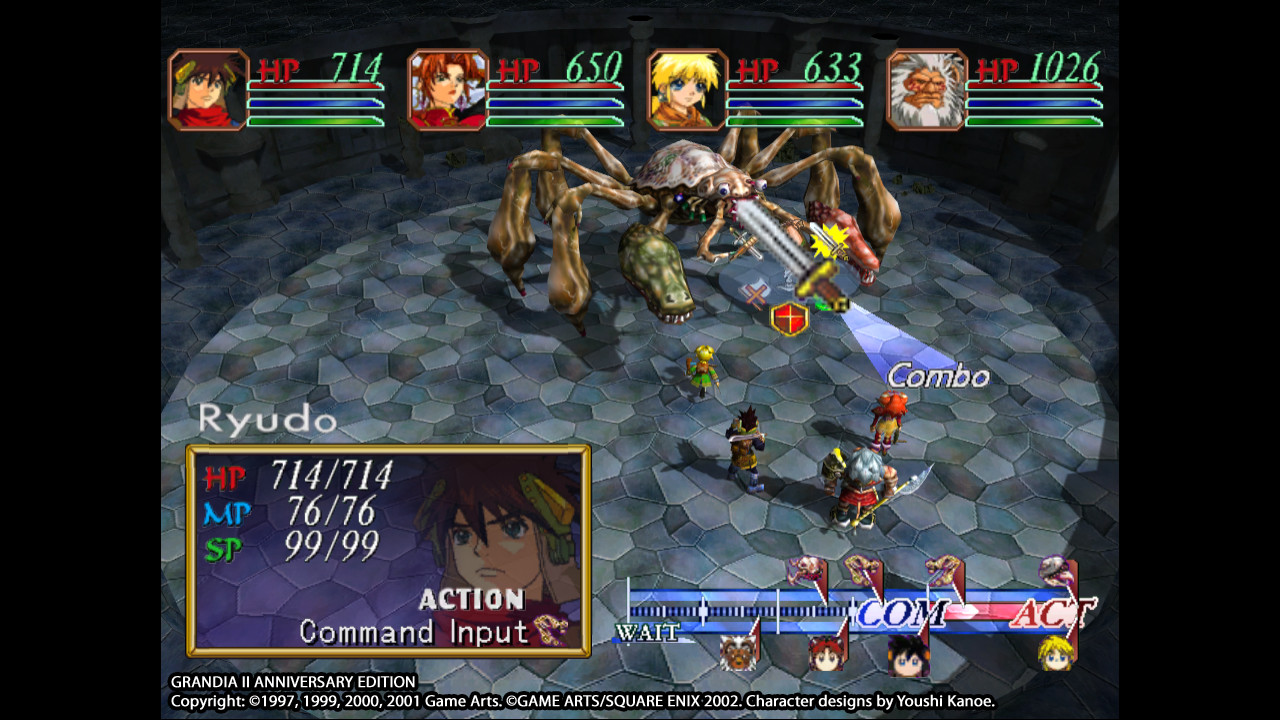 At least two other features are welcome. The first is that there is a new Hard mode for people who thought the original difficulty was too easy, and believe me when I say it is. The other would be that the game now has the ability to be played with the Japanese audio. It's nice to hear the original voice acting in the game and compare it to the English dub done back in 2000. However it's too bad that they can't be toggled in game though, as is your difficulty. What would've been nice is some kind of New Game+ to breeze through replays, or an easy mode for people that really want to relax and enjoy the story. All in all, Grandia II is still a great buy for RPG fans, and a good alternative for those who wanted to play the game but couldn't track down a Dreamcast copy. Plus it's loads better than the other ports the game has received. This is one RPG that won't do you wrong.

The Good – Still a good JRPG to experience despite its age.
The Bad – The translation, while not as bad as Grandia's, is filled with late 90's cheese.
The Ugly – The lack of a New Game+ or Easy Mode to compliment the new Hard Mode.

SUMMARY: The Anniversary Edition of Grandia II is a nice slight remastering of a classic JRPG. While it could have used some more visual polish and possibly a new script, it's still a good alternative to any other port of the game.